The world is split into two types: those who can be put into one of two types, and those who can’t. Well, we split into two groups this morning. I cycled with Si 40-odd miles to the hostel at Dingle to check in, and then do a circuit of the peninsula end; Sue, Paul and Chris went a different way to Dingle, via Dunloe Gap.

And a whole lot of other places, because they missed a shortcut track I’d forgotten to tell them about, and did miles extra as a result. 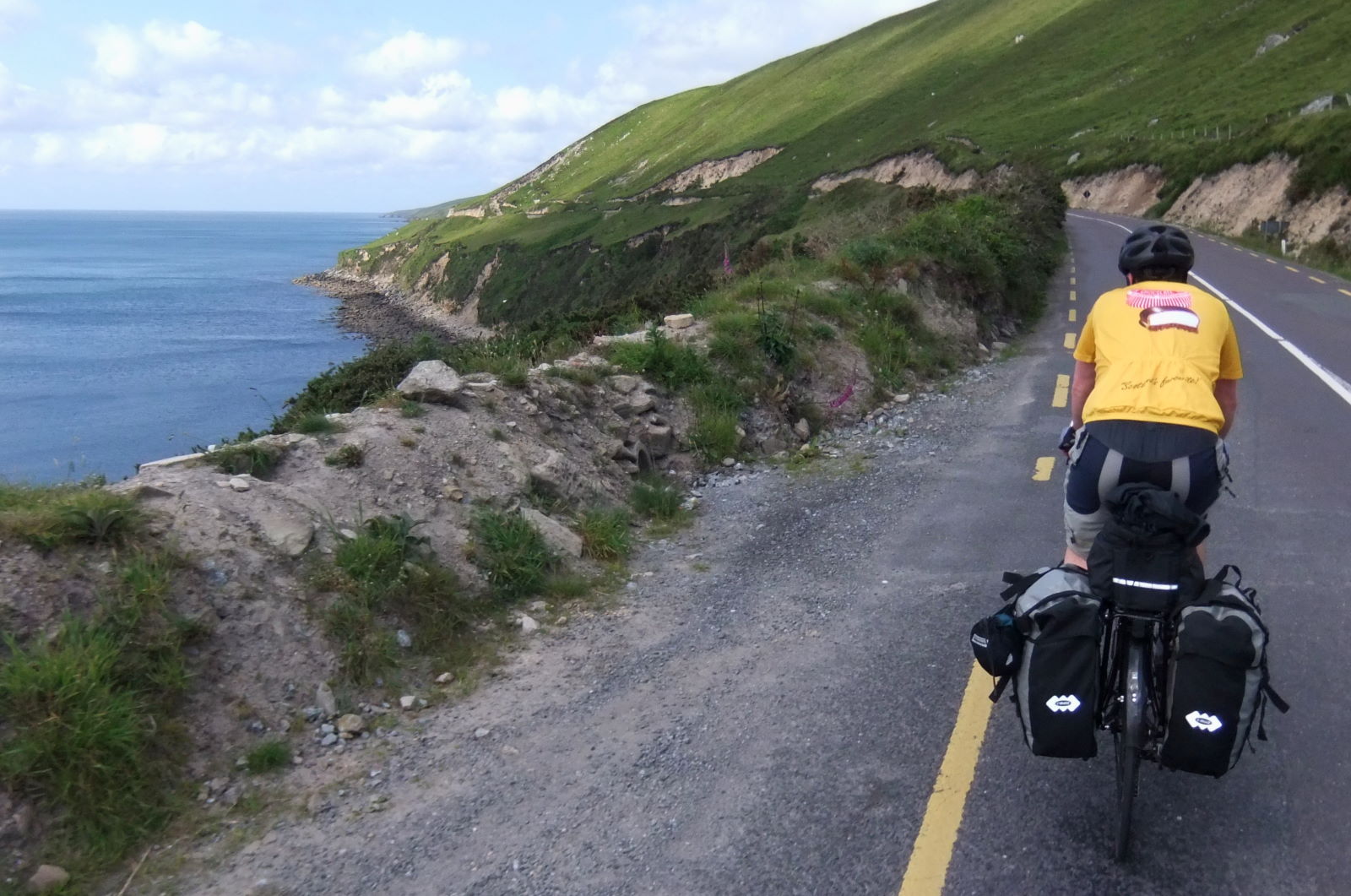 The coast road ride to Dingle for Si and me was very good, with a handy tailwind. We had the Ring of Kerry’s thrilling mountain semiorama across the water to the south on the left, and the green Dales-like hills of Dingle to the north on our right (pic). The sun even came out too.

There wasn’t much afoot at Inch, with its finger of sand poking out into the waters. The swell had been stolen by the northerly, to the disappointment of the surf dudes. They still looked cool, in much the same way that I didn’t. 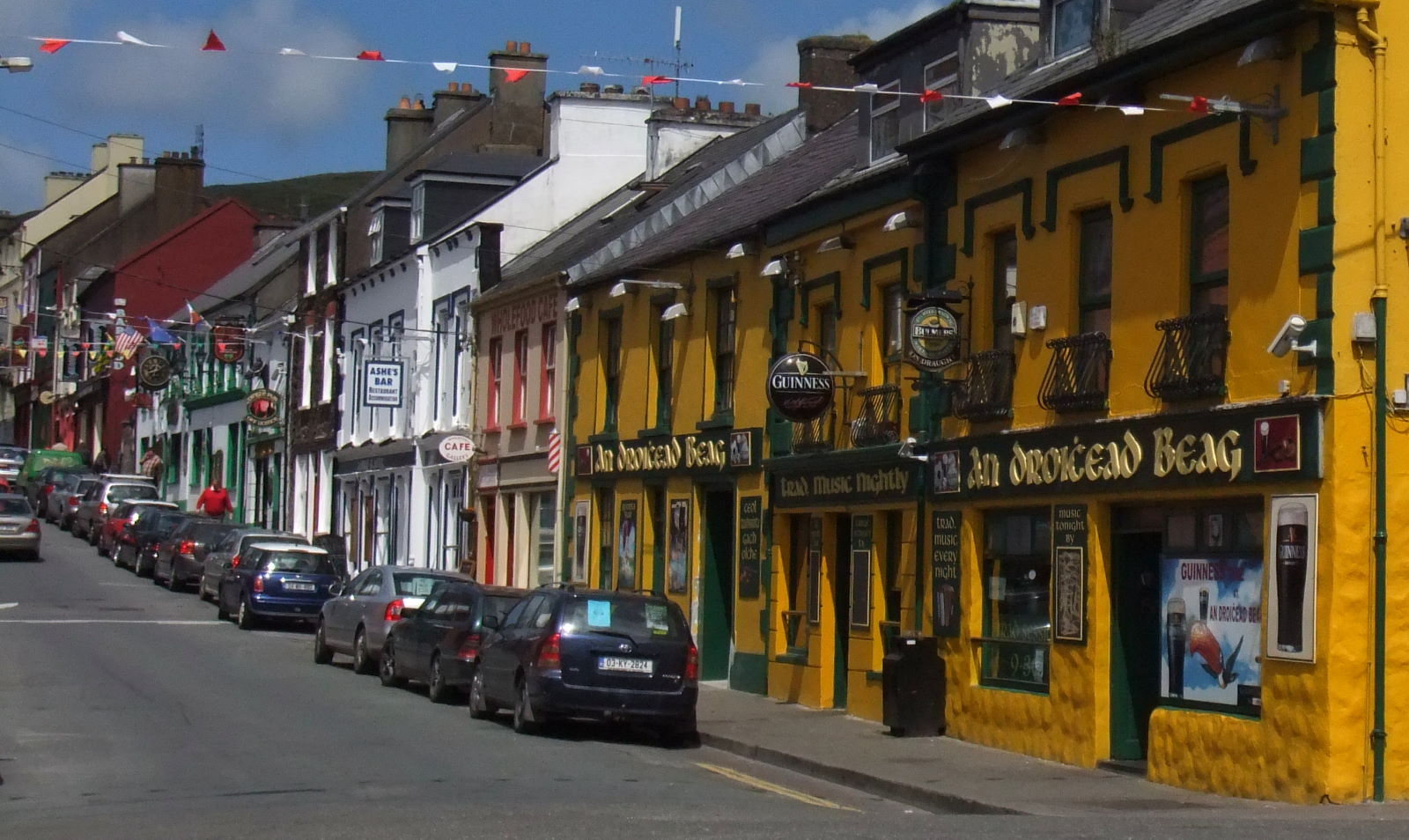 Dingle itself proved a cheery and non-twee harbour town (pic). We checked into the hostel, did a supermarket run, and I did some online admin. And some laundry, a daily necessity given I only have one change of clothes. 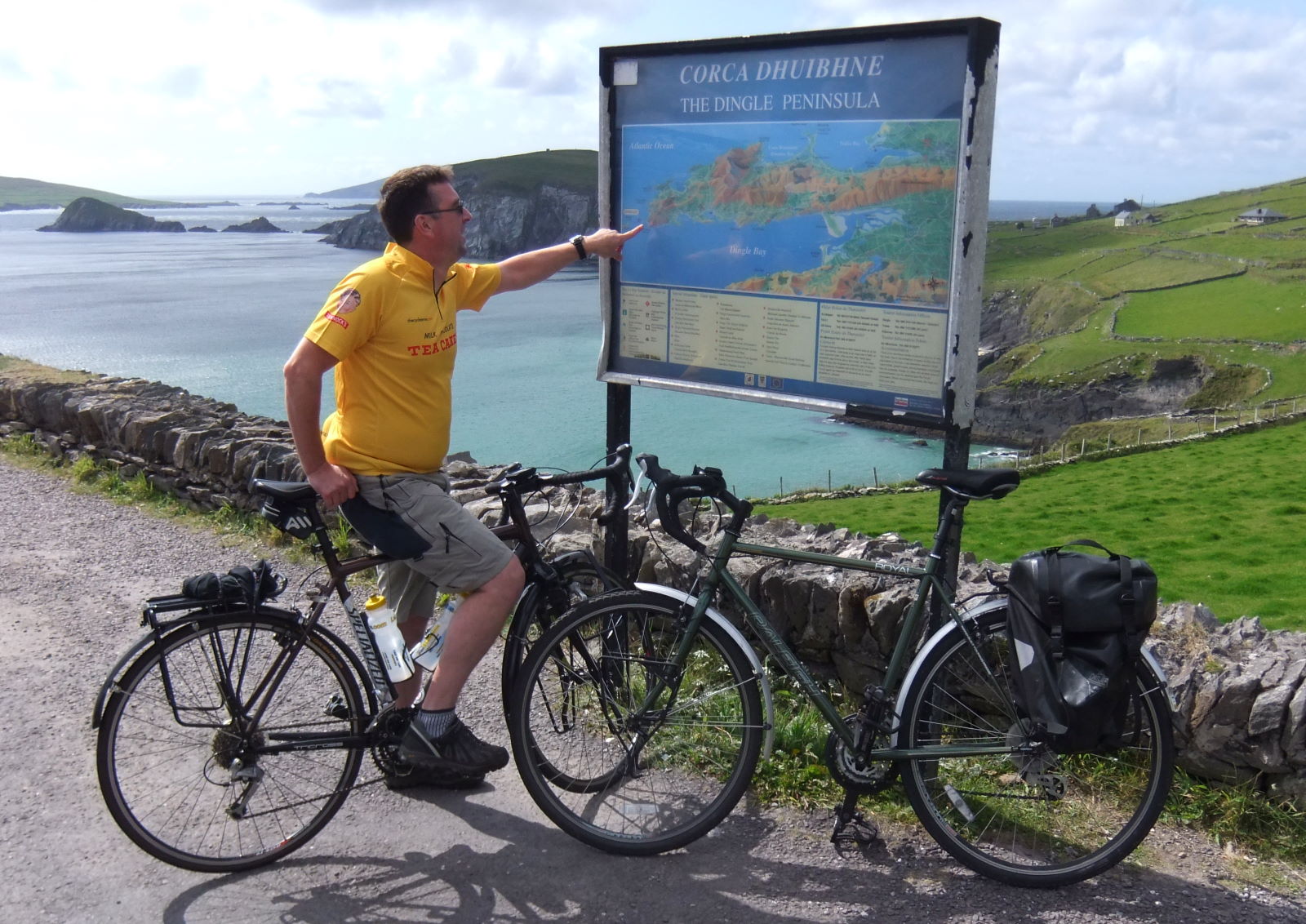 In the afternoon Si and I did a circular jaunt out to the head of the peninsula (pic).

When I was little I thought the shape of Ireland on the map formed the head of an old man looking left. Donegal was his jutting brow, Galway his nostril, the Shannon his mouth. In which case the peninsulas I’ve been doing so far are his beard. And I’m cycling right up his face. Eew.

Anyway, it was all fantastic scenery, lovely dramatic rich coastal stuff in the sun (pic), with the Blaskets craggily off in the blue haze, and Kerry looking like it came off a butter label. And the odd threatening cloud the colour of Guinness. 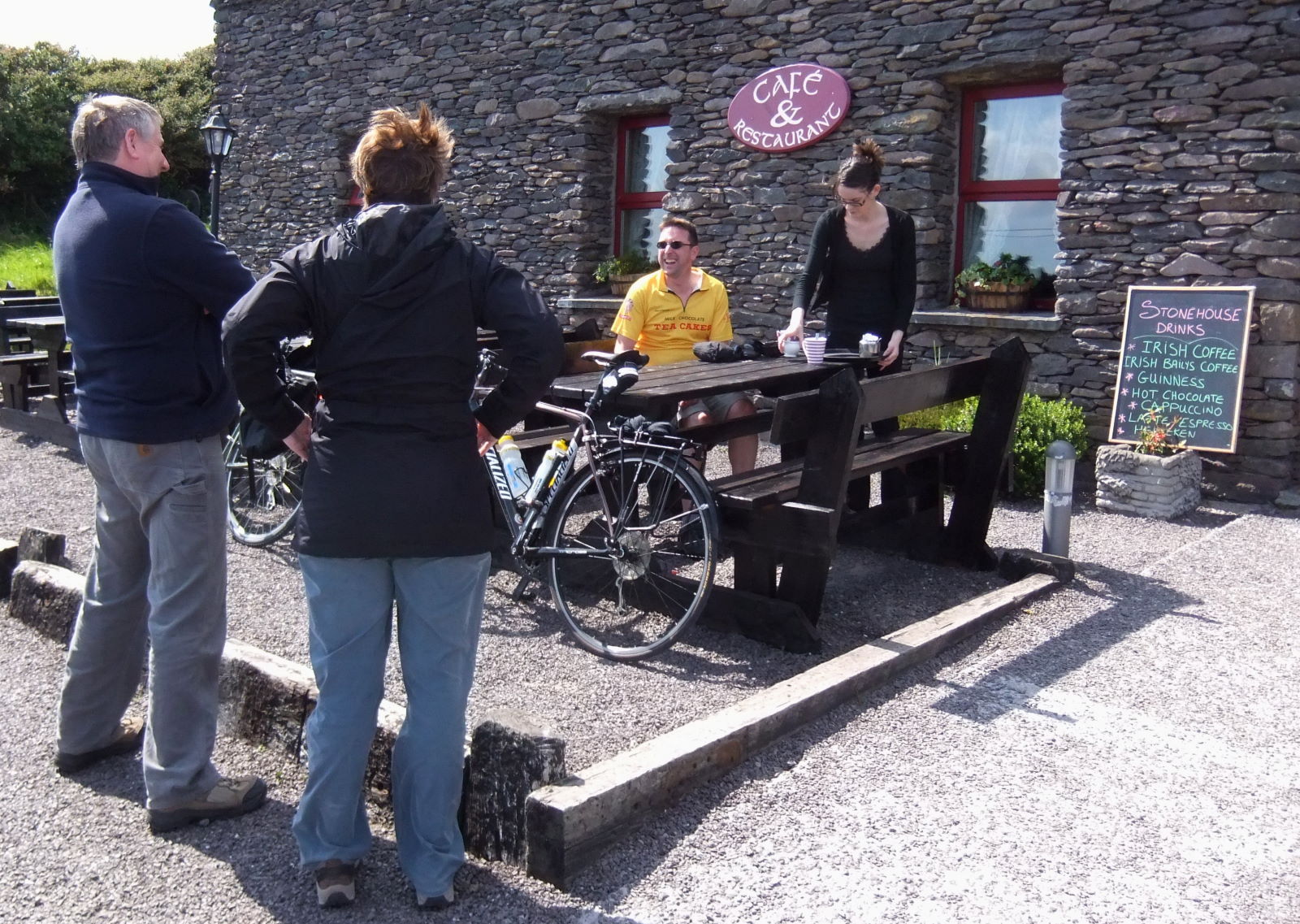 We enjoyed an excellent stop for coffee with view of the waters and mountains, and more chats to locals curious about our bikes (pic). They were more interested in Si’s than mine. They clearly had good taste. 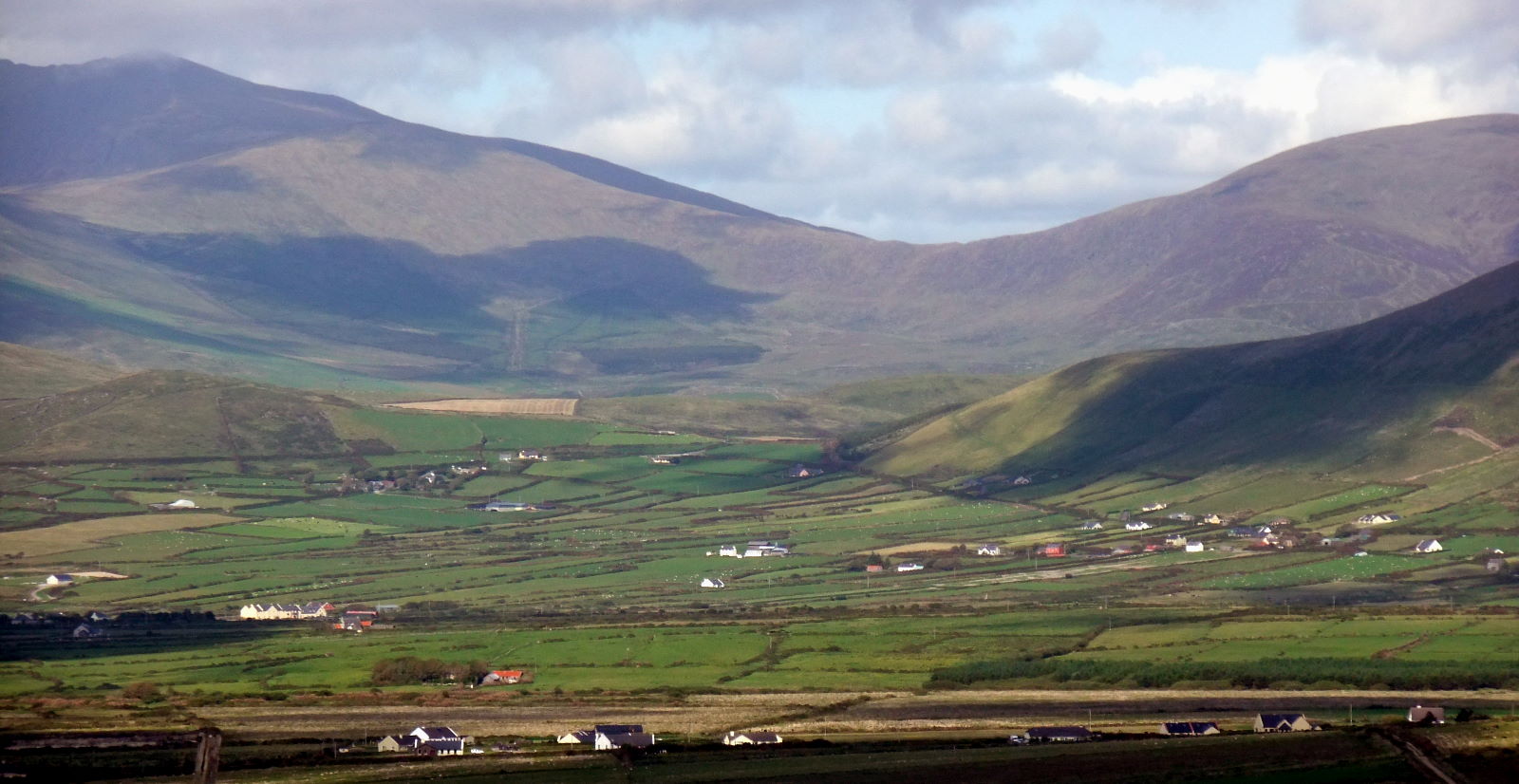 We finished with a struggle into the northerly headwind, and a short cut back over the mountain with lovely views from the top (pic). The hurtle downhill was a long straight delight, with Kerry and the deep blue waters ahead of us, the unfolding lush green valley down on our right.

Dinner in the hostel kitchen – now reunited with the tired others – was another sociable affair, and I had a fine time even though I didn’t have a single drink. I stuck to doubles.