Excitement in the morning. A slow-talking Irish bloke came in to the hostel to ask uncertainly for help. He was camping in the hostel garden, but some campers’ tents had been invaded by drunks who wouldn’t leave.

Of course I volunteered to help out immediately. I put the kettle on and started making some tea for everyone.

Then I realised I’d actually have to join the small militia of hostellers forming to tackle the incursion, and pretend I wasn’t scared of a physical encounter.

We didn’t look intimidating though. There was me, the Irish bloke, a Christopher Biggins lookalike with a dodgy eye, and a French hiker who spoke no English. And the warden, who was carrying a notebook, perhaps for evidence at the inquest. 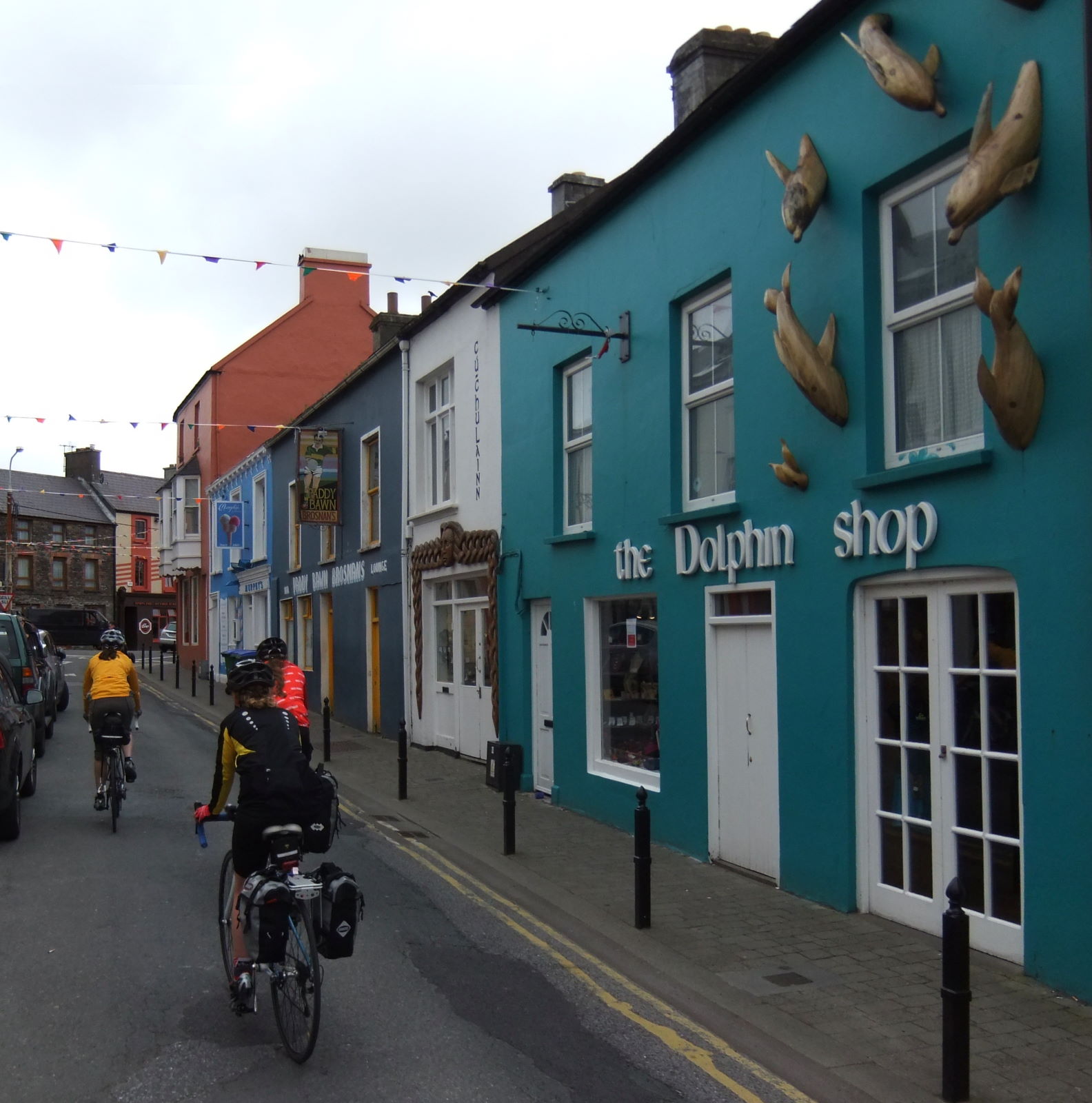 In fact, the incident resolved itself quickly and with no fuss. The apparently scary gatecrashers were four or five lads in their twenties who were hoping to find somewhere to kip for an hour en route home from a very extended pub session.

They left with token verbal resistance, and we returned to the hostel kitchen for breakfast feeling brave and strong*.

Right. We had some cycling to do. A big tailwind scooped us along through Dingle town (pic)… 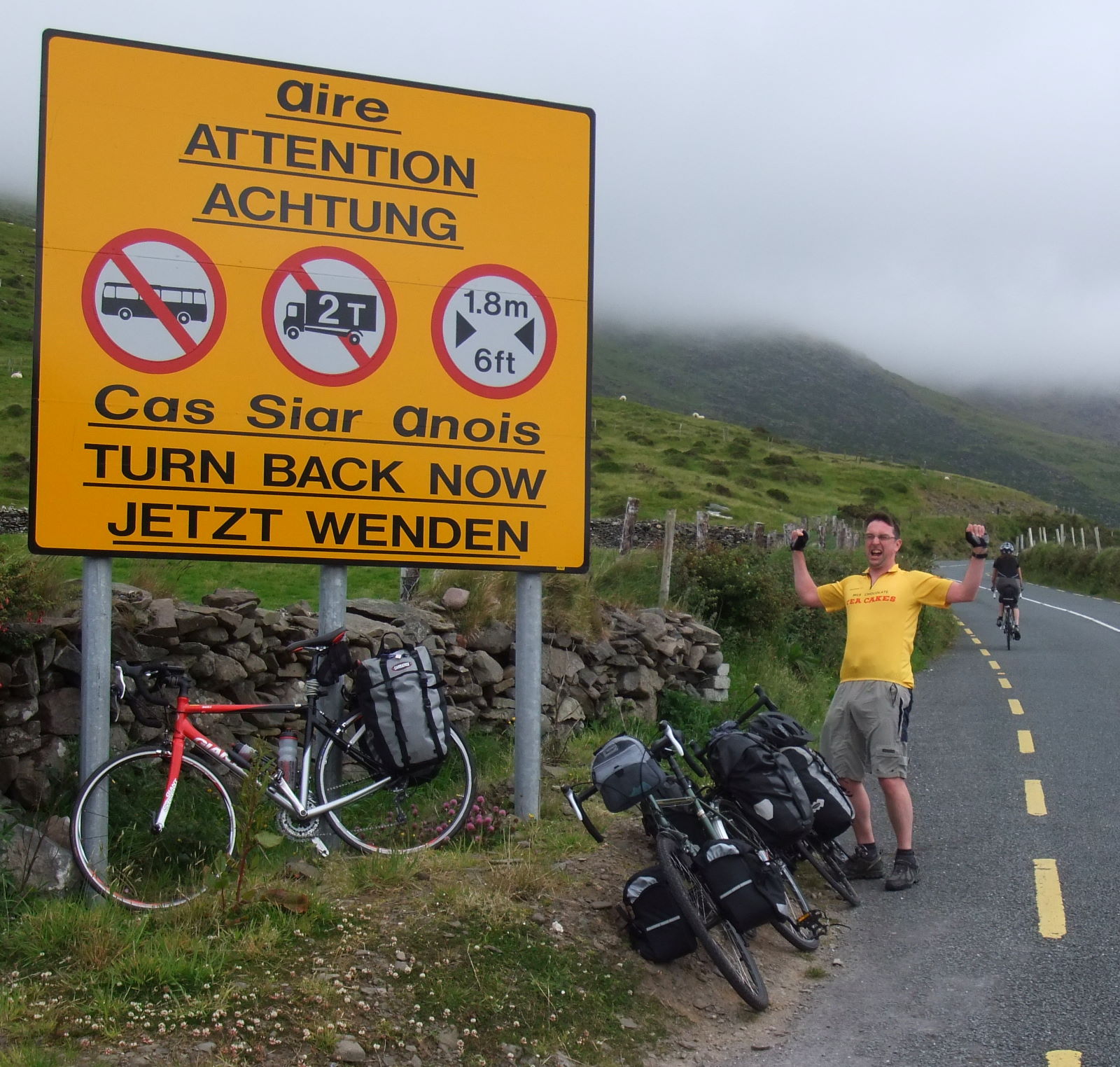 …and up the long climb of Connor Pass (pic) and briskly down the other side.

It was overcast and gloomy all day. We saw little of the scenery but a lot of mist and cloud. The only colours to be seen were brown, grey, green, greeny-brown, grey-green, a browny kind of grey, and a sort of intermediate shade between green, grey and brown. 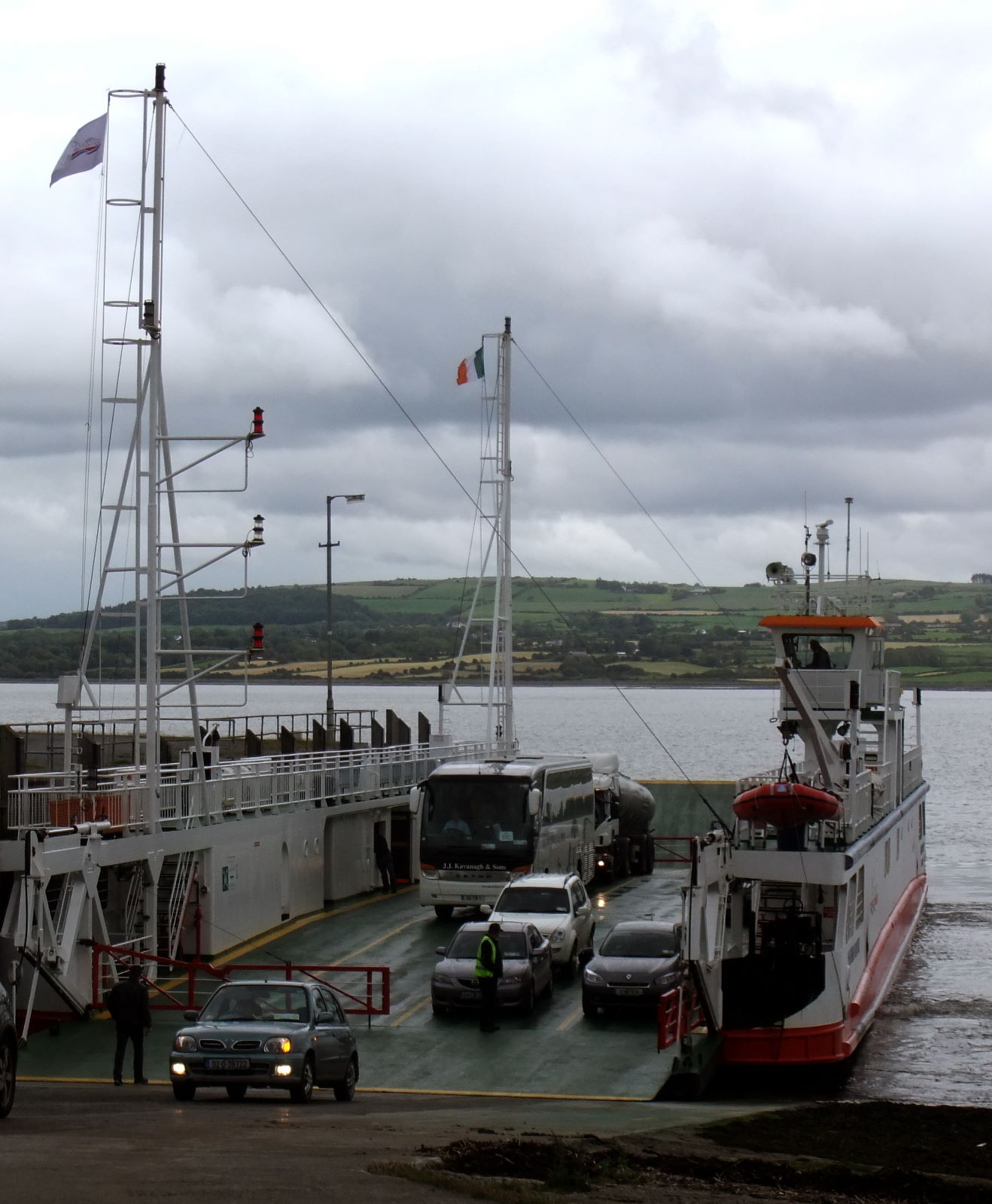 Elevenses was a supermarket coffee and muffin in Tralee, and we did at least get some entertainment in the afternoon: the car ferry across the Shannon (pic).

At 224 miles long it’s slightly longer than anything in Britain – the Severn is 220, the Thames 215. Lengths are arguable, though, because it’s hard to say where the river ends and the estuary begins in all that mist.

Indeed, the scenery here put me in mind of the Tilbury-Gravesend Ferry, but I soon recovered. 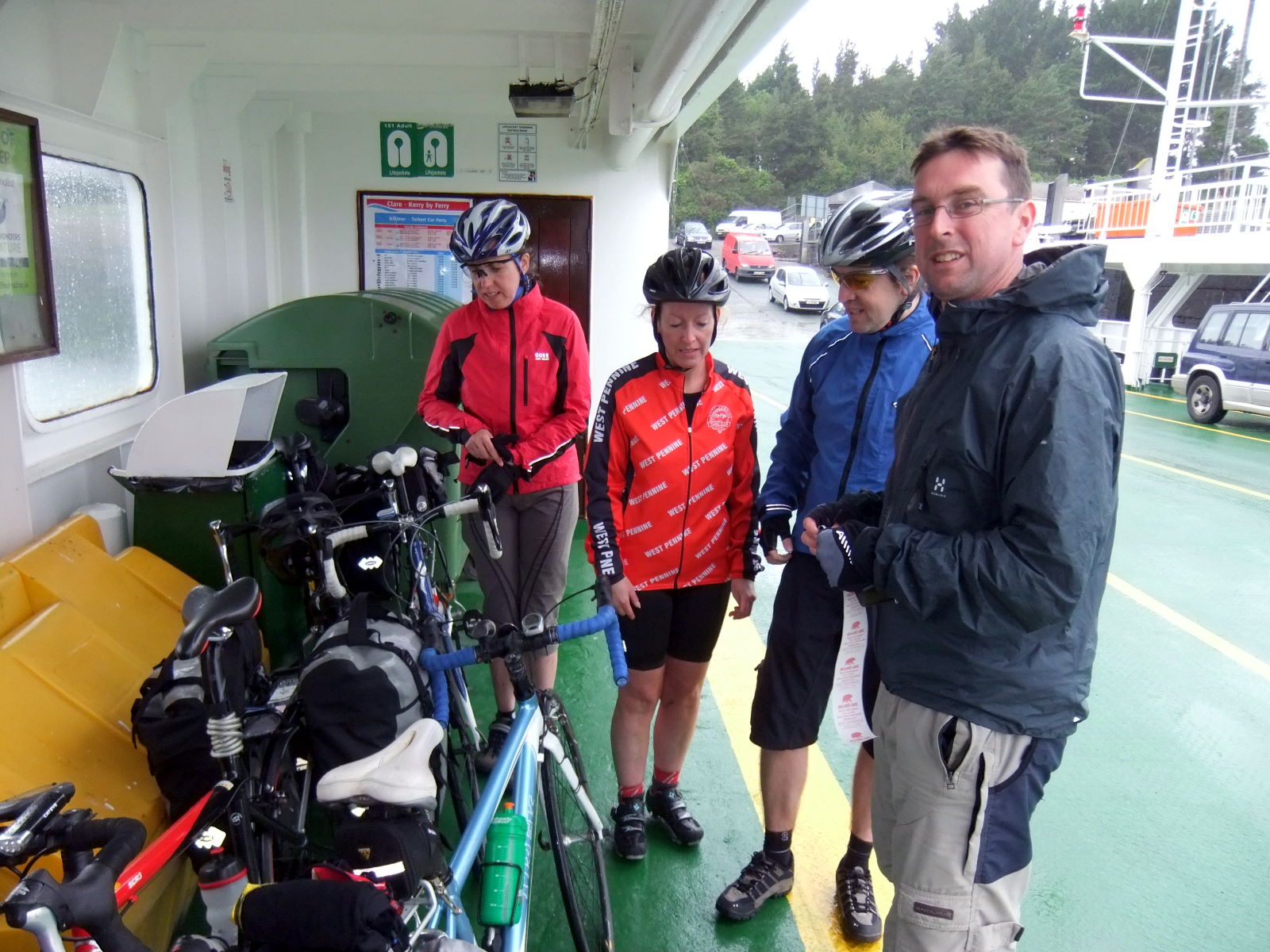 So, we were happy in the knowledge that Kilrush was only five miles from here (pic), and arrived in the main square at our accomm, Crotty’s pub, just as the rain started in earnest. As James Joyce said in Finnegans Wake:

‘Elsewere there here no concern of the Guinnesses. But only the ruining of the rain has heard. Estout pourporteral! Cracklings cricked. A human pest cycling (pist!) and recycling (past!) about the sledgy streets, here he was (pust!) again!’

No, I haven’t much idea what he was on about, either. But he was A Genius.

Well, Mark turned up to join us, sneaking a couple of days away from work over here, we all rendezvoused in the bar, and the evening in the pub ran away from us in a way we conspired to allow. Cracklings cricked enjoyably, and we may have got a little bit pust.

Somewhere around half one in the morning, some harmless drunks came to talk to us. They were so full of Guinnesses it was hard to understand a word, but I thought I heard something about them trying unsuccessfully to find a place to sleep last night in a hostel campsite…

* The warden lamented that this sort of thing was pretty common. I’d experienced something similar on the hostel on Clear Island, not far from Mizen Head, in 2000.
Returning to my hostel in the small hours after a convivial pub session, I found my bed occupied by a snoring man. I wandered round the dorms until I found an unoccupied bed and slept there. When I woke I found it was a female-only dorm.
Back at my original bed, the man had disappeared, and all my goods stowed under the bed were intact.
Later that day I bought my ferry ticket back to the mainland and related the story to the kiosk guy. Ah, he said, that was me. I live on the mainland and sometimes miss the last ferry if I’ve been to the pub after work, so I kip in the hostel.
Had it happened in any other country, I would have been outraged by the presumption, lack of security, etc. But in Ireland it just seemed the charming way of things.