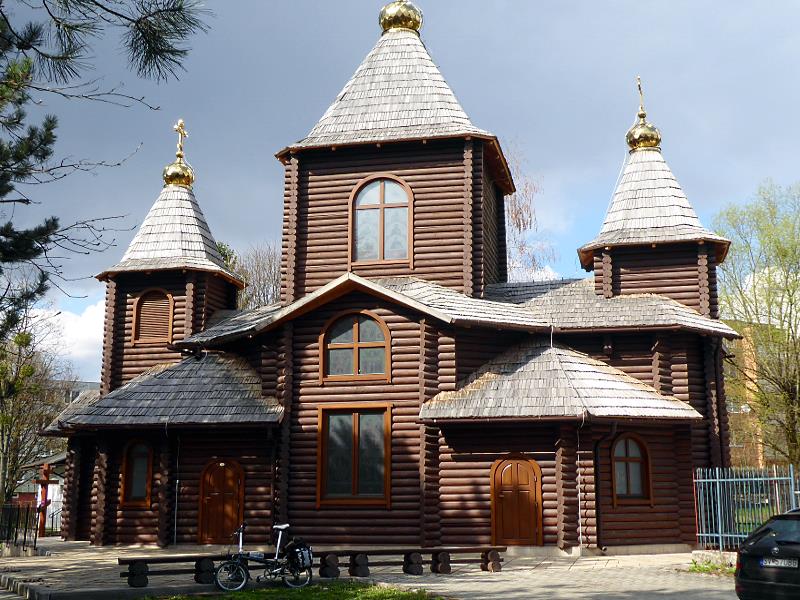 Another short, easy, mostly flat day in scenery that could have been Lowlands Scotland. Especially for the frequency of Co-ops: yes, shops are open again after the Easter break, so I could buy proper food on the go from the ubiquitous village potraviny. After a miserable day of petrol-station crisps and biscuits yesterday, my usual cycle-touring picnic diet – cheese, salami, fresh bread, salad – was like Michelin star cuisine.

I passed yet another of Slovakia’s ruined castles (Wikipedia lists exactly 100 of them in the country) and passed through village after village, mostly on quiet back roads on valley floors. Not too much to stop and photograph, but on a bright if chilly day, the cycling was its own entertainment.

Eastern Slovakia is known for its wooden churches, across all denominations (Catholic and various Orthodoxes). I wanted to see the grand one in the outdoor museum at Humenné, a large town I passed through at lunchtime. It’s one of the finest examples in the country, originally sited in Nová Sedlica, my ultimate destination.

But – despite the promises of its website – the museum was shut. However, I managed to sneak a photo through the fence. This is about as subversive as I get.

More little-trafficked lanes through pleasantly hilly landscapes, and one minor climb, got me to the final downhill into Snina, my modest target for the day. Like Humenné it’s an industrial town with wide modern shopping plazas rather than cobbled historic squares; a sort of Slovakian Stevenage.

Even the ‘age-old’ traditional wooden Orthodox church dates only from 2017: it was trucked over in parts from Ukraine, apparently, and assembled here without nails. It’s annoying when flat-packs have missing parts, isn’t it?

I had a pleasant beer at a pavement cafe in the sunshine amid the shoppers and strollers, and then dawdled to my lakeside hotel out of town, allowing myself the rare treat of dinner in the hotel restaurant.

A modest day, but all rather nice. Often cycle touring is simply about that.