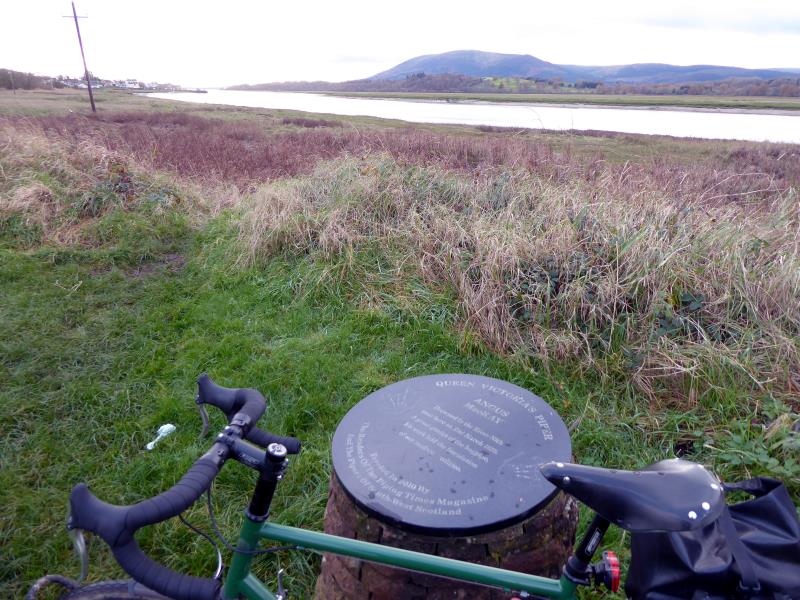 The Solway Firth is hard to tear yourself away from, though that’s because of the quicksand rather than any scenic splendour. Today’s afternoon spin south of Dumfries down by the River Nith was a bit samey, in fact. I spent most of it trying to shake off the one hill that dominated the view, and failing. It was a bit flat, in all senses.

Still, it was pleasant enough trundling on Dumfries and Galloway’s famously untrafficked roads. I headed south from the city centre along the good riverside cycle path and along the waters which, during the floods earlier this month, were more ambitious in their scope, and had taken over most of Dumfries. Which is why I’m cycling here now, in even shorter daylight, and not then, when I’d have been mostly paddling instead.

I was intrigued by a waterside memorial to a famous piper who sadly died there. I’m quite a fan of classical bagpipes in the same way as I am of whisky – it’s intense and affecting stuff, but best enjoyed in small quantities, and too much can give you a headache.

I fancied I could hear something as I cycled away. The plaintive cry of the curlew? The ghostly echo of a departed piper? The rhythmic creaking of my silted-up drivetrain?

The signposted cycle path back to Dumfries from Collin disappeared into a wood, and I had to clamber over a crash barrier and brave the busy A701 for half a mile before getting to my Premier Inn.

e2e.bike > Other > Route research > Dumfries 1: Flat calm along the Nith