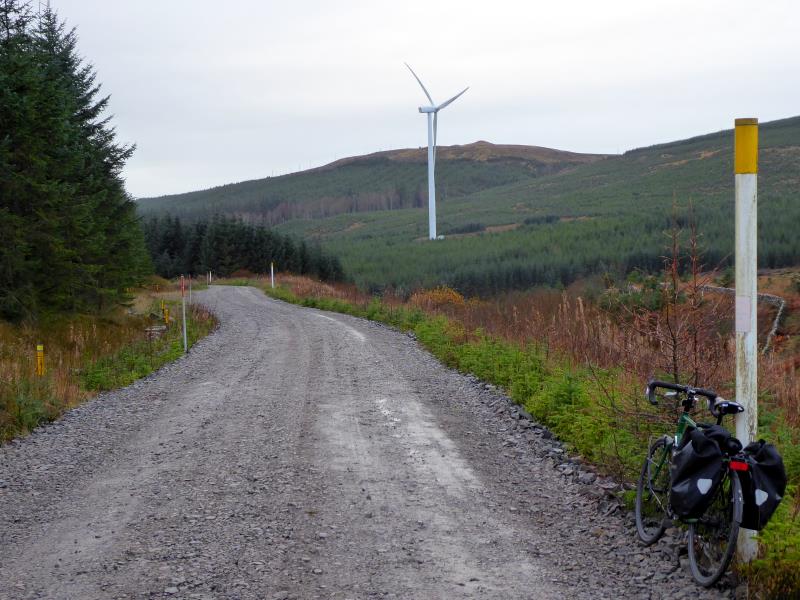 I’ve been to both Britain’s shortest place name (Ae) and longest (North Leverton with Habblesthorpe). What Ae lacks in consonants, it makes up with umpteen bike trails in the forest – and wind turbines.

I’m going to spell it ‘Æ’, making it a single-letter place name, like Y in France and Å in Norway. (Scotland has other compact place names: apparently Iona, off Mull, used to be called Í. You can’t get much narrower than a vertical line.)

Cycling to Æ from Dumfries is a pleasant affair, starting with a decent railtrail from the centre. I stocked up with supplies at the convenience store in Locharbriggs; I couldn’t find the fruit and vegetable section before realising there wasn’t one.

The friendly assistant asked what I was looking for. A Scottish trope, I said.

I followed a narrow, straight and effectively traffic-free back road north for eight miles. Like so many of Dumfries and Galloway’s back roads, cars are allowed to use it, it’s just that hardly any do, because hardly anyone lives here.

D and G is a landscape of farms: arable, dairy, and wind-. Cycling past bemused cattle, for whom I might possibly be the only passing traffic interest all day, I headed into Æ village and then Æ forest.

It has a network of tracks and trails for cycling, most for mountain bikers, but the main forest road – not open to cars – winds through the trees and hills and past dozens of wind turbines, enough to keep a 21st-century Don Quixote tilting for a lifetime.

This forms part of National Cycle Route 10, and it was a thrilling ride today. The surface is often a bit bumpy, but nothing to challenge my sturdy Spa Cycles Tourer. At one point I encountered a steamroller that was there to smooth the tracktop. Luckily it was going the other way. At my pace I’d have struggled to overtake it otherwise.

I took a timber haulage route south to rejoin tarmac, and followed more delightfully quiet lanes alongside streams – and one short stretch of horrible main road – down to Lochmaben.

I tried one short cut on a track shown on the OS map which must have been one of those deliberate mistakes they put in to catch out plagiarists, because it didn’t exist. As didn’t the watertightness in my ragged trainers, which were quickly inundated and soaked my feet as I struggled across boggy wastes.

Lochmaben was a pleasant little lunch stop with a handy bakery-cafe doing takeaway coffee. I stopped at the side of Castle Loch to have a Scotch pie and a chocolate bar, and then found there was a better waterside at Kirk Loch round the corner, so I had another Scotch pie and chocolate bar there.

More empty lanes winding through scenic, discreetly hilly farmland took me back to the morning’s railtrail and back to town. My working day wasn’t finished, because I had pubs to research.