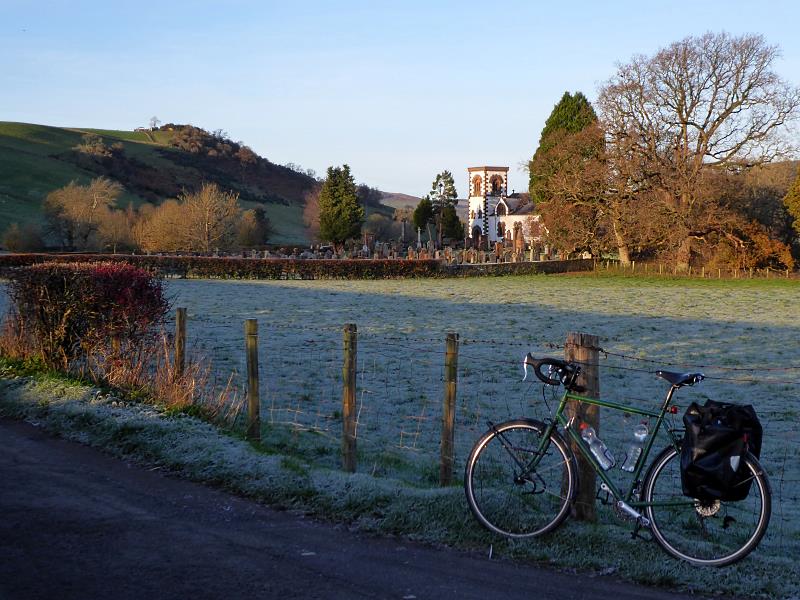 Dumfries and Galloway is said to have the most roads in Britain per head of population. There’s certainly a lot of empty tarmac. Often the network of single-track, untrafficked lanes winding through the gently hilly landscape can feel like cycle tracks.

This area is known for its Dark Skies, and is a great spot for astronomy. Many black holes have been spotted here, not in distant galaxies, but in the roads. You have to watch out constantly for potholes as you glide down the long, otherwise delightful, steady downhills.

Today was a crisp, cloudless winter day that started freezing cold. The bike-ped bridge over the Nith on the bike route northwest out of the city centre was frosty and slippery – two words that, now I think about it with a shudder, also described a certain creepy teacher at my secondary school.

Then it was a glorious few hours of having the roads and gentle hills and streams to myself. There was hardly a soul to be seen, which wasn’t reassuring when I got a puncture in the middle of nowhere.

I managed to fix it up no problem in the now thawed-out sunshine, and rewarded myself with a pack of cracked black pepper flavour crisps afterwards. Or maybe they were cheese and onion and I just hadn’t been able to wash my hands properly.

I had lunch by the loch at Castle Douglas and enjoyed a coffee in town, then followed the Old Military Road east back to Dumfries. (Hmm: ‘old’ and ‘military’ also described that teacher.)

Despite the name, it’s just a normal road, though quiet (of course) and with pleasant views of the modestly rolling countryside – the last few kilometres almost all downhill and with a tailwind, which made up for that puncture.

The final leg was the excellent few miles along the Maxwellton Railtrail into the north of the town, across the Nith on a restored viaduct. There’s a memorial to local blacksmith Kirkpatrick Macmillan who, according to Scottish folklore, invented the pedal-driven bicycle nearby in 1839. But not according to cycling historians, who reckon it’s cobblers.

He seems to have done both of these in abundance in the Globe Inn, which started in 1610 and is still going strong.

With heavy winds forecast for the next day and an afternoon train to catch, I decided to make it a Burns investigation day instead of a cycling one.