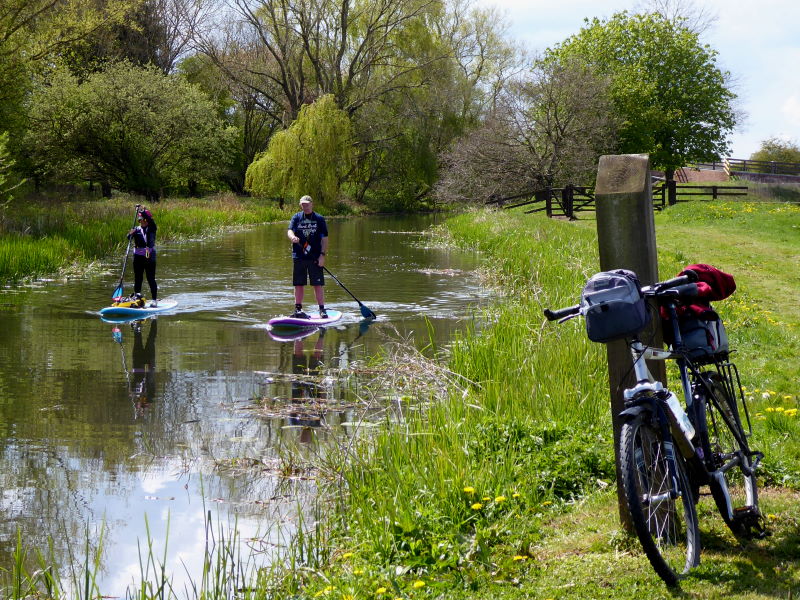 Not so Pocklington Canal, an isolated spur of water connecting the Derwent with the market town, a dozen miles east of York. It was one of Britain’s last canals to be built, opened in 1818 not long before the railway boom flushed them away.

It’s also one of the quietest. Few narrowboats ply the navigable stretch from the Derwent up to Bielby. Beyond that, between Bielby and the canal head at Pocklington, derelict locks awaiting restoration – as well as a few psycho swans defending their nests on the plush, weedy overgrowth – rule out all craft, even inflatable canoeists.

It’s quiet, obscure, and said to be one of the country’s best for wildlife. But there’s no information anywhere about cycling it (other than the general message on the Canal & River Trust website that considerate cyclists are welcome on all towpaths). So I couldn’t resist trying.

I joined the canal at Hagg Bridge (site of some recent bike-friendly roadworks) and took the towpath south to Storwood. The towpath was a bit lumpy but rideable on my hardtail trekker: I’ve slept on less comfortable hostel beds.

There’s no connection to the road at Storwood, and all I could do was turn back round and start heading north to Pocklington, but I’d come this way to glimpse Wheldrake Ings. It’s one of the best wetlands in the country, though last time I visited (during my Derwent Rivers Ride) it was so wet as to be one enormous lake.

I headed back north, passing some chirpy paddleboarders. They recommended the golf club for lunch – their destination today – though how wetsuits would fit in with the dress code there I don’t know. Golf clubs can be snooty places if the last time I played the game was anything to go by, though to be fair, that was 1975.

The towpath skirts the village of Melbourne and gets really bumpy. You’d be fine cycling this in dry weather on a fat-tyred, full-suspension, damped-seatpost mountain bike, but on my hardtail trekker it was laborious going. At least I had some cheese in my rack-bag to look forward to for lunch. Though it had been milk when I set off.

Melbourne (pop. 800) little resembles its Australian namesake (pop. 5 million, same as Yorkshire) and is unrelated to it. (Evidently Queen Vic named the new Aussie settlement, after a toff who took his name from the Derbyshire village of that name.)

Now that long-haul travel is a thing of the past, this may be as near as I ever get to Down Under, so I decided to embrace the antipodean atmosphere by having a pint of bad lager in the Melbourne Arms, sledging foreign cricketers on the pub telly, and abusing passing cyclists. Luckily the pub was shut for lunch, so I couldn’t.

I paused to admire the few narrowboats moored in the Melbourne Arm (the side-canal, not a pub with an incomplete sign) and carried on up the towpath, as knobbly and tedious as ever, the path not me obviously.

I didn’t manage to spot much wildlife. A few iridescent dragonflies. Some other flying things that unsuccessfully tried to bite me. A buzzard being chased off by some delinquent crows. The demon swans hissing me away from their eggy nest. And I shooed out several off-leash dogs who were showing a little too much interest in the possibility of territorial marking on my bike tyres while I was taking snaps.

The final stretch of towpath – the two or three miles south from Canal Head, on the edge of Pocklington itself – is a pleasant bike ride. In fact, if you’re looking to cycle it yourself, I’d recommend getting the 46 bus from York to Pock (it takes bikes for free, hooray). Cycle down Canal Lane to Canal Head, and take the towpath two miles down to Coates Bridge.

After that you’re best taking lanes roughly parallel to the canal to Melbourne, glimpsing the canal from the paths and lanes that cross it or lead to it, and retracing your steps back to Pock.

Pocklington Canal is pleasant and calm, though on a biscuit scale of excitement (going, say, crispbread – digestive – custard cream – choc chip cookies – Aldi chocolate Hobnob knockoffs – real chocolate Hobnobs) it’s down at the ‘digestive’ end of things with a cup of tea.

I wasn’t intent on a cup of tea on my arrival in Pock, though. I had a beer in mind, and celebrated my trip with a pint of Bradfield Blonde in the Black Bull’s beer garden, just off the pleasant market town’s central street, and its indie shops, cafes and bistros.

I took the bus home and reflected on my trip. Uneventful, and bumpy: the Canal towpath had put me in mind of James Bond’s martini cocktail in Dr No. I was shaken, not stirred.

But, as always on a bike in Yorkshire, it was a quietly delightful little day out. And a pint seemed more appropriate to finish the day off than any concoction of gin and vermouth.