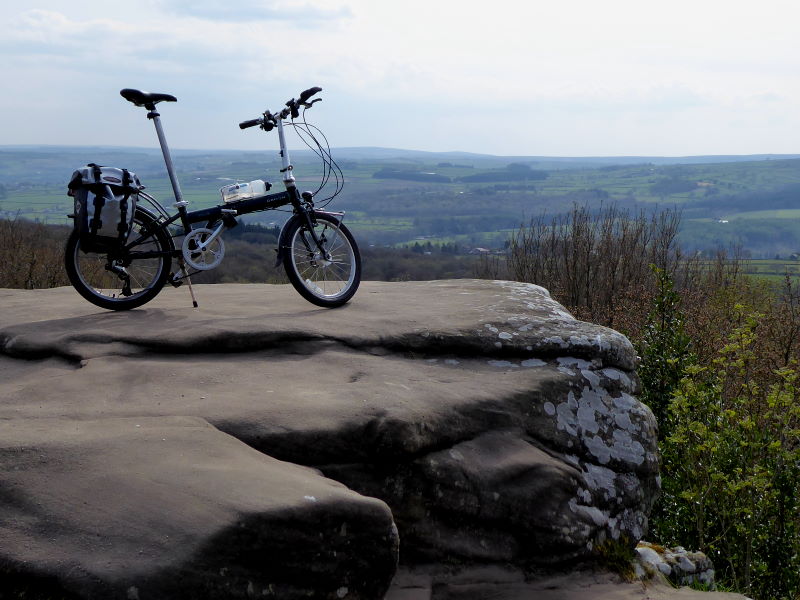 After being delighted by Coldstones Cut just west of Pateley Bridge earlier in the day, I still had a few hours before my bus back home, so I headed east to Brimham Rocks.

I passed through the village of Glasshouses. It put me in mind of the previous week when I’d cycled through Stone in Staffordshire, and someone threw a glasshouse at me. I thought, they shouldn’t be doing that.

I’ve not yet cycled through Stonehouse in Gloucestershire. If I do I’ll watch out.

Anyway, as to the Rocks, I’ve been here several times before, though only once on a bike: in 2010, as part of the Way of the Roses. This time, mindful of Harrogate Bus Company’s Conditions of Carriage, I was on my touring folder.

Brimham Rocks is an area of intricately weathered, fantastically-shaped room-sized standing boulders. It’s like wandering round a barren alien world with no intelligent life-forms. In other words, {insert name of your least favourite place outside Yorkshire}.

It’s free, of course, so I treated myself to an ice-cream from the van before I explored the rocks themselves. Cold and slippery, and something of a health hazard, the ice cream was a little disappointing.

The site is pretty big – nearly 200ha, and remember that Trafalgar Square is 1ha – and paved paths enable easy bike-pushing for those irritated by the lack of cycle racks in the car park. Just as well, when one hand is occupied with a bland but sizeable vanilla 99.

I spent a happy hour or so just ambling round, looking at the curiously shaped rocks, and then hurtled down the hill to Summerbridge to get my bus back to Harrogate station and thence train home.

I had an hour to kill, and worked it to death in the Harrogate Tap. My ice-cream had cost £4; my pint of Rooster Capability Brown cost £3.40. Draw your own conclusions as to the better value experience.

The beer was a gently sweet, gently malty classic bitter, with notes of bacon pancakes with maple syrup, hints of prune jam, a soupçon of fig compôte, suggestions of medlar jelly… my beer taste buds were clearly a bit delirious at the experience of drinking at a pub again: it was my first bar-bought pint for six months.