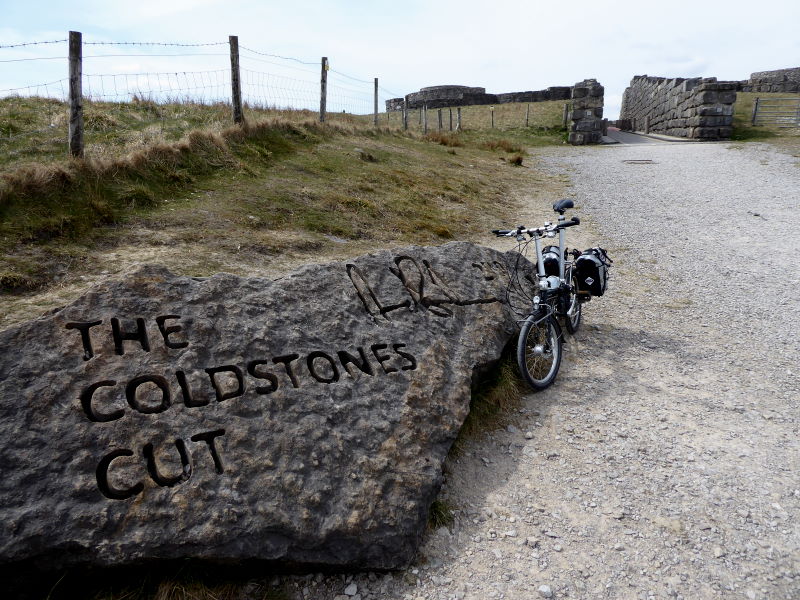 Coldstones Cut might look that way, but it’s none of these. It’s a hilltop artwork from 2010 that overlooks a dusty, noisy, working quarry – but it’s one of my favourite works of public art, if not the favourite, that you can enjoy by bike in the UK.

Fabulous views, fun to explore, a super if strenuous little cycle ride from picturesque Pateley Bridge… and all for free.

The Cut is artist Andrew Sabin’s response to Coldstones Quarry, a huge works that produces aggregate for the building industry, mightily situated 1375 ft (419m) up on top of Greenhow Hill, a few miles west of Pateley Bridge. It’s invisible from the road, except for the atomic-mushroom clouds of dust kicked up by the trucks and diggers.

I’d cycled slowly up Greenhow Hill, and rapidly down it, several times before now. But I’d never even noticed the Cut, the biggest, highest and most spectacular public art work in the country. So today I put that right, and my dust mask on.

Pateley Bridge is a train-then-bus from my home in York, so I took my folding tourer today, my Dahon Speed TR. You can tell real cycle tourers from normal people because if you show them a picture of it in front of say Iguazu Falls or Everest Base Camp, they’ll say, what’s that bike? What’s the gearing, SRAM rear hub with derailleur? Is that a front-hub dynamo? Will it take camping equipment on those front and back racks? Are they 20-inch Big Apple tyres? (Yes to all, btw.)

The bus journey itself, from Harrogate to Pateley Bridge, was very scenic, but astoundingly clattery. It was like sharing a vehicle with a taiko drumming troupe rehearsing for the Edinburgh Tattoo.

I laboured up the hill to the Cut by the side way out of Pateley Bridge – Peat Lane, not the main road. I stopped frequently to admire the retaining wall, road-bend trickery, and lavishly skiddy gravel that would make descending this with hair-trigger brakes a risky business. And to catch my breath, of course: it’s brutally steep.

The views opened up and I began to glimpse the Cut itself, looking like a fortress gateway.

There’s a car park for those unlucky enough to drive here, from where – conveniently for those pushing bikes – a shale track puffs its way up to the entrance.

The rugged, blocky walls greet you like the barbican of a work-in-progress Inca citadel. It’s like coming upon Yorkshire’s Machu Picchu, a 24 bus ride from Harrogate. Bizarrely, there are single yellow lines painted on the ‘road’ which starts and goes nowhere, will never see a car, and has an isolated mini-roundabout afloat in the middle. So it’s just great to cycle along.

I imagined the bustling market this main street must have had in the days it was the service town for the Roman mine. Quite a feat of imagination, seeing as it never was anything of the sort. But that’s what good art does: it sparks up thoughts you’ve never had before, could never have had before. Ideas which probably won’t earn you any money. But which are fun all the same.

Coldstones Cut could be anything. It’s wonderful for those of a fantastic turn of mind. An Aztec bastion where human sacrifices were toasted with brown ale. A Shogun-era Japanese donjon where samurai ate black pudding sushi. A Moorish alcazar where Muslim and Christian harmoniously discussed science and philosophy over lemon curd. A Napoleonic redoubt where besieged pro-Bonaparte separatists held out for months on Yorkshire pudding.

On either side of the Cut’s central avenue are two mirror-image spiral walkways. A gentle, involuted stroll up gets you to a pair of viewpoints. Indicator panels point off to distant, exotic locations, many of them correctly spelt. You feel at the centre of the world.

And Machu Picchu, distanced to within a hundred metres at 9957.9km. Or perhaps we’re already there, in a sense?

And the views! There are few better places in the country to have a picnic lunch (and a picnic lunch is your only option: there’s no cafe, no snack van, nothing, and I like it that way). Because you don’t merely enjoy sweeping panoramas over the moors. There’s a bike sculpture the size of a tank, just the machine for revenge fantasies of crushing the white van that close-passed you.

There’s also the strange sight of white spheres, strewn across Nidderdale as if waiting to be collected from a celestial driving range. They house uber-top-secret radar monitoring equipment at RAF Menwith (whose illegal data-snooping on innocent UK citizens for the US is lamented in this month’s Idler magazine). So if Russia does launch its retaliatory nuclear strike first, America will have just have enough time to order their bunker rations from Amazon.

Plus there’s the quarry itself, roaring and clanking and chuntering away down there on the vast blue-grey terraces, like some miscoloured postcard view of the Andes.

Enough excitement for the over-active imagination. I hurtled back down Greenhow Hill past the warning sign (15% 2 miles Long steep hill Cyclists ride carefully) into Pateley Bridge and my bus back home.

But I wasn’t yet quite finished for the day. Because there was even more rocky stimulation to come just up the road…

Coldstones Cut is fab though. Go. But go by bike.

Listen to my piece for classical guitar, written in 2021. It was inspired by the memories of this day’s ride: blocky piles of fifths evoking the stones themselves, an urgent middle section depicting the quarry, and a Celtic-feeling theme. (MP3, 5min).

You can see the score accompanying the same recording as above on my YouTube page.