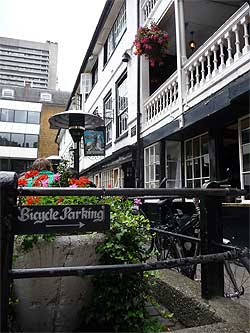 Where is it? One of the quirkiest, and best, pubs to cycle to in London is the George Inn in Southwark, just south of London Bridge.

What’s quirky about it? The George is just about the city’s only surviving coaching inn, and only one with surviving galleries: the capital’s pubs were virtually all refurbished from scratch in the pub-industry boom of the late 1800s.

I’m currently trying to construct a bike-based pub crawl in South London based on pubs that Charles Dickens didn’t drink at, but it’s proving impossible.(Yes, the tedious old hack Chazza apparently swilled in the middle bar. Shakespeare, who was a keen cyclist, is said rather fancifully to have been another regular.)

Why bike there? Out in the old coachyard in the bench-table buzz, they positively invite you to park your bike on the railings. So you can enjoy not only a fine pint of English ale, but also the knowledge that your small-footprint cycle journey has offset three minutes’ operation of the patio heater that keeps warm the smokers who can’t be bothered to put on a fleece on a chilly evening.

The pilgrims in Chaucer’s Canterbury Tales set off from Southwark’s Tabard Inn. That’s long gone, and the George is the nearest you can get. Now all you have to do is cycle to Canterbury, though the route they took is now the A2.