At last, a day without rain, and with a euphoric tailwind. 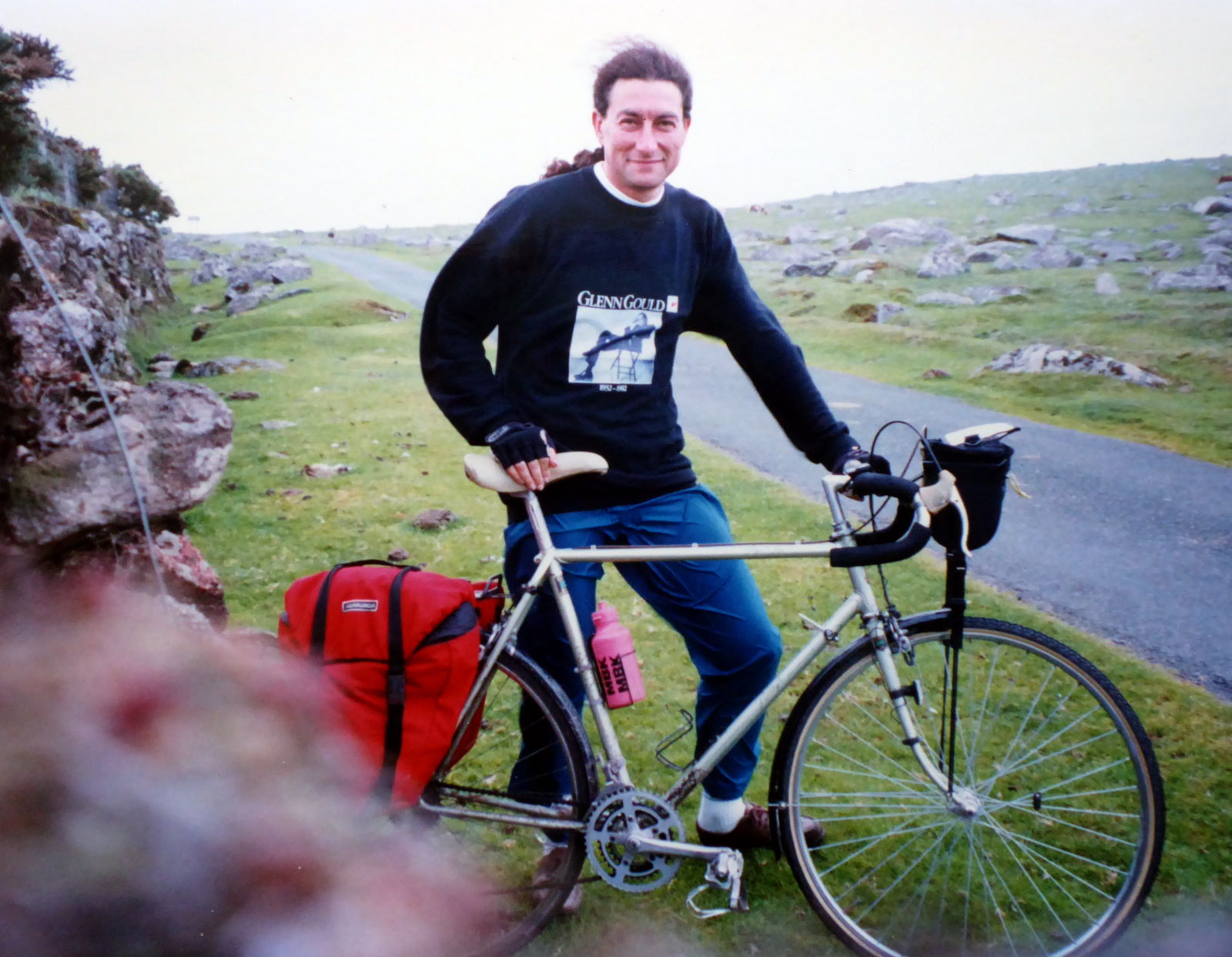 The local element to the B&B breakfast was home-made redcurrant jelly, and jam – a delicious rhubarb, ginger and pineapple, though I wasn’t sure all those ingredients had necessarily come from the garden.

Camelford had been in the news for a chemical spill in the water that had turned people’s hair green. Well, it had clearly started to turn mine (pic) from chestnut to grey. There can be no other explanation.
I wasted five miles into a headwind on the Camelford Cycling Museum, which turned out to be shut on Saturdays. Back in the right easterly direction, though, I whizzed along little up-and-down roads with the breeze behind me. 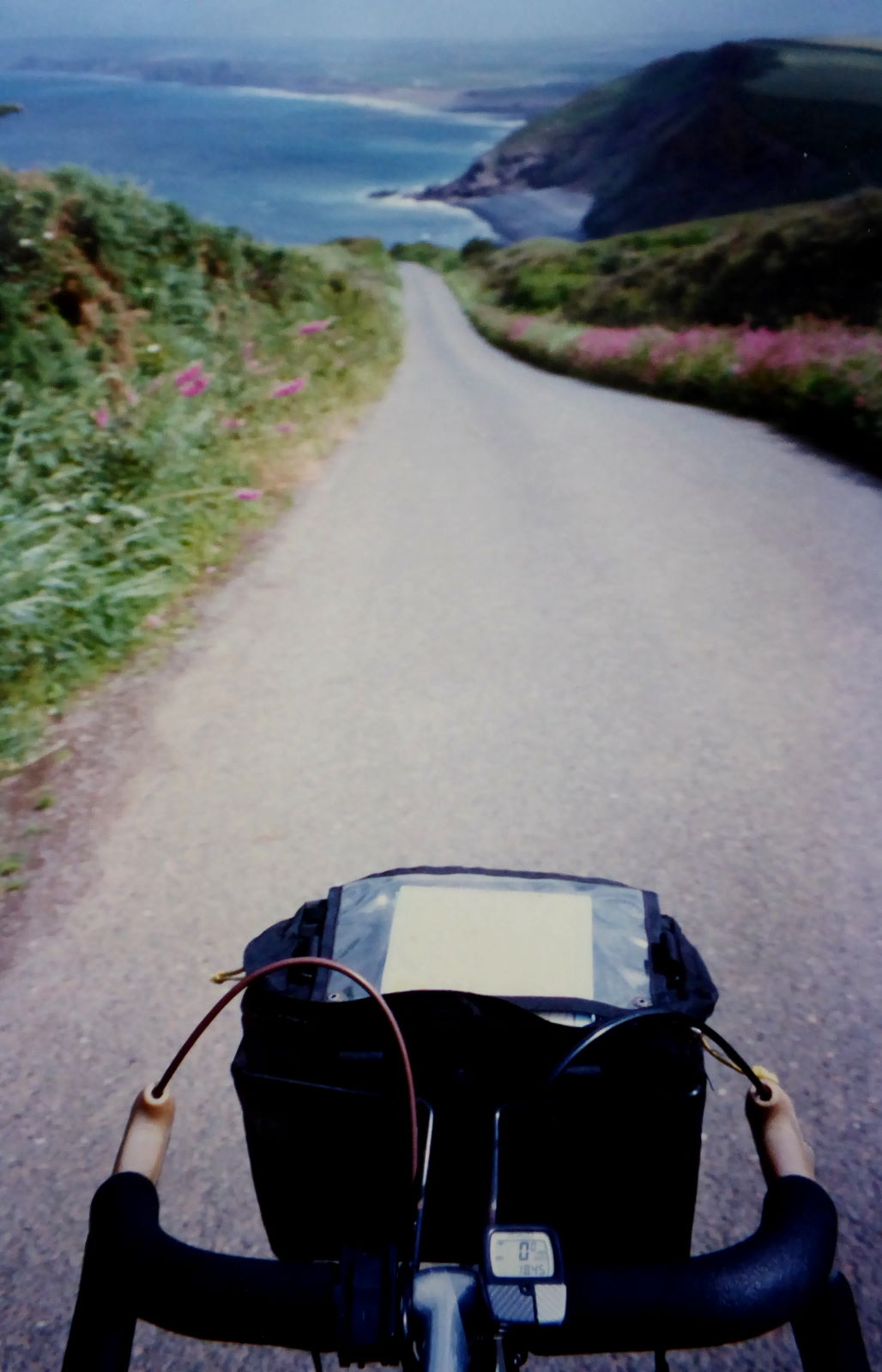 The coast appeared over a moortop (pic) like a sunrise, and I blasted down into Bude at 40mph. To my delight, I found a launderette and gave my sodden kit half an hour in a tumble dryer.

Now enjoying for the first time on the trip both sunshine and dry clothes, I had Bude Canal to myself for a couple of miles. 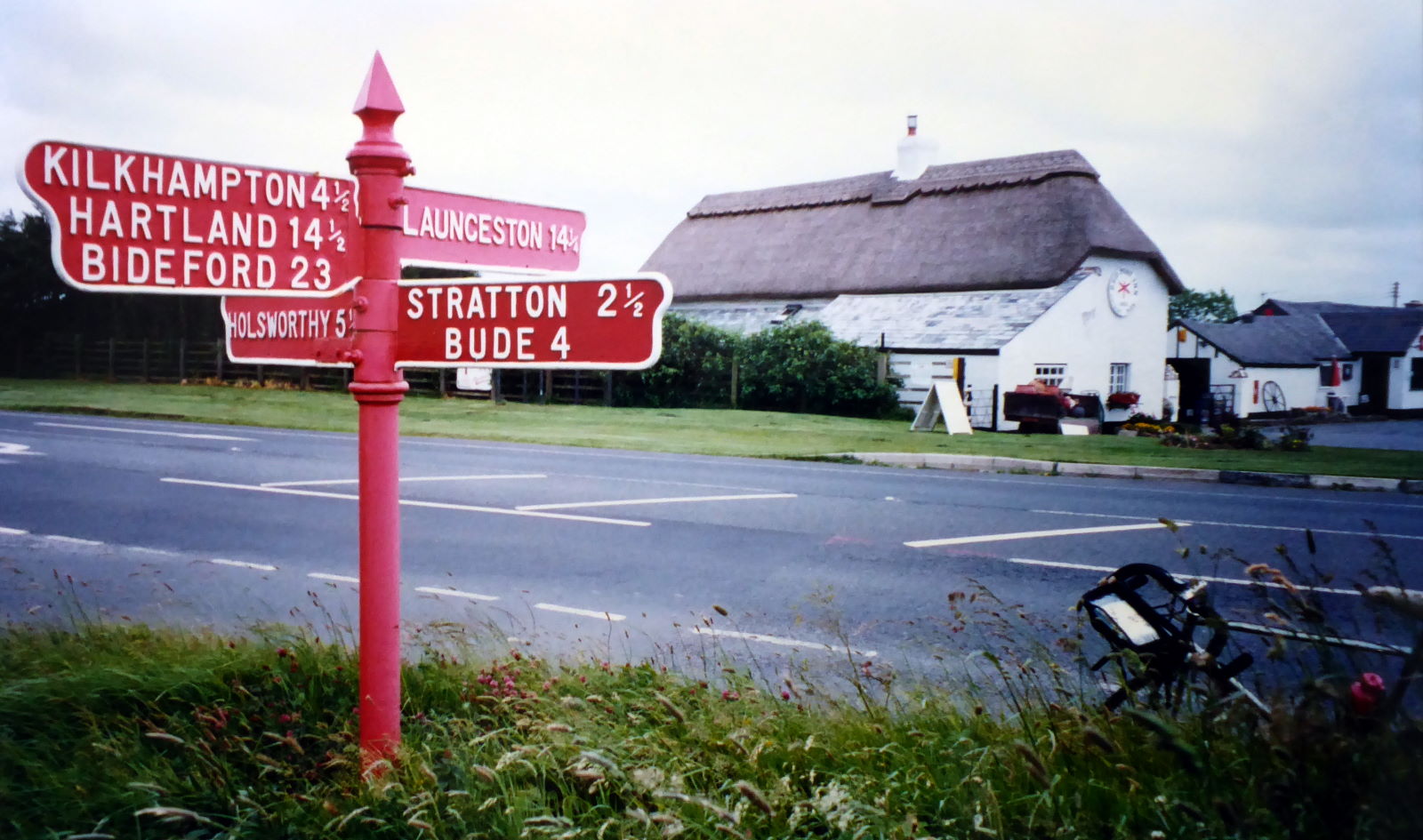 At last the signs were good. If not the road signs, which misled me until I came upon The Red Post (pic) with that south-west rarity, correct distances. And directions.

I made quick progress along an A road to Holsworthy. In the centre, I had a slap-up picnic lunch of good local stuff thanks to the regionally-aware sourcing of an unprepossessing village store in Widemouth Bay that looked like a disused post office.

Devon ham (richer-tasting than St Ives ham; perhaps the pigs eat clotted cream?); juicy, sweet local tomatoes; crab from the bay, dressed and in its shell, sweet and tasty; local strawberries; the remains of yesterday’s Yarg cheese; and some Cornish lager, 1793 from Redruth, and it didn’t taste bad considering it was so long past its sell-by.

I was feeling really good, at last, about this trip. I was happy. 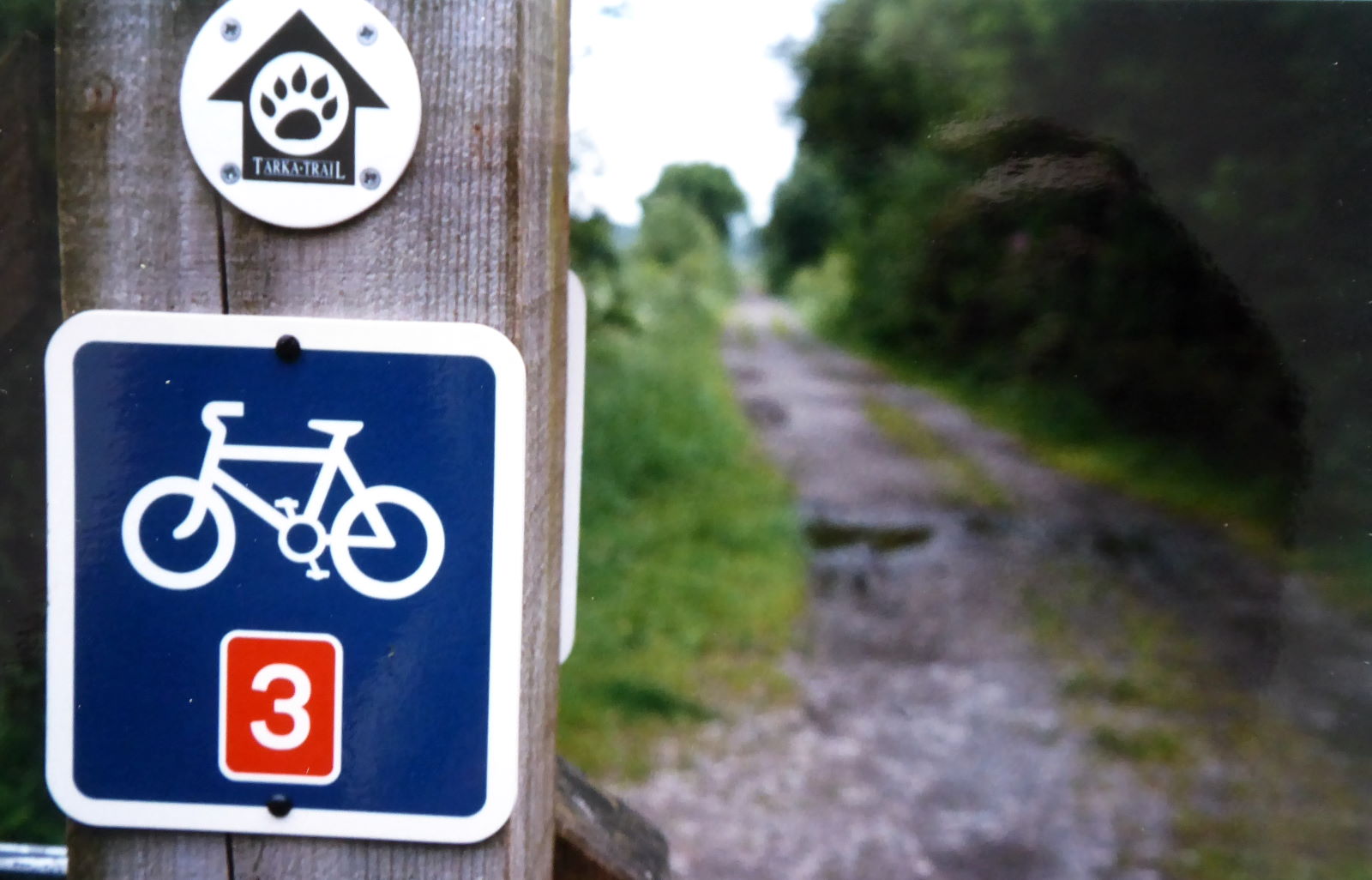 The afternoon was tough, with steep ups and downs through Black Torrington, but I eventually got to the Tarka Trail (pic), an old railway line that wasn’t too muddy considering the last two days’ rain. Why is it called the Tarka Trail? Because if you cycle fast enough you will be a little otter.

Anyway, I hurtled along at 15–20mph, listening to the test match on the radio in my bar bag, feeling good, especially as England were still on top of the Aussies. 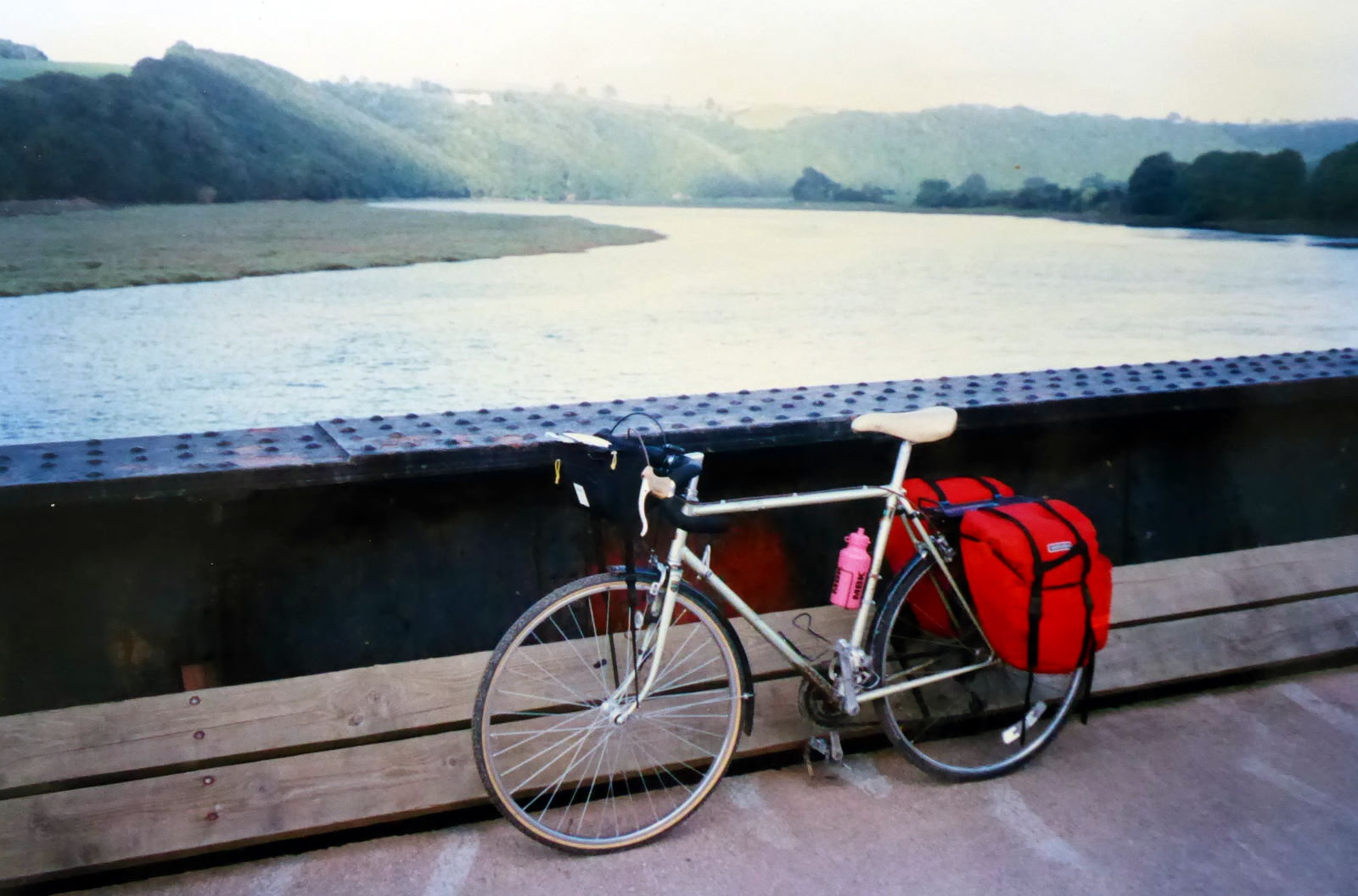 Church bells welcomed me to Weare Gifford, and I admired the panoramas on the bridges (pic) over the Taw and Torridge. More fast, level, sunny running got me through Bideford, Instow and finally Barnstaple.

Today had been very good: even my puncture had revealed itself at a good time, just as I was wheeling my bike up the drive of the B&B.

I couldn’t find a local-food option for dinner in town. The nearest I could get was home-made chilli sauce in a kebab shop.

However, local beer was no problem. At Rolle Quay on Yeo Wharf I was in a mood to do some diligent research.

Next was Exmoor Stag, from Winchcome, or perhaps Wiveliscombe, but definitely not Welcombe. Because it wasn’t very nice at all – perhaps literally bottom-of-the-barrel. Stag rating: Shoot it immediately.

I would have complained but I was watching the cricket highlights on the pub telly, which was clearly more important.

The beer was acerbic, sugary and immature. It also had a strange fragrance. Which all brought back unpleasant memories of a short-term girlfriend back in 1979.