Day 3 of the River Derwent ride featured a lot of flooding, and… well, that was it, really. Flooding. But also a fascinating end, with an unexpected tour of a tidal barrage opposite a mighty power station. 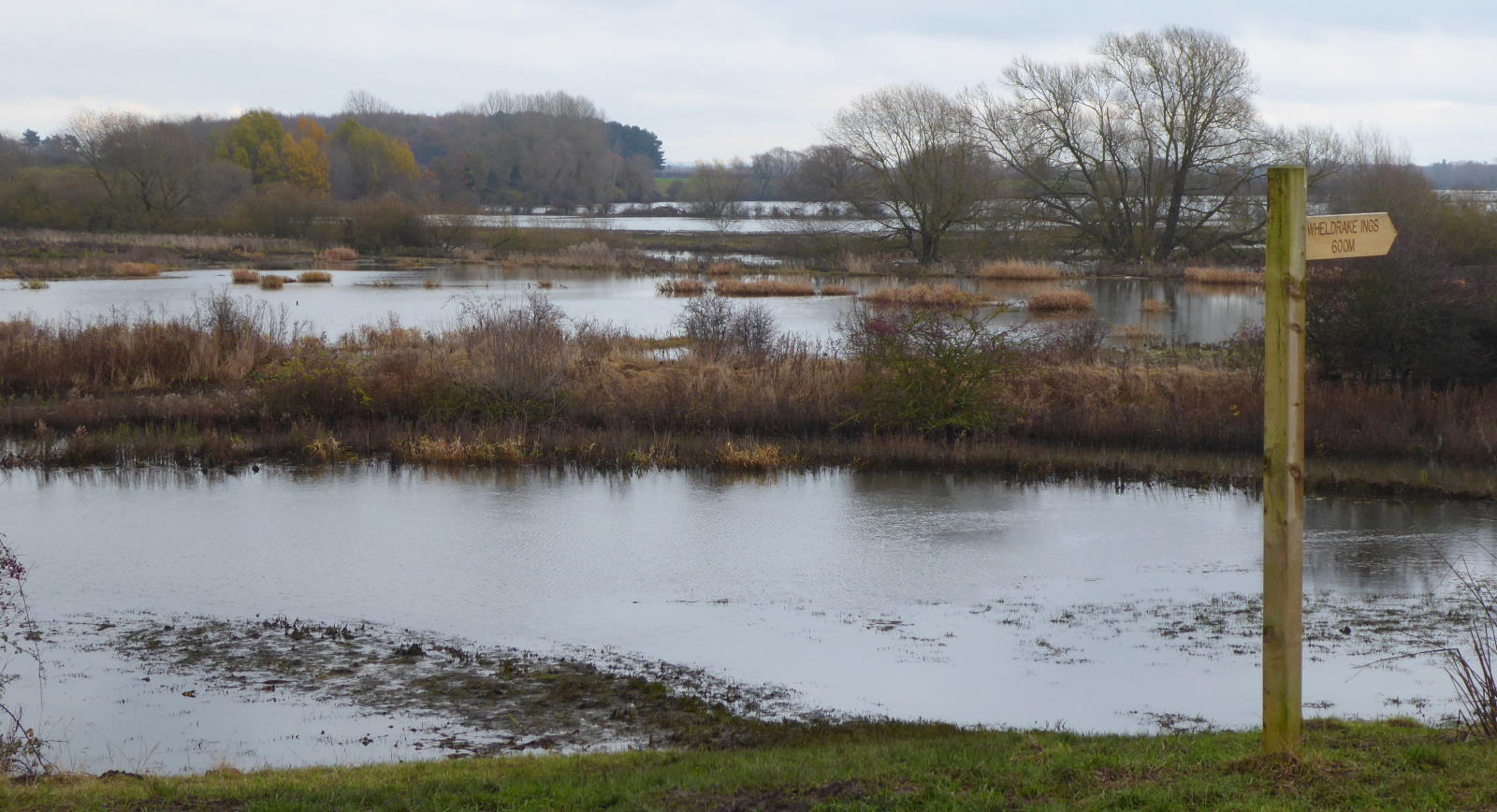 Now having switched to my touring bike, anticipating a day of tarmac on-road cycling, I resumed. The first major port of call was Wheldrake Ings Nature Reserve, and thanks to all the recent heavy rain, ‘port’ was a not inappropriate word: rather than marshy expanse, it was a lake district (pic). 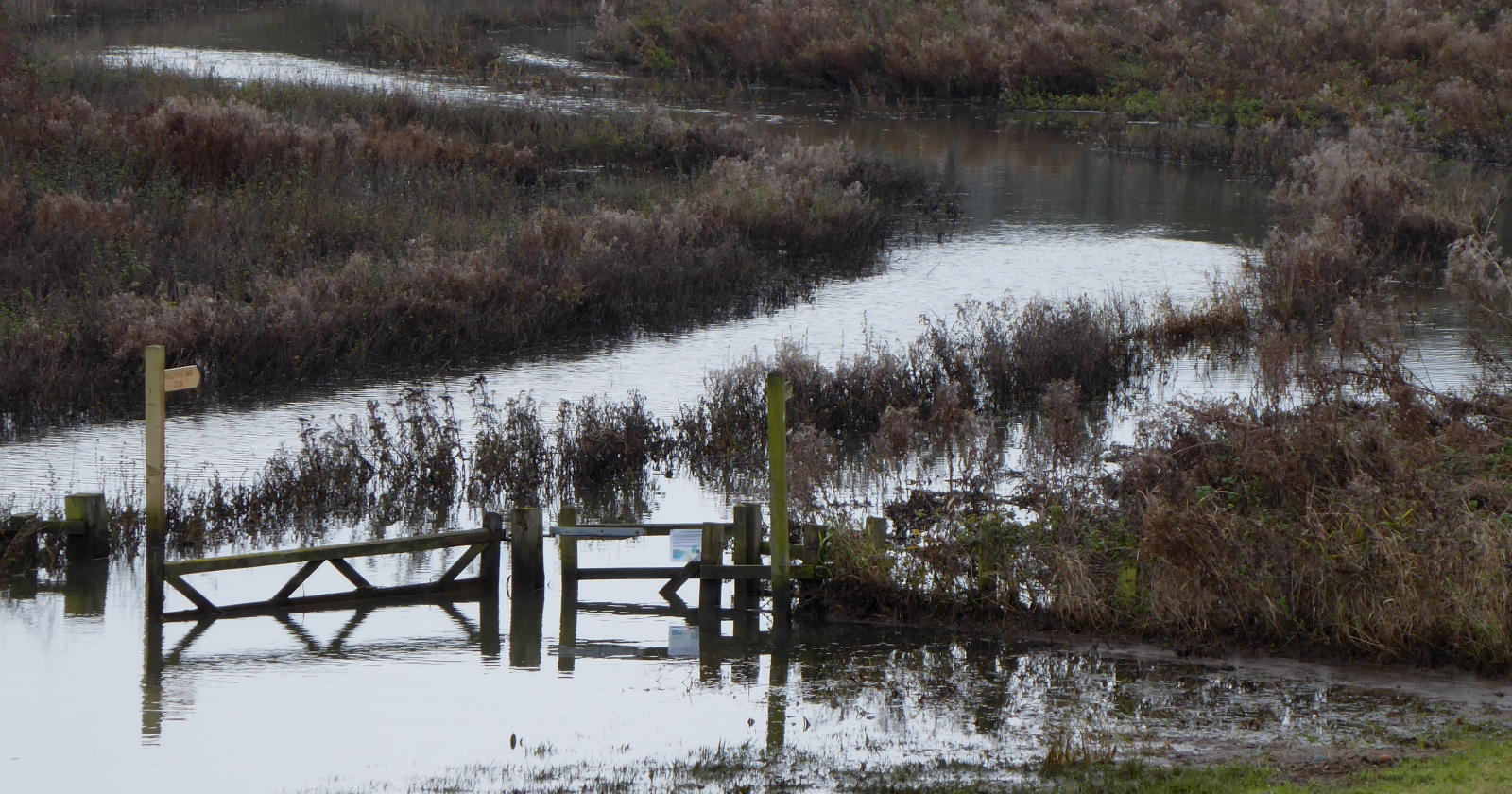 I clearly wouldn’t be walking round the reserve today to spot egrets, shelduck, widgeon, curlew, lapwing, warblers, corncrakes or any of the other birds recorded on the ‘recent sightings’ noticeboard. The reserve’s website recommends wellies; scuba gear would have been more use on this occasion. 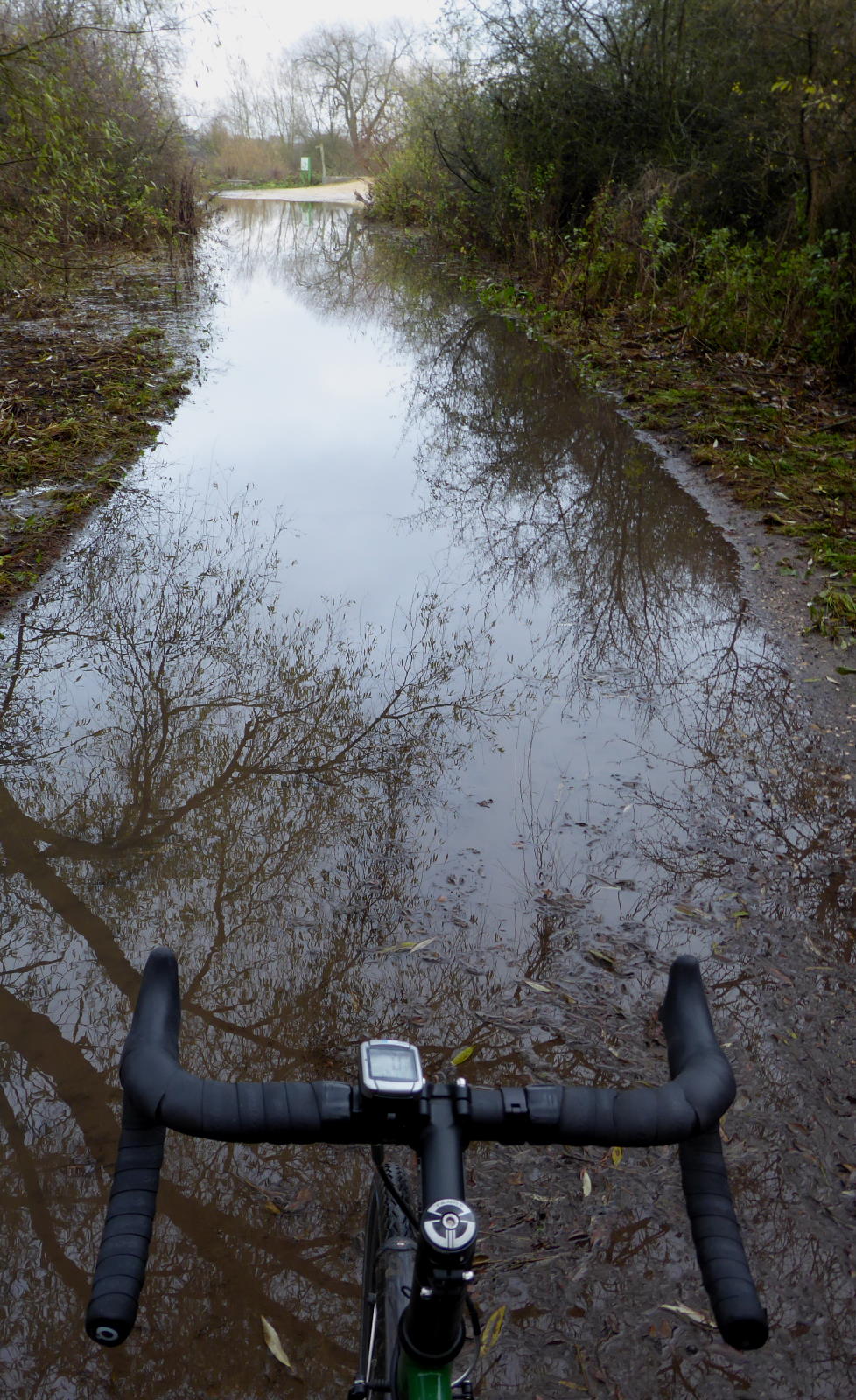 I wouldn’t be cycling across the reserve’s little Derwent bridge, either (pic). In any case, today the Derwent was about mile wide. Not quite the straightforward ‘road riding’ I’d expected.

So I turned round and biked on south, through the grey cool overcast morning, to have a picnic lunch by the pond in Duffield. Well, half a cheese sandwich and two chocolate Hobnobs, anyway.

I crossed the Derwent at Bubwith’s narrow bridge (pic), whose views showed the extent of the flooding: pretty much as far as you could see in any direction was water. 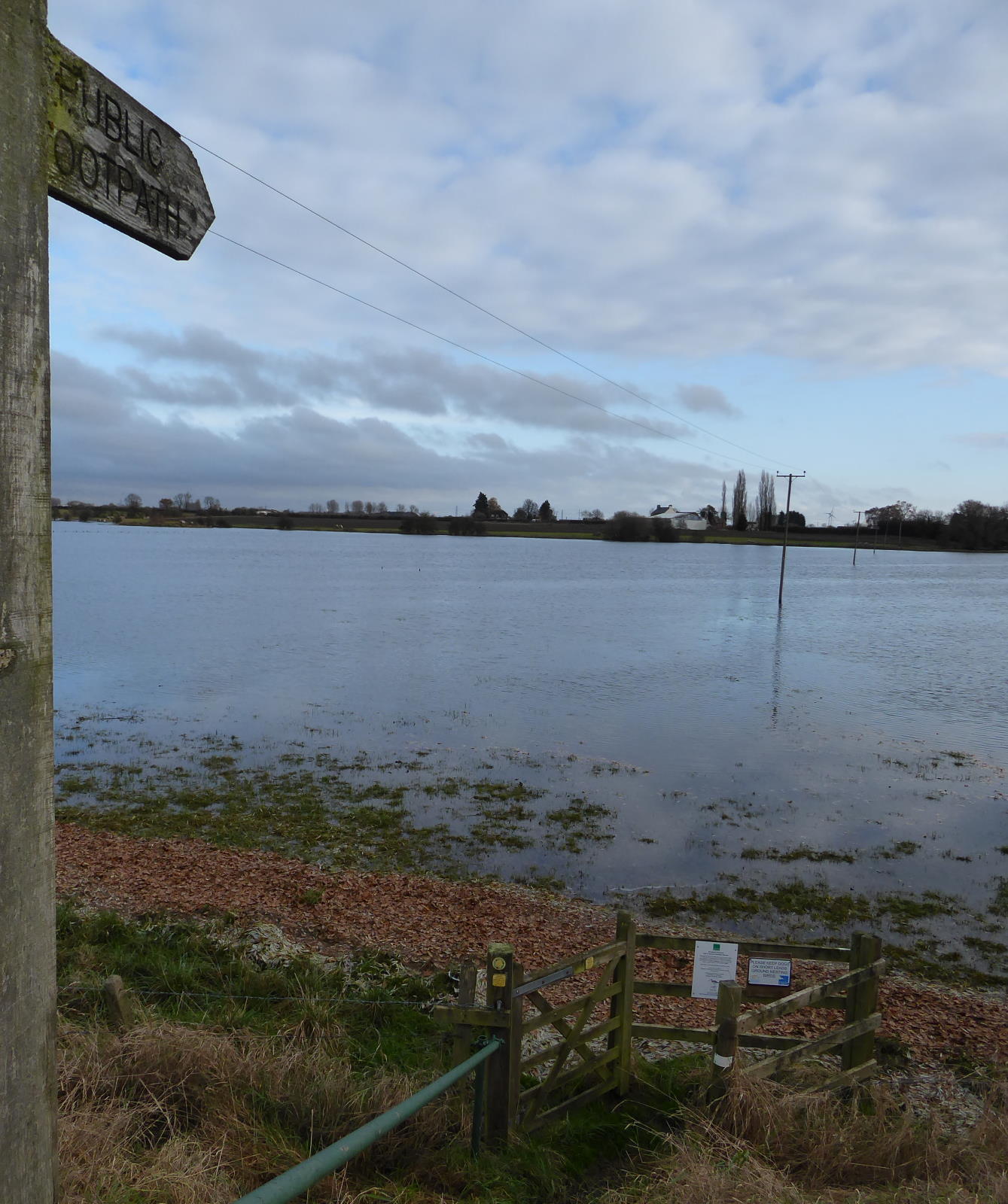 At Breighton I diverted to the riverside pub. I was too early – it was closed, which again was just as well.

I admired another footpath that I wouldn’t be taking today, seeing as how it was a metre under water (pic). 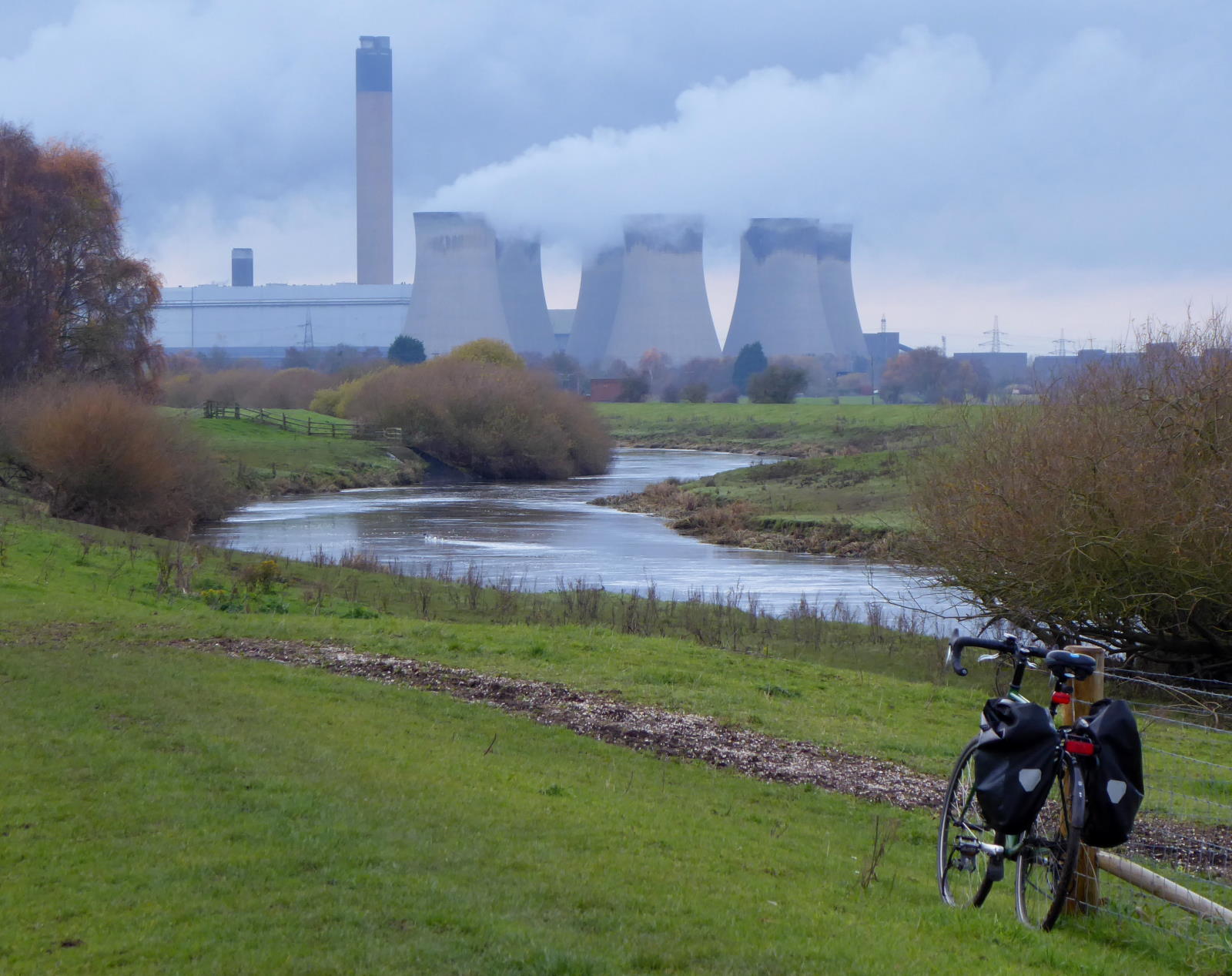 The final leg of the trip was on the footpath (yes, I pushed) alongside the Derwent as it flows determinedly south towards the Ouse, with the cooling towers of Drax power station as a handy landmark (pic). 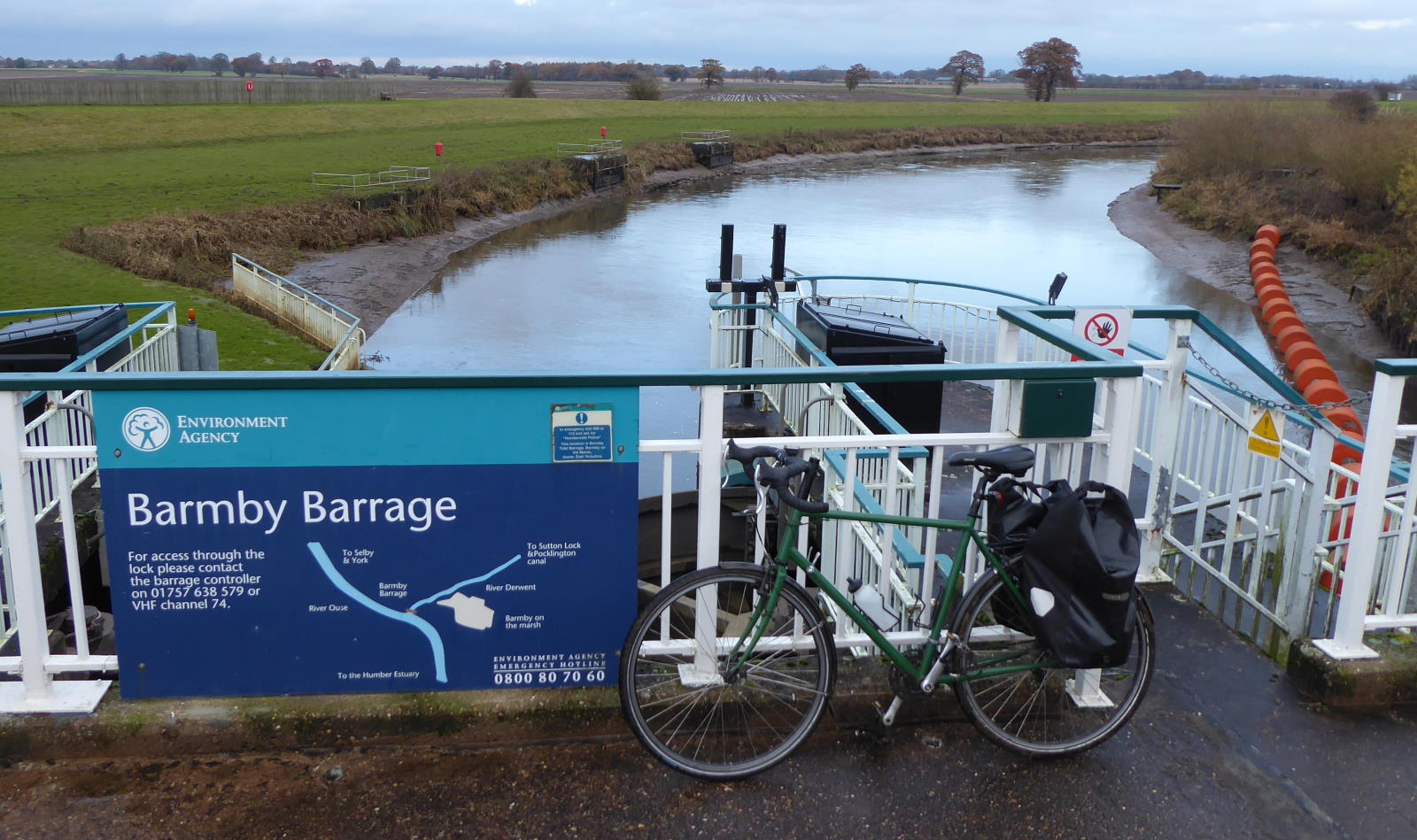 However, the Derwent would naturally be tidal, so to stop the brackish waters of the Ouse from invading, the mouth of the Derwent has a barrage to keep them back (pic). Twice a day, mighty steel shutters are lowered to block off the Ouse’s salty muck.

As I was poking around taking pictures, the warden came out to say hello and give me a guided tour of the plant. (He lives onsite and isn’t allowed to stray more than half an hour away, so it could well bring a bit of interest to his duties when a visitor arrives and asks intelligent questions. Or questions, anyway.)

We shared a pleasant chat about outdoor activities, cycle touring, and silt, and I got a tour of the engine room and a demo of the barrage’s computer controls. (There’s manual override for everything, which is reassuring in case of Windows 10 deciding to install major updates just when you were hoping to shut off a flash flood.) 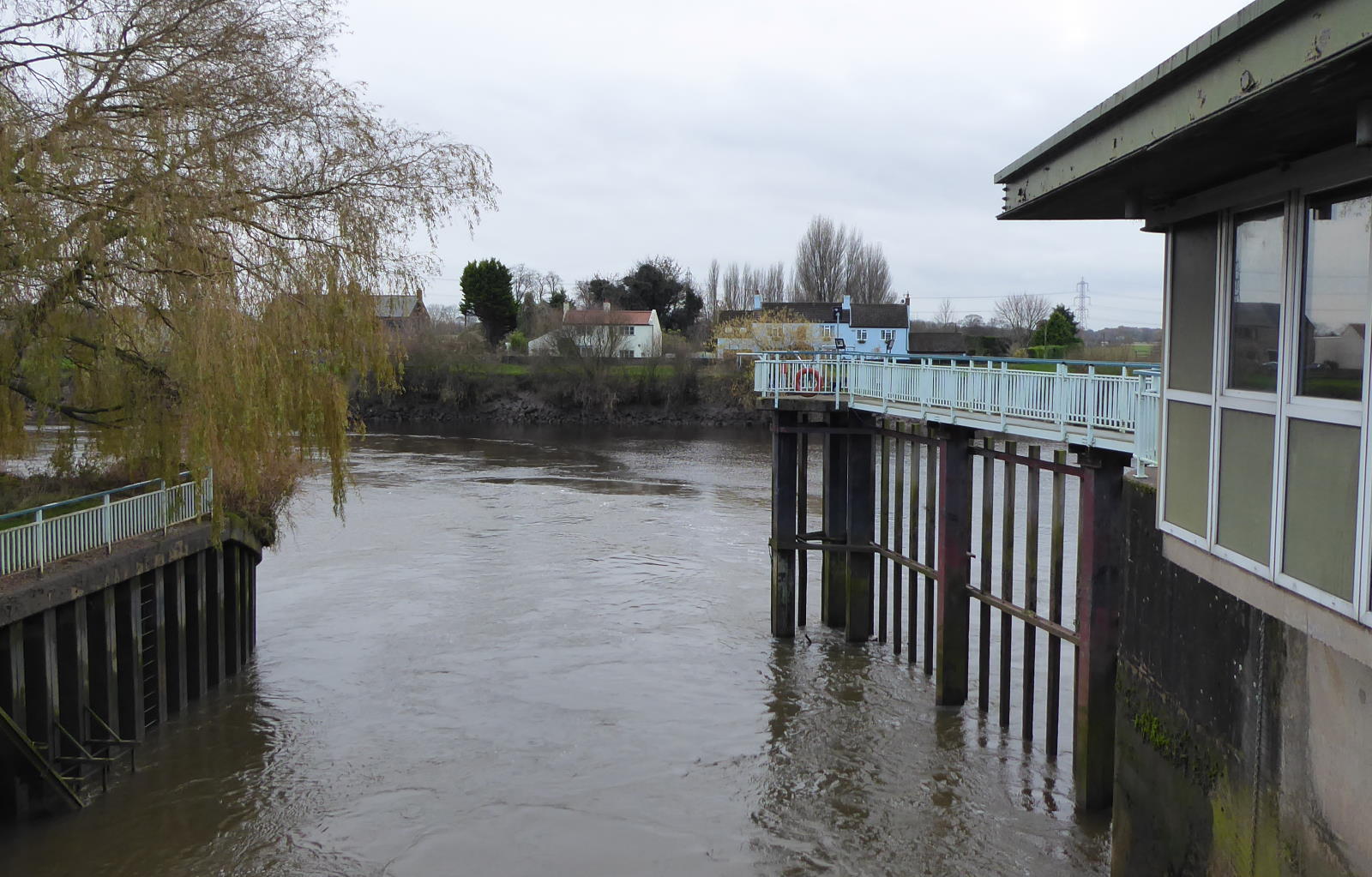 So, this was journey’s end: the mouth of the Derwent, opposite Drax power station, on the silty Ouse not far from Selby. A very controlled finish, thanks to the barrage.

And water, water everywhere: I’ll drink to that. With a bit of the Derwent itself.