The biggest climbs of the trip today (1500m in total), along ‘one of the world’s most dangerous roads’, more equipment disasters, plus a statue made of jade, some scary tunnels, and many awesome coastal views. 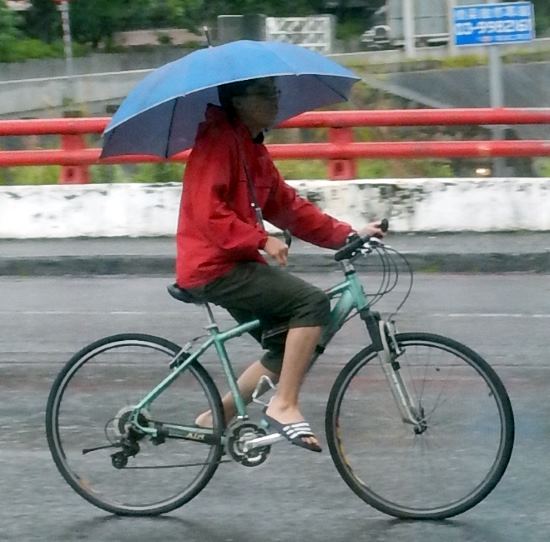 We squelched out of Luodong through heavy rain, weaving between local cyclists who have perfected the art of one-handed riding, the other hand being used to hold an umbrella (pic).

Tim took this photo. I missed it because I was too busy with custard bread and coffee for breakfast in a 7 Eleven. 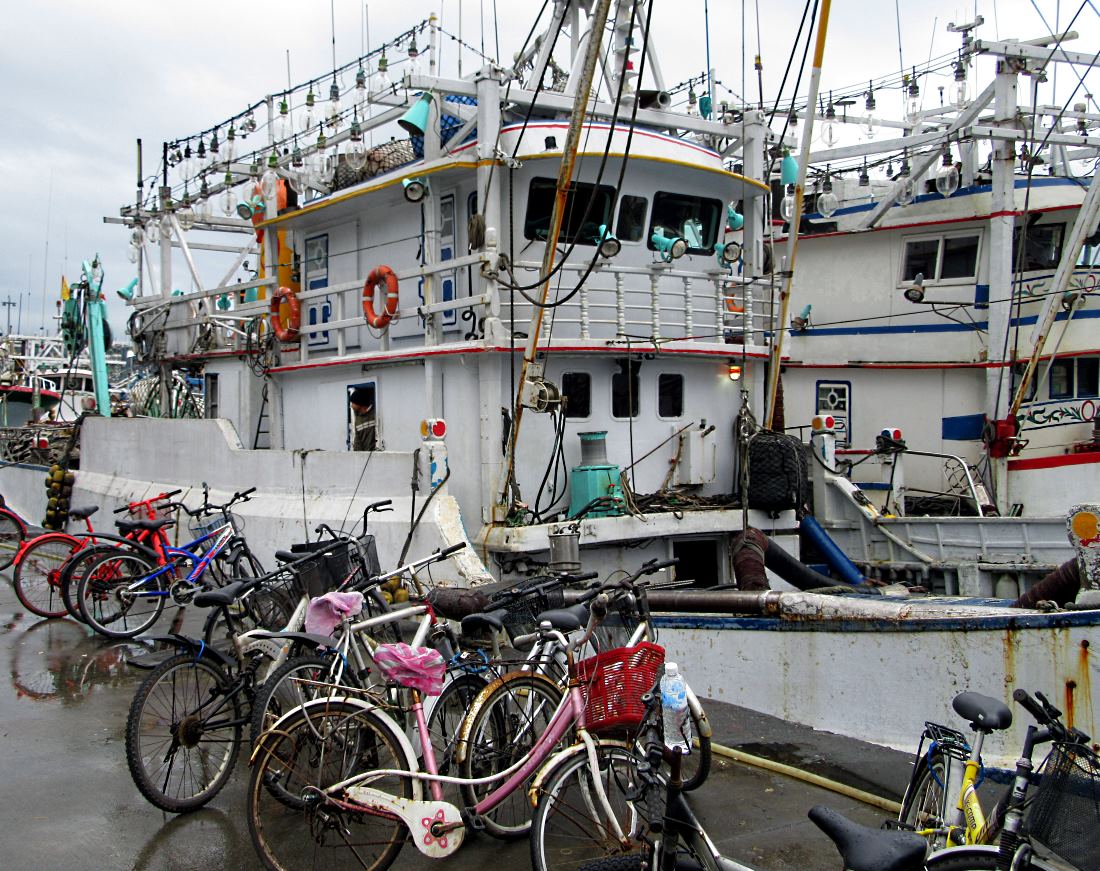 Our first target was the port town of Nanfang’ao, where the sailors on this squid boat evidently all cycle to work (pic). I think someone should lobby for cycle parking here. 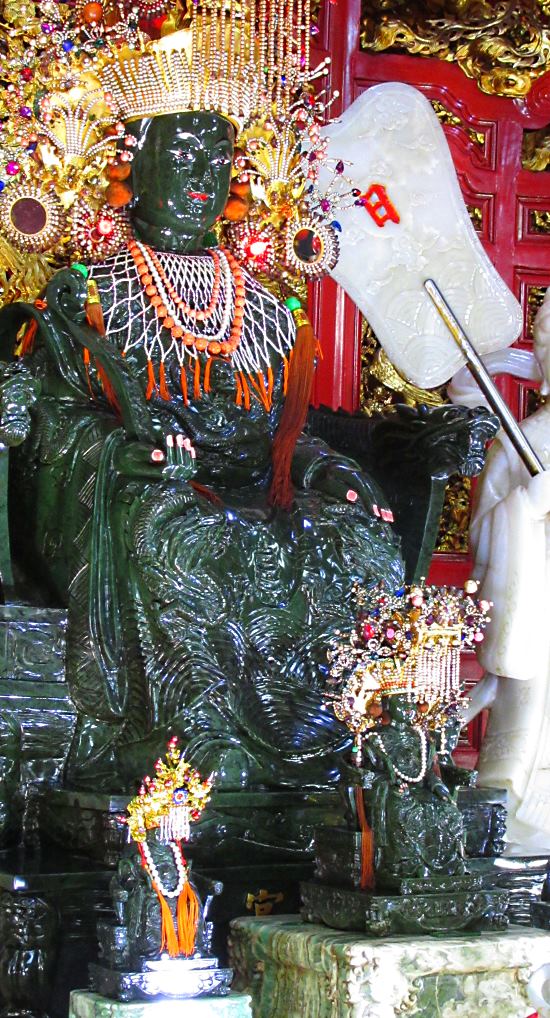 We’d come on the recommendation of the charming Maggie, owner of our hostel last night, to see this statue in Nantian temple made entirely of jade (pic).

It’s the god of the sea, Mazu, who locals pray to for a big catch and safe return.

I don’t know who the god of cycle touring is, so I prayed to Mazu instead for a trouble-free ride.

Fat lot of good he did, as we soon found out…

…but before that we were amused by this set of crystal balls showing moving computer-controlled displays (pic). One evidently wasn’t telling the fortune correctly. Actually, maybe it was telling my fortune all too accurately. 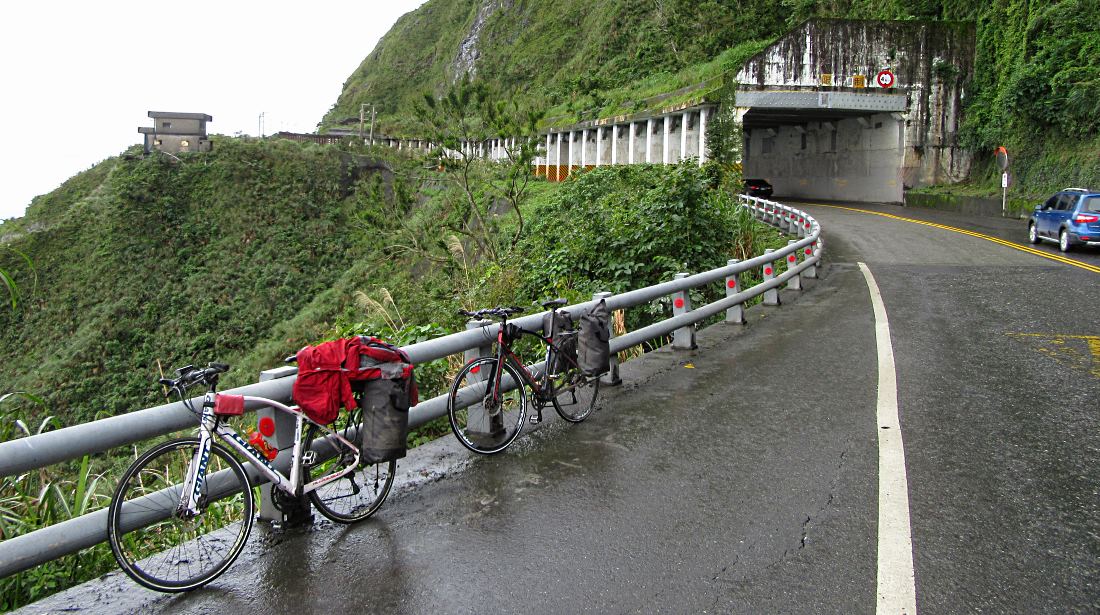 Anyway, to the day’s main event. We cycled the Suhua Highway, a road hacked out of the cliffs along Taiwan’s precipitous cliffs of the northeast coast. Rockfalls are a danger here, and there are several covered sections like this (pic). They’re only a danger in rainy weather though. Like today. Oh. 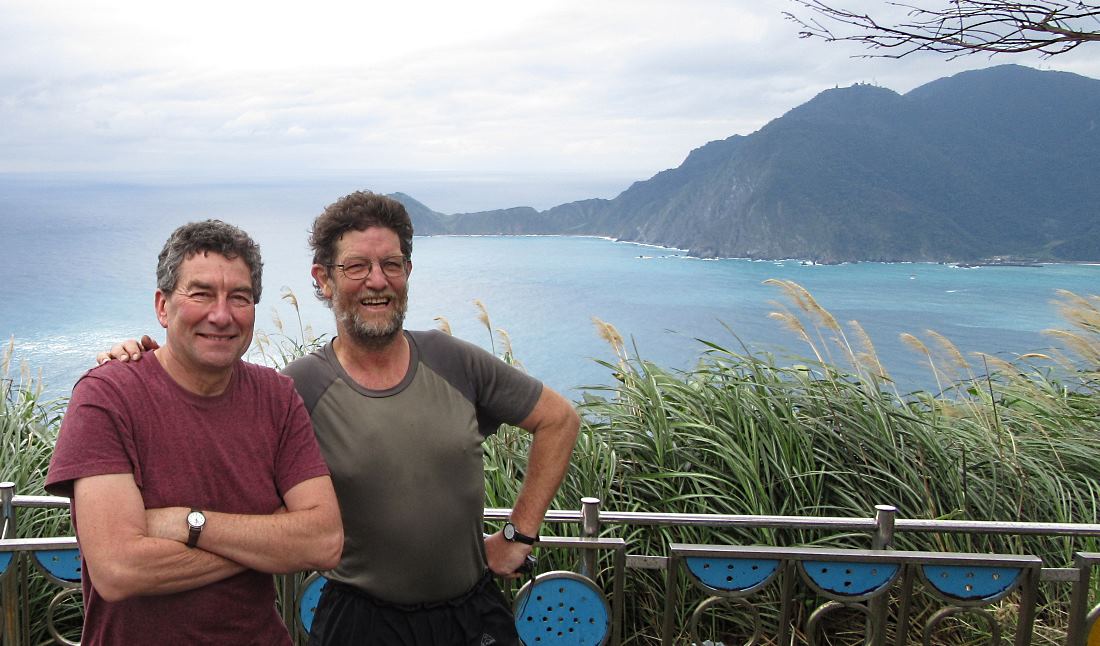 We’ve had a request flooding in from one of our readers for more pictures of us, so here’s one. We haven’t seen any other non-Taiwanese at all for the last couple of days; this is off the beaten foreigner track. Locals probably think all westerners look like this. Beaten foreigners. 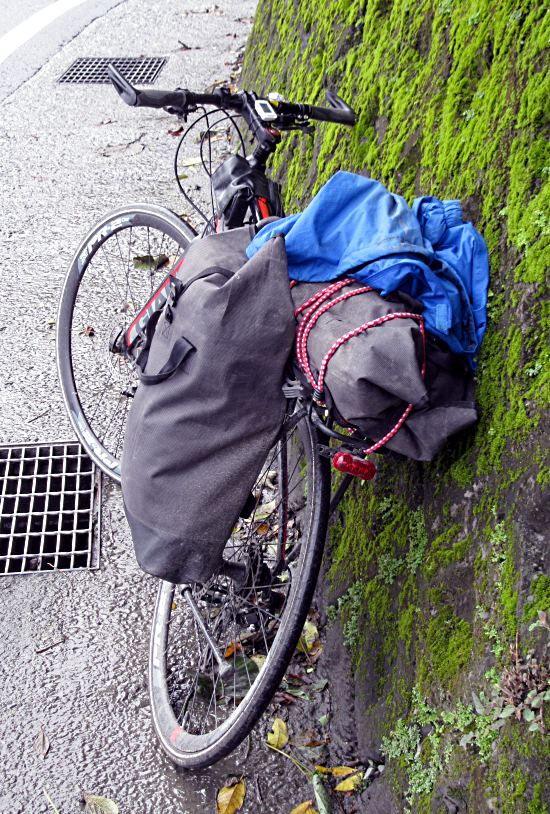 Our ongoing problems with rubbish panniers struck me this time. They’re the ones supplied with the hire bikes, and have to use them – you’re not supposed to use your own.

Problem 1 is their capacity, which is slightly more than a waistcoat pocket. Problem 2 is the clips, which have the robustness of potato crisps. One on my right pannier went, and it’s now useless. We had to buy a bungee from a village store which was about twenty feet long and use it to lash the offending item to the rack (pic).

So, Mazu, you may be made of jade and weigh 600kg, but we know where not to come to pray for smooth cycling trips. 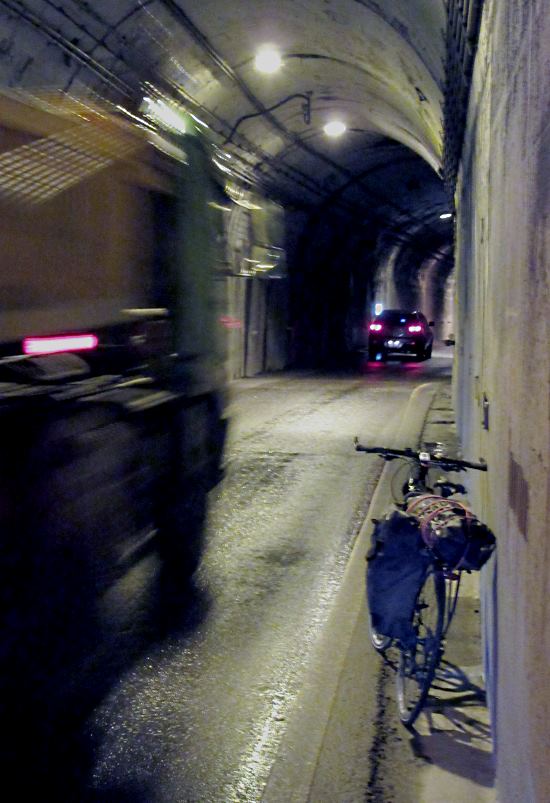 Much of the road is dangerous not in a Bolivian Death Road way – there are no unfenced sheer drops – but because of the millions of passing lorries and the presence of a four foot deep drainage ditch immediately to your right.

I had to be careful, because one lapse of concentration and the whole journey could be over in a flash. The journey that started on 3 September 1960 in Ferriby, that is.

But at least in the tunnels there was no such drainage ditch. Instead the threat here was being squashed by passing trucks (pic). 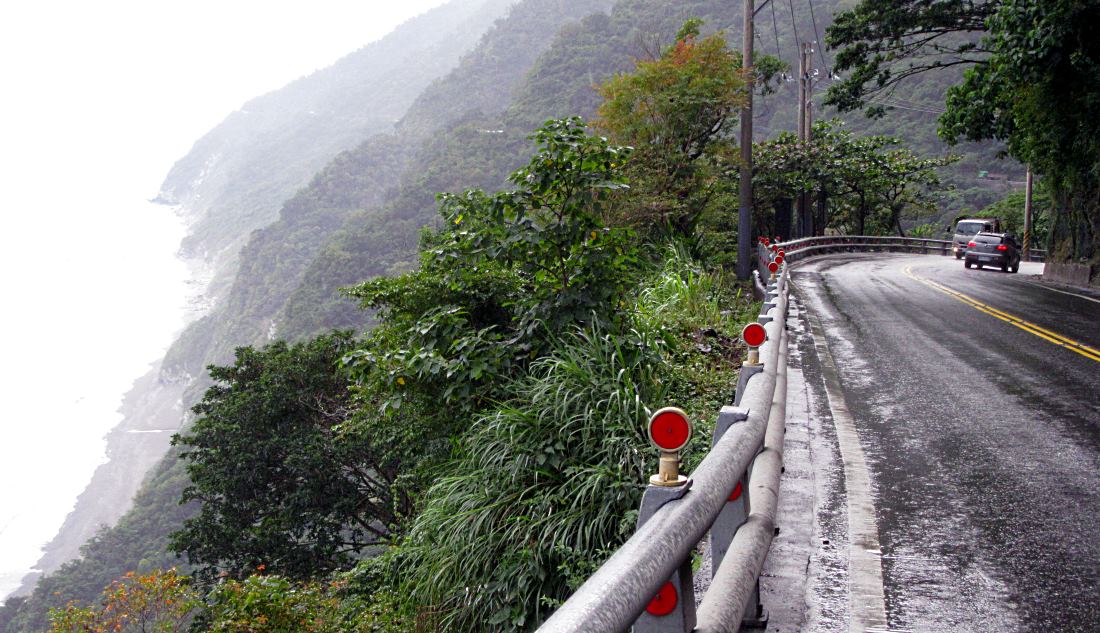 But the coastal scenery was spectacular (pic). There was quite a lot of this sort of thing, which made us exhale sharply for the right reasons. 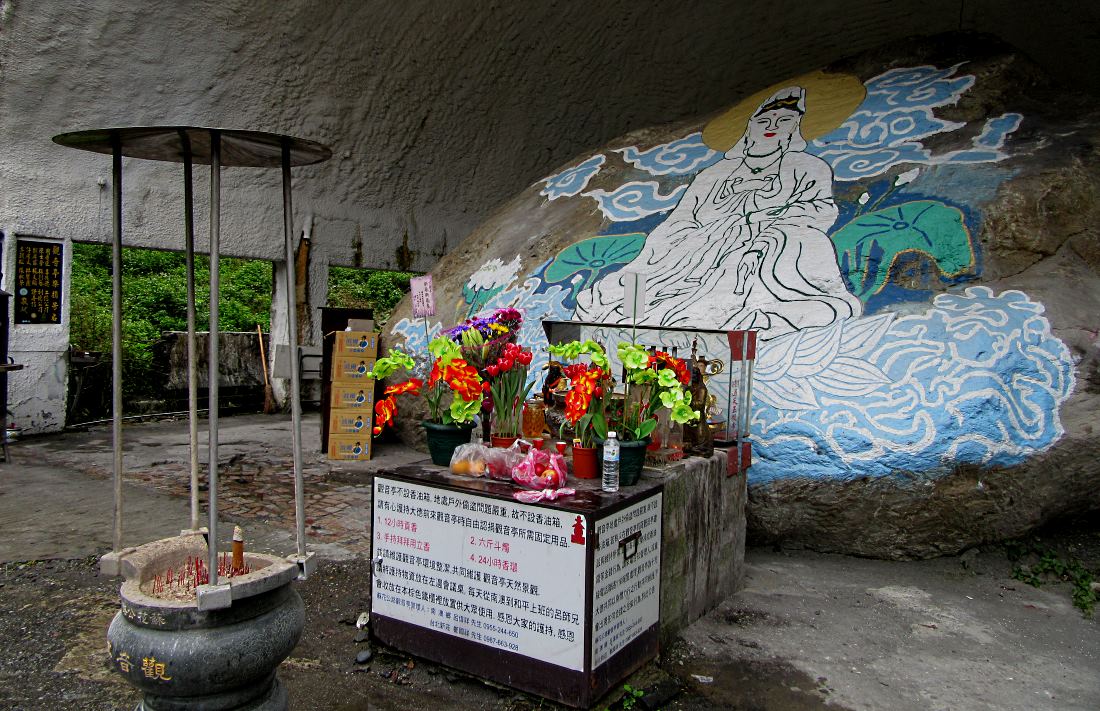 And actually, it turned out to be a very enjoyable ride, traffic and occasional showers and looming ditch disasters notwithstanding. So we stopped near our final descent into our evening stop of Heping to give thanks at this roadside shrine, not to Mazu, who seems as useless as a Giant pannier when it comes to ensuring cycling good fortune, but to Guanyin (pic), the female bodhisattva of compassion, and functioning bike accessories.