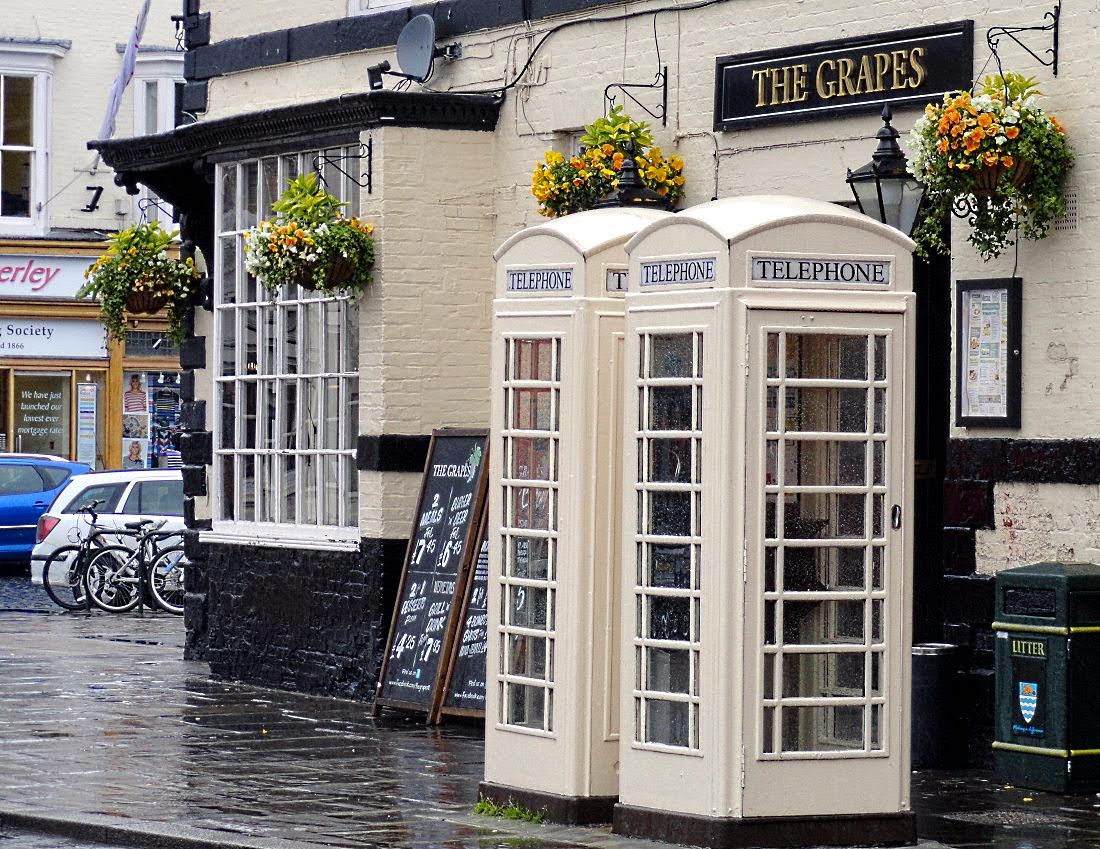 Beverley (picture), at the edge of the gentle Wolds, is one of our great secrets: a fine, characterful Georgian market town with its own brand of Yorkshireness.

While it has plenty in common with the county’s other market towns such as Richmond – a fondness for turning potentially pedestrianised-showcase market squares into car parks, for instance – it’s also distinct, very much East Riding rather than North or West.

So, brick houses, not stone; lumbering cattle, not windblown sheep; the flat vowels of the eastern plains, not the vocal hills and valleys of the moors or dales. And white, not red, phone boxes (picture): a reminder of Hull’s unique independent local phone system in pre-privatisation days. 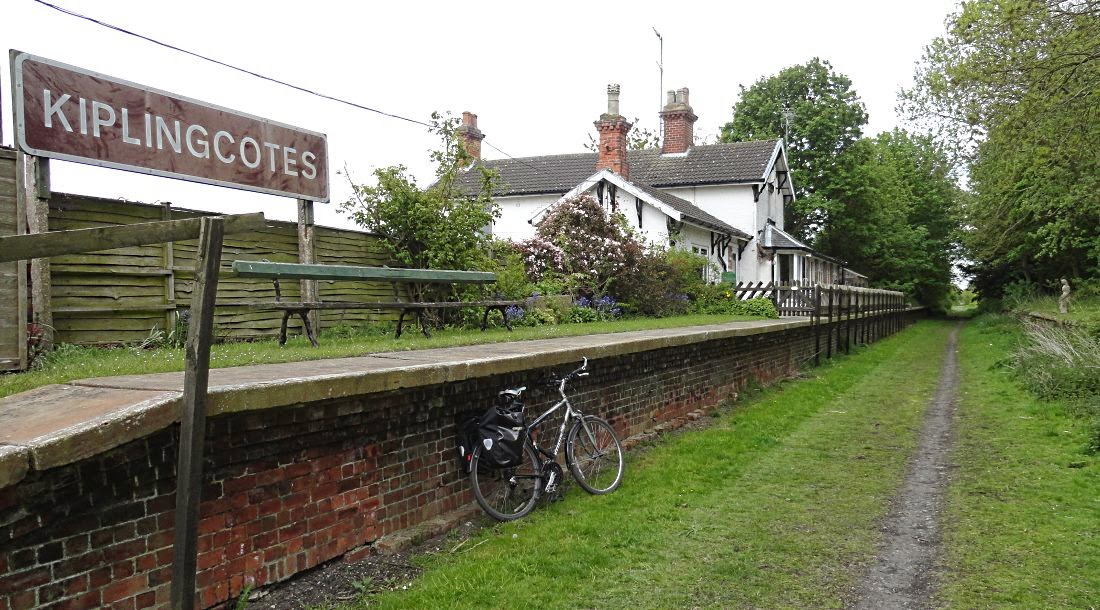 The cycle from Market Weighton was a pleasant trundle along the Hudson Way railtrail (picture) – another legacy of the evil Doktor Beeching, Bond-villain of the train world.

Kiplingcotes Racecourse, just by the station here, is the home of Britain’s oldest horse race: its Derby has been run every year since 1519. Astoundingly, every single race has been won by the bookies. 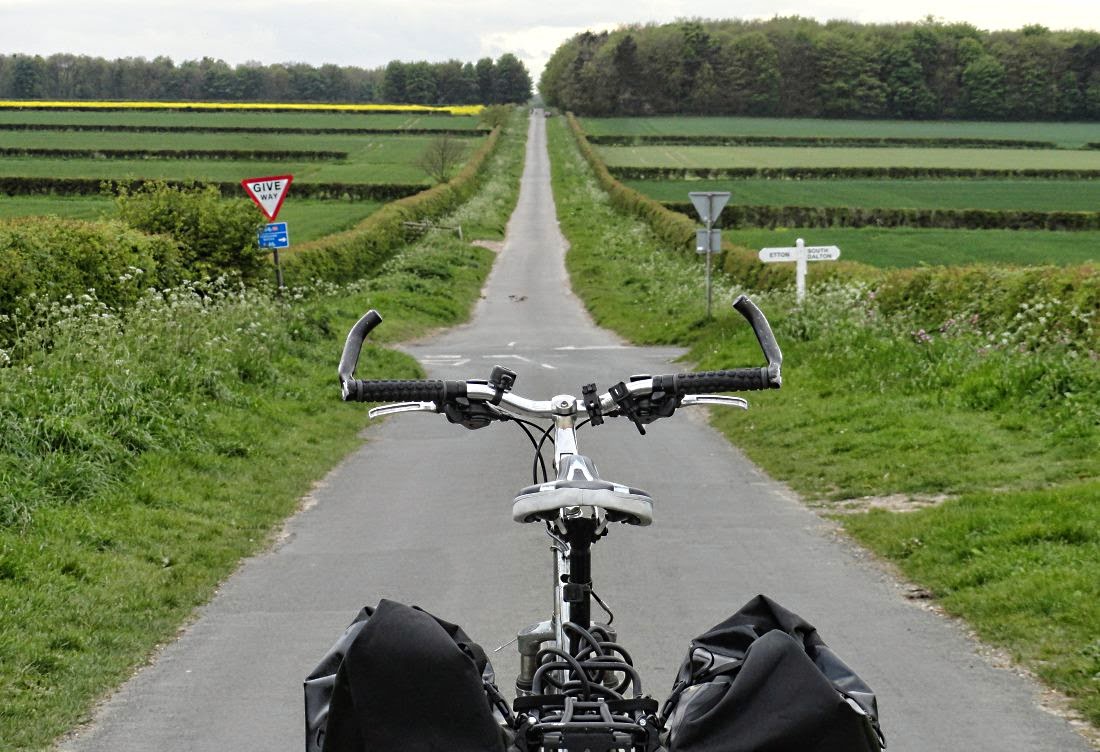 Railtrails in Britain are often something of a punt, too. While the Hudson Way is no problem for a mountain bike, I usually felt the parallel country lanes (picture) were a better bet.

With a tailwind on a cool, tranquil May evening, almost totally devoid of traffic and embellished by birdsong, cycling through this gently rolling, reassuring rural landscape was a lovely little experience.

I’ve been to Beverley many times. I grew up (though my friends might dispute that term) a dozen miles away. But this was the first time I’d visited by bike, as a tourist.

And what a beautiful approach it was, into the town from the north, along grand early-19th century terraces that spoke of a wealthy mercantile past. Beverley had somehow got grander from when I last visited, two days before by car. The drizzly snap of the market square (picture) doesn’t do it justice. 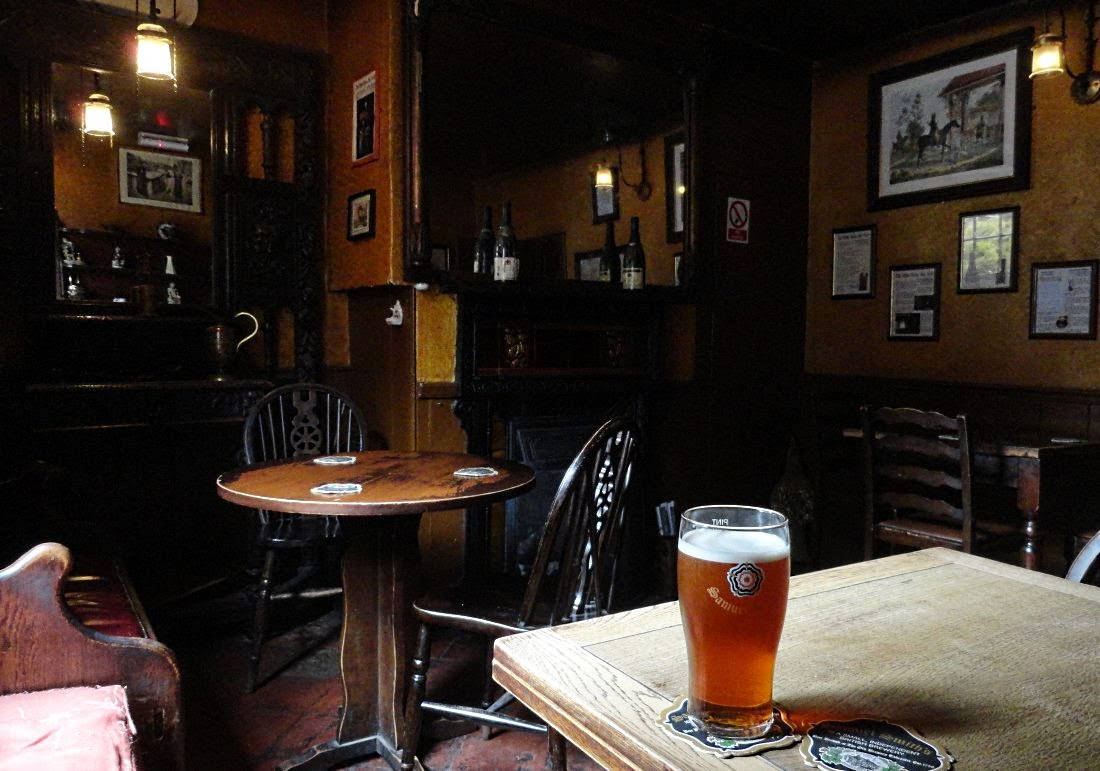 I passed through the famous old red-brick gate, the North Bar. (It was built in 1409; clearly not by the firm that did my extension in 2011, because it’s still standing firm and solid today.) Remember that here in East Yorkshire, a street is a ‘gate’, a gate is a ‘bar’, and a bar is a ‘pub’.

And the quintessential Beverley pub is the wonderful White Horse Inn (picture), aka ‘Nellie’s‘. So I relaxed with a couple of pints of Sam Smith’s bitter, £1.80 a pint. That’s not a misprint, special offer or journalistic device (aka ‘lie’): that’s the regular price.
Nellie’s hasn’t been redecorated for about two hundred years, and its colour scheme has something of a brown theme: chestnut-brown, nicotine-stain-brown, soil-brown, and, er, other types of brown, the sources of which the traditionally agricultural clientele would have been odorously familiar with.

It was friendly, good-humoured and full of locals discussing their latest Premier Inn deal or Skyscanner bargain. Sociable, a little damp-smelling, discoloured and dim, I felt right at home.

I also had a quick cycle round Beverley Westwood, which sounds like an American golfer but is in fact a tract of countryside perfect for picnics, when it’s not actually raining. It’s right on the edge of the town centre (picture), characteristically East Riding and pastoral.

The racecourse is here too, and every year since 1519, bleary men in suits and tipsy women in frocks have staggered back to the town to miss their coach home. 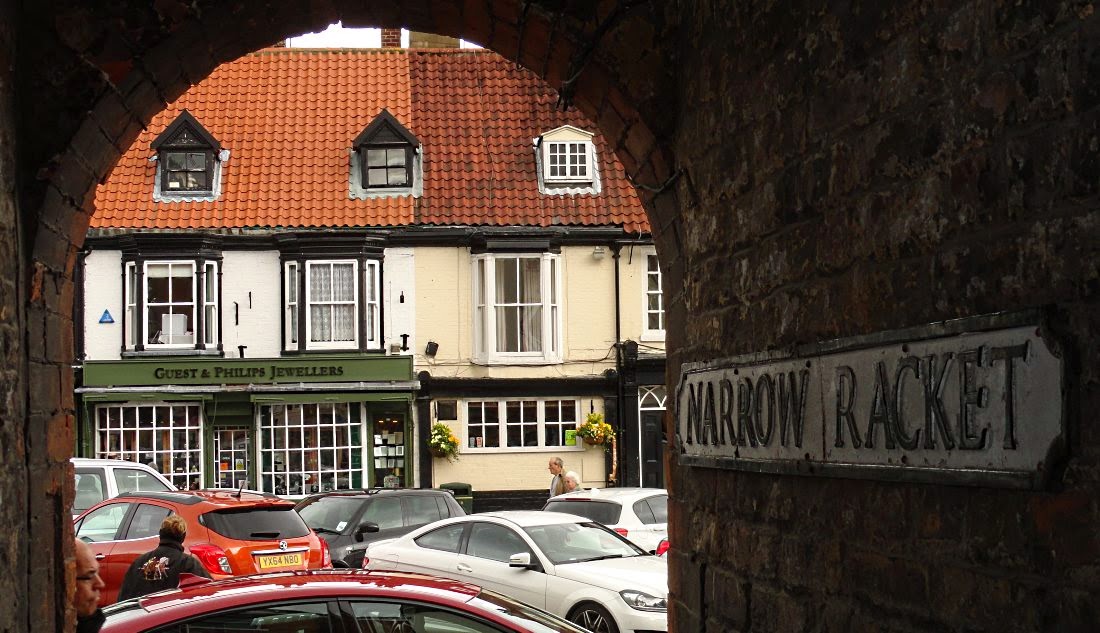 It also does a very nice line in walks round the centre (tourist info is available from Tourist Info) that invite you to spot subtly hidden statues, plaques and artworks: particular fun for naive young minds, such as those inside the head of cycle bloggers forced off their bikes by the drizzle. 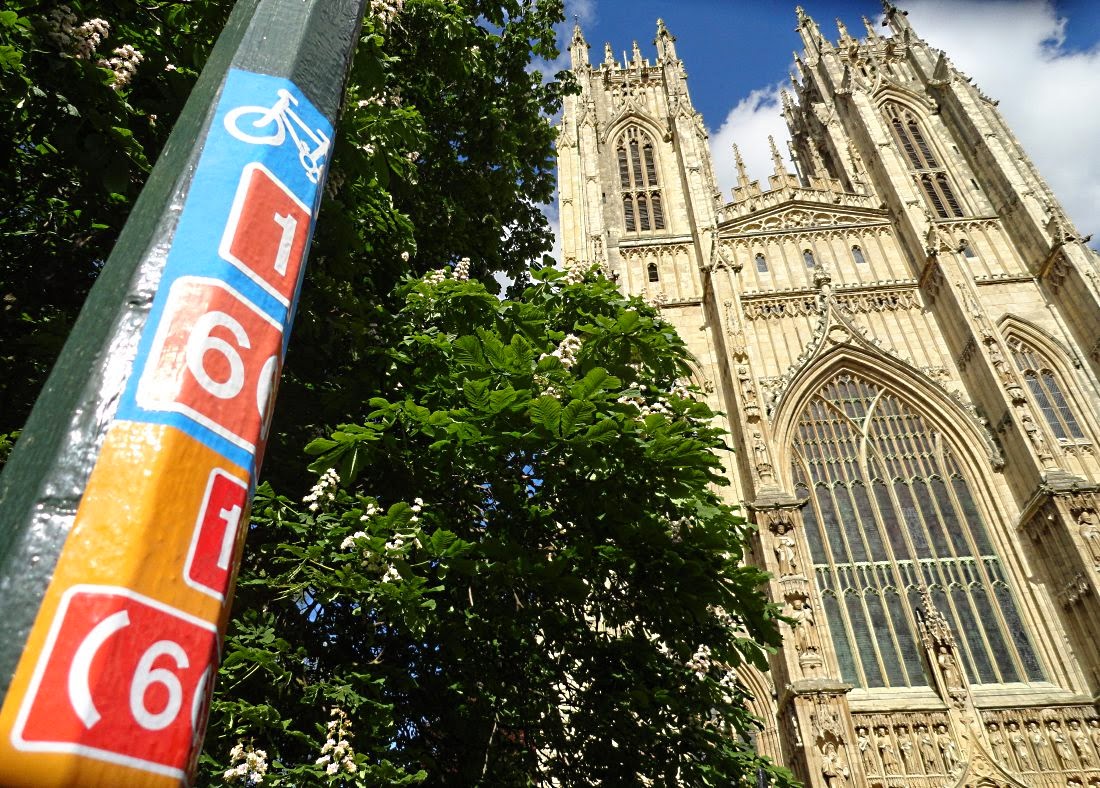 Curiously obscure in the town – though it dominates the skyline if you’re outside in the country – is the awesome, and deservedly celebrated, Minster (picture) – conveniently, right on several long-distance Sustrans bike routes.

But being Beverley, there’s much more, unsung, stuff where that came from. St Mary’s, at the opposite end of the centre, is a superb church that would be a famous market-town gem by itself if not for the Minster, perhaps the country’s most splendid ‘parish church’.

(Lewis Carroll got his White Rabbit character in the Alice books from a strange lagomorphic carving inside St Mary’s.)
I liked Beverley a lot, despite the grey weather, surfeit of mid-market Italian restaurants, and mystifying shortage of central chip shops. The surrounding countryside is pleasant, though you wouldn’t come here to develop your career as a landscape painter. (The town’s favourite native artist, Fred Elwell, specialised in comfy Edwardian middle-class indoor scenes; pictures of his adorn many town walls and of course there’s a ‘Paint the Town Fred’ walk.)

But it has that elusive balance of East Riding and mainstream-Yorkshire, of market-town compactness and service-town facilities. Beverley’s economy is developing steadily too: a Carluccio’s is arriving, and a Wetherspoon’s. (Though even they will struggle to match Nellie’s on price, as well as on worn-out dark-wood furnishings.)

I’ll be back soon. And by bike.