On my bike tours, I take a day off roughly every week. I find it helps prevent build-up of niggling injuries, sore knees and so on. It also reminds me how much I dislike buses and footslogging round towns with a guidebook tick-list, so I’m keen to get back on the bike next day, enjoying it that much more. (I also have a day off the beer, with similar effects.)

So today was my non-riding day, based in Manzanillo, and I spent it in the nearby town of Holguín, the Caribbean equivalent of Burton-on-Trent. Tadcaster with palm trees. Masham with sugar cane.

I chatted to my casa host over a breakfast of coffee, rolls and some tropical fruit. I was slightly put off by the strange purplish colour and unappetising, oily appearance. Of the host. The breakfast was fine. 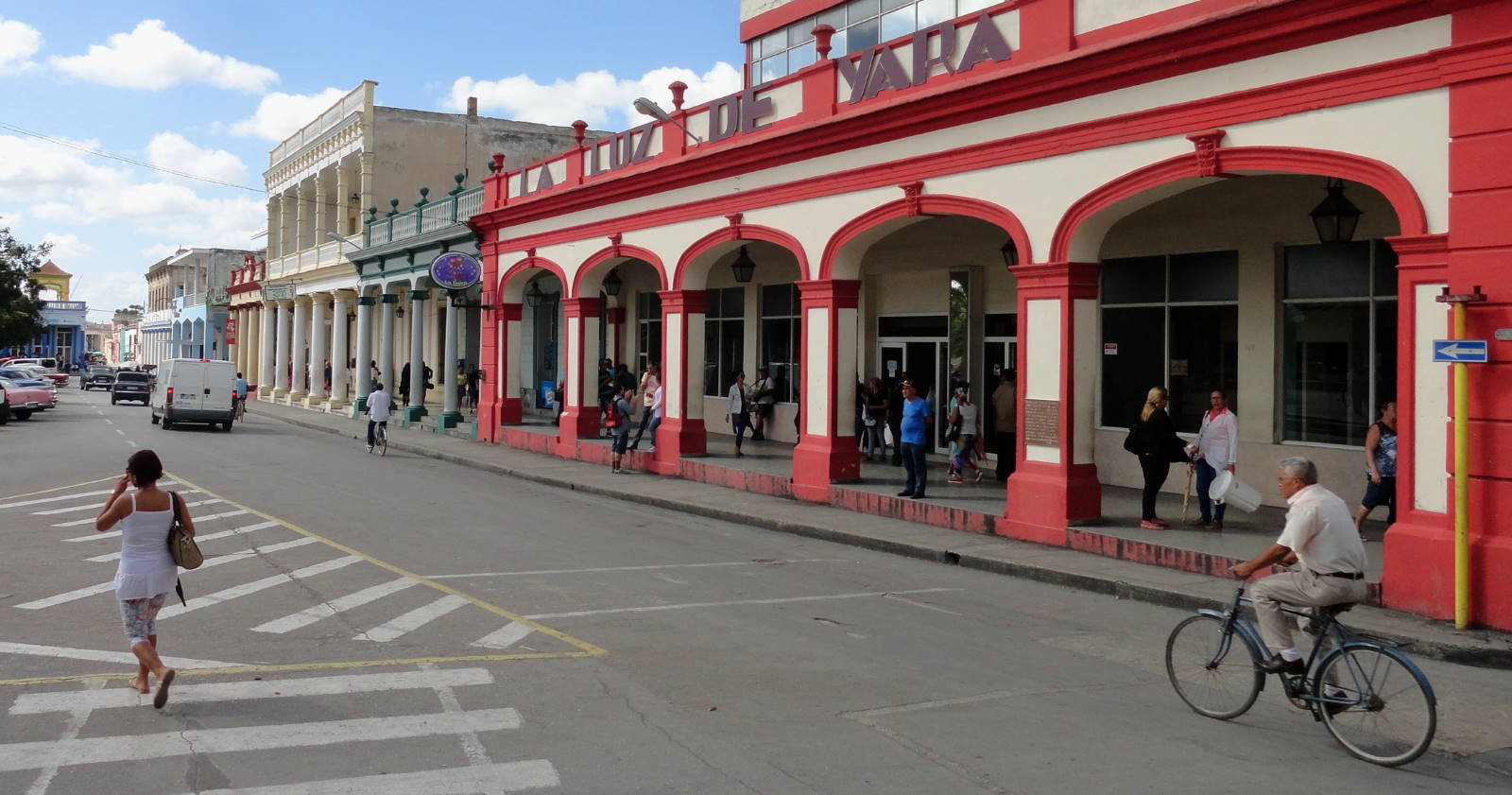 But the landlord did have some vital tips on how to do my journey on the cheap: rather than take a private taxi to the mildly touristy town – $20 each way – I could take a colectivo (shared taxi) from the station front round the corner for 30 pesos, less than a twelfth of the price. An hour later, having lucked out by getting the sole-occupancy front passenger seat rather than the five-people-in-three-spaces rear bench seat, I was in Holguín (pic). 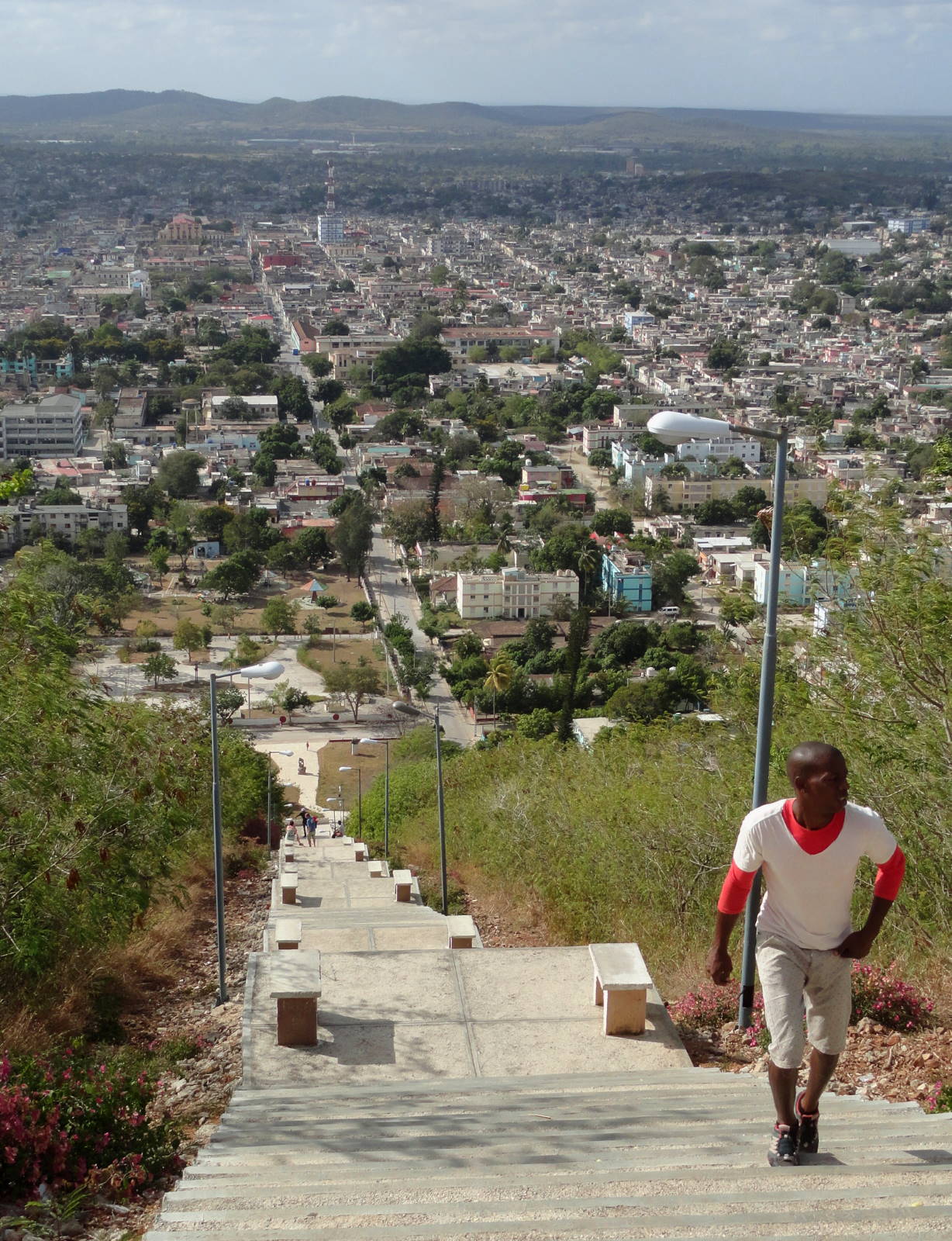 The town is known for its art galleries (which I didn’t spend much time over).

It is also the home of three breweries, including the ubiquitous Bucanero and Cristal (which on this trip I am spending rather a lot of time over).

However, I had mainly come for the splendid panorama earned by a short steep walk from the centre to a ridgetop park (pic). 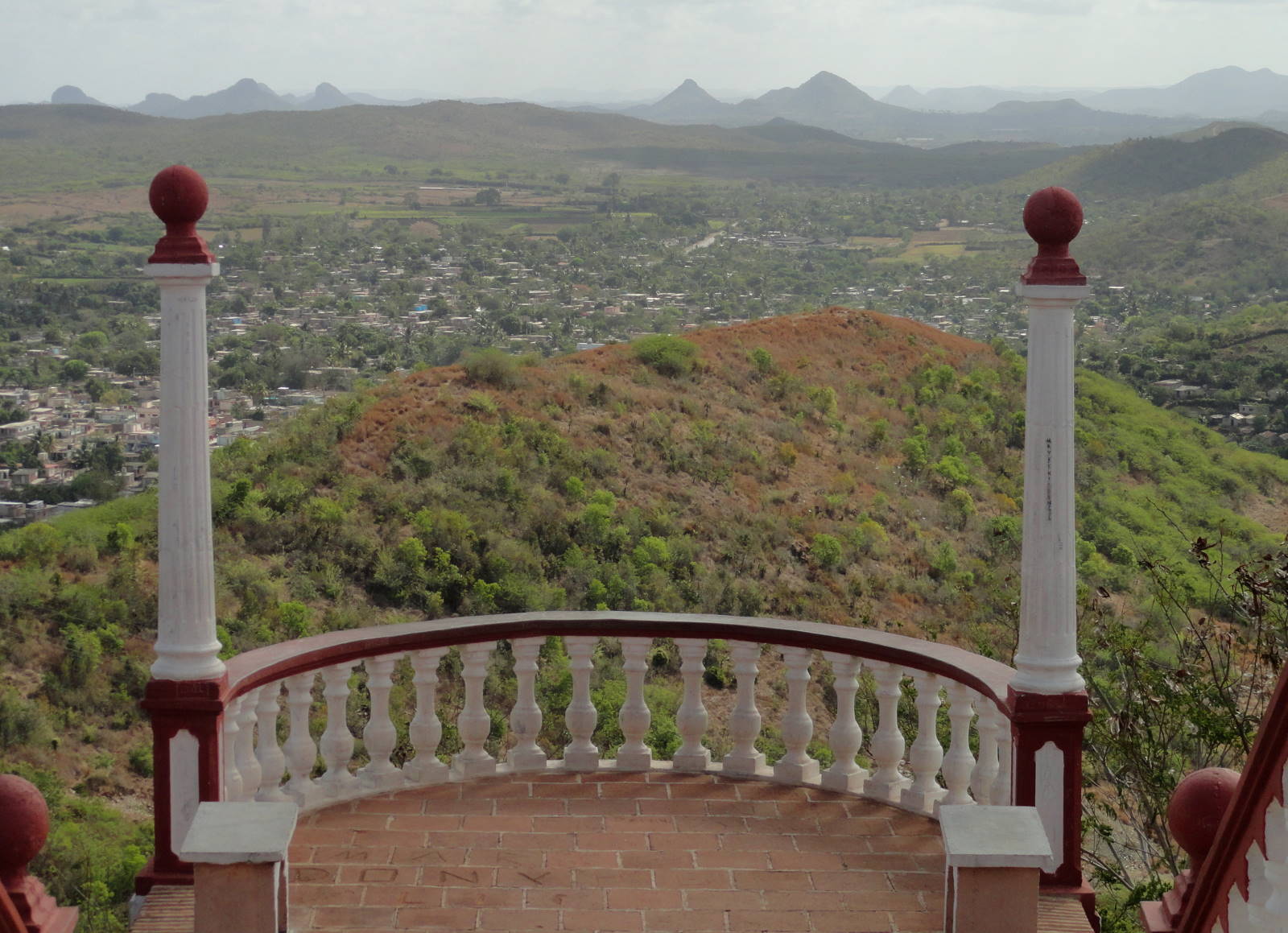 I strolled up there for the fine view (pic) and ambled around. Some buskers on flute and guitar struck up a version of The Birdie Song, which had an electrifying effect on me. I hopped back down the stairs to the centre as fast as I could.

I sipped a coffee in a pavement cafe in this relatively well-to-do town’s central square (pic).

Now and then I’d hear Canadian voices: though US citizens are effectively banned from Cuba by their own government, those from north of the border are free to come. Holguín is something of a destination, even residence, some of them. (There’s a Canadian consulate here.) 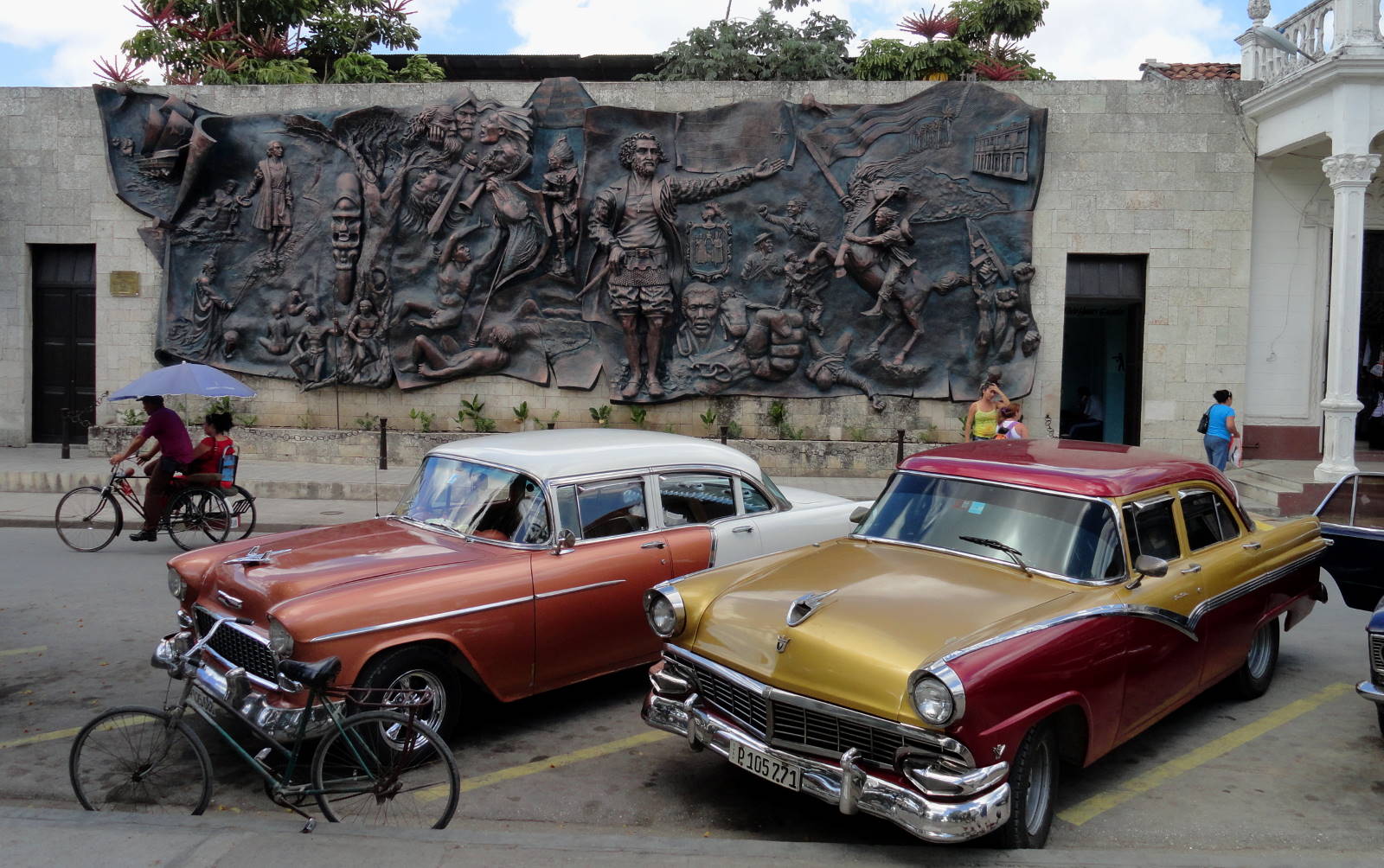 As in all Cuban towns, there were lots of 1950s cars, in various stages of preservation (pic)… 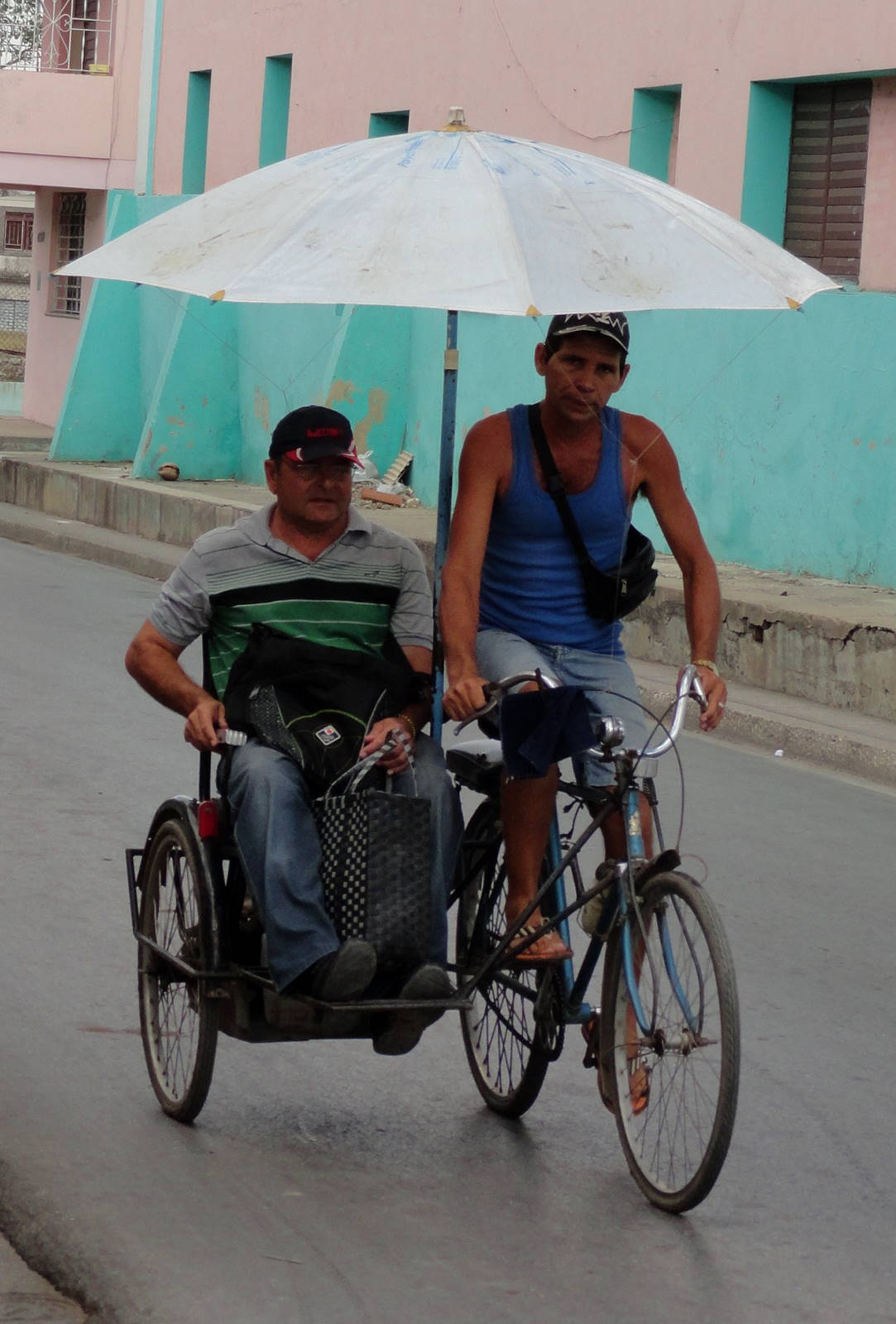 …and plenty of bike taxis and pedicabs (pic).

My journey back to Bayamo was definitely ‘authentic’, in the sense of ‘uncomfortable’. It was in a cattle truck repurposed as a windowless public bus, jammed full of sitting and standing locals, clonking and bumping its way between countless stops on the tortuous two-hour journey.

(I recall they rushed me an arbitrary foreigner’s rate, maybe $2, instead of the local fare, 5 pesos – still much cheaper than a taxi though.)

Gratefully back in Bayamo I had a couple of batidos (smoothies) at the Nectar cafe by the main square. A German couple had no pesos, so I generously bought them theirs: 12p well invested in the Anglo-German Freundschaftsstiftung.

Back at my casa I lay down to avoid the heat and spent the rest of the day quietly inside. Not only no cycling today, but no beer. And, to further emphasise the absence of pleasurable stimulation, an evening watching TV baseball.