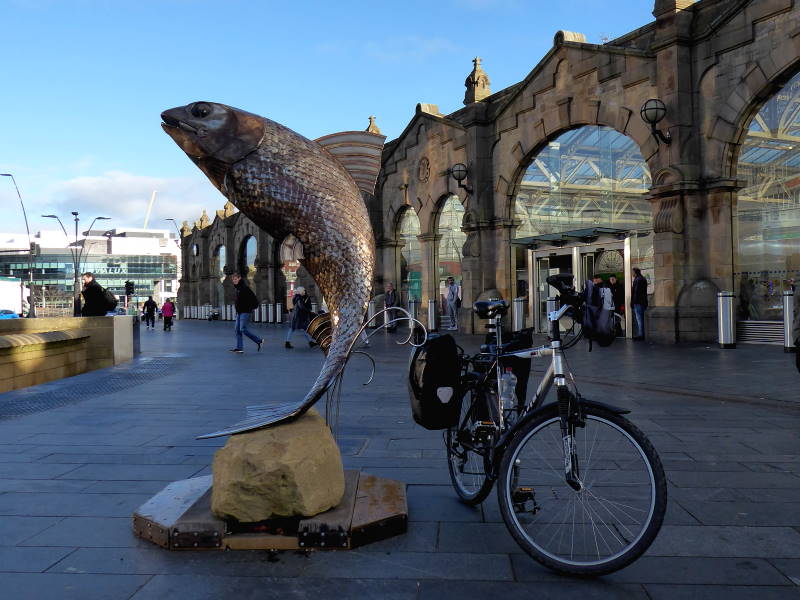 We all have ups and downs, but a paternoster – half-escalator, half-lift – has both at the same time. Britain now has only two or three working examples of this slow-motion, low-tech version of the Star Trek transporter beam… and one of those is in Sheffield University’s Arts Tower, appropriately the home of their architecture division.

So, as so often, Yorkshire leads the world in obsolete technology.

And, of course, our paternoster is best visited by bike, thanks to cycle paths from the train station. Which is what I did today. NCN6 takes you through the centre towards the university. At one point you have to cross the supertram tracks and get on to the parallel Cycle Ring Route, which goes up to the Tower. Supertram? I’ve never been a fan. Breakfast in America did nothing for me.

You can’t take a bike inside the paternoster, though. Even a folder. Because no luggage is allowed in the 38 open-fronted, phonebox-sized cabins which loop endlessly, half of them up on the left, half of them down on the right.

Like lifts, they go vertically. But like escalators, they move constantly: you have to pick your moment to step on or off. A 1960s-vintage square light shows the floor number in red (wait) or green (go, Go, GO, GO NOW, ah, too late, now you’ll have to go all the way round again) to guide you.

The machines enjoyed some popularity but safety concerns saw them fall out of favour, and several people fall out of them. By the late 20th century most had been replaced by conventional lifts. However Germany, with its love of engineering, has retained many paternosters in private buildings, rarely open to the public though.

The paternoster is a handy way of skipping up or down a floor or two, as (unlike a lift) there’s no waiting time. However, they move so slowly – Sheffield’s takes 13 seconds per floor, hence nearly five minutes to ascend 22 levels from the lower basement to the 19th floor – that conventional lifts are much faster for longer journeys. If you buy a coffee in the basement cafe to take up to your study space on the 17th floor it’ll be cold by the time you get there.

There are many safety devices on Sheffield’s paternoster. If you catch your foot on the protruding step as you rise past a floor, the flap rises and triggers an alarm which stops the lift. There are emergency stop buttons to press and communication cords to pull on every floor.

Going over the top or under the bottom poses no danger – the cabins don’t flip over, they just shuffle across. However, it’s discouraged because there’s winding gear exposed to the open-faced cabins, and some of the students riding it may be law undergrads specialising in compensation claims.

Sheffield’s Arts Tower is an imposing building in its own right, opened in 1966 (in a time so distant, they actually paid you to be a student) and an impressive part of the campus’s architectural variety. Ride to the 17th floor in the paternoster – or, if you have a folding bike with you, the conventional lift alternative opposite – and you can admire the view to the north from a lounge area. (The other directions have study rooms only for student use.)

One of the landmarks is Hillsborough, home of Sheffield Wednesday, something else that has had constant ups and downs.

The public seem welcome to wander into the Arts Tower and use the paternoster. There’s cycle parking outside, most covered, including a track pump. Very unusually for public-use bike pumps, it was working fine on my visit.

The only other surviving paternosters in the UK are said to be at the University of Essex library in Colchester, and – perhaps – at Northwick Park Hospital in London, restored in 2020. How easy it is for the public to enter either, though, I don’t know. So Sheffield’s paternoster is, it would appear, the biggest and the best.

It may be old and slow, it may have been superseded by bland though more efficient rivals, but

it’s a dogged survivor of those heady optimistic 1960s. It has its ups and downs but it’s still going strong.

Funny, all that applies to me too.