Yorkshire is proud of its ancient traditions. Someone has blown a horn every night for 800 years in Ripon, for instance. The neighbours must be fed up of it by now.

And we can boast England’s – maybe, pace Siena, even the world’s? – oldest horse race (pic). Every third Thursday in March since 1519, local riders have galloped it out at the Kiplingcotes derby, over a makeshift course in the Wolds just outside Market Weighton. 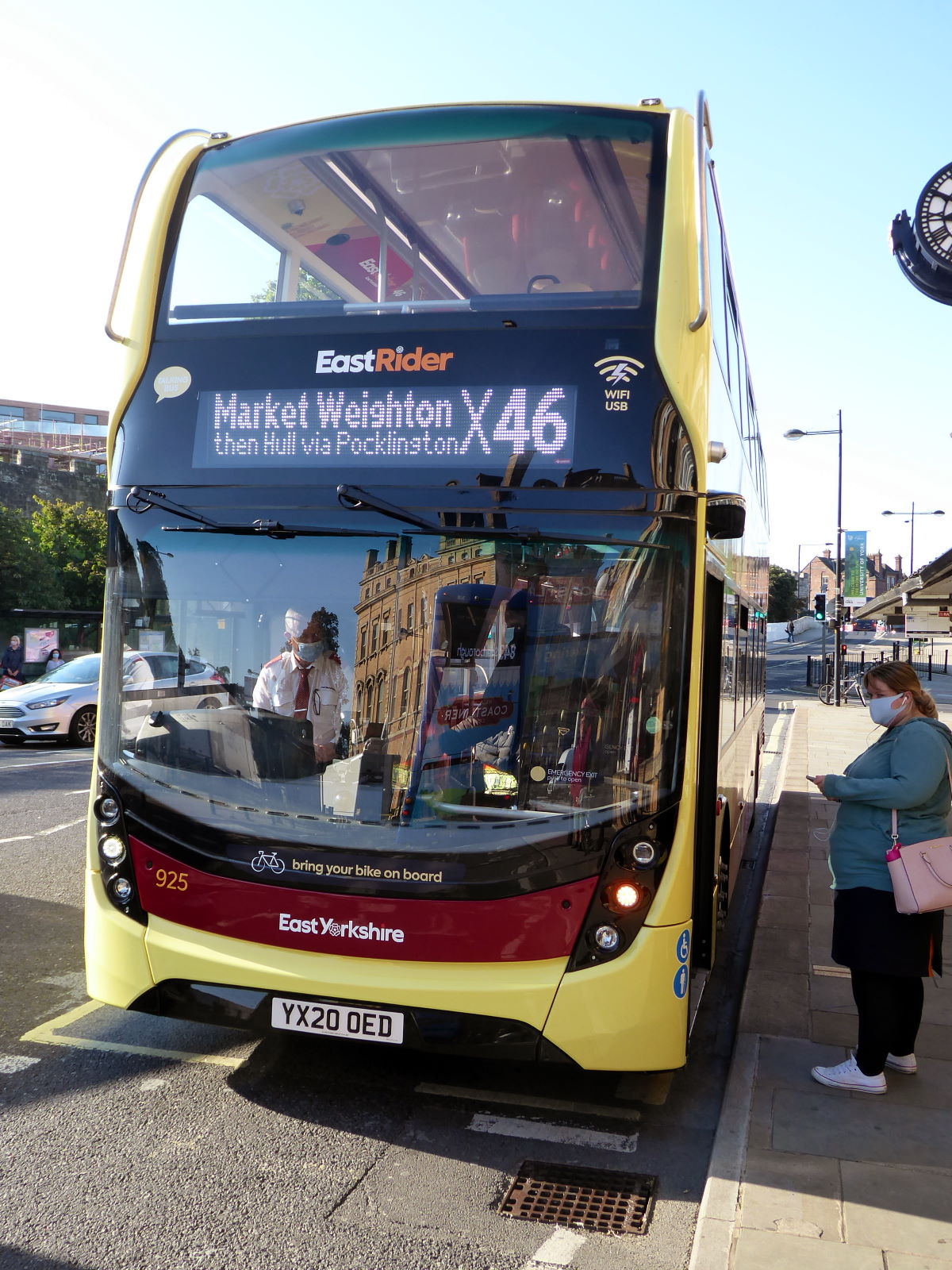 Riding the ‘course’ on any other day of the year makes for a fine half-day ride: scenic, tranquil, gently sloping, tranquil.

Making it easier now are the brand-new East Yorkshire buses on the X46 service, shuttling hourly between York and Hull via Market Weighton (pic). 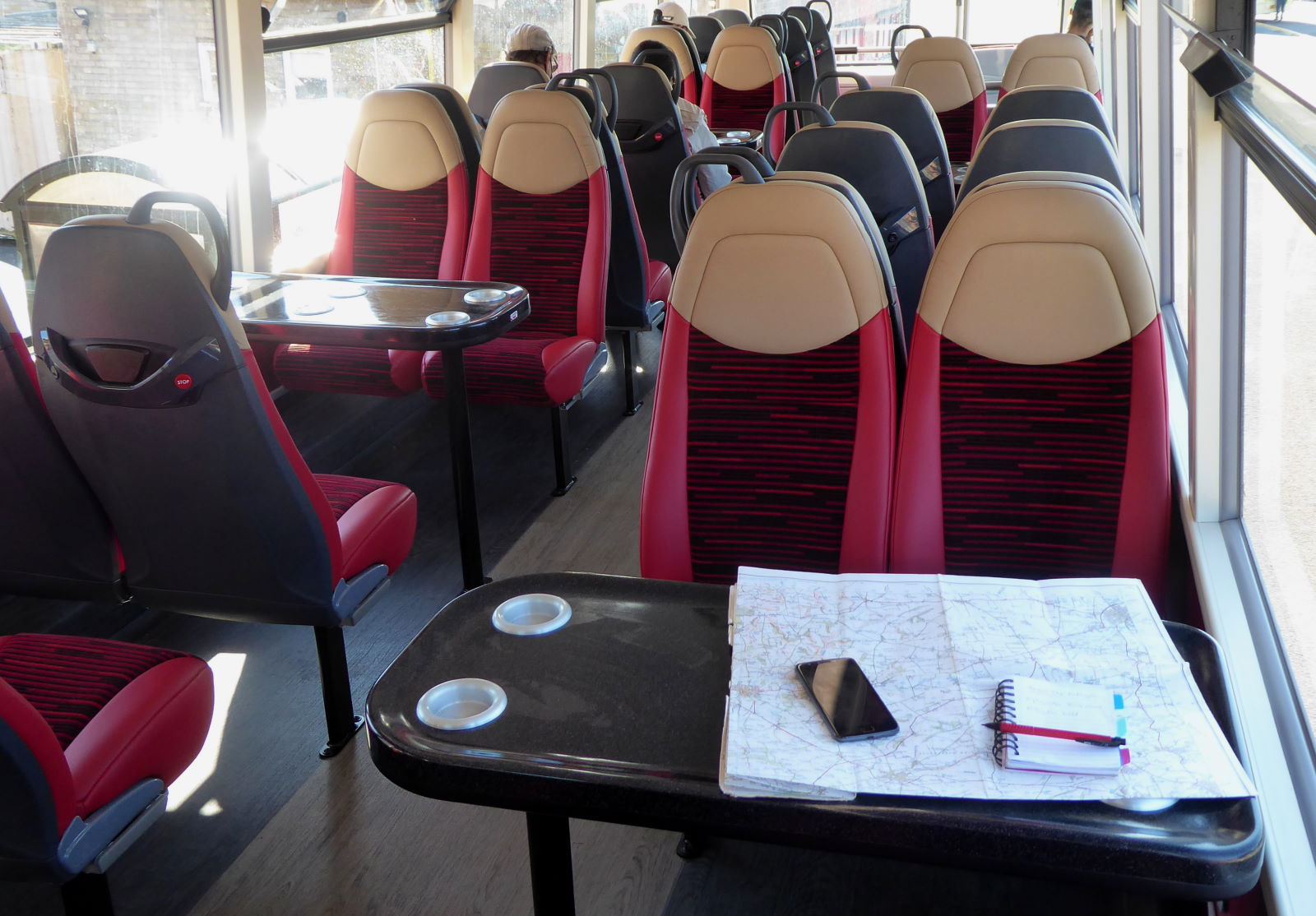 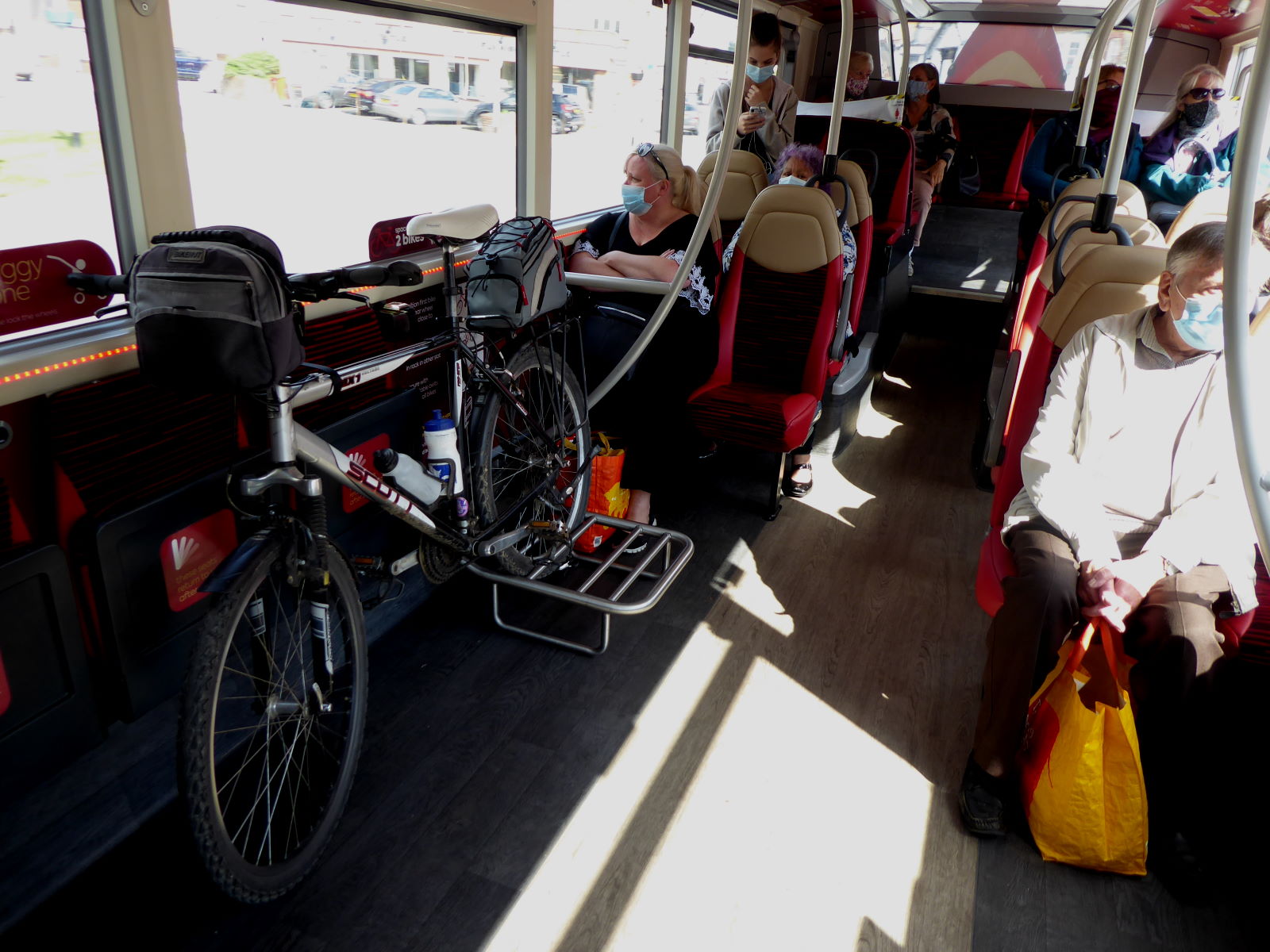 …and free space for two bikes (pic). (No toilets, alas, which is an issue if you have a bladder like mine the size of a teaspoon. So I’d advise skipping the morning Americano.)

Taking your bike to Beverley (or even Bridlington, on the similarly well-endowed 45 service) is now possible, though the length of those journeys makes the train a viable alternative, especially to coffee lovers. But for me, and probably for you too, the great new opportunity afforded by the X46s is routes involving Pocklington and Market Weighton. They’re both gateway towns to the lovely Wolds (pic) – but riding between York and either of them involves some rather so-so flat cycling. The bus avoids all that.

So, today, I enjoyed a fabulous 20-ish mile ride on a sunny day from Market Weighton to Pocklington via the Kiplingcotes ‘racecourse’, as well as the village of Warter, and the breathtakingly beautiful dry-valley road to Millington. 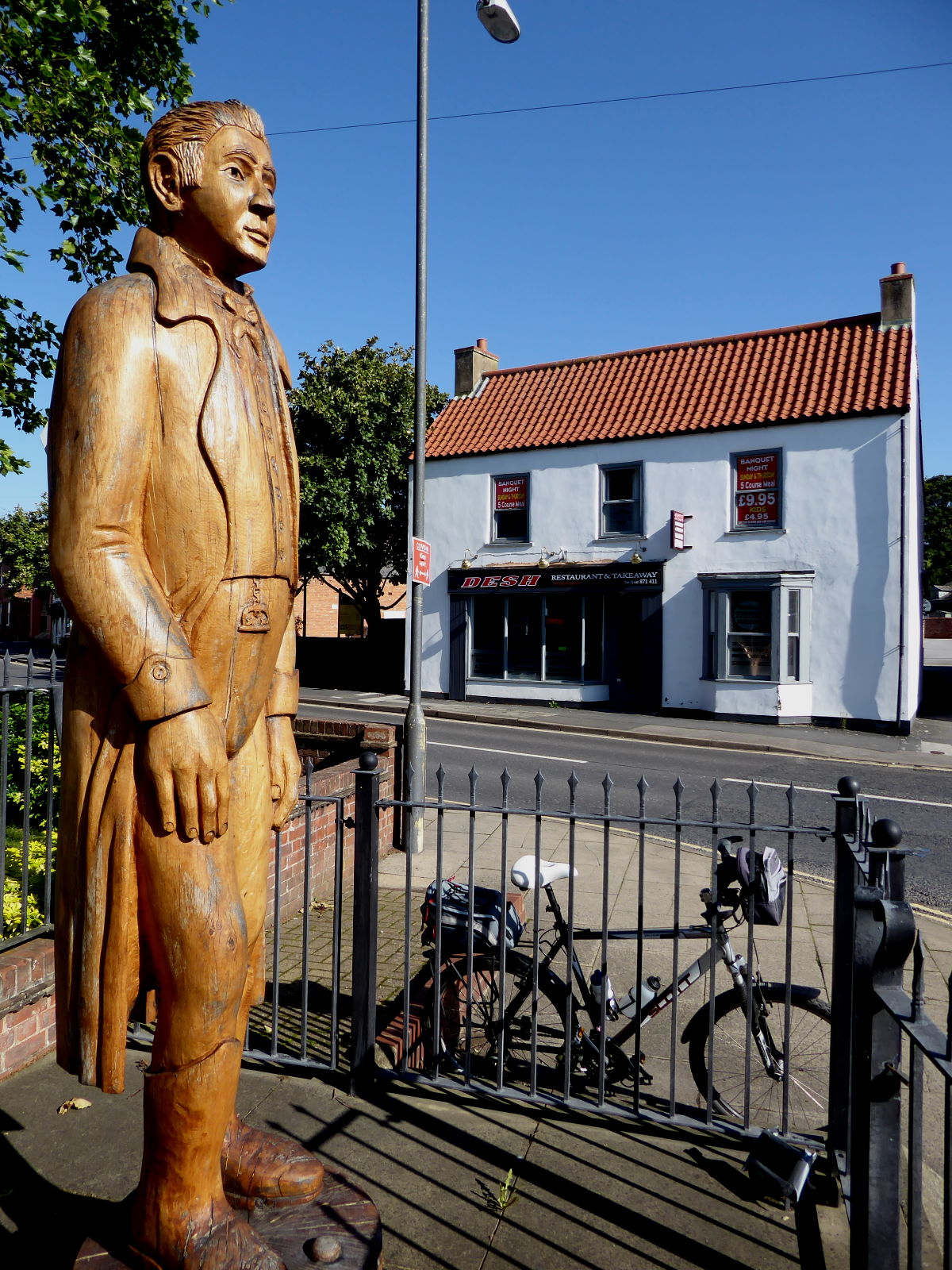 On a dry, gorgeous early-autumn day like today, it was a delightful, quiet little adventure.

I decanted myself from the bus in Market Weighton and paused to admire the life-size statue of William Bradley (pic), Britain’s tallest man ever at 7’9″, or 2.36m.

By my calculations he’d have required a 36-inch frame, if bikes had been around in 1810. 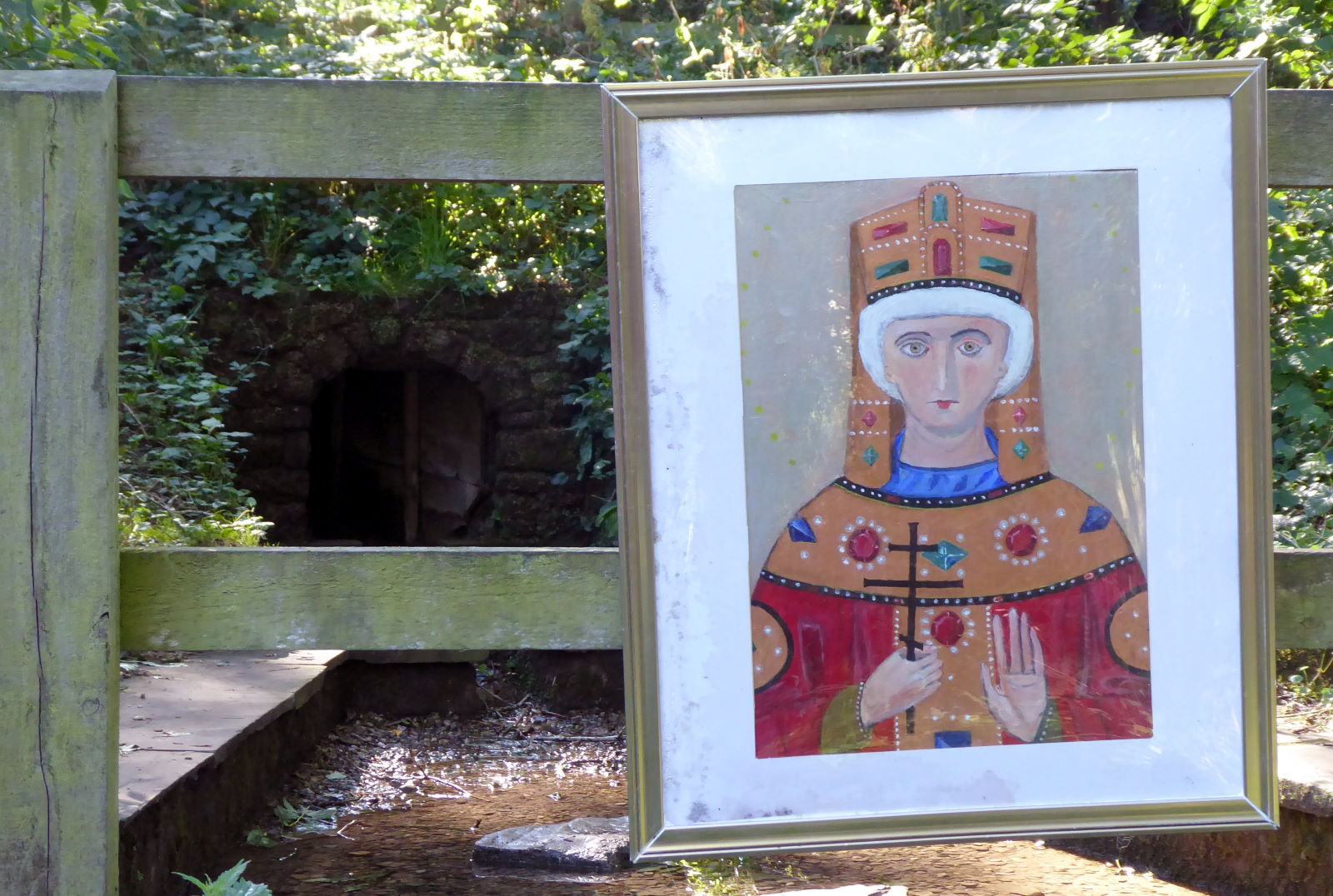 Just outside Market Weighton is St Helen’s Well (pic). The immediate area was one of the first footholds of Christianity in England in the early 300s, and this is one of many sites connected with that. Helen (c248–329) was the mother of Constantine, who was proclaimed Roman Emperor in York in 306; she was Greek and never visited Britain, let alone Wolds market towns. I didn’t make a wish because I had no coins to throw into the well, and there was no way of paying contactless, so no new bike for me yet awhile.

So to the races. The single quotes around Kiplingcotes’ ‘course’ tell you not to expect Aintree. Aintree it ain’t. It ain’t even Ree. 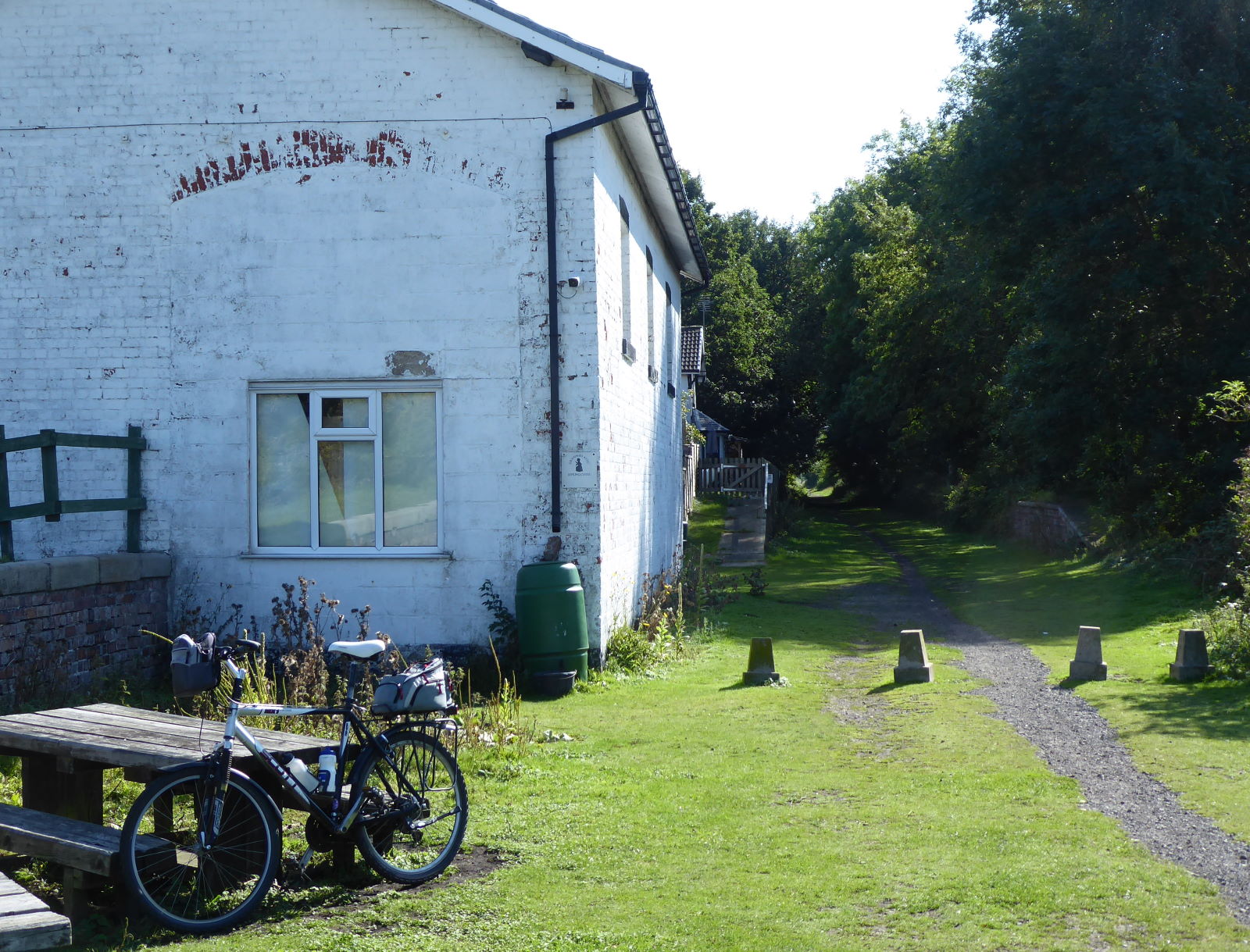 The grand start, for instance, is on a country lane in the middle of nowhere. There’s no village or hamlet called Kiplingcotes – only this station (pic), once a landowner’s personal halt on a long-defunct rural railway line needlessly axed by the crazed arch-villain, the evil Doktor Beeching. 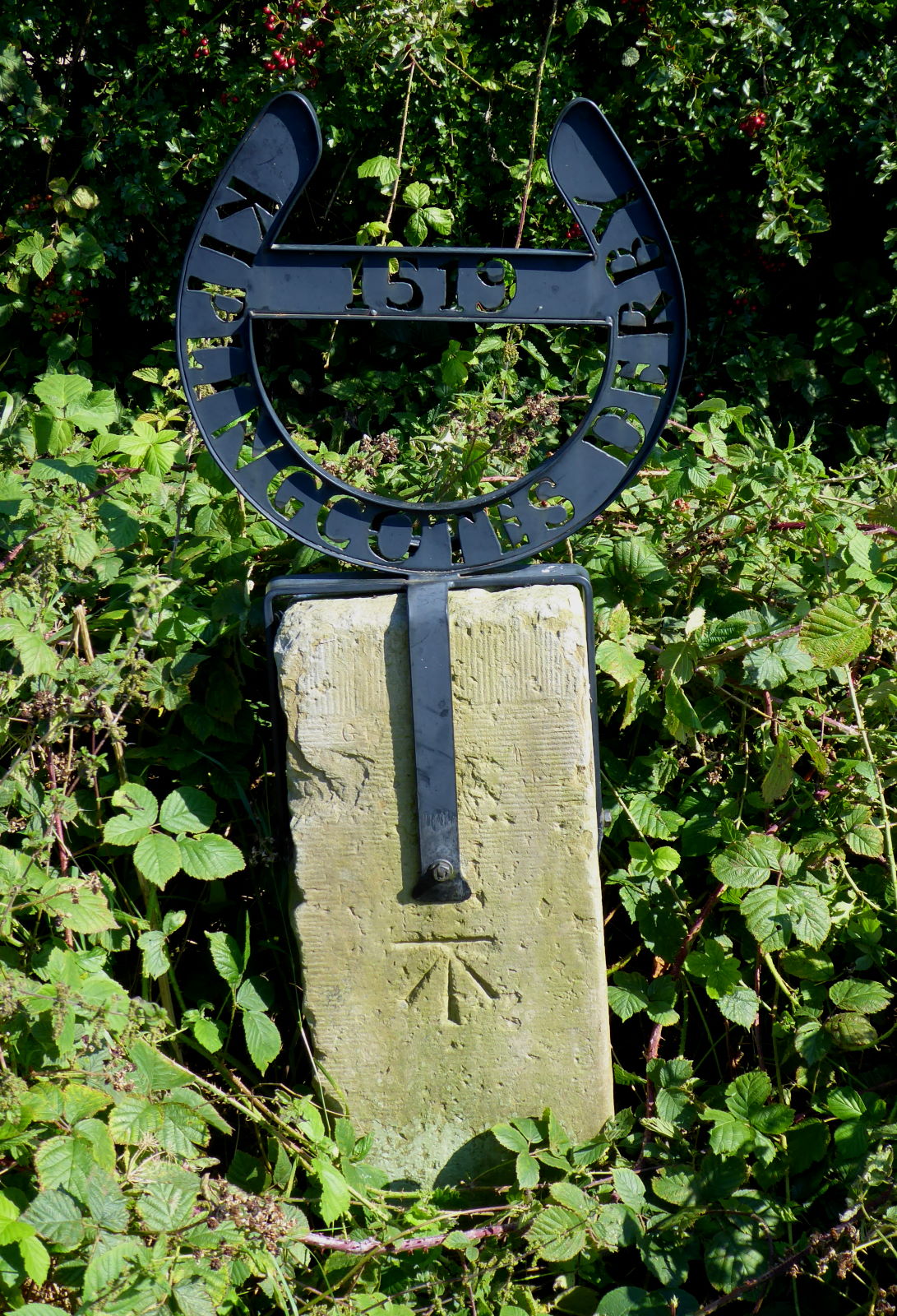 This is the start. Horses and riders gather at this modest stone (pic), marked on Ordnance Survey maps since 1873 as ‘Post’… 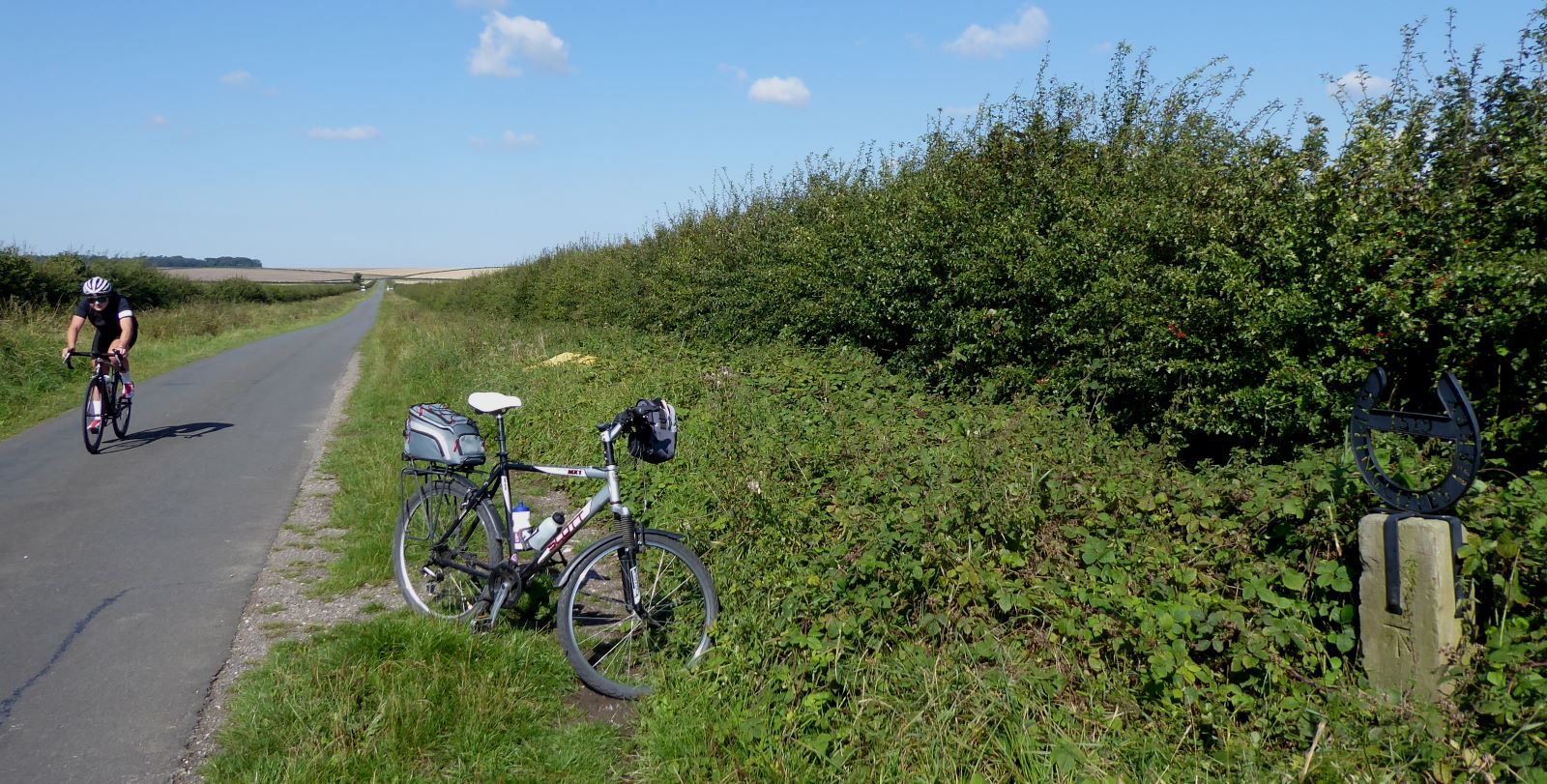 …and hurtle north-west on the grass verge alongside a road so straight it looks Roman, but isn’t (pic). 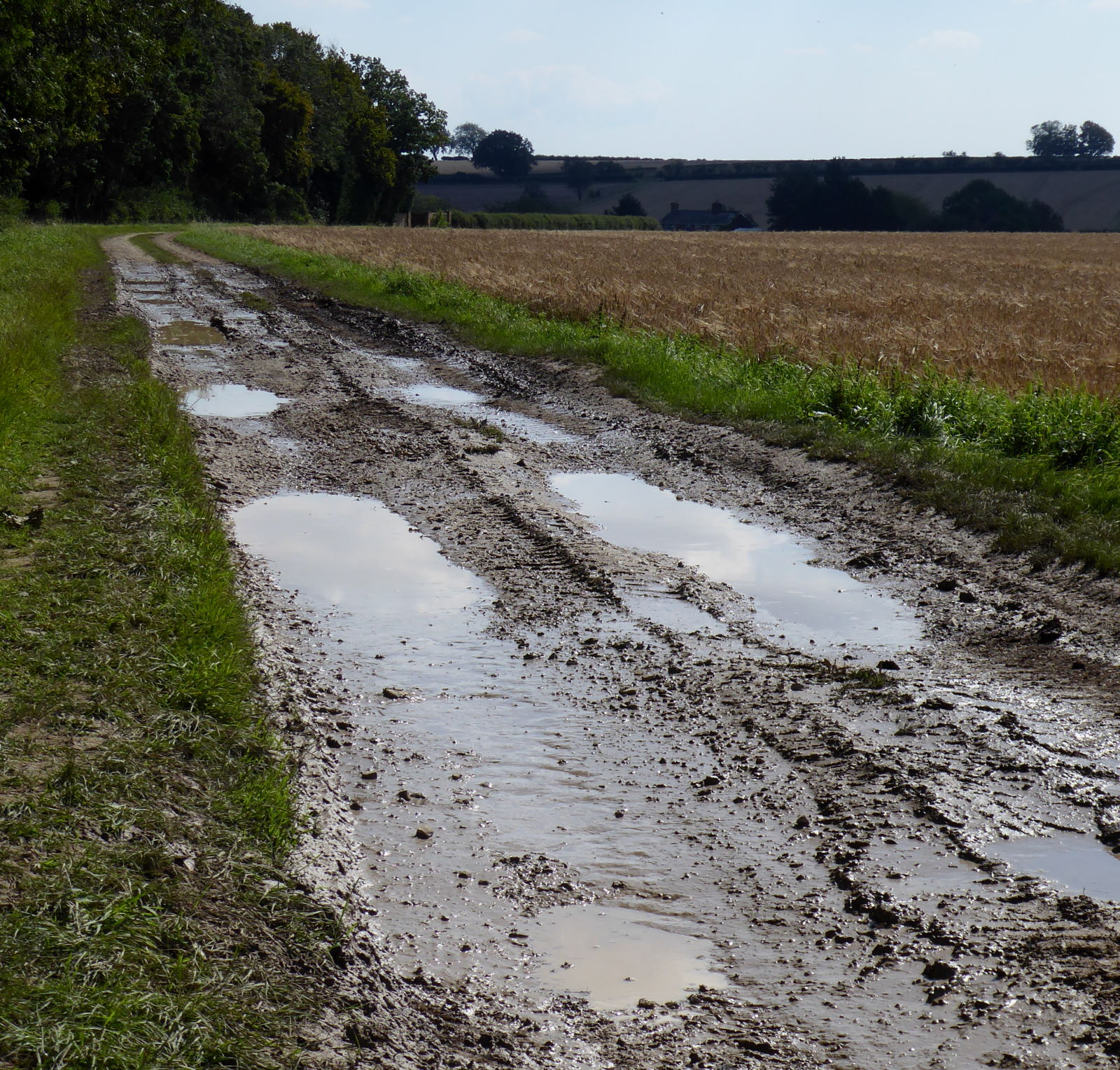 As they near the finish, those hardy jockeys and steeds have to contend with a muddy country farmtrack (pic).

This was how it looked on a sunny late-summer day; they do it in late March after a winter’s worth of drizzle. 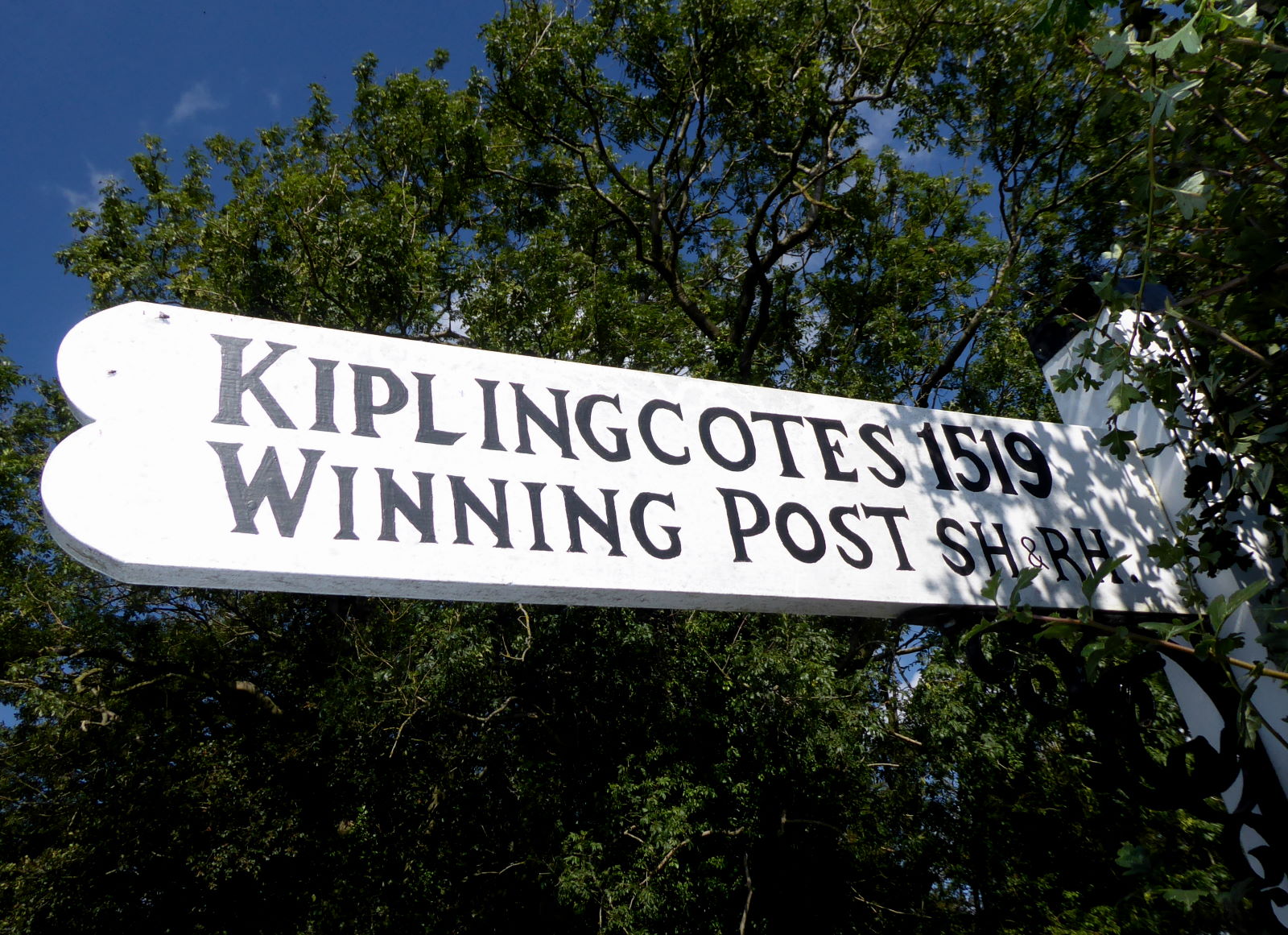 The finish line is as modest as the start (pic). By one of those British quirks, the second-placed rider often takes away more prize money than the winner.

Legend states that if the race is not run, it can never be again. So it always is run, though in difficult years (1947, snowdrifts; 2001, Foot and Mouth; 2018, waterlogged course; 2020, global pandemic) it isn’t contested – a local rider will complete the course, walking the horse if necessary, to prevent the race, and therefore the world, ending. 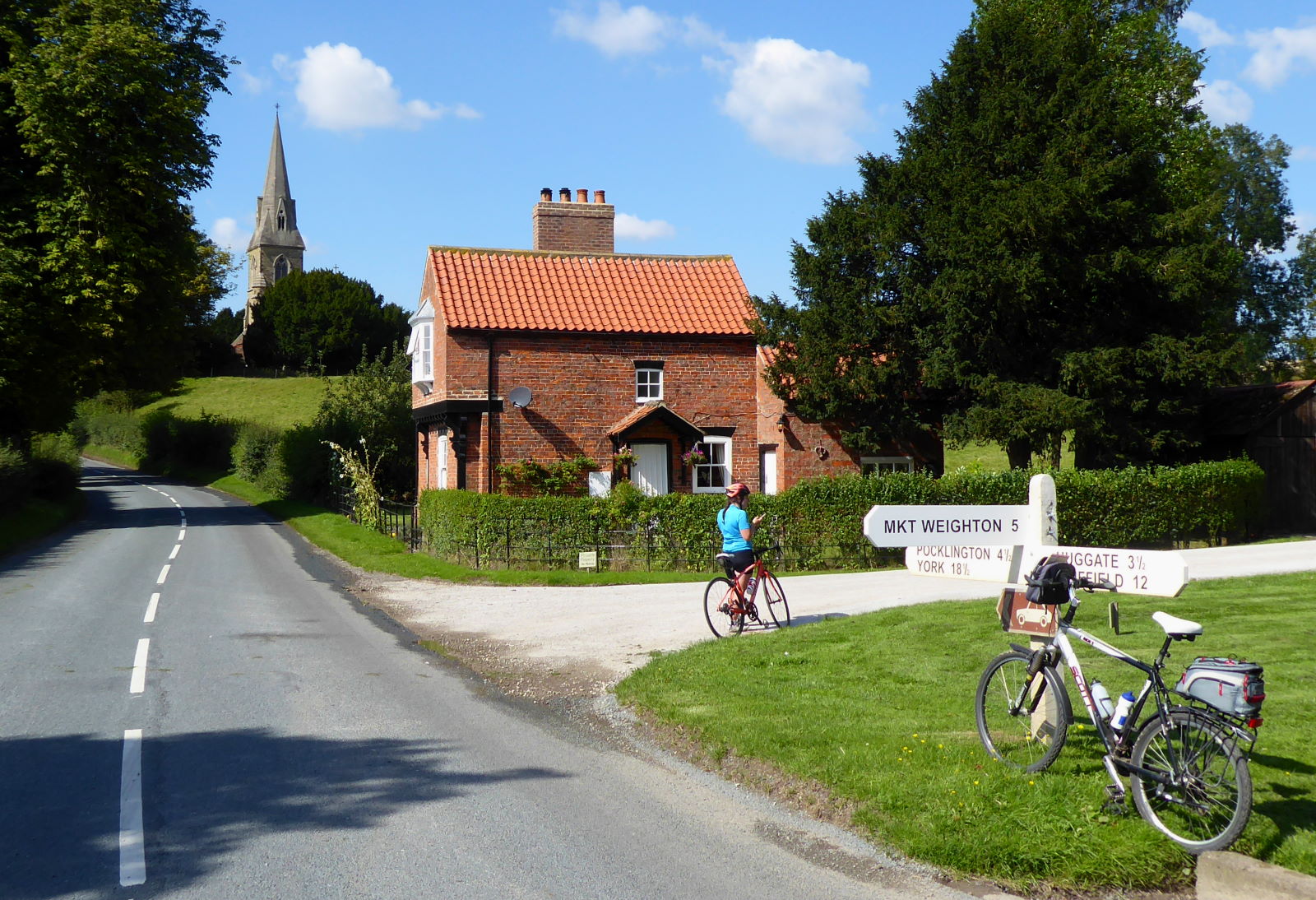 I carried on, too, to Pocklington, and my bus back to York. Along delightful hill-hopping lanes to the village of Warter (pic), which had some temporary ponds, one of them presumably called Warter Water. 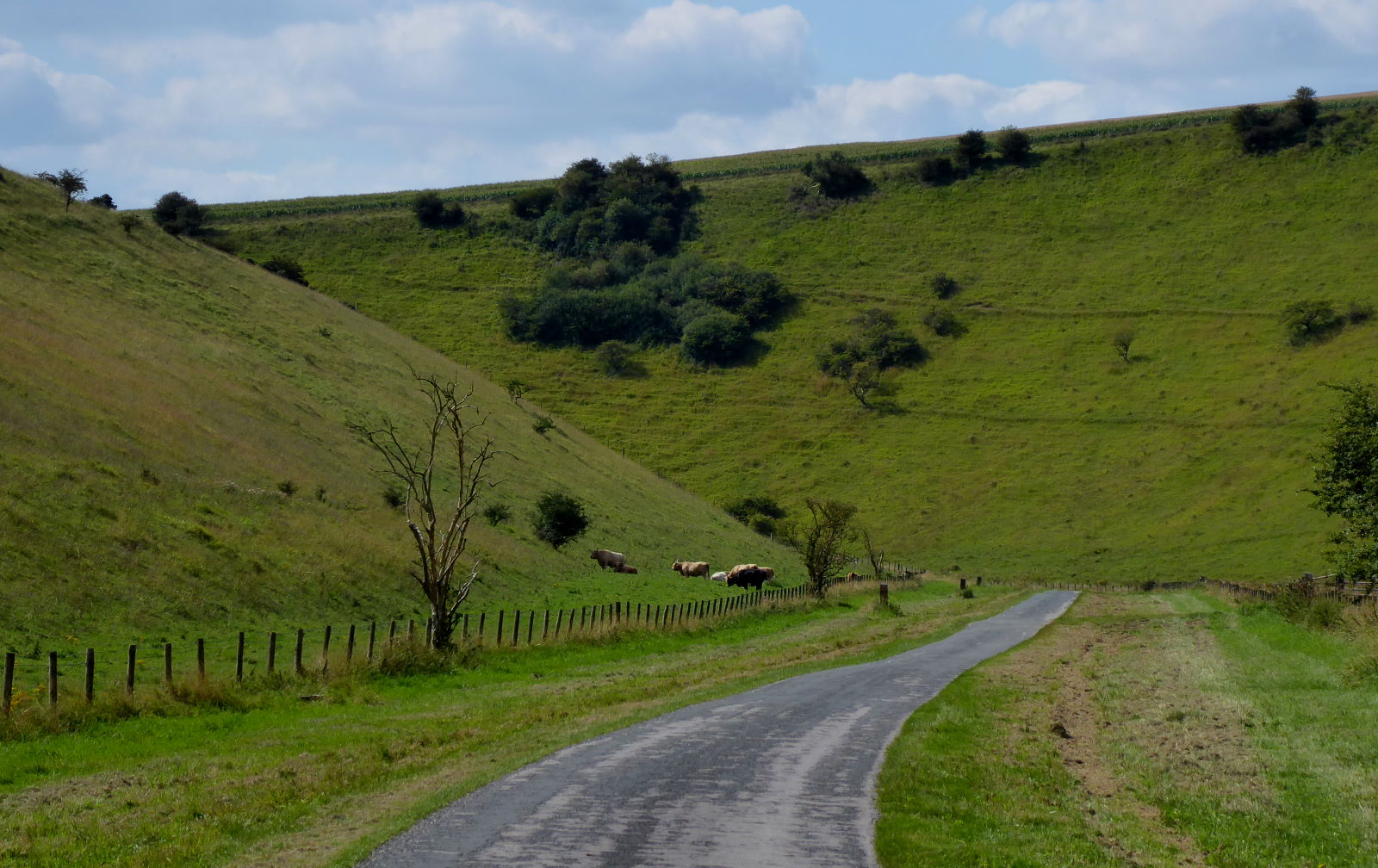 And then, along a (genuine) Roman Road to the fabulous little road down past Millington Wood (pic), one of the Wolds’ most delightful lanes. This – along with Water Lane down to Thixendale, a few miles north – is one of the area’s showcase rides, freewheeling gently down that characteristic Wolds phenomenon, the Dry Valley. 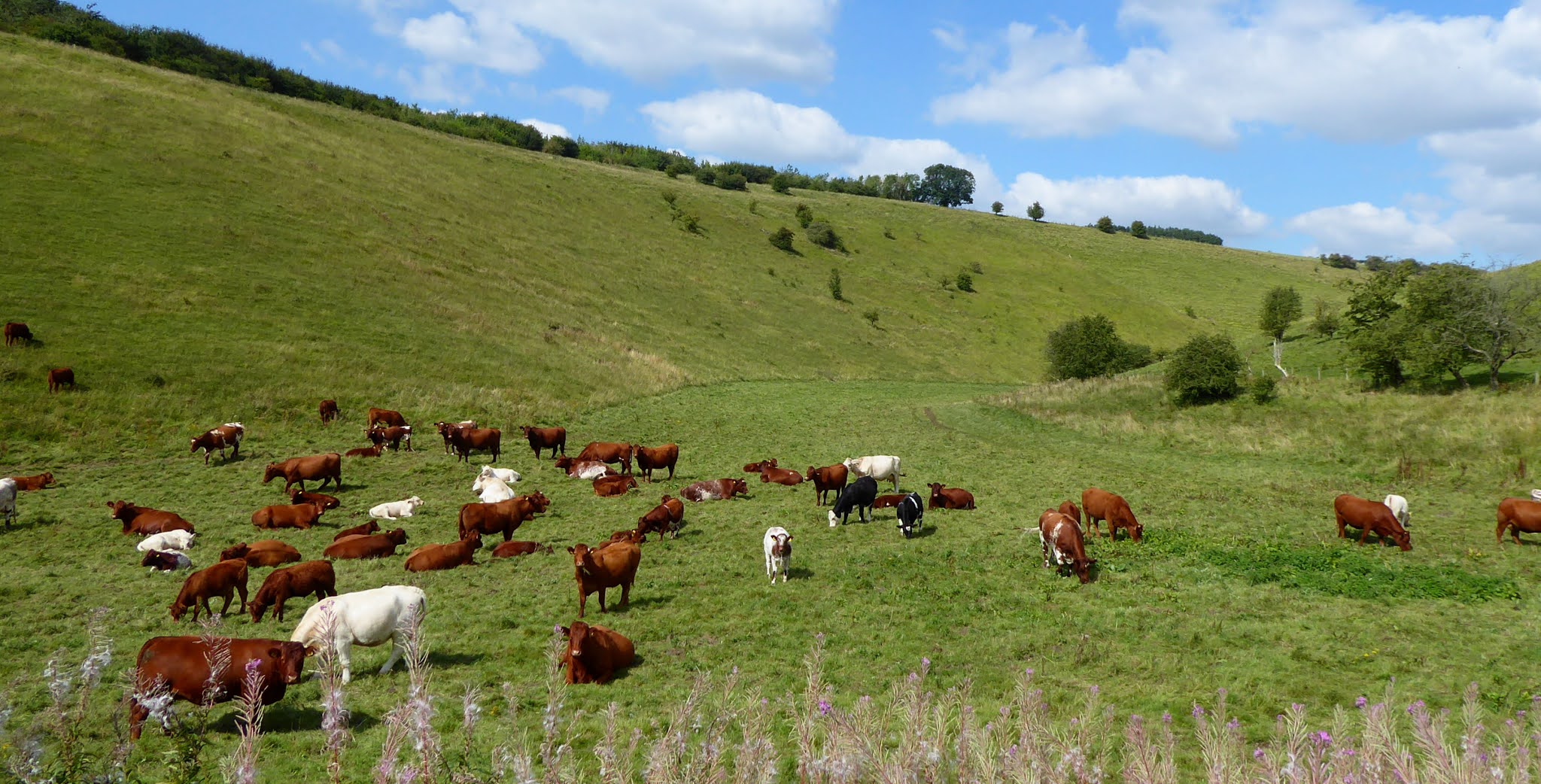 It’s all chalk round here, so rivers never get going: rainwater percolates down into the rocks before it can form streams. The valleys were carved out not by water, but by ice, thanks to ancient glaciers. So you have these double-take gorges that, given the absence of any water, intuition wrongly tells you must be old railway cuttings (pic).

So the trip was dry in every sense. No pubs were open this afternoon, so I had to wait till I got back to York for refreshment.

Though, given what might have happened on the way home on a toilet-free bus between Pocklington and York after a pint of IPA, perhaps that was just as well…