The focus for important celebrations, such as New Year or winning the war or England regaining the Ashes in 2005, and home to the superb National Gallery, Trafalgar Square‘s lovely fountains, worthy statuary, and ambling piazza space are not cycling-friendly. 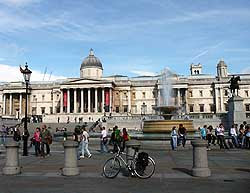 There’s no cycling in the square itself (right, though you’ll see people scooting across the top bit in front of the National Gallery, below right). There’s also no parking (you’ll get jumped on by security personnel if you try). And the three sides of the square that have roads are unpleasantly busy with impatient, lane-jumping buses and taxis. Still, it’s much more pleasant than it was before the top bit – the road that used to cut the NG off from the square itself – was pedestrianised in 2003. 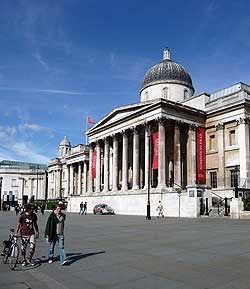 The nearest cycle parking is round the top-right hand corner opposite the entrance to the National Portrait Gallery, with more dribs and drabs of stands tucked in some of the radial roads from the Square. Unless, of course, you inveigle yourself into a slot on Antony Gormley’s rather dull Fourth Plinth project with your bike, though like the rest of the Square, there’s nothing to lock it to on the vacant platform.

Trafalgar Square serves a very useful purpose for anyone more familiar with imperial than metric: it is almost exactly a hectare, being just about 100m x 100m. Visualising an acre is even easier, though: just think of the front garden of the house I used to live in outside Hull, except for the patio bit, and quadruple it.

The wonderful (and free) National Gallery is very visitable by bike – there’s parking up the left-hand sidestreet, though we know of thefts from there – and it reminds us that the French Fauvist painter Maurice Vlaminck (1876-1958) was also an avid racing cyclist. Hah! Eh bien, Monsieur Monet, zose lillies are vairy naice, but now we see ‘ow you manage on Tourmalet or Mont Ventoux, eh?

Monopoly’s Trafalgar Square costs £240. What could this buy you there? You could decorate an entire house stylishly with a dozen or so posters of famous paintings bought from the National Gallery shop. For instance, your shower rooms with lines of amphetamines for your media friends could have Turner’s Rain, Steam and Speed. You could have Renoir’s Umbrellas in the cloakroom, Velazquez’s Toilet of Venus in the downstairs bog, and use the Leonardo Cartoon as a caption competition.