Hidden away corncrake-like in City back streets, crankingly audible but not visible, Fenchurch Street Station is the most obscure of London’s mainline terminuses, and not even connected to the London Underground system. It also has surely the smallest concourse: my mum has made bigger sandwiches. 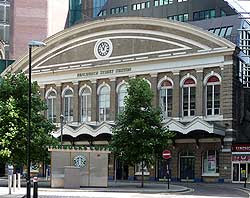 In fact, for many of us it’s a surprise to find it actually exists. I’d never heard anyone mention it, and subsconsciously assumed it was destroyed in the war, or was the spurious result of some misread sign when Vic and Marge scouted London for locations to convert the US board to an English version in the 1930s.

From here, C2C (which I’d always thought was a coast-to-coast bike route) run services to East London and Essexy places such as Grays, Tilbury and Shoeburyness, like a rail network designed by aliens whose sole knowledge of earth came from Ian Dury albums. 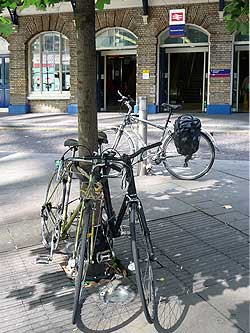 They allow bikes on all non-rush hour services, which is good, but request that folding bikes be enclosed in a container or case, which raises the question of how you transport the container or case. You’ll probably need a standard upright bike to do that. In which case you don’t need the case.

There’s no bike parking immediately outside the station, but there are some racks opposite the station in nearby Mark Lane.

Monopoly’s Fenchurch St Station costs £200. What could this buy you there? You could get (by chucking in an extra tenner) a monthly season ticket between here and Basildon or East Tilbury, if you lived in this part of Essex. This is only a possibility, not a recommendation.