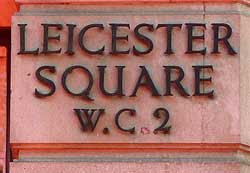 There’s no cycling in all-pedestrian Leicester Square, which doesn’t allow vehicles. Probably just as well: it would be dangerous dodging the delivery lorries that ply the traffic-free piazza.

Steadily humming by day, the partying Square comes into its own by night. If you pass by it on Charing Cross Road in the small hours, for example, you’ll see a noisy throng of bleary-eyed young foreign students blundering around, who have no idea where on earth they are: they’re the people driving the bicycle rickshaws which give disgorged clubbers a novelty ride round central London. It would take quite a lot of recreational drugs to get me in the back of one of those things too. 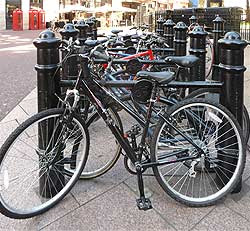 No cycling there may be, but Leicester Square has some of the chunkiest cycle parking in London, more like village-green municipal fencing on steroids than normal racks (right).

You might be using these if you’re buying cheap theatre tickets from the kiosk here, or if you’re visiting the Square’s Wetherspoon’s pub Moon Under Water. It’s named after George Orwell’s 1946 essay listing the ten necessary ingredients of the ‘perfect English pub’. These included the provision of mussels and liver-sausage sandwiches and absence of radio and piano, but unaccountably missed out proximity of cycle parking, and doesn’t say anything about free provision of wi-fi. 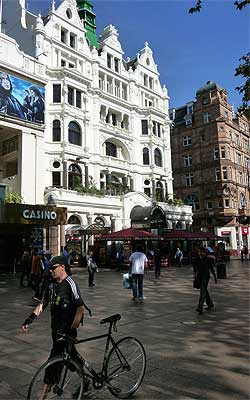 Leicester Square to Covent Garden is said to be one of the most popular tube trips by tourists, even though the distance between them is the shortest between any two Underground stations: 260m. You can walk it, and certainly cycle it, much quicker. The standard non-Oyster tube fare of £4 evidently works out more expensive per mile than the Orient Express.

Monopoly’s Leicester Square costs £260. What could this buy you there? Probably one evening’s clubbing entertainment for two, finishing with a cycle rickshaw ride to an exciting part of London you’ve never seen before. Trouble was you asked to be taken to Charing Cross tube.