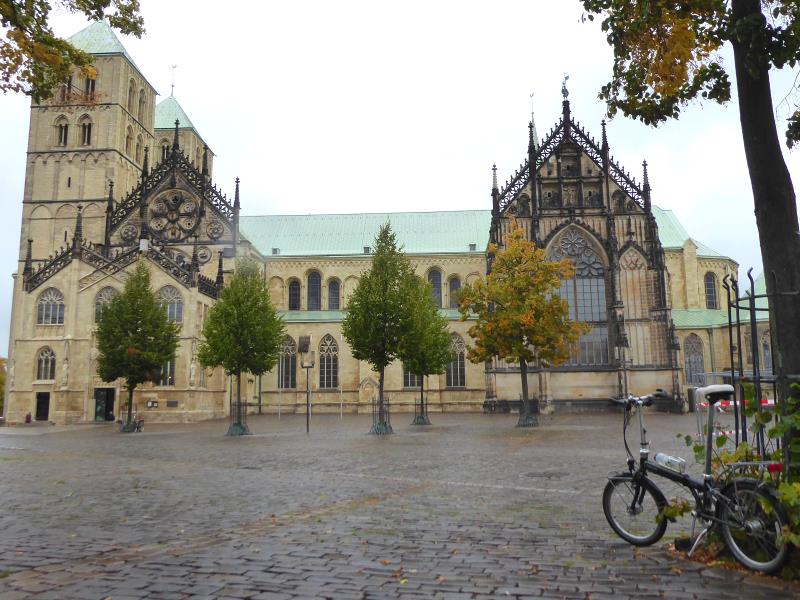 Münster, twinned with York. Certainly, both claim to be super-cycle-friendly cities, albeit debatably. But York doesn’t compare especially well.

We didn’t have too much time to explore, given a tight schedule and terrible weather. At least the relentless drizzle was a little bit of York in western Germany. But we did get out in the morning to ride the Promenade, a circular city-centre cycling and walking path that follows the old city walls. It’s a pleasant leisure and perhaps even utility ring-route, rather better than York’s Orbital (being car-free virtually all the way round, though often having to give way to traffic at junctions).

We also did a lap of the lake, called entertainingly Aa, whose quiet untrafficked waterside paths were full of joggers, dog-walkers and cyclists. The bridge at the far end gave a fine view of Münster’s cathedral, which like York’s Minster dominates the skyline. If you stand in the right place, anyway.

Münster is very proud of its status as a cycling city, and our hotel’s website was delightfully positive about all this. We didn’t get to see much evidence of that, though: the historic centre’s cobbled streets were bike-hostile, though unlike York, at least you can cycle the pedestrian shopping streets.

Perhaps if you commute in by bike from this large city’s sprawling suburbs you have a more accommodating passage in to the middle along the cycle-path system trumpeted in the tourist lit. Certainly the enormous bike parking at the train station suggested a thriving utility-bike culture.

And our Sunday morning cafe boasted plenty of proud cycling-rels ated decorations, including a bike itself. Also in the décor was a poster celebrating the local dialect word for ‘bike’, ‘(die) Leeze’. A definite plus for cycling etymologists.

As for that hotel, well, we can report that it was also very, very yellow, and had a hall of mirrors which made it appear there were a lot more cyclists than there actually were. Maybe a lesson there.