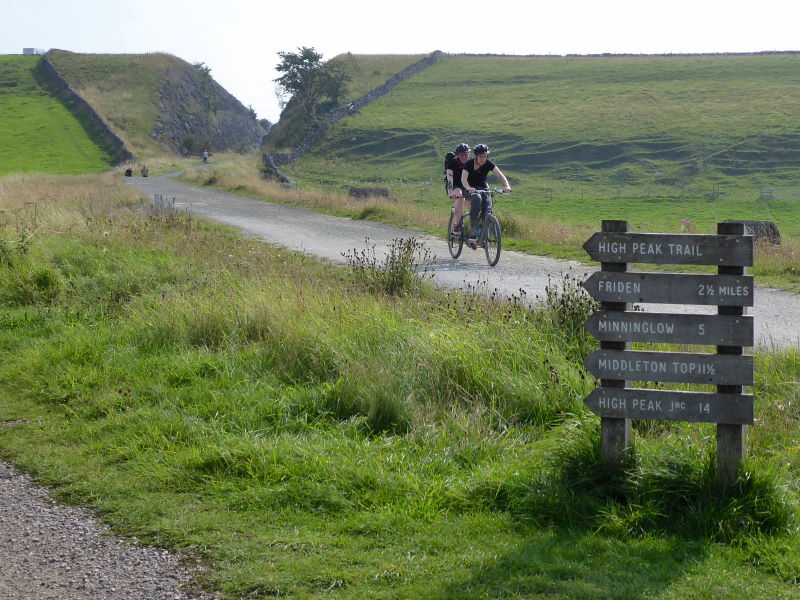 Just £2 for the train, £7/night for the campsite: the trip was cheap, but priceless. Thanks to Northern Railway’s Flash Sale – so called because it lasts a thousandth of a second but brightens up my entire day – I got from York to Sheffield for a quid, and thence to Alfreton for another quid. An hour’s ride got me to my great little farm campsite in Whatstandwell, four miles south of Matlock, the centre of the rides I was to explore in the next few days.

Today was my gravel route. The Derbyshire Peak has four of Britain’s best railtrails – Monsal, Manifold, Tissington and High Peak – and this afternoon I did the last two plus the path round Carsington Water. In the volatile geography of the peaks, they all offer that unusual combination of scenery with flatness.

The High Peak Trail rises from Cromford, the 1700s cradle of the industrial revolution that changed the world starting at Richard Arkwright’s factories, so he’s the man to blame for everything going wrong since. The path up from the A6 is more of a staircase, and it seems indecently steep for something that once had rails.

But at Middleton Top you’re on a plateau, and from there, the rest of this 25-ish miles of good, light, even, car-free gravel is flat or gently downhill into Ashbourne.

There was a mildly tedious series of gates on the HPT as I got towards Parsley Hay, the middle-of-nowhere junction with the Tissington Trail. I hope Sustrans never get in charge of admission to anything celestial. You’d have no chance of opening the Pearly Gates while also trying to push a touring bike.

The HPT continues north from the junction as the Pennine Bridleway, but I turned sharp left to follow the Tissington south, along the former Buxton to Ashbourne railway. It starts dramatically, with a deep cutting that no doubt involved plenty of gunpowder to carve it out; well, it’s a blast to ride today, too.

There’s commanding views all along the TT, right to Dovedale and left to, er, some other dales. The trail was busy on this sunny afternoon with leisure riders of all descriptions – e-bikes, town bikes, road clubs, recumbents, trikes, kids on balance bikes, cheapskate cycling writers on dusty old tourers – so you couldn’t take your eyes off the trail for too long.

It’s all rather blissful riding, and the gentle, just perceptible descent the last few miles into Ashbourne makes it feel like you’re on an e-bike. I don’t have an e-bike. Goodness knows how much it would end up weighing, given the amount of luggage I generally cart around.

The tunnel into the centre of Ashbourne promised a sonic artwork, with sounds triggered by sensors as you cycle through the spooky darkness; I experienced it two decades ago but it wasn’t working today. Unless it’s actually broadcasting subliminal messages urging you to spend money in the town, in which case it didn’t work.

I got a puncture on the outskirts of town; not too much of a problem, as it was an easy front-wheel job and it was sunny, dry and windless, but it did delay me after my already late start.

The reservoir of Carsington Water has a well-specced gravel path right round it, similar in quality to the aforementioned Trails’, and I rode one side of that in the balmy late-summer evening.

A mossy, shrouded lane up through woods got me back to the High Peak Trail, taking me crunchily downhill back to the Derwent valley and the campsite as dusk fell.

A good start to the trip. I should do this for a living.