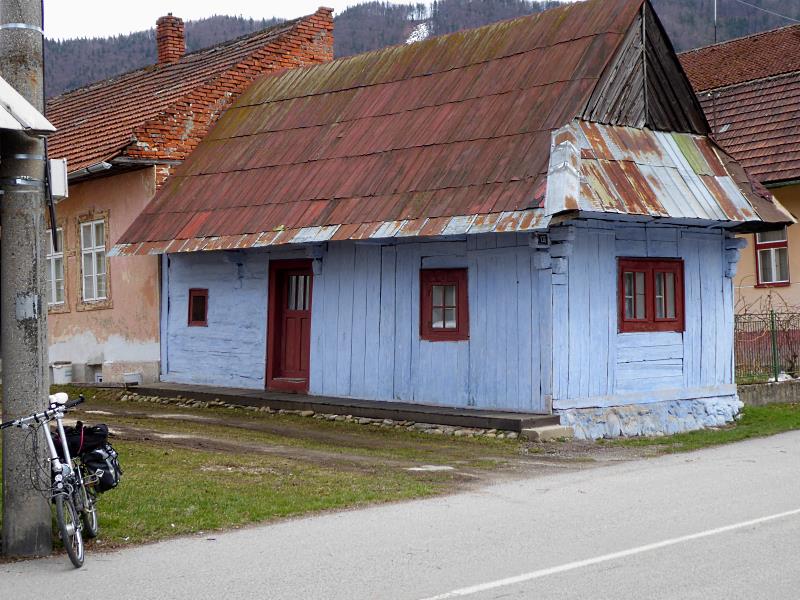 After all those browns and greys of my old Soviet hotel, the cobalt blue sky of the morning came as a relief. I wondered why the back road, suggested as a quiet way out of town by my phone’s basic mapping app, was so busy.

The answer soon appeared, a stark grey building in the distance like a Star Trek plastic model of a hi-tech exoplanetary society’s walled city. It was the Kia car plant, one of Slovakia’s big four car factories (VW in Bratislava, Peugeot/ Citroën in Trnava, and Jaguar/ Land Rover in Nitra are the others). A reminder that the clean and green country produces more cars per head than any other in the world. Heads that are probably gasping for breath with all the particulates.

The factory had a bike path along its perimeter, looking suspiciously like those obligatory Section 106 facilities that Britain’s developers often have to put in. Because it was new, shiny, smooth, and not connected to anything useful.

Once past that, the road was fairly quiet, and I was at last into rural Slovakia, the quiet country of villages, chalets, churches and mountains.

They’re building a separate cycle path from Žilina to Terchova and beyond, though only a few bits are finished so far. There are some enticing wooden bridges already installed, most of them not yet accessible though. So I was on the road almost all the way.

I was heading for Terchova, home of Slovakia’s equivalent of Robin Hood. Juraj Jánošík (1688–1713) was a highwayman who, legend has it, robbed from the rich to give to the poor, the opposite to today’s Tory government. He met a sticky end, being hung for his crimes – and yes, I mean hung, not hanged, it was all pretty grisly.

However, Jánošík’s ideas of redistribution of wealth fitted in pretty well with the Communists, and in 1988 – a year before the system all collapsed – the regime installed a huge, stern, and frankly rather ugly, statue of the antihero on a hill at the edge of town.

Back down in town there’s a tacky souvenir emporium, and several of the village shops celebrate the folk robber with his more traditional, jaunty appearance of bathtub-sized hat and Greta Thunberg plaits.

In a bus shelter in the village I was pleased to see the score for a local anthem celebrating the place. What a shame I didn’t have these bus shelters yesterday, when I was sitting out rain showers. I’d have had some way to entertain myself.

After a stiff climb up the hill out of town I had my first mountain pass, with splendid views down over the other side. From here it was about 20km or more of downhill through steep-sided valleys following rivers through occasional picturesque little villages.

I lunched in Párnica, which was occasional rather than picturesque, on a supermarket sandwich, bag of crisps and energy drink in a bus stop (sadly one unadorned by a musical score). Quirky sights, lovely mountain scenery, back roads, refreshment stops in bus shelters by a Co-op: yes, I was at last back in the cycle touring groove today, and it felt blooming great.

More gradual riverside valley downhill took me back to the Vah valley, and the main road heading east which I’ll parallel for a few days now. It’s a horrible big busy main road, the E50, but with a decent shoulder that functions as an effective cycle lane. I didn’t feel unsafe, it was just noisy.

However, for a few stretches I could take an alternative quiet lane on the other side, through litle cottagey villages, thanks to a pedestrian suspension bridge or two. This was delightful stuff.

I got into Ružomberok, which felt a rather workaday town without much in the way of a historical core. However, in front of the town hall, a very modestly signed little bistro turned out to be a classy gem inside, like someone’s light, sociable, well-to-do lounge that happens to have three types of Czech-made Bakalar beer on tap. I took the figure as an invitation. Today was working out very nicely.

My guesthouse was in a quiet village outside town. After checking in I strolled to the bar virtually opposite for a pizza and beer. It was a real local boozer, a slightly dingy, tiny-windowed L-shaped room with Manchester United posters up. Maybe half a dozen scruffy middle-aged blokes sat around arguing in varying degrees of incomprehensibility, superintended by a smiling, long-suffering landlady. Her smile to me when I ordered had a hint of conspiracy about it, like she recognised I was actually the least incomprehensible scruffy middle-aged bloke there.

All in all, then, a very good day.