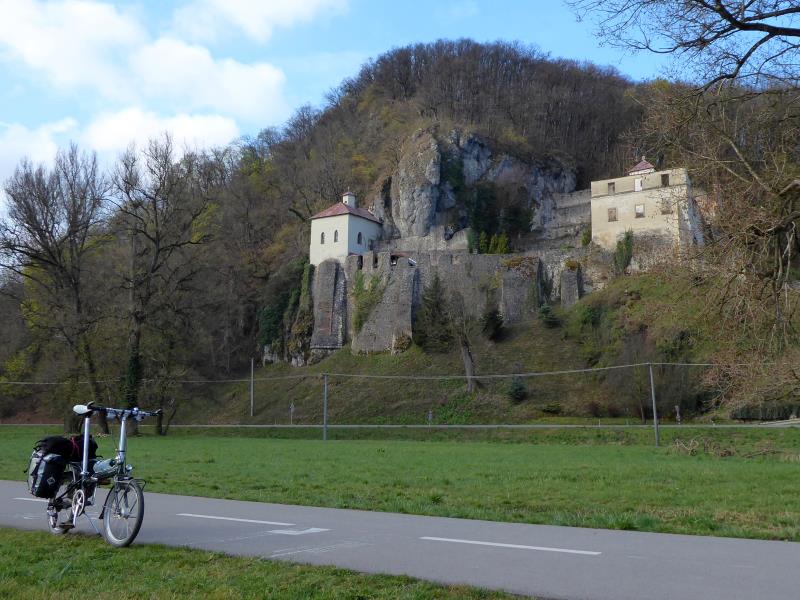 Is there a guidebook to Slovakian bus shelters? If not, I could write one – I seemed to spend much of my time today inside them, dodging sudden flurries of rain, sleet or snow. It was a long and sometimes humdrum day with a fair bit of tedious road riding along ‘Cycle Route 002’, which is very consistently signposted, I must say: there’s never anything at all.

But the morning was good. I slipped out of my rural guesthouse and back into town along the riverside, quiet and cold, just me and the odd jogger or dog walker. I crossed the old railway bridge and left Trenčín, gradually leaving the castle behind, as I continued along the excellent bike path out of town.

Still flat, smooth and car-free, the cycle path headed east through parkland, at one point past a dramatic bluff. I’ve tried a few dramatic bluffs in my time. They’ve never come off.

Eventually, round the town of Ľuborča, the cycle path turned into roads, and signage became a thing of the past. From here for the rest of the day I had to keep stopping to check my on-phone maps to make sure I wasn’t unwittingly heading back to Bratislava or something.

At Puchova I stopped for Sunday brunch in a pleasant Sunday-brunchy sort of place, where people leaf through the papers while listening to cool jazz. It was an ‘English breakfast’. Hmm: sausage (a garlicky, delicious Eastern European one) two eggs on toast (a rich dark European bread) some veg (carrot and cucumber batons, very tasty, locally produced I guess, not supermarket-fridge-bottom flavour) and salad (ditto, with sweet fruity tomatoes) and a ramekin of baked beans (the only recognisably English constituent). All this and a coffee. Nice.

I felt set up for the rest of the day, and I needed it, as it turned out. A bit more paved segregated cycle path ran out from Púchova, but soon stopped to turn me over to the main road. Fortunately it was Sunday traffic, and so no lorries. I admired some impressive viaducts and the lakelike breadth of the river, and cycled on and on.

A rainstorm. I stopped in a remote bus shelter. It stopped. I continued.

A hailstorm. I stopped in another remote bus shelter. It stopped. I continued.

There wasn’t much to see apart from the old palace in the village of Bytča.

A snowstorm. I stopped in another remote bus shelter. It stopped. I continued.

At last I struggled into Žilina, which seemed a little underwhelming. It’s hard to be impressed by a ‘historic’ city when you come in through its scruffy light-industrial suburbs, past tyre depots and timber yards and factory car parks. The historic core – despite the large friendly sign saying ZILINA made of hedge in one big square – seemed unimpressive too, with few people sitting out in the dripping pavement cafe seats.

I checked into my hotel, a splendidly brutal old block of Soviet concrete. It was lightly shabby 1970s plywood and plastic chic. Everything was either missing or patched with tape, and smelt faintly of cigarette smoke. And every colour was brown or grey. I rather liked it. The lass on reception was sweet and anglophile, and loved beautiful Yorkshire because it was the home of Jane Austen. (Yes, I know. I didn’t have the heart to disappoint her.)

I ambled to a nearby restaurant, had a superb burger and fries and pils or two, and slept the sleep of the just. As in ‘just had three beers’.