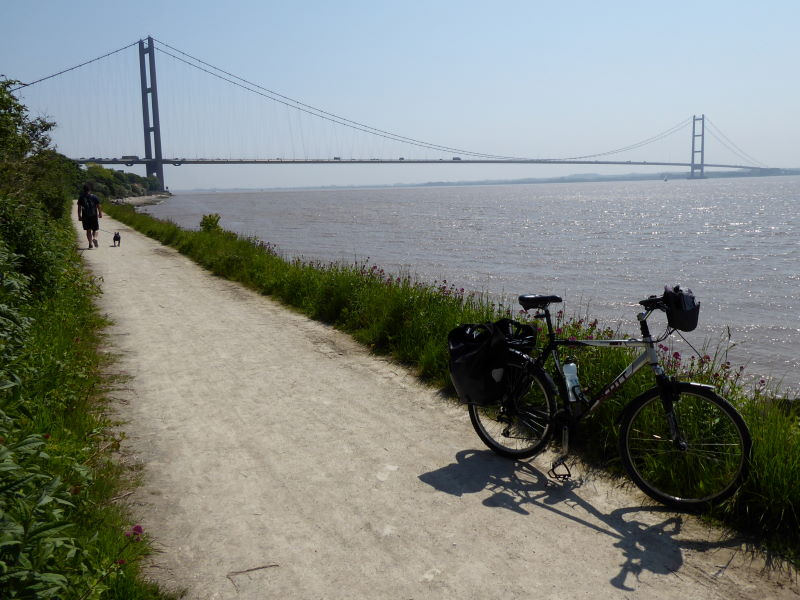 Another Yorkshire End to End, this time between two remarkable bridges. Humber to Tees; Suspension to Transporter. South to north; Wolds to Moors.

The Humber Bridge, opened in 1981, links Hull – 2017 City of Culture, and home to 300,000 down-to-earth souls – with some fields on the other side. The result of a 1960s by-election pledge, it was the longest bridge in the world for its early years: a 1410m main span (which is what counts – anyone can build a viaduct), gracefully vaulting the muddy estuary waters.

It’s since been overtaken by half-a-dozen longer structures (Akashi-Kaikyo in Japan, Great Belt in Denmark, Runyang and others in China) but thanks to its bike-ped paths on either side, it’s the second-longest bridge you can cycle over in the world.

The longest is the Yangsigang Yangtze Bridge in Wuhan, China, which has cycle lanes and boasts a longer main span (1700m). But all the other bridges longer than the Humber are motor-only, with no walking or cycle paths. Hah! A bridge isn’t a bridge in my book if it doesn’t take bikes. (The book’s out of print, though.)

That global-leading status was in jeopardy in April this year, however, when the bridge’s cycle and footways were closed without notice for ‘security concerns’. Thankfully access was restored a month later between 5am and 9pm every day. So it’s still one of the world’s most extraordinary bike rides, and all free, which is roughly my sort of budget.

My End to End started, I suppose, half-way across, where the Lincs-Yorks border swirls around somewhere in the Humber’s treacherous currents. It was a lovely sunny summer morning, with plenty of walkers and cyclists taking advantage of the restored access, and a few hard-hatted Bridge employees keeping a discreet eye on security, and giving me a chance to practise my Polish.

There’s a delightful path from the Bridge to (North) Ferriby, a decent chalky track with the Humber’s waters lapping by one side and trains passing excitingly close on the other.

Ferriby welcomes you with a little park – in my day it was waste land – that features a model of Stonehenge-era boats found here, which I’ve blogged about before.

I grew up here, in Ferriby, three miles or so west of the Bridge. We watched the thing being built – slowly and with expensive delays, as the south tower kept sinking into the mud.

Not a lot happened in 1970s village life just outside Hull, so it was about the most interesting entertainment we had.

I was curious to see that the phone box in the village – white, of course, the traditional telephonic livery of Hull’s once-independent phone network – is still a phone box with a phone, and not a miniature library or defibrillator or art gallery or whatever else they get repurposed as these days.

Today though was a Wolds Day. This area of quiet lanes threading through and over gentle, chalky, lush, sheepy hills is an underrated gem for cycling, and I crossed it all.

The Wolds start at the pretty village of Welton, which has three claims to fame: Britain’s first accidental shooting fatality (1519); the arrest of highwayman Dick Turpin, according to legend at the Green Dragon pub (1739); and the day I fell into the pond and had to be rescued (1965). (Only two of those are listed on Wikipedia.)

There was little traffic. In increasing order of magnitude, I was sharing the tranquil back roads today with tractors; horse riders; lumbering agricultural behemoths that could have transported a Saturn V rocket; cars; cyclists; and pheasants.

After the splendid descent into South Newbald, with huge views and mighty skies, I passed through North Newbald, with its intriguing pairing of Tiger Inn and Gnu Inn on the green, and took Sustrans’s Wolds Cycle Route, NCN164.

It’s great when you have a well-surfaced, smooth, scenic route, reliable in all weathers. Instead, we have NCN164. Scenic yes, so make that one out of four. The bridleway stretch at Hessleskew was OK with my offroad tourer on this beautifully clear day, with the wind turbines swishing gently away. But on a hybrid in February drizzle, I suspect I’d be more interested in tigers and gnus instead.

Ah, but the scenery, the rolling hills, the austere tranquillity of the landscape. I love it. And I enjoy my own company, particularly as I don’t keep interrupting me, or droning on to me for two hours about how awful things are at work. Specially as I don’t have any work.

I rode the Kiplingcotes ‘Racecourse’, which I’ve also blogged about before. The surface is OK, even with my fairly heavily-laden trekker: two panniers, each holding a good 12kg–15kg. This is what happens when I let mum make me a packed lunch.

The land unfolded, the climbs were easy, the downhills delightful. A cheery cycling club outing passed me, but I caught them up later on, as they fixed some punctures by the water in the village of Warter. Hare and tortoise, laughed one of them.

I don’t mind being called a tortoise. They may be wrinkly and plodding but they are robust, get plenty of sleep, eat when they feel like it, don’t fret about stuff, and live to be 164.

Anyway, my detour through Huggate rewarded me with a scarecrow-festival-like installation at a house on the cul-de-sac (for cars, though not bikes) through the village.

It was themed on the Wizard of Oz, and my equivalent of the yellow brick road was a bridleway past a farm and back on to the road north.

The village of Thixendale is nestled so snugly in the dry valleys that it couldn’t get any TV signals until the 1990s. The descent into it, or climb out of it, is spectacular, whichever direction you take.

After another banana-based snack by the village hall (once a youth hostel) I carried on by one of my favourite roads in all of Yorkshire, northwest through Water Dale. The compact scale of the landscape makes the hillsides seem enormous, and it comes as a surprise that the serpentine little lane can make its way around them at all.

After a super glide downhill through Birdsall, with its grand manor house, the road was generally downhill to Malton, my target for the day. I’ve been here many times (and blogged about it, obvs) so I didn’t need to confirm its reputation as a food town; I headed straight for the station for my train home.

Besides, I hardly needed feeding: I still had enough left of mum’s packed lunch to feed a peloton.

e2e.bike > Yorkshire Ridings > Yorks A to Z > Yorks B to B 1: Humber Bridge to Malton