I’ve lived in York since 2011, so it’s about time I blogged about it. It’s a tourist Mecca of course, with a large and important religious building – the Minster – like Mecca. Though unlike Mecca, it has 365 pubs. (Actually the figure is more like 200, but it’s nice to think that a year’s entertainment could be so easily scheduled.)

Not to mention the quaint cobbled centre, the Shambles, the museums, the parks, the magnificent free National Rail Museum, or the medieval city walls dating back to Victorian times. So I won’t. Instead today I’m looking at York’s other tourist attraction: the Ouse, whose amiable city centre riverside provides walks, cycle paths, postcard views and a million selfies. 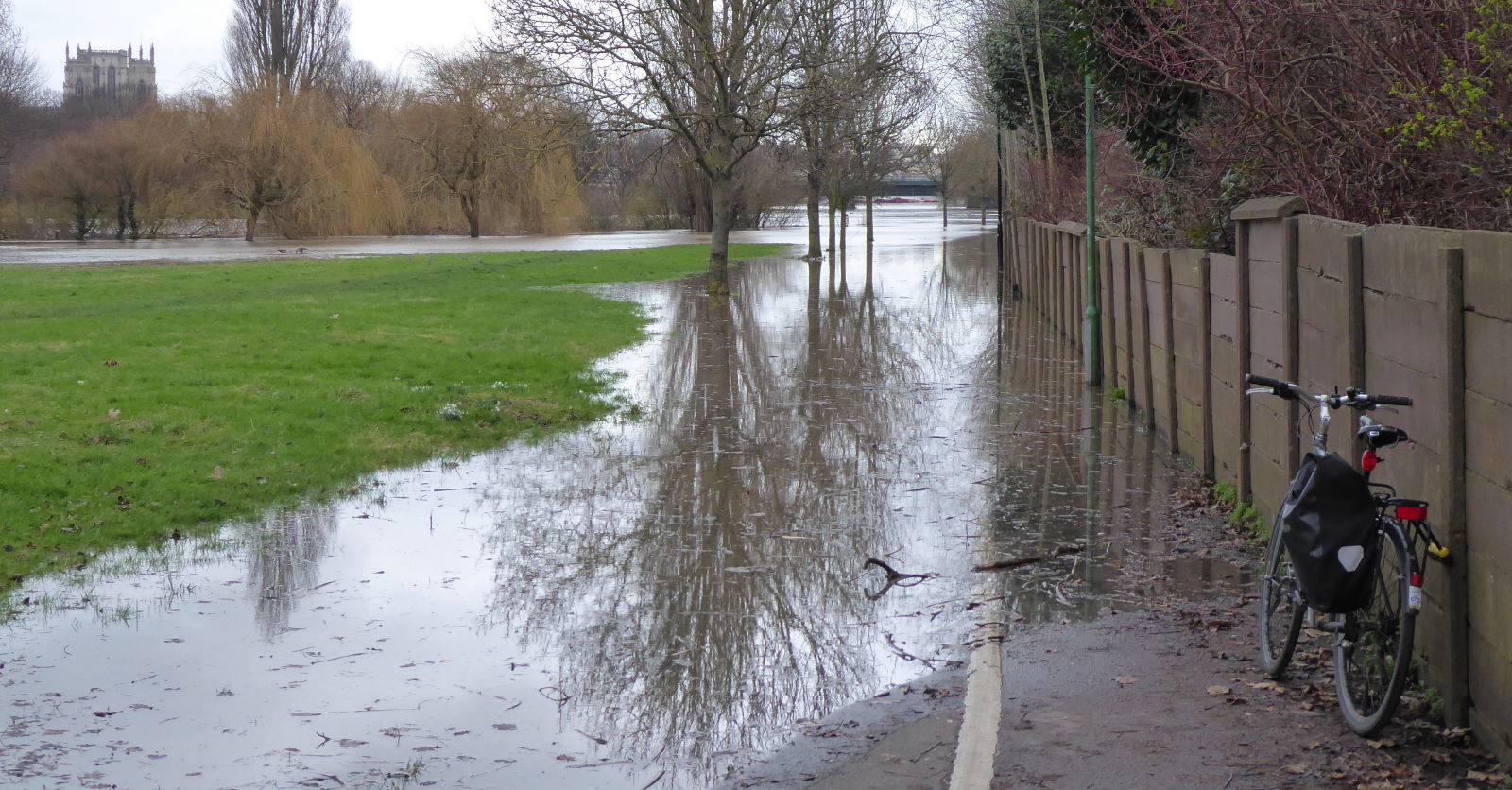 Unfortunately you can have too much of a good thing – Storm Ciara and Storm Dennis combined to produce flood levels this morning of 4.5m, figures not seen since 2015, though mercifully short of the disastrous 5.4m during the floods of 2000. Which meant the river was twice as wide as usual through much of the centre, cutting off paths and inundating parks (pic).

The business of the river’s name can be as cloudy as the water itself. Hydrologically, York’s on the River Ure, but for some reason unknown even to clever people, the Ure changes its name to the Ouse about ten miles outside the city, where the trickle of Ouse Gill Beck joins it by stealth. (Downstream, it joins the Trent to become the Humber.)

Muddying the waters further, the upper Ure doesn’t flow through Uredale: it’s called Wensleydale, after a once significant town on its banks. And, more turbid still, the name ‘York’ comes from ‘Jorvik’, which looks like ‘Ure-vik’, especially as ‘Yoredale’ was the old name for Wensleydale; but we’re told, unconvincingly, that it comes from a corruption of ‘Eboracum’ via ‘Eoforwic’. OK: We’ll have to go with the flow.

Anyway, the upstream bit of the Ure/ Yore/ Ouse looked more like a lake district this morning (pic). Clearly no trundling up the riverside path to Beningborough today. 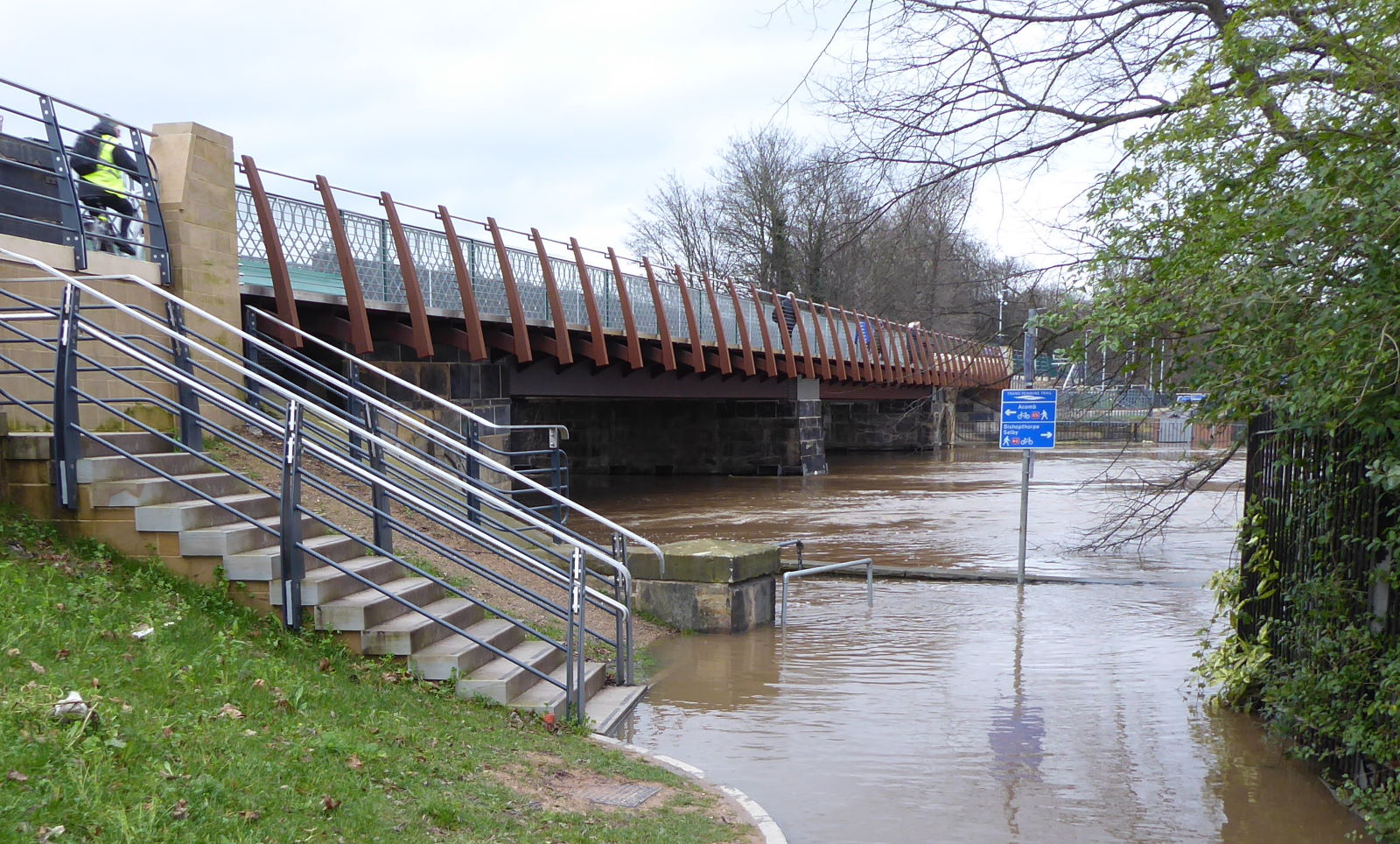 At least one good news story is Scarborough Bridge, a 2019 rebuild of the old iron bridge from the train station (pic). It used to be inaccessible during floods, but the new one provides a trenchfoot-free crossing of the river. So you can still get to the station, well in time to find your train has been cancelled because of signalling problems. 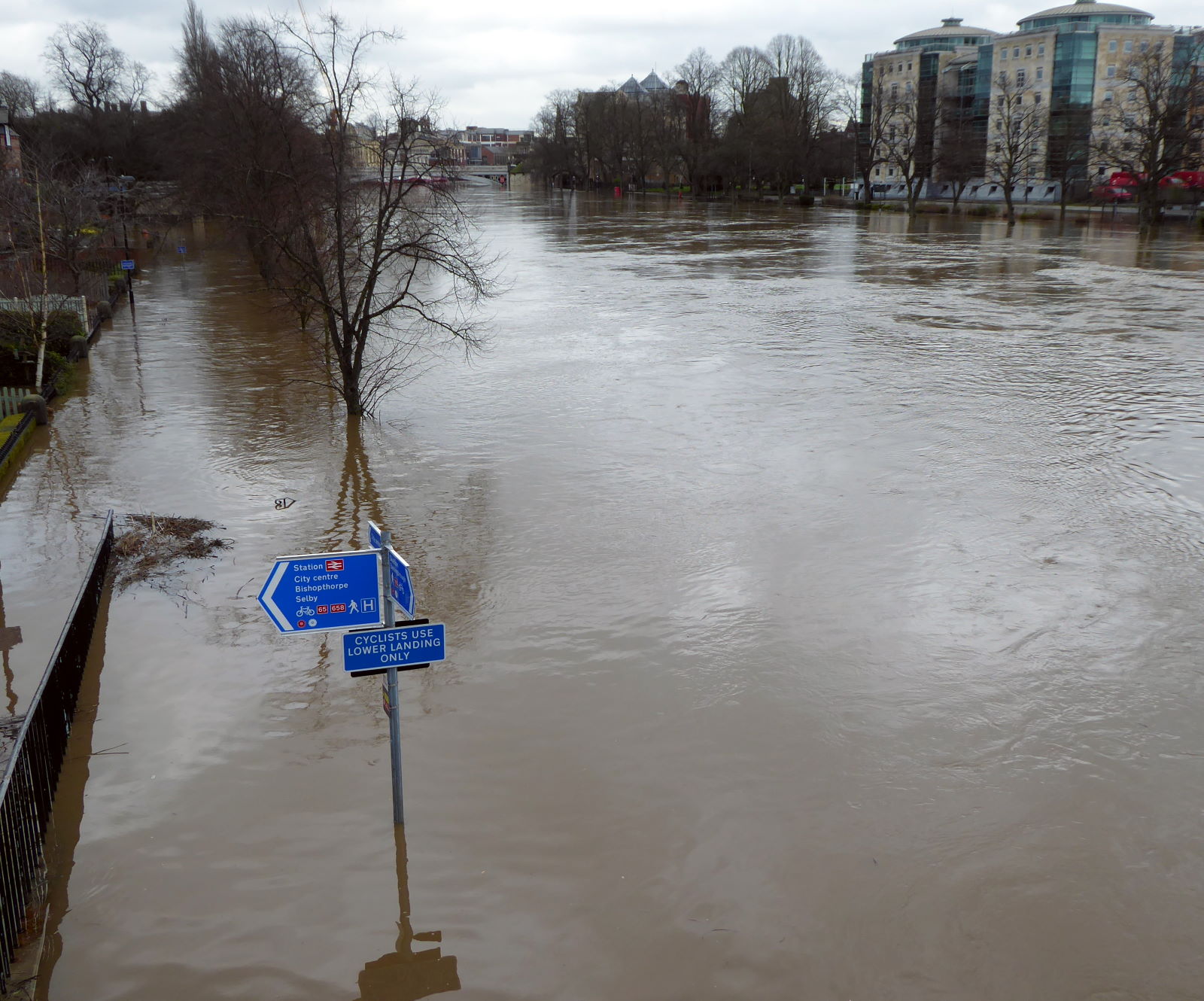 ‘Cyclists use lower landing only’, says the sign (pic).

Yes, you obviously wouldn’t want to use the upper one. It’s cobbled. 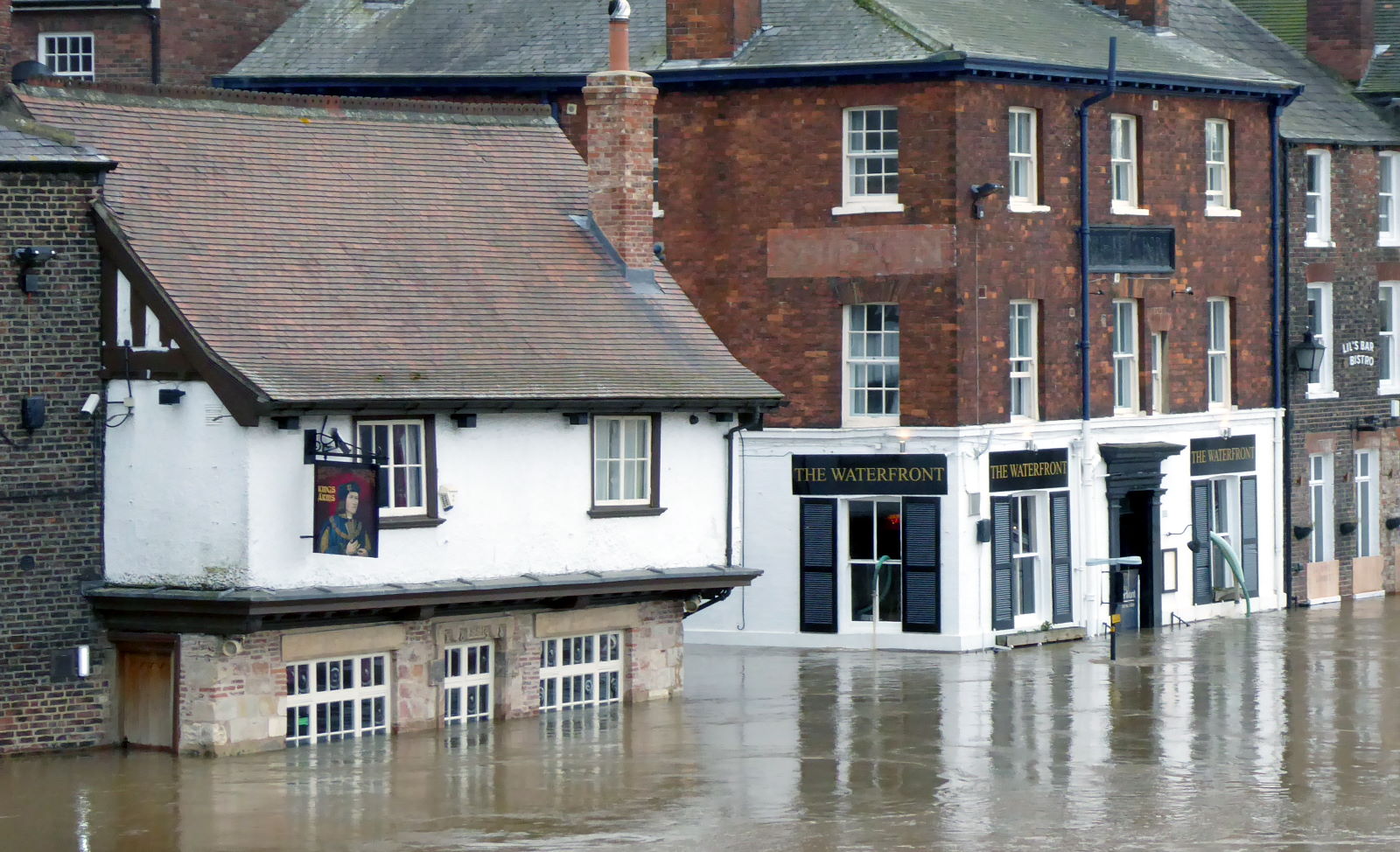 A standard shot of ‘flooded York’ is the King’s Arms (pic), a Sam Smith pub which turns into a lido every time the river swells. No customers today, obviously.

Seriously though, one must sympathise with SS’s owner, Humphrey Smith. Being inundated by foul, dirty liquid that leaves a lingering stench is no joke. Yes, you can insert your own joke about his beer. ONLY JOKING, LEGAL PEOPLE. I actually have a soft spot for Humphrey Smith. It’s a bog in the Dales. 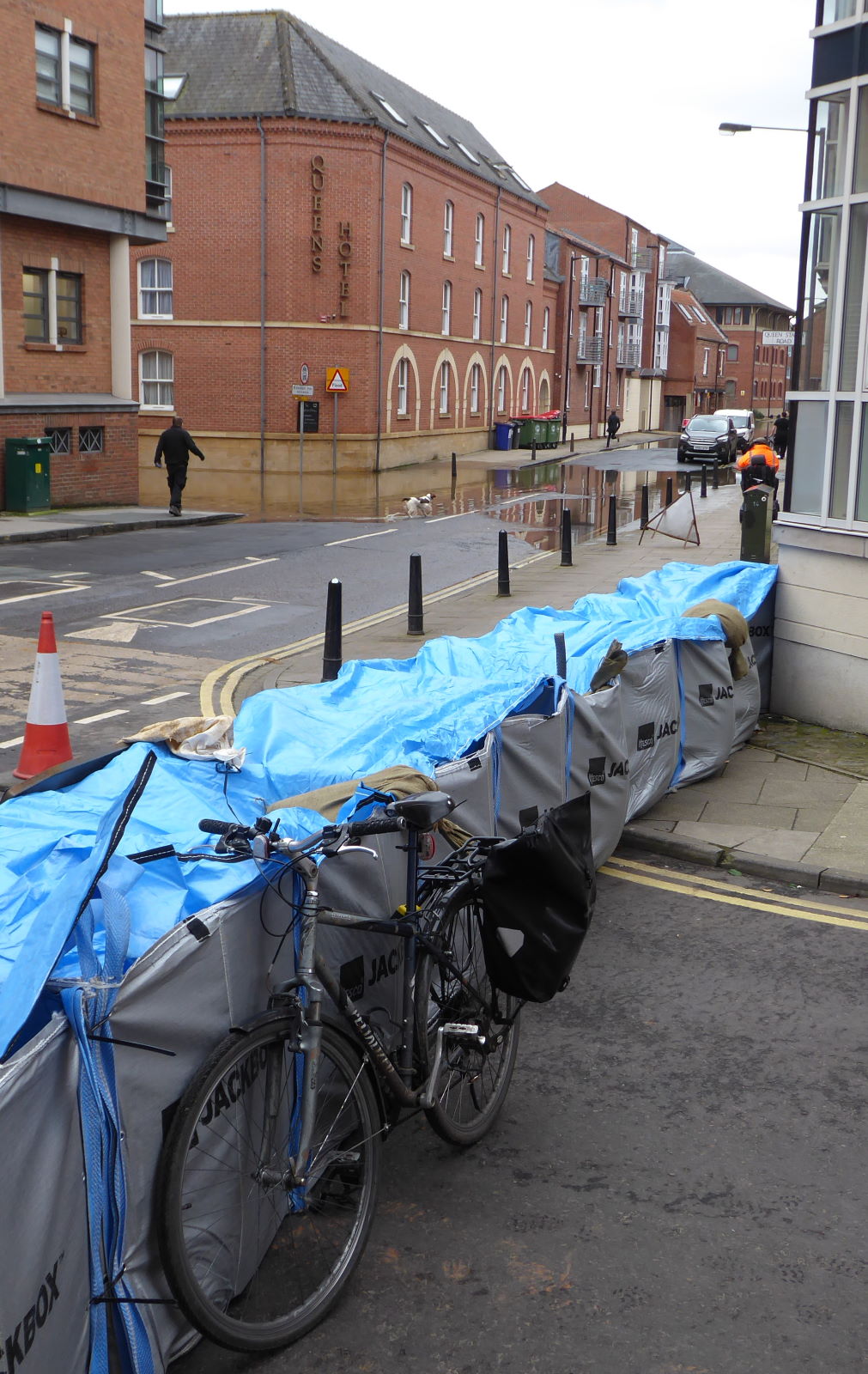 Skeldergate (pic) only floods when the river’s really high. Today’s max of 4.5m York can cope with, just, thanks to sandbags, floodgates and pumps.

But the peaks are getting higher. Currently, the defences work up to 4.8m. I’m told by Environment Agency people that the highest water levels each flood have risen by 60cm in the last century, and will go up a further 100cm in the next. 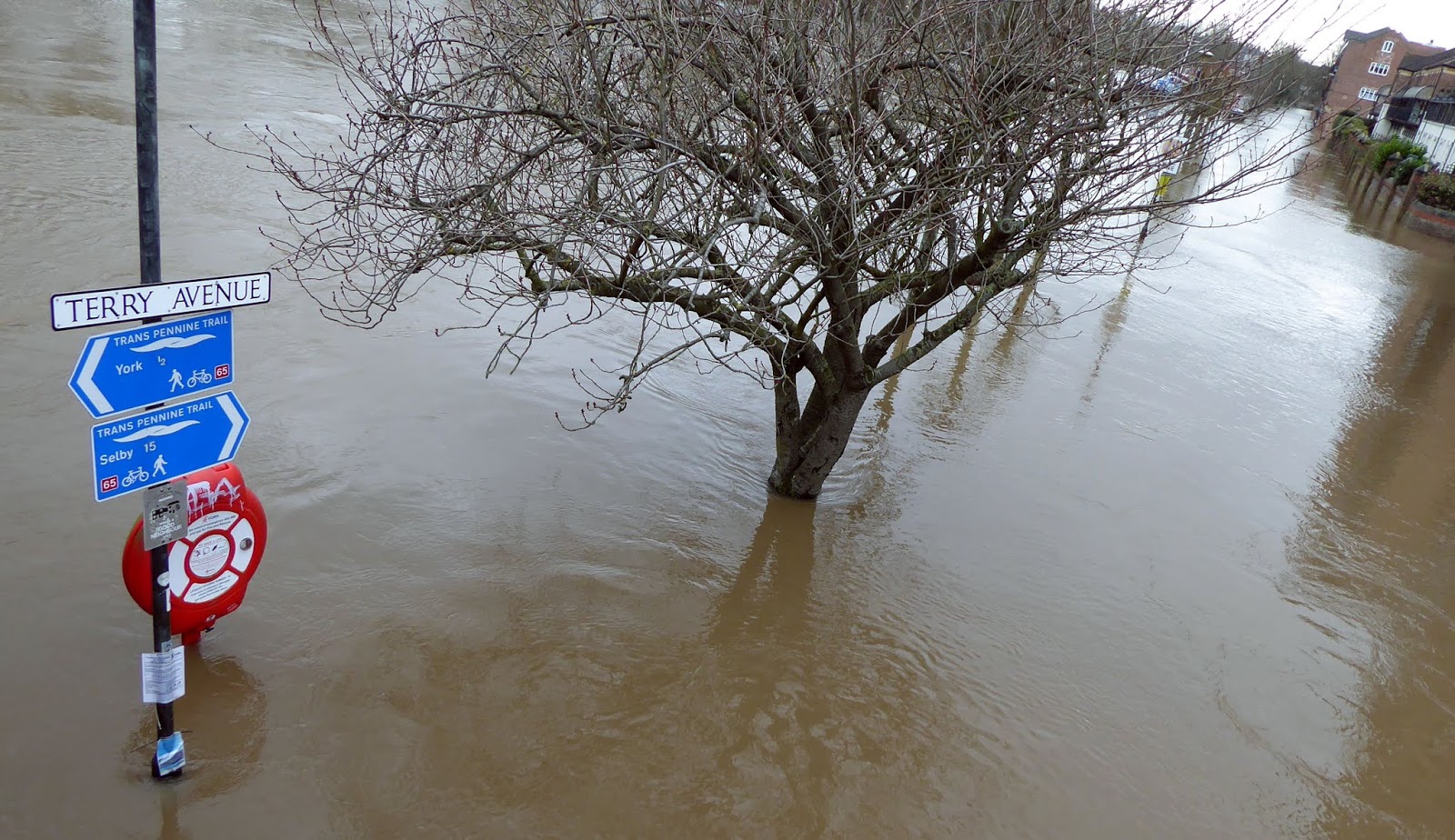 This used to be a once-in-a-decade water level (pic); well, this is the second one in a week, thanks to Ciara and Dennis. No doubt some of the people who make idiotic anti-bike comments on the York Press website are looking at this pic and thinking, Typical! All that money they spend on cycle routes and nobody’s using it. 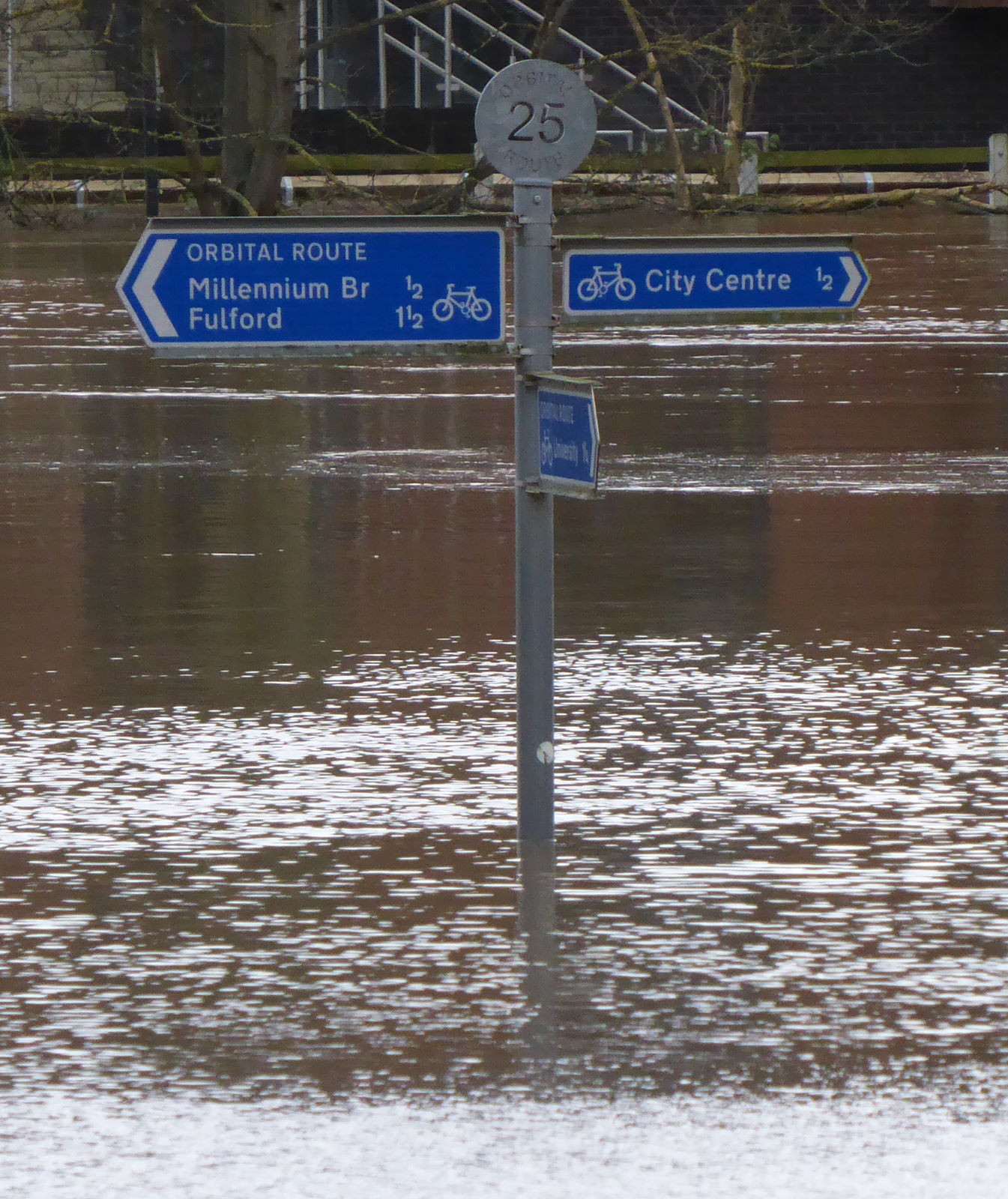 Though, these days, it’s increasingly the province of canoeists. 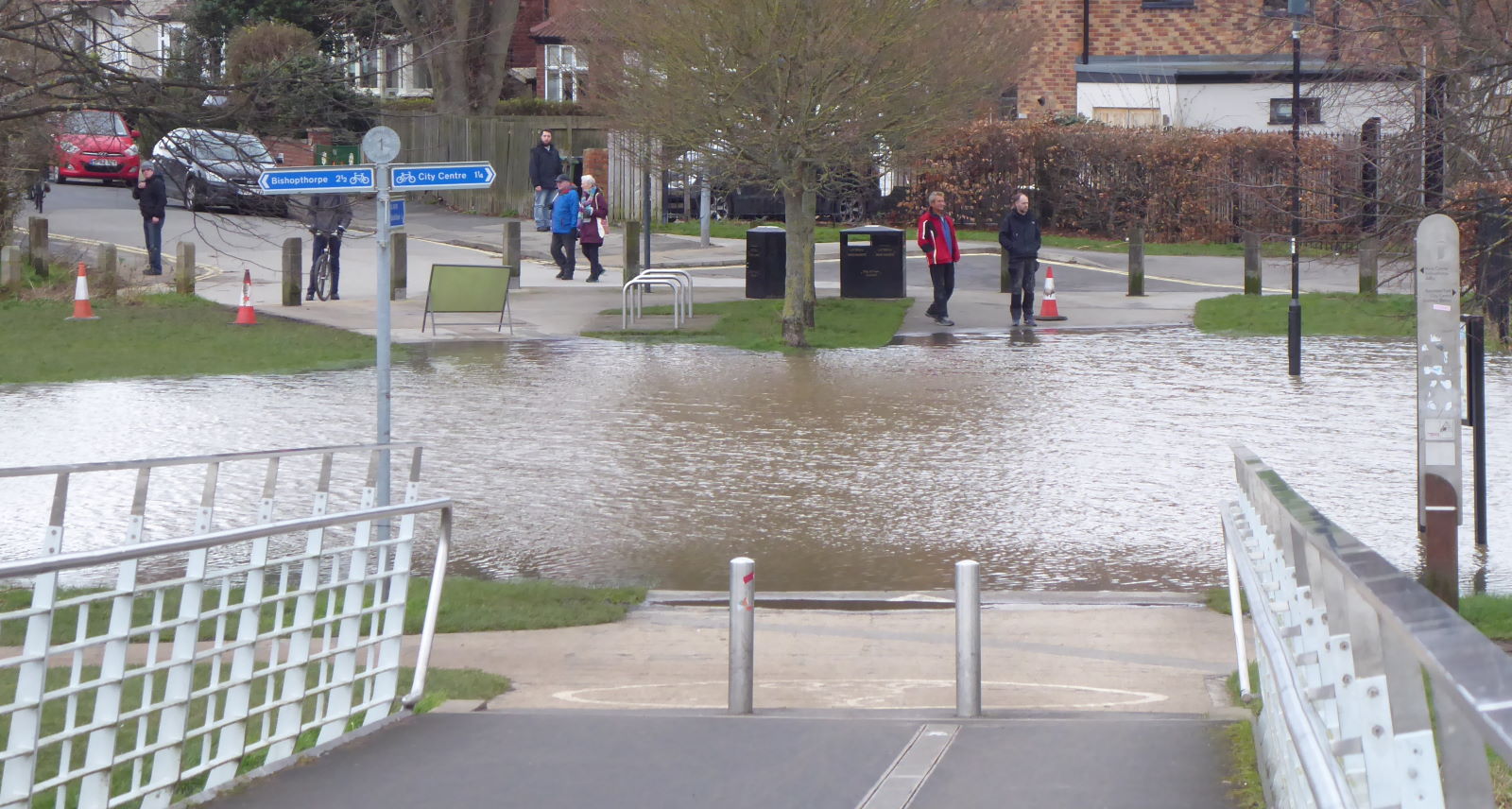 The ped-bike Millennium Bridge (pic) is a vital link between the South Bank and the University, as well as being a social space. So long as the river’s less than 4.5m above normal, anyway (remedial works are promised)… 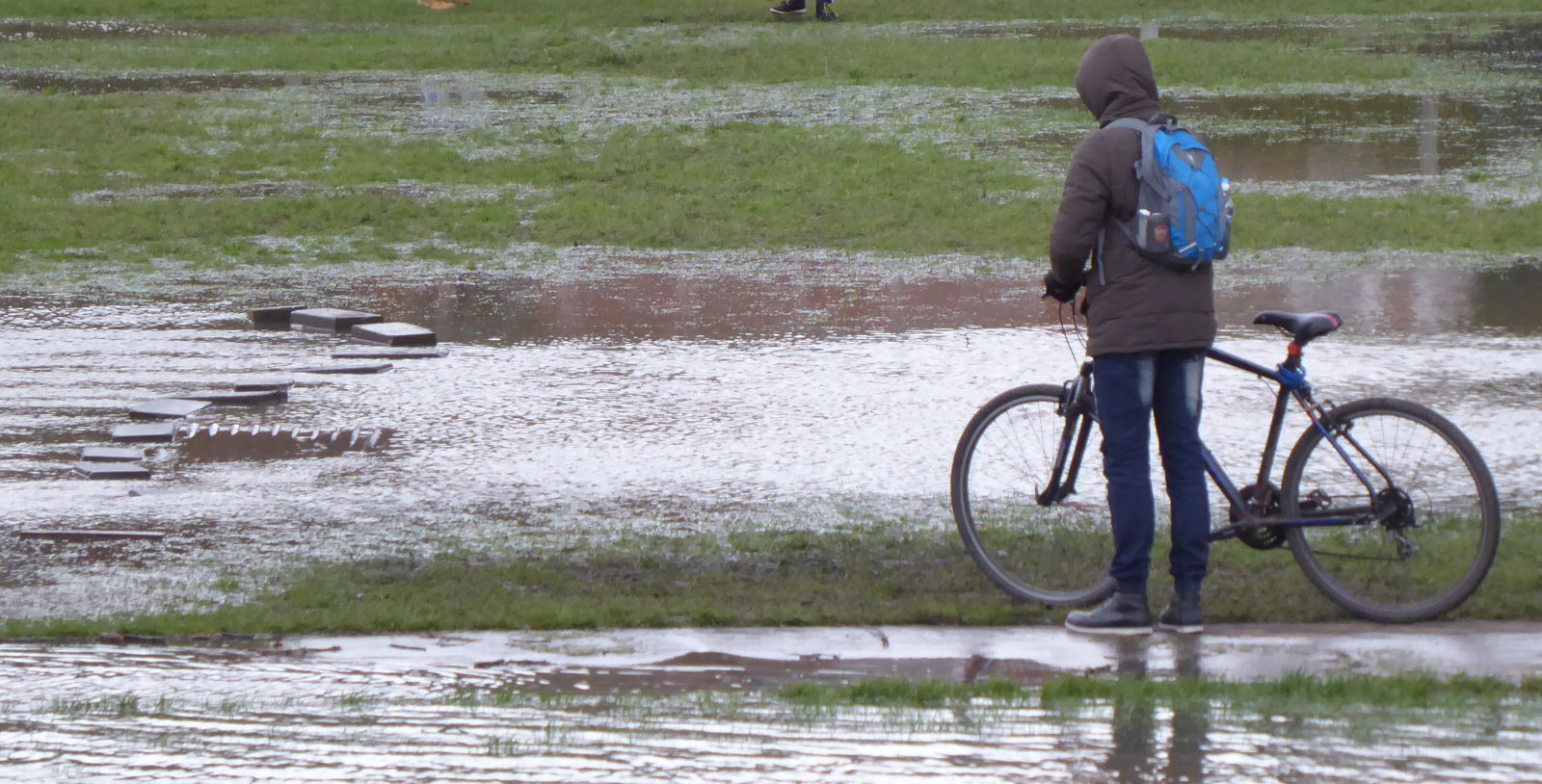 …and this cyclist thought long and hard before tackling the marshy bit blocking him off from the South Bank (pic). He eventually decided to ride through rather than risk the impromptu stepping stones. 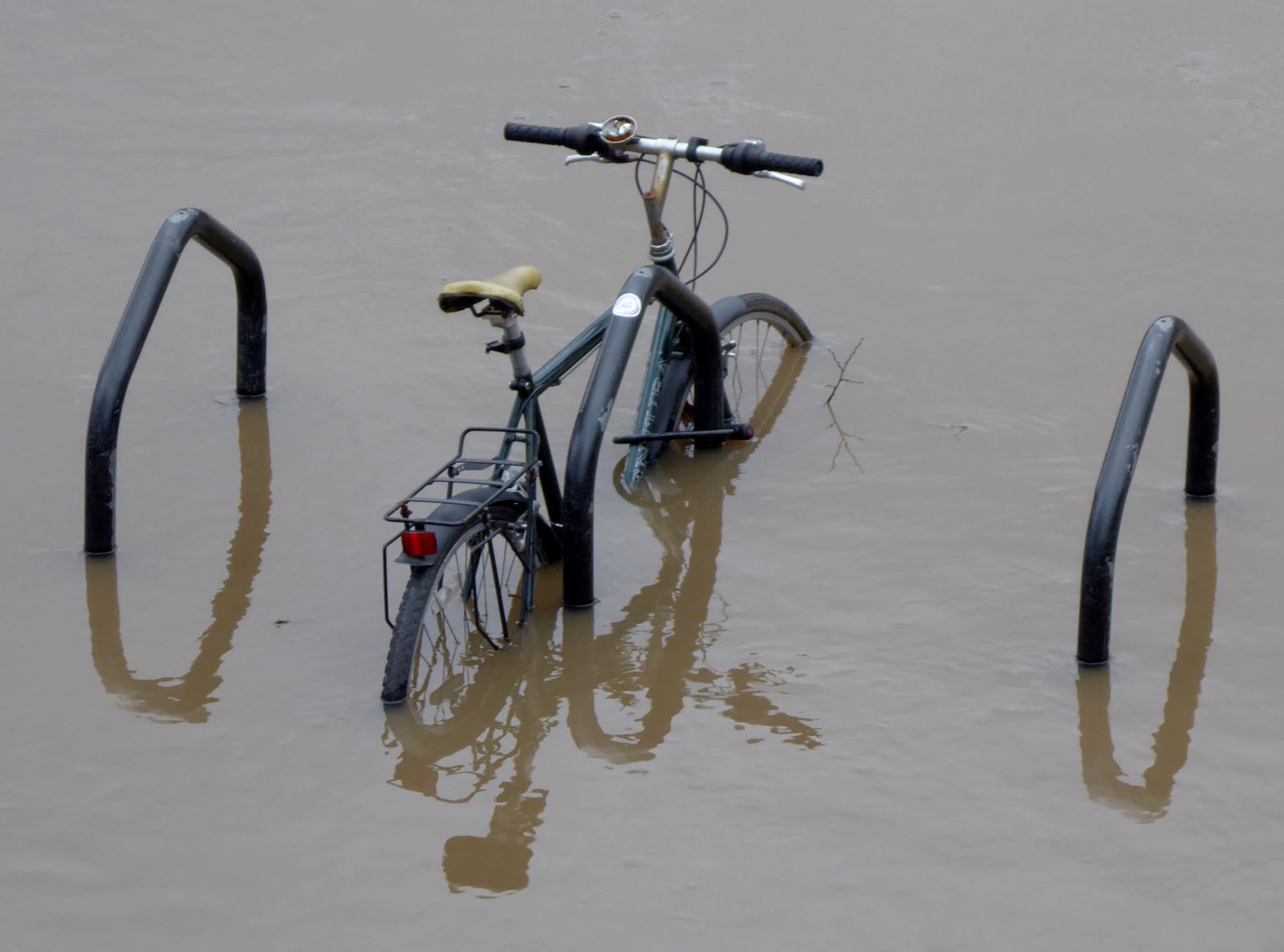 Encouragingly, it looks like York has got away with this pair of floods: 4.5m both times, but contained, just. We’ve stayed open for business, and the camera crews stalking Tower St and Skeldergate looking for disaster stories looked rather disappointed that everyone was coping OK, actually, thanks. This stranded bike (pic) was about as apocalyptic as things got… this time round. 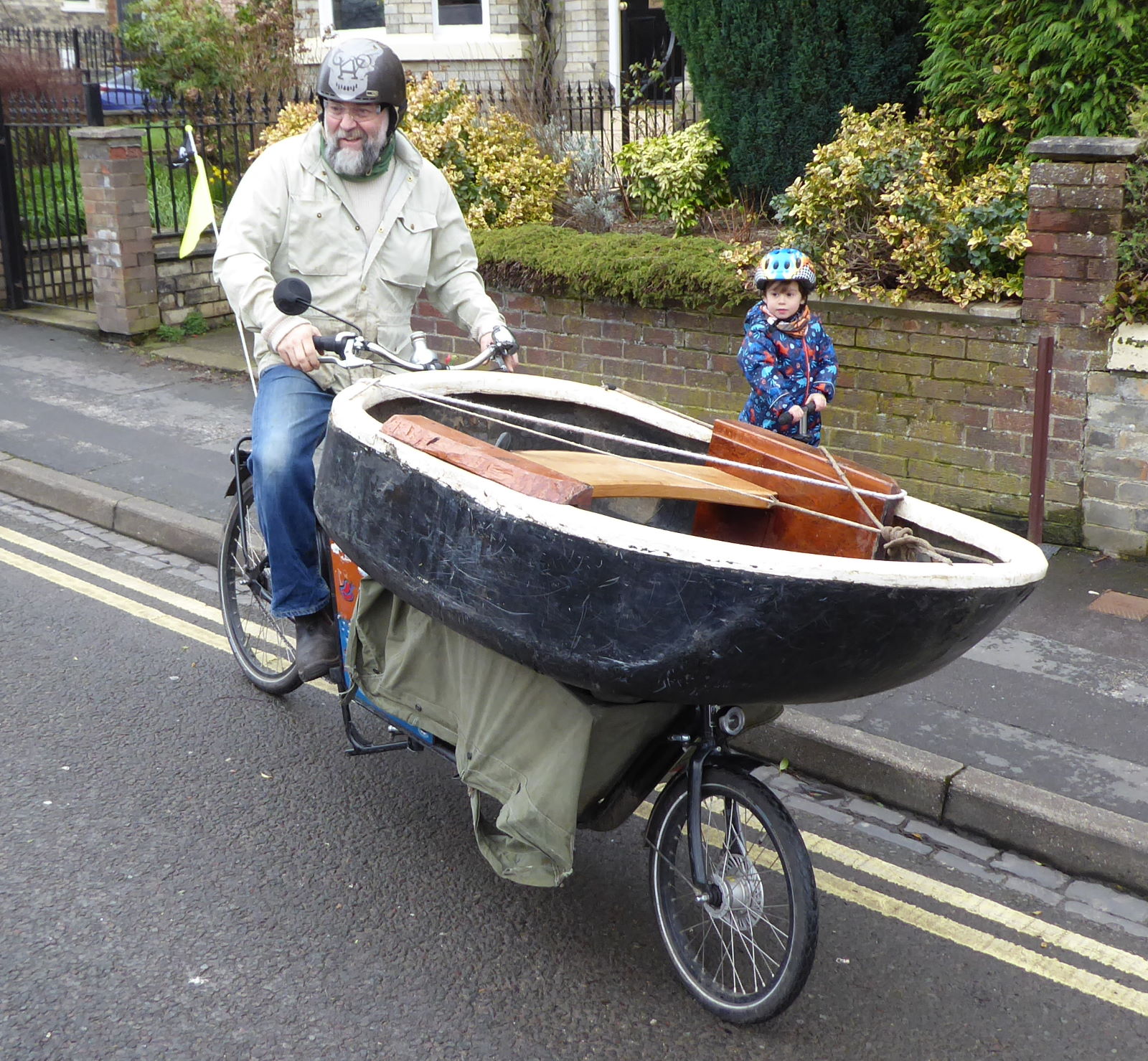 But what the future holds in an ever rainier world, who knows? I wasn’t joking about the canoes. This cyclist (pic), who we saw yesterday on Bishy Rd, is taking no chances.