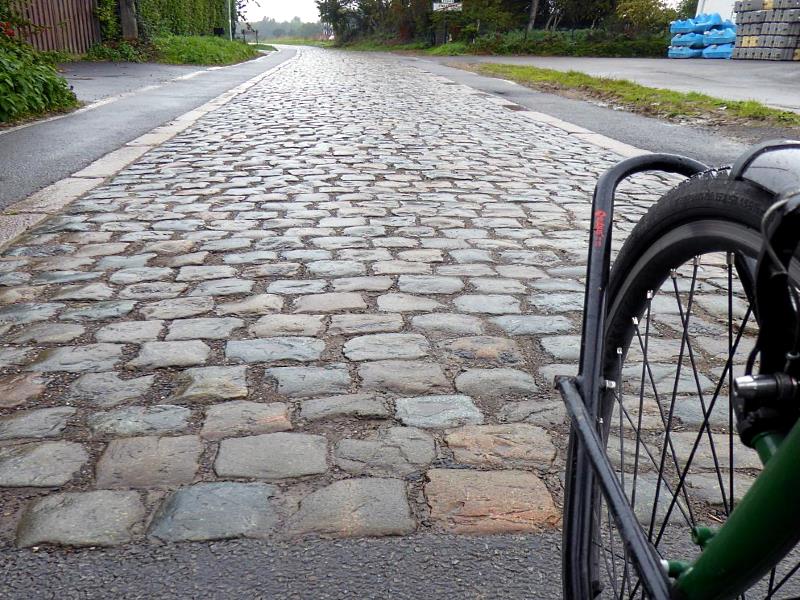 After a few days back in England for various reasons – jobs, jabs, appearing at major cycle touring festivals, having teeth out – I resumed my Interrail trip this morning. I took a dawn ferry, this time equipped with touring bike, from Dover.

It’s a rather scruffy and down-at-heel place, and wasn’t looking its best in 6am darkness amid driving rain. Neither was I. Negotiating the cross-current of HGVs and lost drivers on the puddled, drizzling concrete plains of the port rated somewhere below tooth extraction on the pleasure scale.

But a few hours later I was just outside Roubaix, fulfilling an ambition I’ve had since Easter Sunday. That evening I was in Košice, on my Slovakian End to End, in a brewpub watching the Paris-Roubaix race, sipping a pint made in conjunction with the local cycling organisation.

The event is notorious for stretches of bumpy cobbled roads. These add a bizarre challenge to riders more used to silky smooth tarmac, rattling nerves as much as the bikes.

As I watched Dylan van Baarle clatter his way to victory, and inspired by a second pint of cyclist-conditioned IPA, I resolved to ride the brick-paved roads I was watching. Now, a few months later, here I was, about to do so.

I wasn’t doing the whole 200km, of course: just the last 15km, from about the village of Chereng. The stretch of pavé starts just south of the town of Hem.

Riding it is, well, what you’d expect from brick setts. West Yorkshire is full of them, round places like Halifax or Hebden Bridge. Shibden Wall may be steeper, and cobblier; but Roubaix is much more famous. And as any daytime TV personality could tell you, fame trumps quality every time.

And I was taking it easy. For those riders going full tilt – and keen not to slip and tumble on the wet stones – a few shots of novocaine probably would be welcome.

Well, I made it over the 1.5km stretch of cobbles, only occasionally making use of the nice smooth tarmac pedestrian path at the side. Specifically, occasions such as the beginning, middle and end.

Roubaix is proud of its cycling status, as the welcome sign on Alfred Motte Ave states. Every year the riders come up here, taking a final short ceremonial stretch of paving, to finish by one of the town’s velodromes.

Here there’s a monument to the cobble – an ontological curio of a cut piece of stone representing a cut piece of stone; what would Magritte make of that? – and a bike cafe (the HQ of Roubaix Cycling Club) decorated with a list of the event’s winners.

I explored the town for a bit. (It has a reputation as France’s most Muslim area.) The town hall in the Grand Place is, erm, ornate and, ah, very striking. The style is, apparently, ‘Eclectic’, which I think comes from the Greek word for ‘kitschy mess’.

And, armed with a cycling map from the friendly Tourist Info, I also went for a spin along the canal into Belgium and back. The weather wasn’t any better there; still just as grey and damp as in France.

Finally I met up with my friends Tim (who returns to England tomorrow) and Nigel (who doesn’t, because he’s cycling with me for the next couple of weeks). We enjoyed some Belgian beers in a central bar, and I had a vindaloo that was about as spicy as a plate of lettuce.