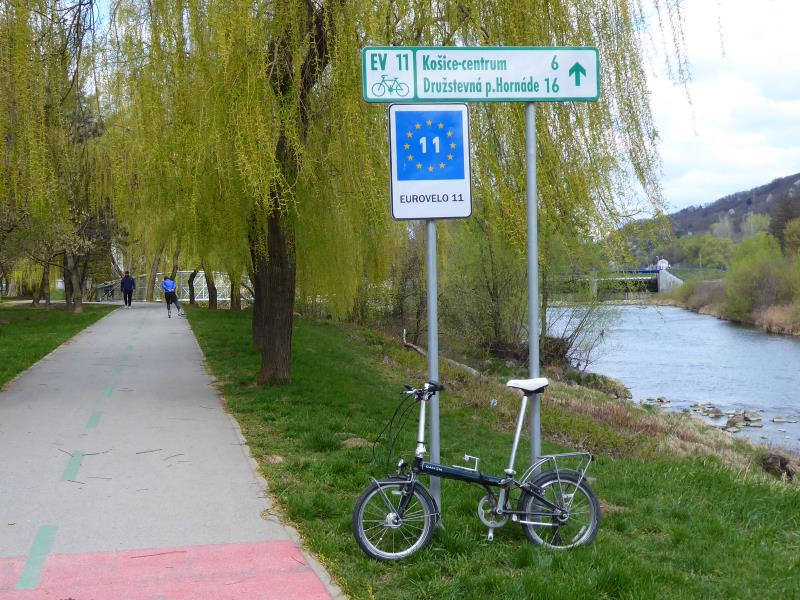 An easy day of exploring Košice by bike, rounded off with a beer specially brewed for cyclists. No wonder Czech and Slovak brewers are often said to be the world’s best.

I rode south from the city centre along the riverbank cycle path. It’s part of EV11, a 6,500km-long monster ‘Eurovelo’ route that links northern Norway with Greece. Or rather doesn’t, yet: it’s very fragmentary, as the piecemeal sections of it between Prešov and Košice demonstrate. However, the smooth, even skatable 8km I did today boast something very rare in matters of signage on EV route: signs.

When EV11’s tarmac inevitably ran out and turned into gravel at Krásna, I turned round and came back. And I had a very pleasant surprise in Hostinec, a well-known traditional pub right in the centre: on its enticing beer menu was a brew specially made for cyclists.

The English version of the description, according to Google Translate, is:
DRŽ HUBU (5%) / SESSION IPA / Another beer from the series of trail beers in cooperation with KE.CY (Košice Cycling Trails). A straightforward recipe for a light trial for your favourite light IPA. Solid heat in combination with cold hops is a sure bet.

Košice Cycling Trails, I salute you. The EV11 may be a work in progress, but this beer is definitely complete. And smooth enough skate on, too.