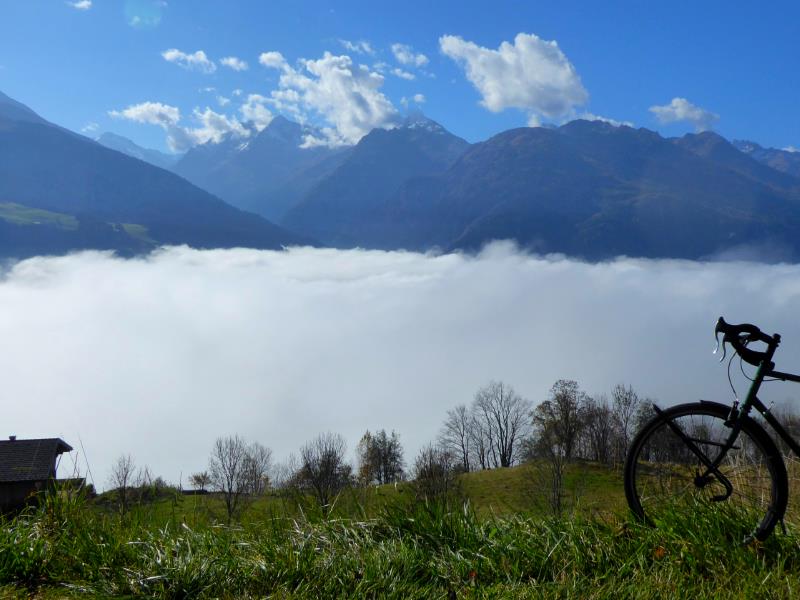 Thanks to the hens and ducks in the hostel garden, we could enjoy a fine breakfast of fresh poached eggs on toast. Thanks to my cooking, they turned out scrambled. Thanks to my aim, they were barely on the plate, never mind the toast

Still, it set us up for the morning, and I proved my animal magnetism by feeding said domestic fowl with stale bread. The bread hadn’t been stale to start with, but I had taken rather a long time familiarising myself with the kitchen.

So off went, clouds drifting across the damp green hillsides like shreds of sheep’s fleece catching on the treetops. We took an offroad track through the woods. I was happy. Particularly when we went past a place called Giggling.

We had to vault the 1273m Thurn Pass – the second of our two climbs on this End to End – and to do that we had to ride a couple of dozen miles of main road. It was OK, actually, with a comfortably-graded ascent to the summit itself.

From here it’s downhill all the way to Vienna, in principle, though in principle Nationwide bank values its customers. But certainly we now had a few miles of whooshing downhill on a wide main road.

And an astonishing view: a temperature inversion had laid out thick fluffy white clouds below us, like a duvet, but the sky here was liquid blue. Mountain peaks broke out through the cloud cover. It was like listening to Joni Mitchell in an aircraft. Except I hate flying.

The hurtle down was chilly and damp, as we barrelled through the foggy nimbostratus, or perhaps altostratus, or maybe contraltostratus. We warmed up with a coffee from a mall in the town at the bottom, though now we were back down on the levels of the valley floor, it was sunny and warm again.

Normal Austrian bike-route service was resumed, in other words wide smooth car-free paths across green meadows, with mountains either side like advertising hoardings.

And it may be October, but it got hot. So hot in fact I had a wobble at the top of one village climb, and suddenly felt a bit faint, at least, not 100%, anyway. Say 60% on a Photoshop slider. Enough to see the background showing through.

So I had to cool down by a shady fountain and hydrate – the problem I think – before continuing. At least we knew that St Veit, the village with our hotel, was mostly downhill from here.

Mostly, not all. After some joyous freewheeling down good valley roadside paths we had a stiff climb of 300m or so up winding country lanes. Then a plummet down to the valley floor we’d come from. Then another 300m climb up to the village over the other side. We earned our beer and pizza.

The hotel was rather plush, good enough to have bathrobes and slippers in fact, and an exclusive sauna. So exclusive it was closed, but that didn’t stop me from wandering round the hotel in my trunks and said bathrobe. I wanted full value for money.