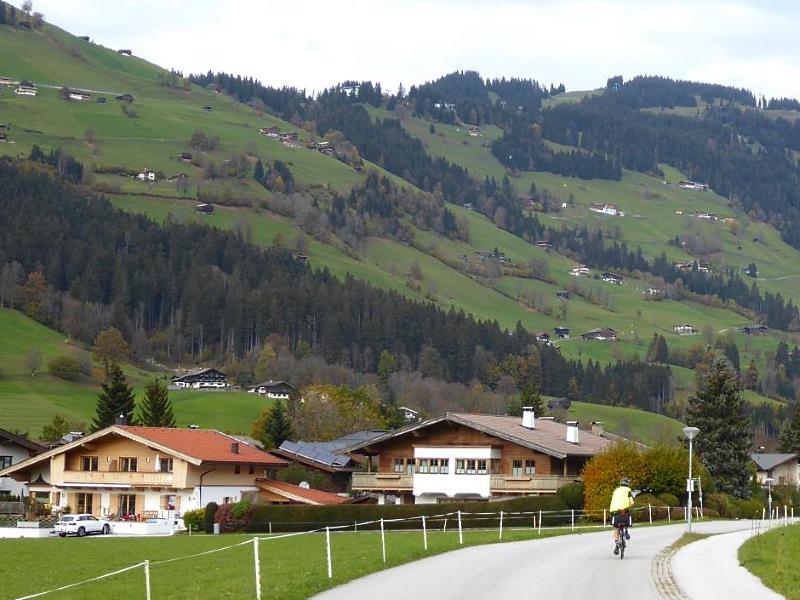 Another glorious day of sunshine, smooth paths and thrilling scenery. Our fast, flat run out of Innsbruck was punctuated by a fine rich coffee and pastry in a classy historic-centre cafe. That clearly doesn’t narrow it down when trying to identify where it was, because it seems all Austrian cafes are like that.

We lunched at an inexpensive place where the real locals eat, without a tourist in sight – McDonald’s, actually, in the town of Wörgl – and then the climb began, as we cut south up from the Inn valley towards the hill country of Kitzbühel.

At one point we had to dodge a tractor enthusiastically spraying manure. Thank goodness, this was the only time in Austria that we had to take crap from drivers.

This was a lovely change of pace. Not if you had an e-bike of course, as everyone else seemed to, whizzing past us up the steady inclines. But I now had time to enjoy the softer, damper, greener, more intimate, lusher hills around me, in contrast to the more cinematic alpine peaks of the previous days. At my speed, quite a lot of time.

We were on country lanes now, but traffic was infrequent, and it was stress-free stuff. Some moderate uphills got us to a plateau of resorty chalet villages and well-signposted bike paths that led to Kitzbühel.

Ah, yes, Kitzbühel, ‘one of the most famous and exclusive ski resorts in the world… frequented primarily by the international high society and has the most expensive real estate in Austria’, says Wikipedia. We were out of season of course, between summer hikers and winter skiers, and we’d taken the only budget option in town, an informal backpacker hostel in which international high society was noticeably absent.

I thought it was rather fun, with its kitchen garden full of chickens and ducks supplying breakfast eggs, engagingly bonkers host, jumble-sale common room, city-centre location, and dorm beds for the cost of a beer in the town’s more upscale bistros. It made a big impression on Nigel too, in fact he was lost for words.

We wandered the pretty centre. It’s nice enough, but cost-conscious cycle-tourists are clearly not the target market here. We found a very reasonable pizza restaurant just off-piste, but the spiffy bars and restos in the historic core were targeted to affluent skiers. Skiing? That requires balance. I’m not balanced.

So no point playing it, then.