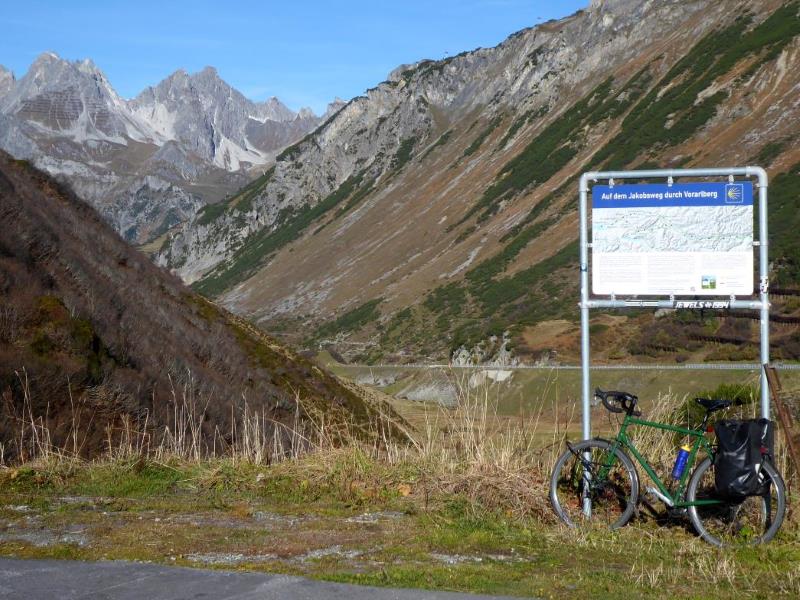 A sixty-mile descent to Innsbruck today, all in gloriously sunny autumn weather on beautiful car-free paths. First though we had to get up to the 1800m summit of the Arlberg Pass, fuelled by about half-a-dozen eggs each from our splendid guesthouse breakfast. Not your ordinary lays, but fresh quail’s eggs, from their own organic smallholding.

Mind you, it took us a few minutes to realise what they were, speckled and confectionery-like, nestled in a cute little drawstring bag on the breakfast table. I’d thought they were decorations of some kind.

Which was understandable: I’d just tried to eat the muesli next to it and found it was pot-pourri.

Anyway, our morning ascent was a pleasure. First, a gradual rise up a valley with sharp mountains either side to the village of Stuben; then, the Flexenstrasse that zigzagged above its chalets and residential blocks like an ornamental staircase.

The peak-ringed summit at St Christoph was lofty and fresh. There’s nothing like the meditative solitude of a timeless, unspoilt alpine ridgetop lane that you have to yourself. Which this wasn’t. Because it was on a main road, with a restaurant, coffee kiosk, and three-storey souvenir shop.

Still, energised by a hot chocolate, we could revel in the long downhill that would essentially last for the rest of the day, abrupt at first, then gentler and finally only perceptible because you were in a gear lower than you expected.

First came a long Galerie – a sort of half-tunnel, with one side open, the roof supported by pillars – as we plummeted down the mountainside on the untrafficked old lane, now bypassed by the main road. It was chilly stuff, with braking difficult for freezing fingers: at St Anton we had to put on some gloves and extra layers. (The Dutch: ‘There’s no such thing as bad weather, only bad clothing.’ Captain Oates: ‘Cobblers.’)

We followed the Stanzertal Radweg (a car-free tarmac path) along a small river that seemed impatient to get to Innsbruck through the damp woods and hutty villages.

After Wald and Landeck things levelled up, in much the same way as Northern England and Southern England never do, and we had to pedal a bit again.

From here to Innsbruck it was essentially all flattish-downhillish riding on smooth untrafficked paths through sunny meadowland with mountains either side: green below, grey at both sides, blue above.

Nigel remembered a motorway services from a previous bike trip that was different from the British model. No blocky concrete sheds flogging you cardboard burgers and wooden chips here: this consisted of alpine-meadow chalets with the motorway invisible behind trees, and we had a hearty and reassuringly inexpensive bowl of soup and bacon dumplings the size of a pillow.

The forty-odd miles from here to Innsbruck were a delight, all steady cycling in wonderful scenery. We rolled into town around five and headed to our hotel. It was sunny, warm, and lots of young people (it’s a lively student town) were lounging around the riverside with picnics and snacks.

Just one thing remained to make this a perfect day: a cool beer from the hotel bar. Unfortunately the hotel bar was out of beer. Ah well; if we ever were to have a perfect day, what would be the point of continuing? Philosophers, discuss.

Fortunately, the town did offer not only a lovely historic centre full of salubrious restaurants and bistros, but also a nearby locals’ pub where they played darts, joked robustly with each other in incomprehensibly strong regional accents, and drank cheap beer.

Guess where we went.