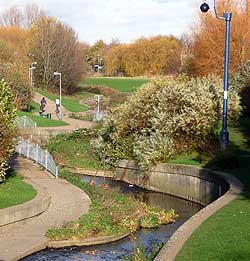 The Waterlink Way, ambling six or so miles south from Greenwich to South Norwood, is one of south London’s pleasantest leisure rides. For most of its length it runs through traffic-free parks alongside the Ravensbourne, a watercourse that can’t decide if it wants to be a stream, a river, or clump of reeds. Today was sunny and I had a couple of free years in my diary, so I cycled along it.

It also looks very promising for odd things to see en route. In Deptford you go past this van made of tinfoil emblazoned with the legend I ACCUSE THE OIL COMPANIES OF. Failing to plan ahead, perhaps? 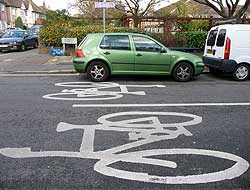 A bit later, on Marsala Road, are the biggest painted on-road cycle symbols I’ve seen in London. Usually I complain that such symbols are too small and can be missed by drivers. This one must be visible from the International Space Station. 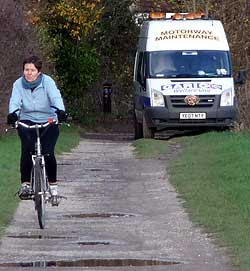 And finally, what was this Motorway Maintenance vehicle doing on a bridleway in South Norwood Park? The M25’s miles away, mate…

It’s an easy, family-friendly trip of an hour or so. In theory you can follow the fishtail-shaped Sustrans signs all the way to Gatwick airport. In practice you’ll probably get bored in the steppes of South Norwood park, which is surprisingly austere, and even more surprisingly crossed by a tram at the southern end.

For your trip back to central London there are lots of train stations and a bewildering web of lines that never quite go to the terminus you expect. I accuse the train operating companies of.