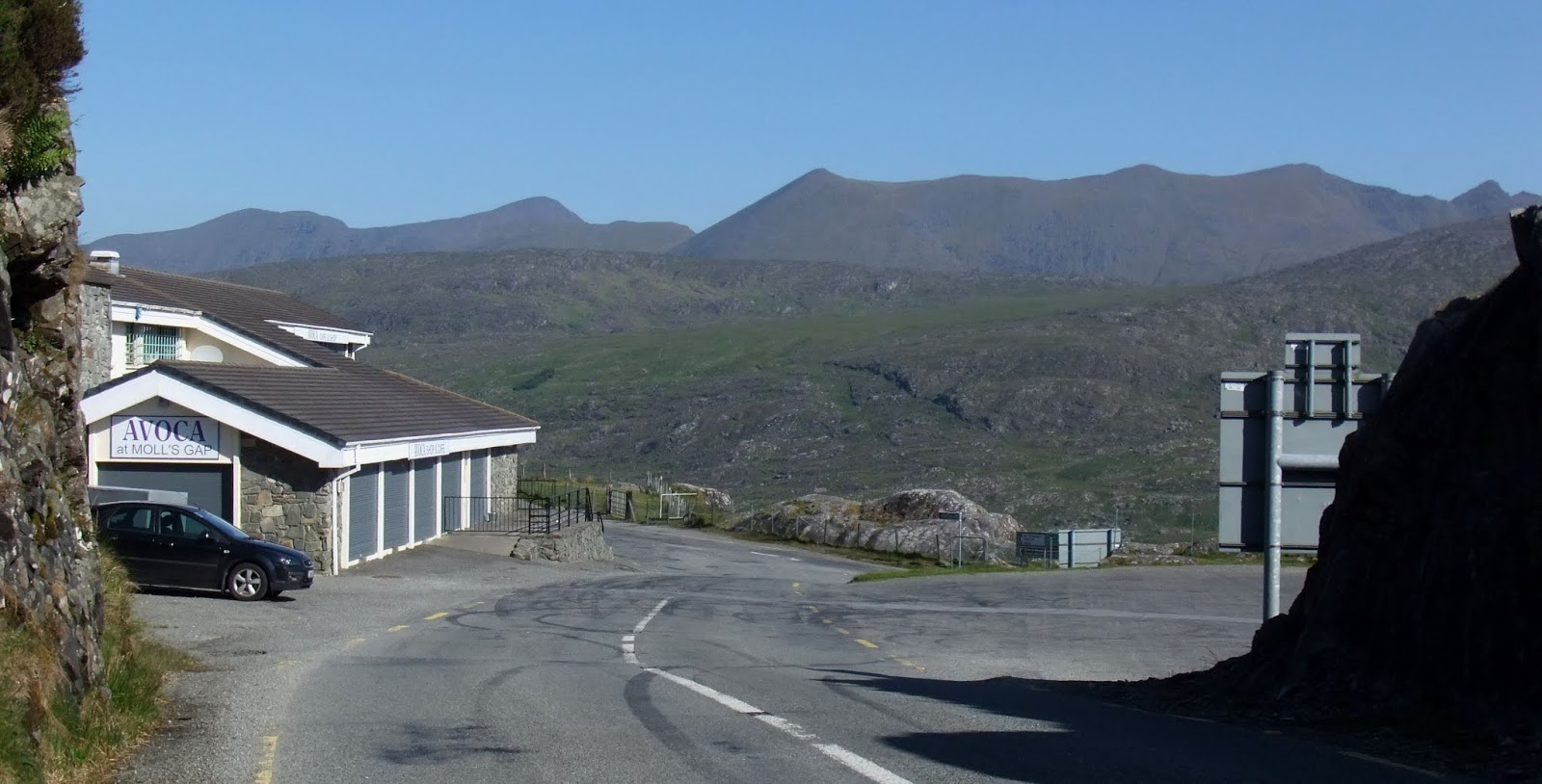 The morning climb up to the notch of Moll’s Gap (pic) was slow and evenly-graded, the sun low, the green expanses already hot. With the new view down over the other side I struck west towards Ballaghbeama: a delightful, traffic-free, long downhill swoop at the perfect pace, 15mph or so, with splendid open scenery all around, green and intense. 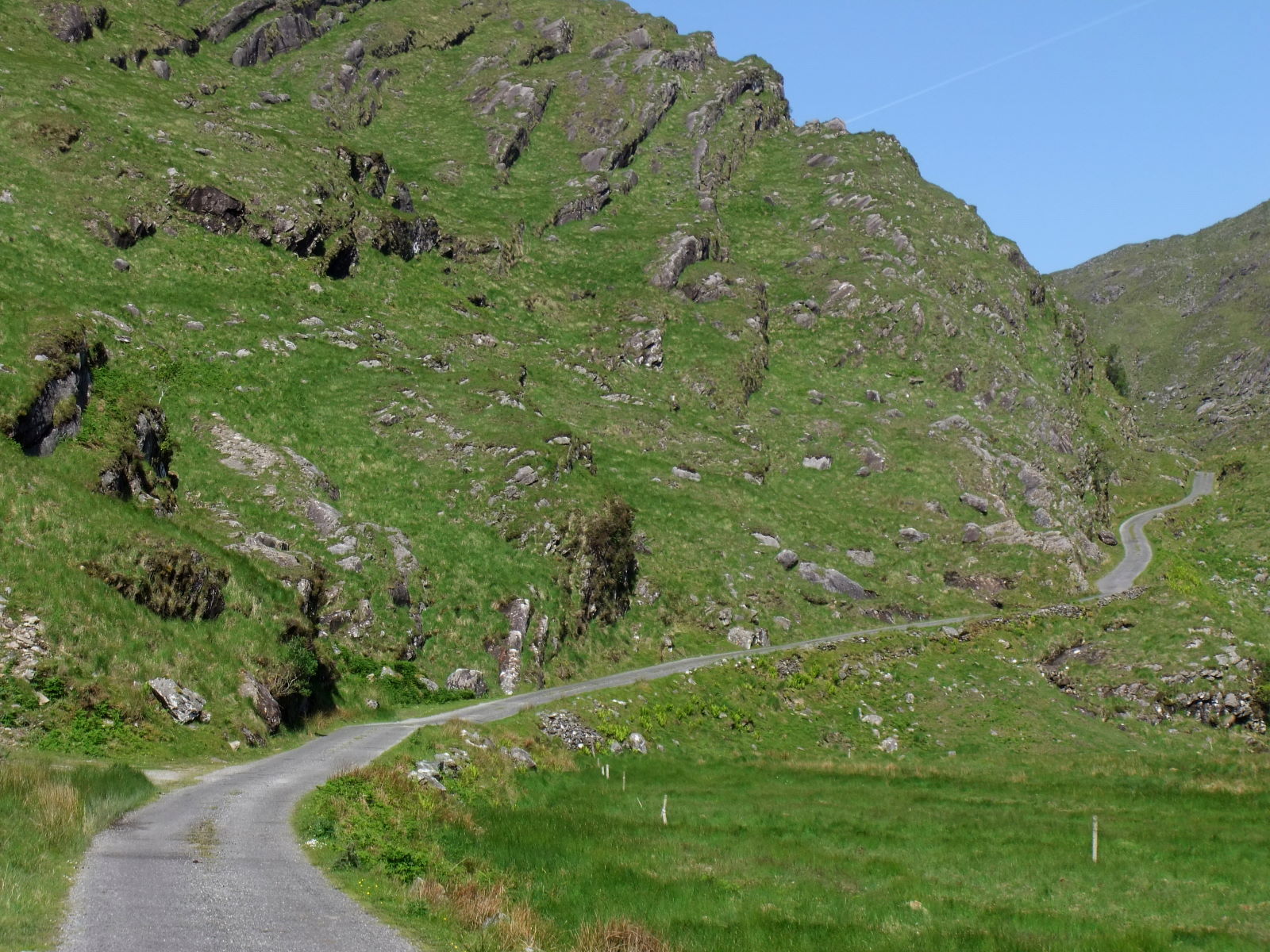 Somewhere on the ascent of Ballaghbeama (pic) I was passed by a Google Street View camera car. So of course I waved at it, indicating clearly with my extended middle finger that there was another vehicle up ahead.

If you scrutinise the Street View of the road now, selecting the ‘June 2011’ images from the clock icon up top left, you’ll see that for some stretches the June 2011 imagery does not appear. Well, now you know why. 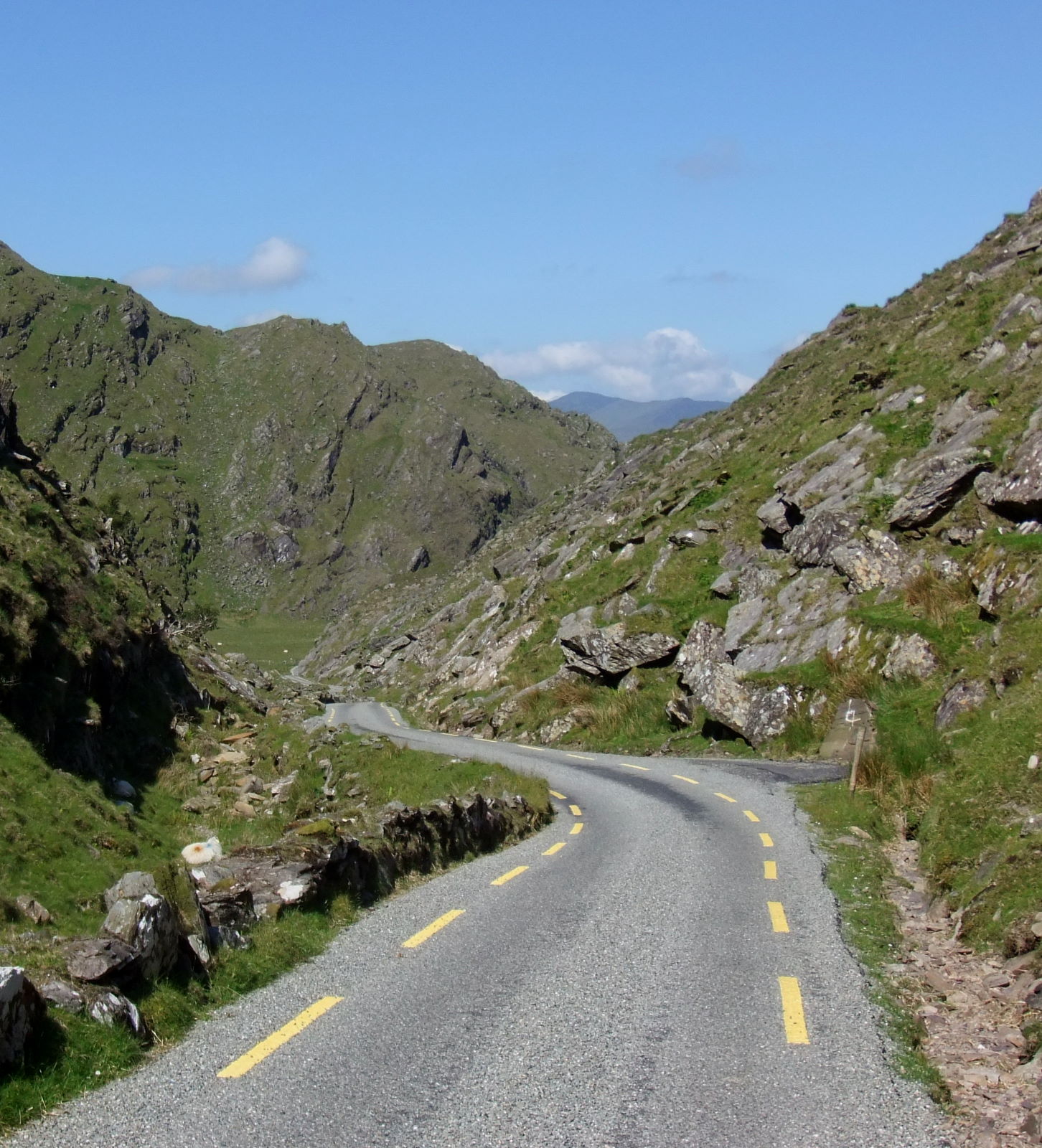 The other side of Ballaghbeama was an ecstatic freewheel with more glorious mountain scenery, and eventually it turned into the climb up to Ballaghasheen Pass (pic).

In southwest Ireland, what goes down must come up eventually. 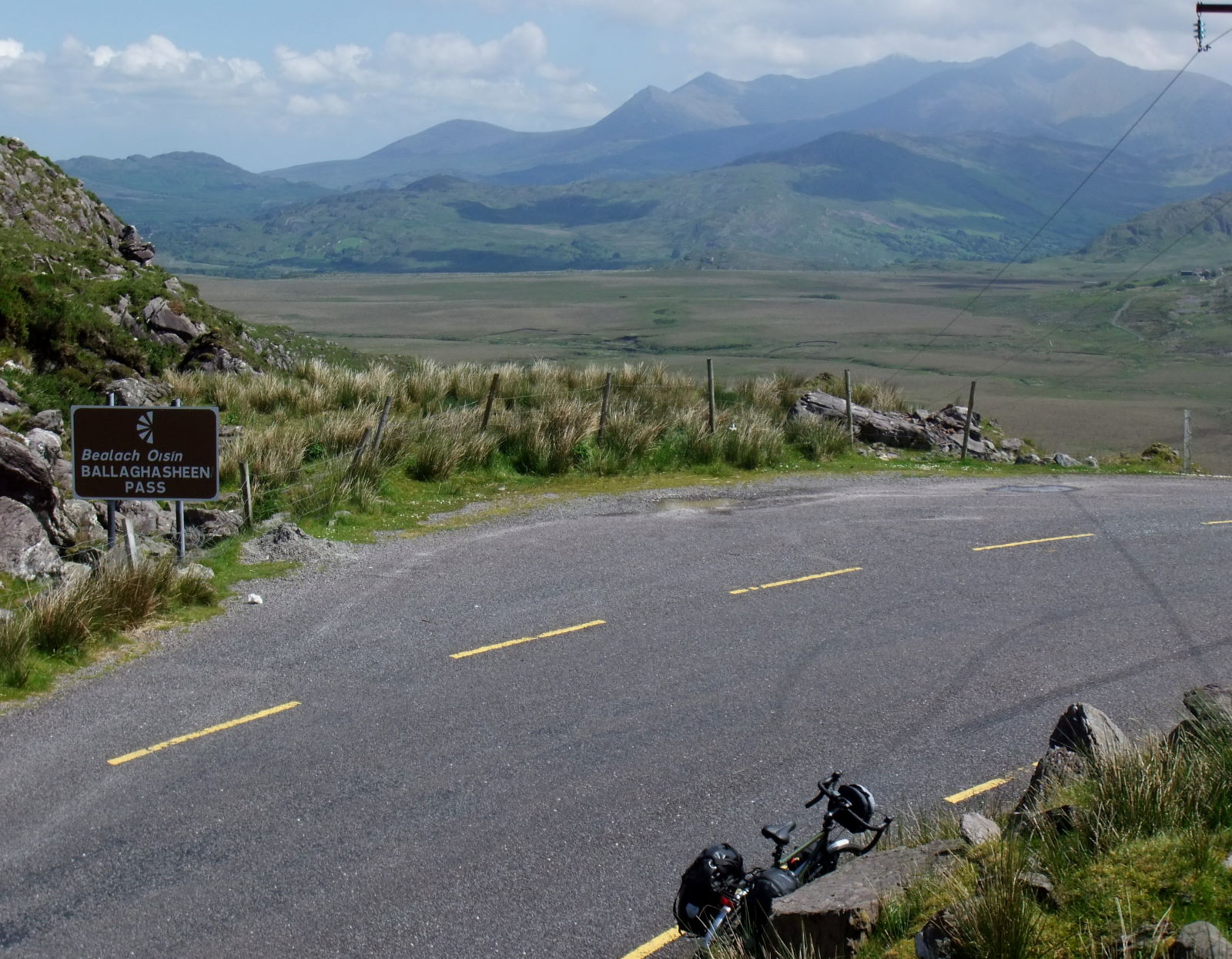 Ballaghasheen’s summit offered another grand vista down the other side (pic). I had been promised a great view of ‘Macgillycuddy’s Reeks’, and I’d been wondering what they would turn out to be; they sounded something medical and rather unpleasant.

Those pointy mountain tops, though, was the answer, perhaps a bit like the Cuillins on Skye: certainly the views here are as good as anything in the Scottish Highlands. But I wasn’t heading their way. I was turning back here, to get to my hostel in Killarney. 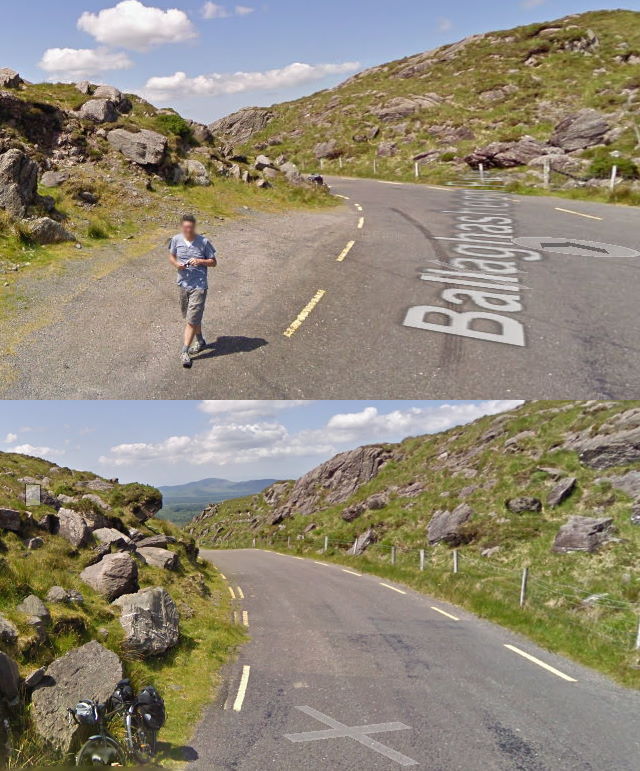 As I admired the view, my friend the Google Street View van reappeared, still snapping away at our privacy.

You can see images of me and bike (pic) on the June 2011 layer of the Street View of the summit.

Because I’ve helpfully linked you to it, it totally undermines my point about privacy, of course. 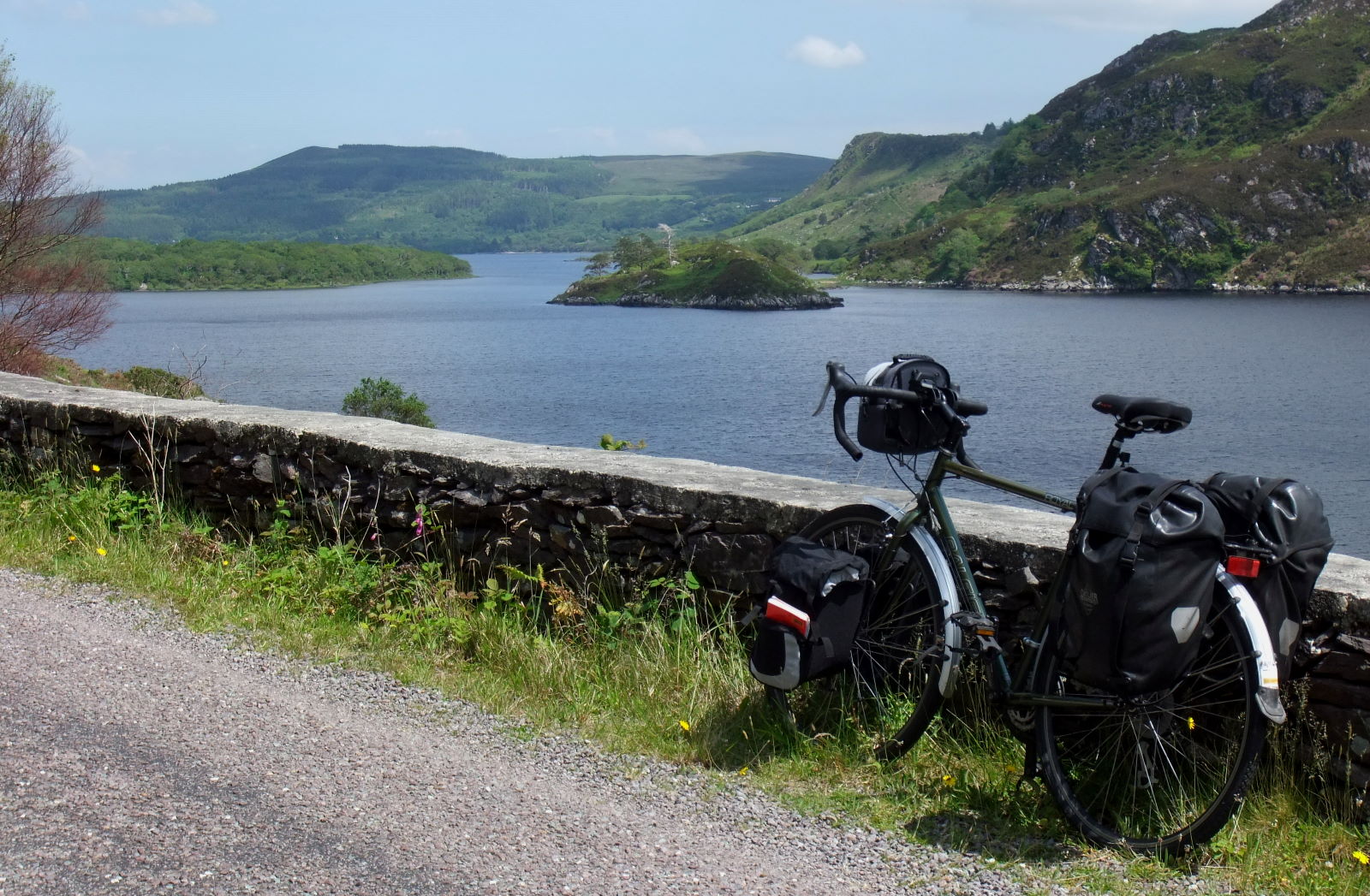 It was a long gleeful hurtle back to the turn off and then to Glensomething and Lough Caragh’s wonderful lakeside road (pic) in perfect sunshine.

The sunblock worked a treat at protecting me from the fierce sun, though not quite as effectively as the stuff I used when I did the British End to End in 1997. I put some on at Land’s End, and immediately it clouded over and rained for three weeks.

At Killorglin, a bustling and cheery local town with lots of shops, I stopped for water. The final hour or so was an 11-mile swirl along flat roads with a tailwind past pleasant lake views to Killarney.

Killarney centre, where I shopped for dinner, put me in mind of posh nail varnish. Not because it was glossy or stylish, but because it was tacky and expensive. I unwisely bought some chips for a euro, which tasted of fried cardboard and were overpriced by about 90 cents.

The hostel, a grand old baronial house in large grounds, was friendly and spacious, but had the slowest internet connection ever: email download was painful, pausing for long periods at random between words. It was like watching George VI perform a Pinter play. But I was happy to be here, for two nights indeed, with an event to organise for tomorrow evening and some people to meet up with…