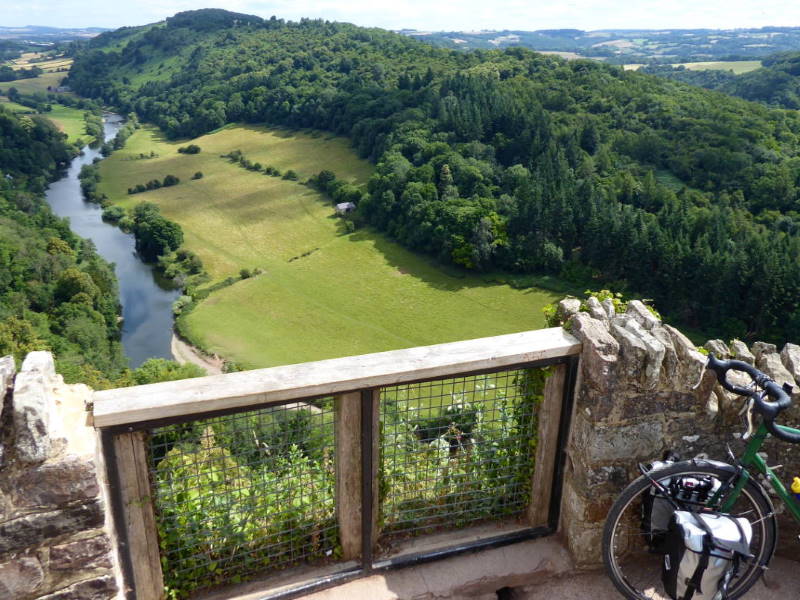 Today was my picturesque day. In more ways than the obvious. The British tourist industry began on this river in 1782, when the Rev William Gilpin published ‘Observations on the River Wye’. Upper classes, blocked from the European Grand Tour by the Napoleonic Wars, flocked to take the two-day boat trip down the water from Ross-on-Wye to Chepstow.

The idea of ‘holiday snaps’ started right here, 240 years ago. Gilpin theorised about tourism, and established the concept of the ‘picturesque’ – capturing the spirit, and therefore memories, of your trip, in an image. There were special painting boats, kitted up for artists, who could sketch the romantic ruins of Goodrich Castle and the majestic bends of Symonds Yat where the Wye is walled in by high lush hillsides, and perhaps even dash off a quick few selfies and group portraits for use on the social media of pamphlets and broadsheets.

Anyway, I took my time over breakfast in the morning to savour my lovely riverside, and pubside, camping spot. As did the heron, stalking patiently there as the dawn mist steamed gently over the water’s surface. I chatted pleasantly to the pub owner, a laid-back and entirely likeable surfer-looking guy, who does a lot of cycle-touring with his partner.

I took winding B roads past that historic Goodrich Castle to English Bicknor, benefitting from a road closure that excluded cars but not bikes, and crossed the semi-dilapidated old footbridge over the Wye to Welsh Bicknor.

The steep steep road from the YHA hostel through the woods to the ridgetop brought me to Goodrich, and the castle I’d passed closely an hour before. I fancied visiting it until I saw how much entry cost – £16, more than I’d spent in total on campsite and beers yesterday. I think I invested my money wisely.

Soon after it was the long climb up the narrow ‘HGVs DO NOT FOLLOW SATNAV’ lane to Yat Rock, whose hilltop viewpoint has perhaps England’s most spectacular river view. The semi-panorama features the vast bend of the Wye, far below, as it careers between steep dark-green hillsides; on the other side the houses of Symonds Yat West stack up on their lush slopes like some exotic overseas foreign place, abroad, in a different country.

Up here you can readily see amazing keen-eyed hunters at work: bird spotters looking for peregrine falcons. The falcons can reach 200mph in a dive, though we only saw hovering kestrels, still complaining about being typecast in 1960s kitchen-sink film dramas.

The only crossing between the villages of Symonds Yat East and Symonds Yat West is an ancient hand-pulled chain ferry, the last remaining of the fifty that once saw regular use.

It was open but there was nobody about to take me across, but in any case I’d decided to stay on the east bank to ride the Peregrine Path, the old railway that’s now a waterside cycle route.

The stretch between here and Monmouth is delightful, flat, decently-surfaced (‘gravel’, of course) and right by the water, with yet another pedestrian bridge at Biblins.

Monouth was delightful too, especially because of the inexpensive and very tasty bacon roll from a local bakery in the historic pedestrian centre. I stopped by the 12th-century Monnow Bridge (over the Monnow, not the Wye) to ride across it and back, because I could, and because motor vehicles can’t.

Getting back to the Wye involved an exciting expedition trying to follow NCN423. The bike route is marked on maps but not signed on the ground. Or perhaps it is, but the signs are just hidden by undergrowth. Because – having squeezed bags and bike separately through a foot-wide gate – the ‘path’ plunged through waist-high nettles with a gap rarely more than six inches wide to an old railway bridge that consists entirely of speedbump-like corrugations. I was very happy to be back on nice nettle-free tarmac, A road notwithstanding.

At Redbrook I crossed the Wye again on yet another pedestrian bridge, this one bump- and nettle-free, and resisted the temptation to refresh at The Boat pub. I followed the Wye’s west bank instead, along the old railway line that’s a de facto decent bridleway through shady woods alongside the river. Soon after Whitebrook it was back on to the main road a few miles to Tintern Abbey, and over the Wireworks Bridge – a final pedestrian-only crossing of the Wye – to take the Wye Valley Greenway to Chepstow.

I rode the Wye Valley Greenway in spring, but the Tidenham Tunnel part of it was closed to let the resident bats get some sleep. This time however it was open, and I could ride through it.

Except I couldn’t, because a power cut had knocked out the lights. And signs warn you not to use your own lights because it will disturb any slumbering bats.

A mile-long walk through a pitch-black tunnel was not an attractive prospect, so I and a couple of walkers who were also going this way decided it was OK to use our own discreet flying-mammal-friendly illumination, and stroll through.

I was nearly there. The south end of the tunnel continues as a tarmac railtrail, which turns into a road down to Beachley, the barracks settlement on the end of the tongue of land between the Wye and Severn’s vast marshy confluence. I cycled under the Severn Bridge and round to the scrubby MoD land where the Wye finishes, just after the final Wye Bridge (which is a continuation of the Severn Bridge).

There’s not much to see at the end of the Wye, and I can see why the grazing cows showed more interest in their grass. But the trip was done, satisfyingly: a very enjoyable, scenic and pleasant journey from far-flung mid-Wales through lush winding valleys and past characterful towns and villages to this imposing end.

I headed back north a little, into Chepstow. I crossed the Wye one final on its fine old iron bridge on the edge of the old town, where Wales and England look across at each other in the shadow of Chepstow Castle’s ruins. There’s nothing in the way of ‘Welcome to Wales’ signs here. Perhaps, historically, Chepstow felt more part of England, and didn’t want to advertise political-geography technicalities.

I checked in to my hostel, and just perhaps the Wetherspoon. It had been an excellent trip, and I could celebrate.