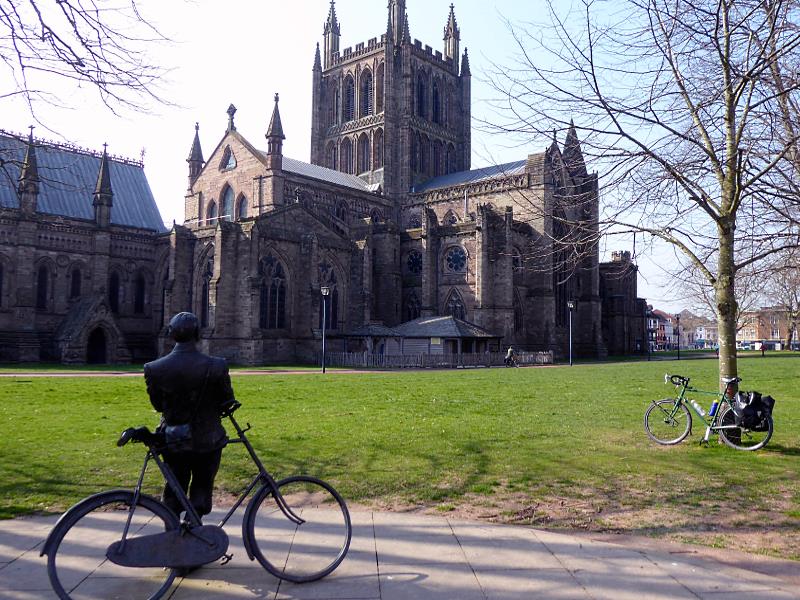 On 30 Jun 1921, Alfred Watkins made an astonishing discovery while out walking in Herefordshire. He realised that any two points of ancient, mystical significance – Stonehenge or Lord’s, say – were always connected by a straight line.

He called these ‘ley lines’, and detailed his insights in his classic 1925 book The Old Straight Track. I have a copy in my hand now, and I can’t put it down. Because my office is a mess. I must tidy it up and create some space.

OK, so I’ll admit it. As a scientific rationalist I think the ley lines thing is a load of cobblers, though that’s not to diss archaeologists, antiquarians, or romantic-past authors. Or indeed the uplifting and slightly spooky response we get from the psychogeography of ancient human modelling of the landscape.

It’s one of the reasons I love cycling so much: so I can experience the way humans have shaped our natural world since time immemorial. Particularly if I don’t have to meet too many of them as I do so.

Anyway, today I cherry-picked some of the best bits of another of Herefordshire’s rather splendid new cycle routes, the Watkins Way. Its hundred miles of landscapes, monuments and views that inspired Watkins don’t have to be driven: they make a fine two-day cycle ride, or (as I did) a nice one-day selection.

I started with the place that began the whole ley lines thing. On that historic day over a century ago, Alf’s revelation came at a crossroads where an old Roman Road (to Leominster and Risbury) intersects with the lanes to Humber and Stoke Prior.

The spot is marked by a commemorative stone put up by the Society of Ley Hunters in 2015, saying that right here Watkins ‘…saw the landscape anew and discovered the existence of leys’, but surprisingly not adding ‘…as confirmed by controlled, double-blind, randomised, peer-reviewed scientific trials’.

Watkins, an antiquarian rather than perhaps a scientist, must have had a strong imagination because there’s nothing remarkable to see here at all. That said, the site is now home to the peaceful Humber Memorial Woods, officially the ‘Best Natural Burial Ground in West Midlands’, an environmentally and psychologically satisfying notion that I’m all for.

Not for a while, though, I hope.

Anyway, I explored a few other points on the Watkins Trail, and recommend it, but once I’d got to Hereford later in the day, I was more interested in Edward Elgar. The great composer (1857–1934) lived in the town in the early 1900s, and was a keen cyclist, exploring the countryside on his 1902 Sunbeam Golden bike, and often composing things in his head as he did so (notably Dream of Gerontius, the Enigma Variations, and probably the Symphony No 1).

There’s a long-standing Elgar Trail following in his footsteps of course, which I’ve done and written about in the past. (I even contributed my own version of an Elgar cycling trail for the March 2021 issue of BBC Music magazine.)

So I spent a very happy afternoon riding in and around Hereford, channelling the spirit of Ted and his bike. I’d never been to Hereford before, and it’s a lovely place, with a handsome centre and a good permeability on two wheels (unlike, ahem, York).

The centrepiece is the magnificent Cathedral, and – for me – the superb statue of Elgar leaning against his bike. He contemplates the building in wonder. Or perhaps he’s working out how to modulate back to E flat in that tricky development section. Or maybe he’s just wondering if it’s too early to have a nice cool cider.

Hats off to sculptor Jemma Pearson for a masterpiece. Not only has she captured Ted himself perfectly – looking slim and fit, of course, being a cyclist – but she’s also nailed the bike, down to the spongy rod brakes, oilbath chaincase and Brooks saddle. Apparently Elgar’s Sunbeam weighed about 17kg, so about half of my touring bike when even slightly laden.

It’s not the only Elgar memorial in the town. I rode past his home from 1902 to 1911, Plas Gwyn, marked by a plaque. He wrote many major works here including his first two symphonies. It’s now four flats. Which is, of course, A flat.

Which is, of course, the key of his First Symphony. He’d have liked that.

After a leisurely trundle out to Woolhope (another ley-lines place) I came back by the railtrail from the southeast. This has another Elgar monument: the Sustrans-pattern silhouette that portrays many a celebrated local on their bike routes. Here’s Edward again, with bike of course, quite the Edwardian gent in his tweed suit and bowler. Typical MAMIT.

I was about done with ley-lines mysticism and music’s enigmatic power to move, so I returned happily to Hereford’s lovely town centre and my hotel for the night at the Green Dragon.

I wonder if Edward ever came here like I did to sample an excellent local steak, parking the bike in the same courtyard, and also lament the failure of England’s batting in a test match? Perhaps some things don’t change that much.