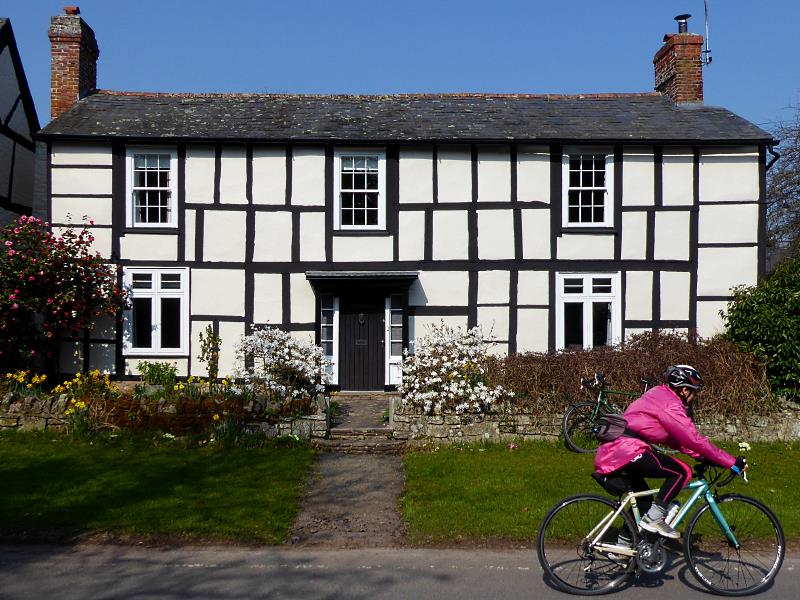 Herefordshire’s tourist people are pushing the county’s cycling trails, and it’s easy to see why, even when your eyesight is as bad as mine. Fans of everything from cider to ley-lines to classical music to picture-postcard villages have inviting routes to explore. (Three of those particularly appeal to me: perhaps you can guess which.)

The most recent of these is the new Black and White Villages Trail, which I did today. The 42-mile circuit starts and finishes in Leominster, which shares two important features with the other stopoffs on the trail. First, it has some delightful, historic b&w half-timbered buildings; second, the pronunciation isn’t obvious. (It’s ‘Lemster’.)

Conveniently for me, Leominster has a train station, so I could start ticking off my monochrome masterpieces right away in the form of the town’s Grange Court.

Built in 1633, it’s now a cafe and community centre in a pleasant park. It bears the inscription ‘LIKE COLLUMNES DO VPPROP THE FRABRIK OF A BWILDING SO NOBLE GENTRI DOO SVPPORT THE HONOR OF A KINGDOM’. Clearly nobody ran that past a sub-editor. Perhaps their descendants now work for the BBC news website.

I was also interested to see the Ducking Stool inside the nearby Church of St Peter and St Paul. It was the last one to be used in Britain, apparently. In 1809 it was used to dip one Jenny Pipes as a punishment for using foul language. It clearly didn’t do the trick, because Ms Pipes was still chuntering obscenities afterwards. Some people would see her as an anti-social outcast. My mum would see her as a role model.

The B&W Trail is flat, friendly, and very quiet: I saw barely a handful of cars all day on the narrow back lanes. Eardisland (‘Urdzland’) is arguably the most picturesque B&W village of the lot, with some picturesque streamfront cottages that looked lovely this spring morning. It also claims to have the oldest AA box in the country, outside the pub.

In the olden days, AA patrolmen would come out by bike to give motorists roadside mechanical assistance, because it was faster and more reliable than driving. Any drivers stuck in a motorway jam today might think things have come full circle.

At Pembridge there’s a fetching market hall in front of the pub; a century-old Austin 7 was parked there, with a note painted on its radiator stating it had driven from Peking to Paris in 2011. It’s annoying when you have to drive a long way to find a park.

Having just created a Yorkshire Whisky Trail for a magazine, I was keen to sample some of Herefordshire’s other engaging cycle routes, the Cider Circuits. These run picturesquely round the county’s orchards and cider mills.

So, after pleasant Pembridge, I stopped for refreshment at Dunkerton Cider Barn, which has lubricated passing cyclists for over 400 years.

I enjoyed a lovely pint of their in-house brew, Dunkerton Craft Organic Cider: 5%, soft and creamy, with the gentle apple flavours of a baked tart rather than the pungency of, say, Scrumpy Jack.

Showing considerable restraint, I left it at one pint: I had some more cycling to enjoy, so it was back to the B&W Villages route.

The quaint black and white houses kept coming, one of the most covetable being on a green at a junction. The lass who lived there was sitting at her laptop outside with sunglasses on and a cool drink to hand. She turned out to be a keen mountain biker, and we talked cycling. Both of us were hard at work, then. Research, you see.

Weobley was promised to be one of the most striking b&w villages, and it didn’t disappoint. I was tempted by the thought of a pint of Weobley beer, brewed in the garden shed of the bike-friendly Jules bistro, but wanted to keep my cycling momentum, so bought a bottle of it for later on from the shop next door.

More easy, untrafficked lanes got me to my rather fab self-catering accomm at Wall End Farm just outside Leominster, where I enjoyed that bottle of Weobley. That’s not ‘Weebly’ or ‘Wobbly’, by the way, but ‘Webbly’.

The Black & White Villages Trail is a lovely day-ride jaunt: the pleasant, mostly flat and almost empty lanes mean it’s suitable for anyone, and I was delighted to discover a part of England I’d never explored before. People all seemed friendly and ready to chat, and there are plenty of refreshment opportunities en route with, literally, a strong local flavour.

Advice for cyclists: Take two water bottles, especially if the weather is as glorious as on my trip. Then you can put local cider in one, and local beer in the other.

e2e.bike > Other > Route research > Herefordshire 1: Here in black and white