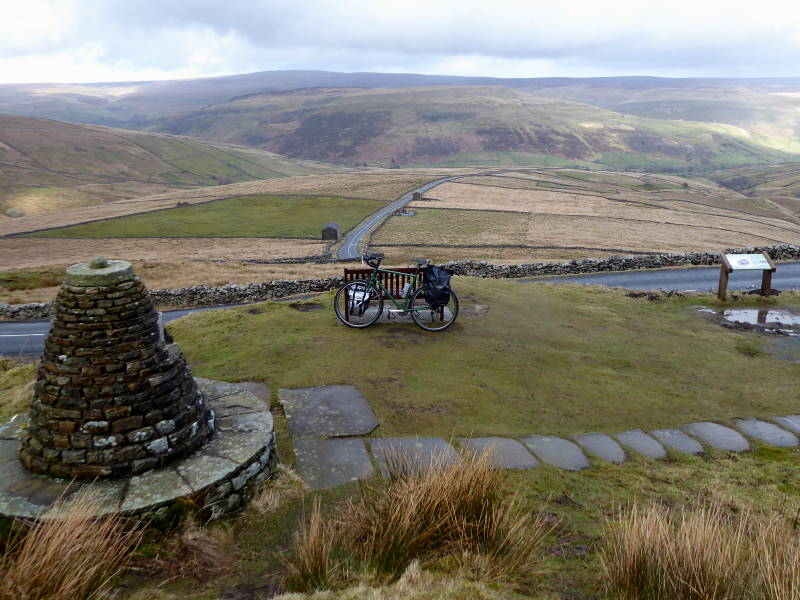 A day of headwinds and three hours of rain. I should have expected that from the BBC weather forecast. Because that had told me it would be breezy and sunny with a brief shower.

But I did the research I needed to, though the challenging weather did put me through my paces. Paces up Buttertubs, for instance, pushing my laden bike up a 1 in 4 into a fierce wind.

The morning was a lovely, quiet ride from Ribblehead to Hawes, where I dropped in on the Wensleydale Creamery’s cheese factory to continue my occasional series of Eating Cheese In The Place Itself (see also Stilton, Cheddar etc).

Then I headed to Semerwater, Yorkshire’s third largest, but largest swimmable, lake. I came here last year in warmer circumstances; today it was more furious, with choppy waves. A guide taking a youth group canoeing assured me this was the spot where locals go for a dip. I did some paddling to assess, with inconclusive results.

I vaulted over from Wensleydale to Swaledale on the road northwest from Askrigg. Buttertubs Pass gets the column inches, but this is better: more buttery, tubbier, as it jinks through the hillocks at the top. It was devoid of all traffic, unlike the much-vaunted BP; I had the dramatic road to myself, and revelled in the rollercoaster hurtle down the other side, sometimes briefly leaving the road after a particularly humpy crest, as if on a pump track.

But it was throwing it down. I sheltered for a time with a coffee in the art gallery in Muker. A local bloke hailed me to make some weak cycling joke – one of several instances today.

You’re seen as fair game for buttonholing if you’re on a bike in Yorkshire. This usually consists of them saying something like, ‘Bit wet for cycling, eh! I said, bit wet for cycling, eh! Wet! For cycling! A bit! In’t it! Eh!’, while they’re warm and dry inside a car and you’re standing politely in the drizzle, before a twenty-minute monologue about their puncture in Wakefield in 1963.

Anyway, I got to Wainwatch Force above Keld, a splendid-looking and bike-accessible falls that features in many Top Ten Wild Swims lists. I ruled out the nearby Kisdon Falls, as it’s a long pushy along a muddy footpath. Then it was the long slog up and over Buttertubs, with that horrible combination of headwind, heavy bike, and 1 in 4 climb. I pushed, of course.

There was one last swim spot to investigate, outside Hawes, and it was another cracker – again, scenic, easily reached with bike, but far too cold for an actual dip today.

You’ll have to wait for the article in Cycling Plus to find out where, but here’s a clue: cotterless cranks wouldn’t be appropriate here.

I had an hour to wait for my train at Garsdale station – just enough to have a quick pint at the nearby, friendly, Moorcock Inn.

Well, I had to, really. They had Semer Water ale on draught. After my Wensleydale-in-Wensleydale experience earlier in the day, this was the nearest I’d get to Semerwater-in-Semerwater…