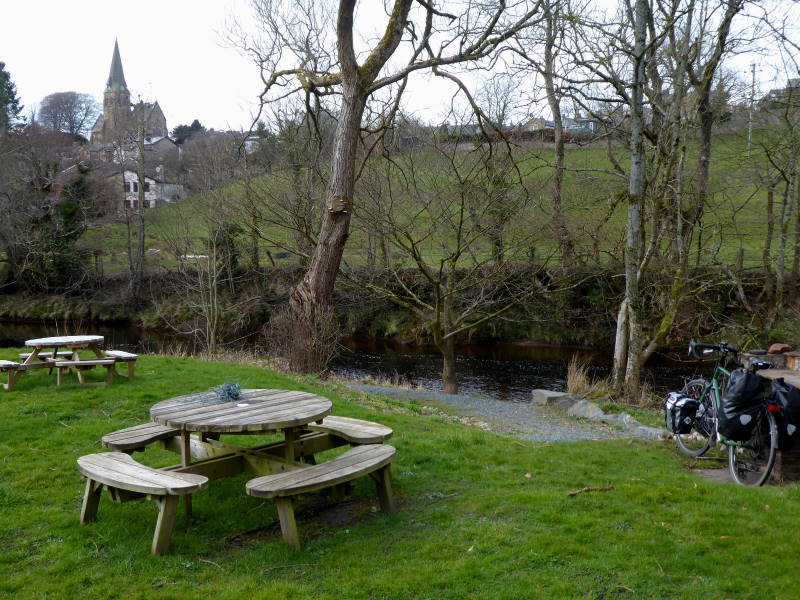 I’m very keen on wild swimming, so long as I don’t have to enter any water to do so. Anyway, that said, I’m doing a recce of my next route for a magazine article, on wild swims.

The idea is to come up with a route that’s not only a very good ride of one long day, or two short; but one that also gives you a variety of outdoor dip experiences, from falls to river to lake to sea. One that you can do right off the bike – no locking it up and walking two miles up a footpath, only to realise you left your flask in the panniers and your towel in the hostel.

It’s all fairly familiar to me in cycling terms – the western bits of the Way of the Roses, Ingleton, Wensleydale, Swaledale – but not the aquatic stuff. So this trip won’t involve anything wetter than paddling – the research is mainly checking things like bike parking, ease of access and so on.

Morecambe’s beach resort always puts a smile on my face, partly because of the statue celebrating the town’s most famous son, Eric Morecambe.

The prom cycle path is a cracker too, wide and smooth and much enjoyed by locals and visitors. And it provides convenient access to the beach for the seaside-bathing element of my route. With a fresh breeze and temperatures barely above nil, though, I was glad to keep my clothes on. The passers-by were probably grateful for that, too.

I headed along the railtrail to Lancaster, where I found one of the worst pieces of parking I’ve ever seen. My Twitter post on this turned mildly viral, with some respondents suggesting the vehicle may have rolled, handbrake left inadvertently off, down from a legitimate space the car park behind, then rolled back to rest against the kerb.

This is possible. On the other hand, having wearily seen and photographed over the years dozens of examples of worse, deliberate parking on cycle paths, I think it’s just as likely to be sheer car-driver entitled cyclephobic arrogance. The jury’s still out, and trying to find a way round.

After the Crook, whose picnic site gives splendid views over the valley, the Way of the Roses takes a narrow lane that goes up to the ridge, giving even more splendid views.

The sawn-off summit of Ingleborough looms large – I seemed to spend half the day riding towards it but never getting nearer. In its shadow was the ruggedly handsome village of Burton in Lonsdale, where I suspected there might be a small wild swim spot unrecorded on the internet. Hmm, maybe there’s a reason the internet ignores it, though.

I’d been less careful at Wennington half an hour previously, though. I’d wanted a close look at the river under the bridge to see if it was wild-swimmable. I got too close a look, slipping on the frictionless algae-lubricated stones, and sliding into the waters up to my knees. Well, those green patches now adorning my blue trousers look quite dashing, I think.

At Ingleton I checked out the outdoor pool – not quite as scenic as Hathersage’s, I think (and closed until summer) but worth mentioning in the article. I also, after exploring some excitingly remote lanes and tracks, ruled out including Thornton Falls in my route. Though often appearing in Top Ten Swims lists, it’s only accessible by bike along a rough track. Worse, being on private land and on the Ingleton Falls Walking Trail, you’d be rushed six quid if the wardens spot you. Worse still, it seems swimming is discouraged as well.

I stayed at Broadrake Bunkbarn, a terrific place at the foot of Whernside, near Ribblehead’s famous railway viaduct. It’s modern, spacious, comfy and new, with a well-appointed kitchen-dining-social area upstairs. (And fast wifi, too.) The sheep (biddable, good-natured Herdwicks) behaved in a way I’m familiar with from most people: ignoring me at first, then looking quizzically at me half-expecting something to their advantage, then ignoring me for good this time.

If I ever have a birthday again, I’ll hire it for a weekend and invite all my friends for a fine old time of walking, cycling, visiting teashops and generally having fun.

It can sleep 20, so I might need to ask a dozen strangers to make up the numbers.