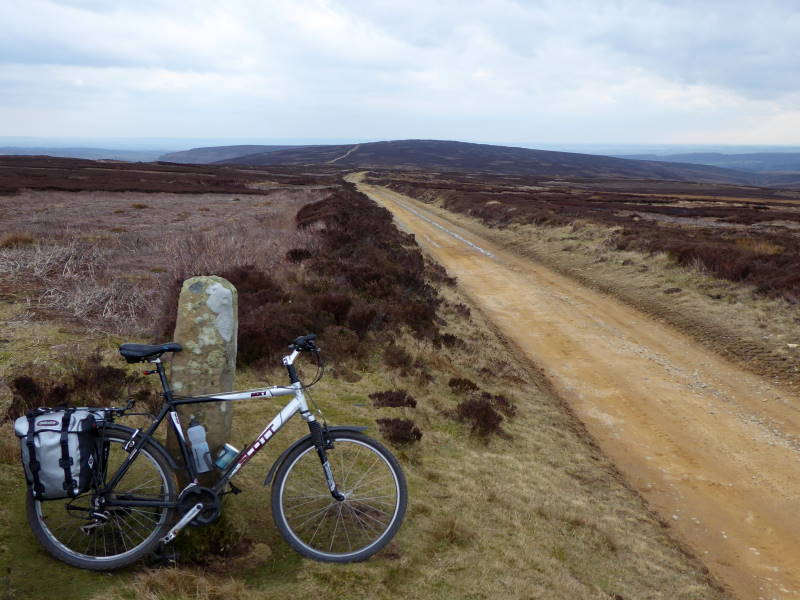 Yorkshire’s most remote hamlet? Cockayne’s few houses, farms and church sit at the head of Bransdale, in the North York Moors. It’s at the end of two parallel narrow lanes up the valley, and not on the way to anywhere. The only road exit is back down the same valley.

Cockayne’s nearest shop is ten miles away, in Kirkbymoorside, or twelve miles away in Helmsley. If you’re staying at the National Trust holiday cottage here, keep your fridge and wine rack well stocked. You don’t want to be running out.

Anyway, that’s where I cycled today, north from my house in York, just to see how remote it really is.

My ride was flat until Crayke, but once the North York Moors had reared up behind Ampleforth, it certainly wasn’t. I prepared for the coming climbs in the best way I know how: I had a sandwich and a biscuit.

I had a brief look round the vast complex of Ampleforth College, a well-regarded school (certainly well-regarded by accountants: it’s £38k a year for boarders) run by the robed monks of its Benedictine Abbey. The school aims to give not only a good education, but a ‘spiritual compass for life’. My spiritual compass clearly isn’t working, because it keeps leading me round in circles.

And my morals and ethics swiftly proved questionable. I entered the grounds of Duncombe Hall, outside Helmsley, via the grand gates at Sproxton, only to find at the bottom – once I’d vaulted a locked gate – that I’d unwittingly come down a private track. Perhaps I should be more like those Tory MPs, for whom the definition of a gentleman is someone who never breaks the law unintentionally.

Anyway, I admired the manor house itself, and the view of the castle, as I rolled into the pleasant market town centre.

Helmsley is a gateway town to the Moors, and every other shop seemed to be a coffee shop, which suited me. I lunched in the square next to a group of motorbikers who talked incessantly about roads. Pah, honestly! That would be like a group of cyclists talking incessantly about bike routes… oh.

So, north of Helmsley was where the fun really started. A steady climb up a narrow lane took me through Carlton to Cowhouse Bank, where the Moors got into their swing, or rather, seesaws and slides. The lane clambered up to the moortop, tarmac smooth as a daytime TV host but not as shallow, with fine ridgetop views down on both sides.

The village of Cockayne is at the end, at the top of the valley, mostly owned by the National Trust. There’s nothing really to see except for the delightful little church, which obligingly provides tea, coffee and snacks for a donation. As the nearest cafe was ten miles of headwind away, I was happy about that.

Outside the church was also the grandest display of snowdrops I’ve ever seen. It felt like spring was just round the corner. What was actually round the corner, though, was that National Trust holiday cottage: £2,500 for a week in summer, if you’re wondering.

Cars can only return south, but I was on a bike, and could continue north – once I’d hauled it up a steep and rough track to join Rudland Rigg.

This ancient track goes almost the length of the Moors north-south; it’s one of my favourite offroad bike rides, and I blogged about it a while back. It was an utter delight to be up there on the ridgetop, views all around, the wind behind me, and the scenery all to myself.

I came down from the Rigg at Bloworth Crossing, northwest along an old mineral railway. At Ingleby Top starts one of the most remarkable railtrails in the country, plummeting down for a kilometre at a steady 20%. Yes, wagons actually did use this vertiginous track in the 19th century, though then it was only five-eighths of a mile at 1 in 5, so that probably wasn’t as bad.

The trick was that full wagons at the top, packed with iron ore from the mines up there, could be let down Ingleby Incline gradually by cable. Their downward momentum hauled empty wagons, attached via those cables, back up. Once at the bottom and on the flat, the ore could be carted by normal trains to Middlesbrough’s factories to make steel. Maybe even bikes.

I took things carefully down the gravel slope, pleased I’d tweaked my brakes for maximum grip that morning. If Yorkshire ever wants to host the Winter Olympics, this could be the place for a ski jump.

I waited for my train from Battersby station – an oddity in that the trains have to switch direction, even though it’s not a terminus – with a couple of pints in Ingleby Greenhow’s friendly pub.

It had been a wonderful day’s riding. I quite like Cockayne, but don’t get me wrong: I won’t make a habit of it. The North York Moors generally, on the other hand…