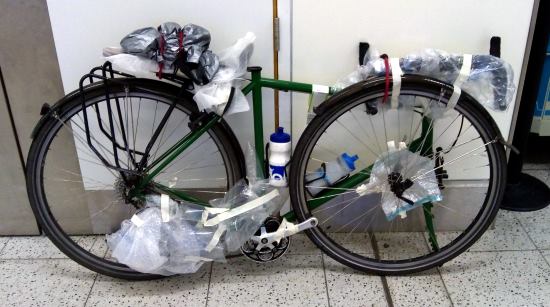 Taking bikes on planes is not straightforward. It involves some very cumbersome and detailed disassembly (pic), and a similar amount of reassembly afterwards – far more than people generally think, and with the distinct possibility of serious loss and damage during the process. Once again, Brexit comes to mind.

Anyway, to ensure plenty of bike-dismantling time at Gatwick, I’d stayed overnight in Central London YHA, where I was possibly the only native English speaker in the building. The same applied to the 12-carriage train from London Bridge to the airport, though that was because I seemed to be the only person on it.
I arrived at Gatwick with four hours before check-in. Just as well, given the hour-long conversation I endured from a friendly but talkative bloke curious at my bike mechanics, who insisted on telling me all about Thailand, modern H&S regulations, young people today and Brexit. 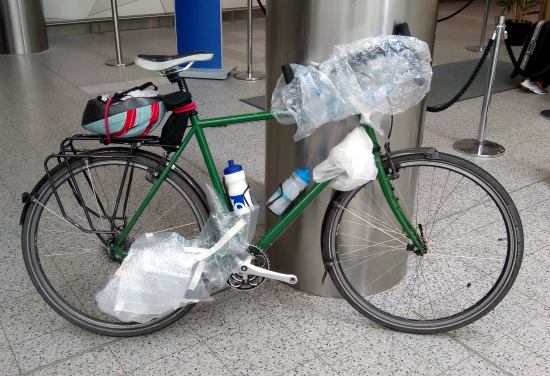 It got worse. My first effort at preparing the bike for bagging (pic) – derailleur unfastened and swaddled in padding, handlebars turned sideways, pedals removed – was deemed unsatisfactory by the scanning man. The bike wouldn’t fit in the machine. He kept telling me I should have brought a rigid box, seemingly incomprehending of the practical difficulties of (a) getting to the airport by bike and then (b) touring with a box the size of a bike actually on the bike.
So it was a second round of surgery, this time a little scary: front wheel off, mudguard removed, seatpost taken out – the version of the bike you see at the top of this page. It now fitted into the machine, and I waved it off into the twilight world of baggage handling with some trepidation. 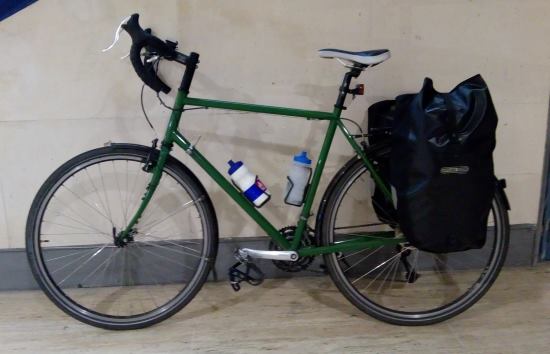 Well, it wasn’t too bad. The flight was a tad bumpy, though no bumpier than the average NCN route, and after an hour or so’s grimy mechanicals in Seville airport, the bike was back to its old self (pic), and I could breathe easy.
I even managed to have my first conversation in Spanish, with a couple of curious local cyclists who admired my gear ratios. The only damage sustained was to the wheel magnet for the bike computer, which doesn’t now work, so I’ll be relying on dead reckoning, or at least Nigel, to keep me informed on distances and speeds this trip. (I’ll simply text Nigel en route to ask him his figures, and multiply both by three-quarters.) 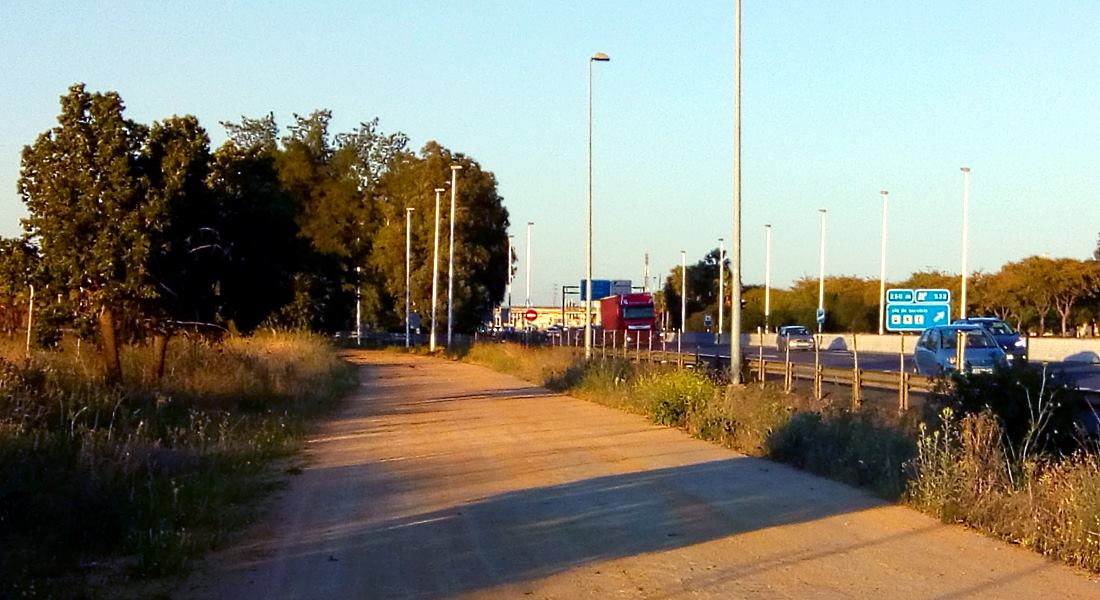 From Seville airport a dirt track runs alongside the motorway for a couple of miles (pic) to the edge of town, from where a really good network of segregated cycleways runs right to the historic centre. 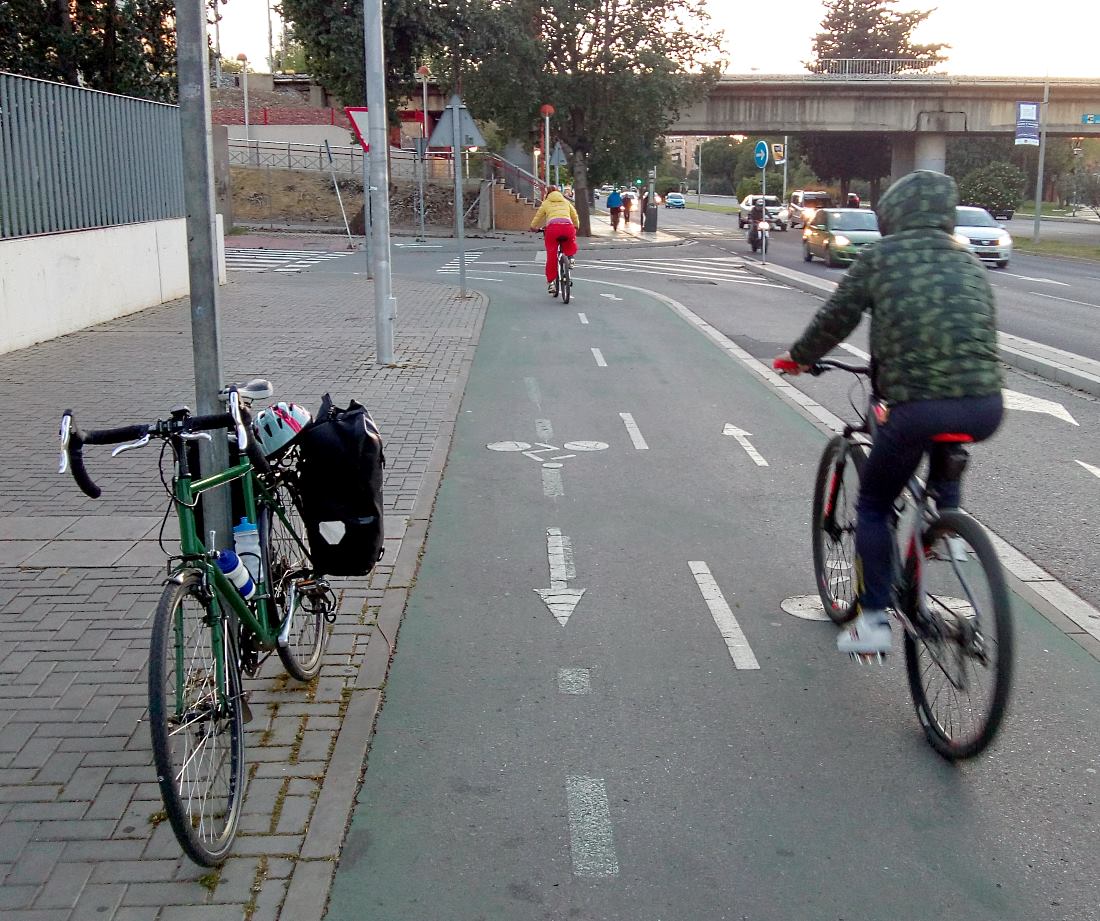 Once on the cycleway network (pic) it was a delight. This is a fabulous way to enter the city, going through the industrial outskirts with its car showrooms and DIY warehouses, through the social-housing suburbs with groups of African guys and locals sitting outside drinking and dancing to ghetto blasters, through the lively student areas with their crammed and lively pavement cafes, through the parks, through the upmarket central areas… 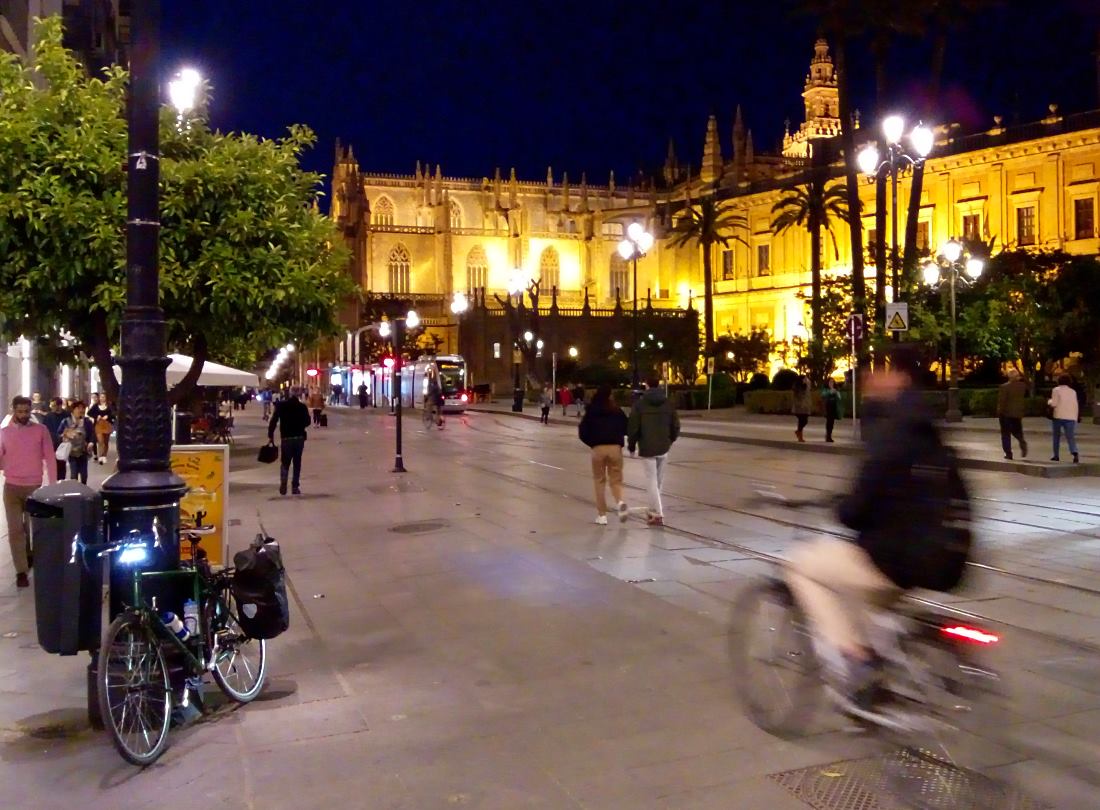 …and finally, thrillingly, into the old town (pic), the Alcazar and the Cathedral, lit in buttery splendour against a dark blue cloudless sky above the car-free ped’n’bike plazas.

The winding cobbled lanes were full of pavement restaurants and tapas bars, buzzing with the chat of happy tourists. But I was whacked, having spent more time wielding bike tools today than I usually do in three months, and clambered gratefully into my hostel bunk.