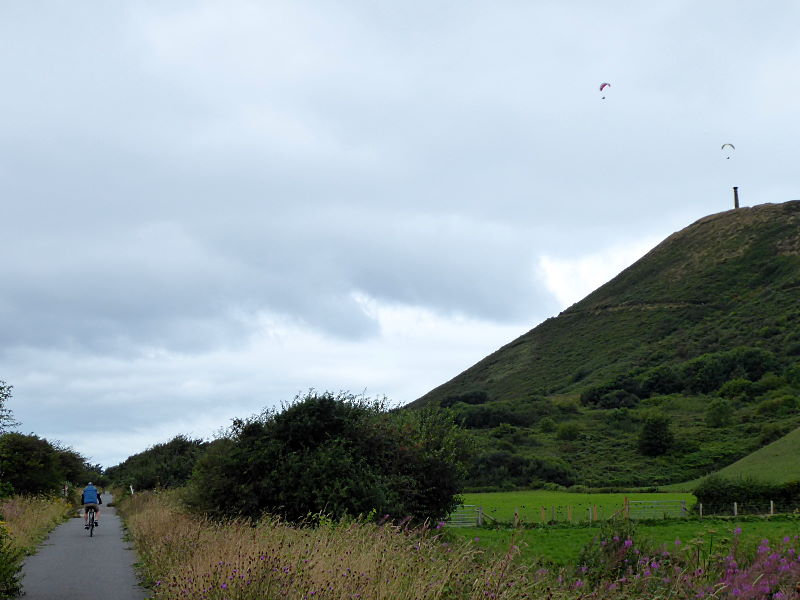 I was in Aberystwyth for a photoshoot, so came a day early, intent on a ride in the hills. However, my plans to ride a circuit involving Nant-y-Moch Reservoirs was foiled by a road closure – the viaduct was completely out of action – and my backup plan of investigating a cycle cafe was also stymied: it hadn’t reopened after lockdown. That’s the last time I trust Google’s opening hours…

Anyway, I did get a bike ride of sorts in, along some of the Ystwyth Trail, NCN81. It runs east-west along the Ystwyth valley between Aberystwyth and Tregaron and, ultimately, the rest of the world, which can feel a long way away when you’re in mid-Wales, in a good sense.

The start, just outside Aberystwyth, is splendid, giving wide views of the steep hills, valley floor and sea, and the first couple of miles are smoothly asphalted.

After some malarkey with gates and bridleways it settles in to being an unsurfaced track alongside the Ystwyth for several miles, but I soon got fed up of sliming along the view-free mud, enclosed by trees. I came back into Aberystwyth on the road, which at least gave me some scenery to look at.

Back in Aberystwyth, a surprise at Wetherspoons in the old station, where I dropped in for a pint and a burger. You’re not allowed to eat outside at the front, but have to go round the back and sit in a netted-off area at the back. It’s like being in an aviary. Why? Some obscure historical Welsh by-law?

Ah, no: it’s the seagulls. Out the front they’ll molest you and have your chips. Round the back they can’t get in to your netted enclosure. It’s an aviary of sorts, but a reverse aviary: to keep birds out, not in.