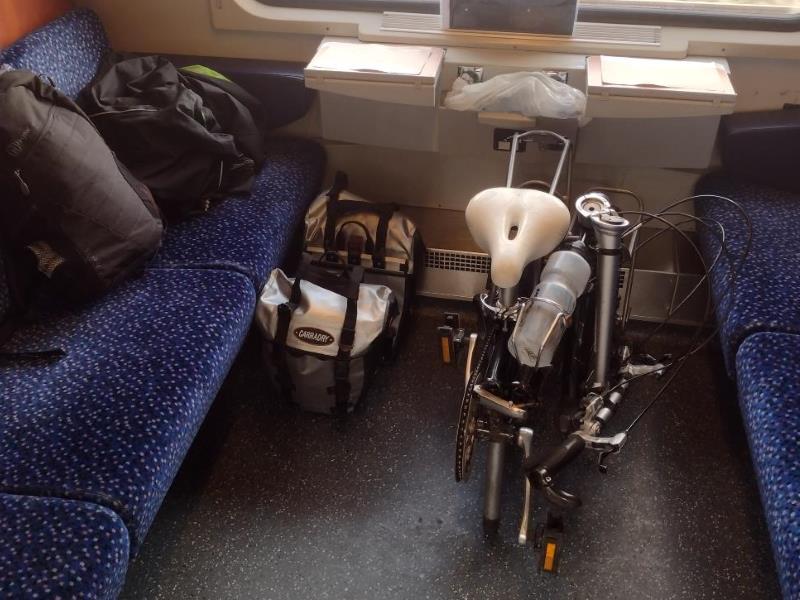 After three years of itchy feet and cooling my heels – pandemic restrictions have been bad for mental health, but also podiatry – I’m doing another international End to End at last. This one’s Slovakia, a country I’ve been through briefly a few times and liked, so I’m back to do it properly. Which, for me, means from one end to the other, on a bike.

Getting a bicycle from Britain to mainland Europe is surprisingly difficult. Planes require the bike to be dismantled and bagged, as if sending it off for recycling; after the baggage-hurlers have been at it, that may be all it’s good for. Ferry ports are often inconveniently sited, at the coast for example. Eurostar takes bikes, but in the same way the UK takes Ukrainian refugees: hardly any, and at huge bureaucratic price.

So for this trip I’m taking my folding tourer: my Dahon Speed TR. It’s a chimeric, strange beast, but my first few trips since I bought it third-hand three years ago have been cautiously promising. It’s just about comfy enough a ride to withstand a forty- or fifty-mile day fully loaded, but it also just about folds up enough small enough to fit into Eurostar’s scanner – thus enabling it to travel as regular baggage.

Getting to Slovakia no problem, then: Eurostar from St Pancras to Amsterdam, then Nightjet train from Amsterdam to Vienna, a short hop from the border. Cheap, too: £35 and £25 respectively, booked six hopeful months in advance.

Checking in was not the breeze I’ve had in the past on Eurostar. For whatever reason, the check-in queue took an hour of mazy shuffling – tedious and sweaty work when you’re toting a heavy folded bike. But the bike cleared its way through the scanner no problem, just, and on board the train it fitted snugly into the luggage space, just, and I could relax for the pleasant and smooth journey over to this place called Europe.

In the course of bagging the bike in St Pancras I had somehow flipped the bulb out of my hub dynamo light, and it didn’t now work. I hate dynamos anyway – cumbersome expensive extra stuff to maintain that can, and clearly had, gone wrong, why not use cheap and efficient LED lights? – and I wasn’t planning on any night riding, but I needed an emergency light.

So I used my stopover in Amsterdam to find a branch of HEMA – an easy scouting task thanks to the reasonably stress-free cycle path network – and get a set of last-resort LEDs for €3.

On the overnight train from Amsterdam to Vienna there was a problem. My bike wouldn’t go on the overhead rack – strangely, the only luggage space at all. Clearly, six adults and a bike would not fit into one compartment.

Fortunately, one carriage was out of use because an electrics failure had killed the lights and heating. So the ticket inspector let my bike have a compartment all to itself, happy in the dark chill.