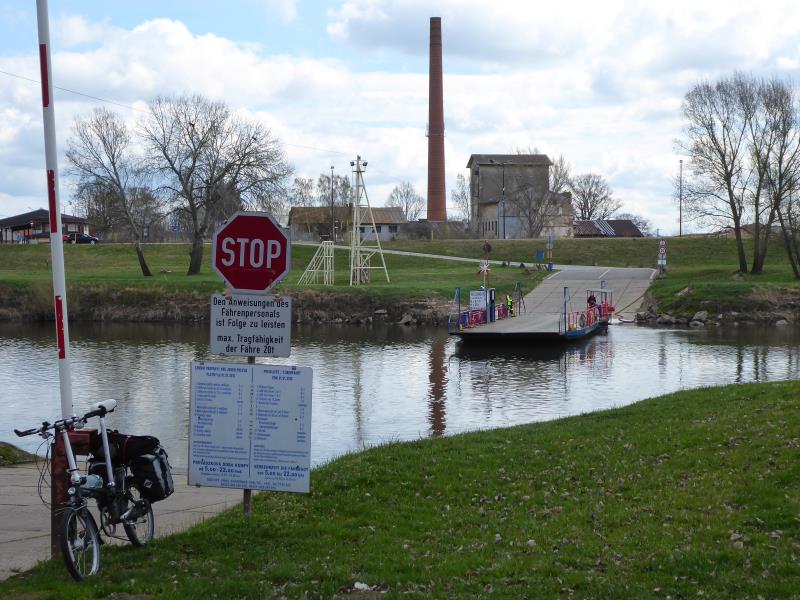 After a bleary night of interrupted dozes on the long train from Amsterdam to Vienna, and a local morning train from Vienna to the village of Angern an der March, it was time to start cycling at last. Angern sits on the March/Morava river, the border between Austria and Slovakia. This was the old Iron Curtain between East and West; I grew up with this mysterious line defining the edge of the known world.

And right opposite Angern, just a hundred metres or so across this enticingly swimmable-looking river, is Záhorská Ves, the westernmost edge of Slovakia.

A little platform ferry, restored in 1999, shuttles pedestrians, cyclists and up to half-a-dozen cars at a time. It cost me €1, and the bike went free; not bad for admission to a new country, and a new End to End.

Záhorská Ves is a modest little village with the odd bar, restaurant, station, memorial and so on, and – to judge by the village sign – an exciting historical incident involving a jug of milk being used to put out a blazing church roof.

I stopped at a bar for a fizzy water and lavatory visit. Three locals were bantering good-humouredly with the hostess over their beers.

It was sunny and warm, and the road was flat and went through some pleasant-ish if still-wintry woods.

But I was knackered after 48 hours of tedious train travel since leaving home. I’d booked myself into a hotel in the town of Malacky, just a dozen miles up the road. I gratefully schlooped an ice cream in the sunshine along with sunglasses-wearing locals.

Once checked in, I wasn’t good for much. A cheap beer at a local bar (€1.50 for Budweiser, the Czech not US version of course). A cheap and wholesome in-room picnic tea from Lidl, whose layout and products were identical to my branch at home in York. A bath. And a much, much needed early night.