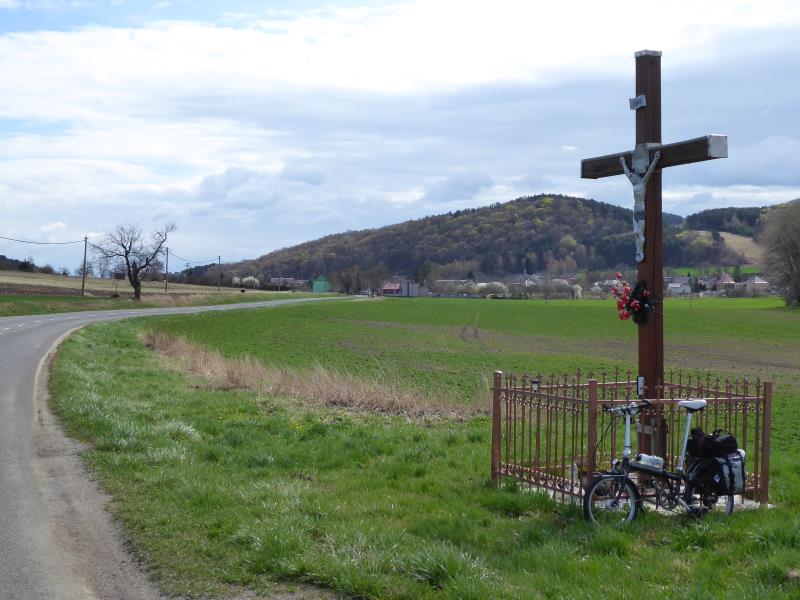 An easy, pleasant day across largely flat rural landscapes to Trnava, the ‘Slovak Rome’ (because of its churches, not pasta restaurants). It was a succession of characteristic Slovakian views: green woods; farms; quiet villages; cement factories. And Tescos.

I left Malacky through the deserted parkland round the currently unoccupied Pálffy Mansion, former seat of the town’s bigwigs, and felt a tingle of excitement at being on the road again.

Better than the tingle yesterday that had forced me to make an emergency toilet stop at the bar in Záhorská Ves. When I said I wanted to ‘get going’…

Anyway, no such problems today, despite the busyish main roads and stream of lorries, no doubt ferrying vital cement or Taste the Difference vegetables.

In the villages there was always a shabby old man on a cheap, unsuitable bike plodding along in front of the church, and sometimes it was me.

On the roads in between I was the only thing on two wheels, though, and had to hold my nerve occasionally when those lorries passed close. However – like the often rocky, broken road surfaces – it was no worse than I’ve managed to withstand for the last fifty years in Britain.

The best scenery of the day came as I crossed over a low part of the Little Carpathians on a back road that went through Bukova. I passed a signpost pointing out a clutch of cycle routes, including one invitingly wine-based. However, through the day I saw fewer cycle tourists or road riders than signs.

The short mileage and favourable winds meant I got to Trnava by lunchtime, which suited me fine. It has a fine historic centre with some lavishly wide, explorable pedestrian streets.

In one of them I enjoyed an exotic foreign-cuisine special, so specific to that culture that they advertised it in the foreign language itself. It was called ‘Fish and Chips’. (And it was very good. Big chunky sausage-shaped fillets of some rich white fish, not the flatter fillets I’m used to.)

I washed it down with a Czech beer. Make sure you take your Pils, dear. If you forget you mustn’t try to make up by having two lots the next day.

There are a few helpful segregrated bike lanes in Trnava centre, and some have clearly been modelled on Britain, because they had signposts or telegraph poles in the middle of them.

Trnava is one of the country’s four big car-making towns: here they make the Peugeot 208 and Citroën C3, whatever they are. I don’t care, just so long as they give me plenty of space when passing.

In fact, thanks to those four mighty factories, Slovakia produces the most cars per head in the world. Hmm. Maybe not quite so green a country as I’d thought.

I got my rather luxurious business hotel – nothing cheaper was available on booking.com – just as it started to rain.