I’d never been to Ilkley. Or Otley. Or Ilkley Moor, with or without a hat. So today I did something about it, cycling up and over Yorkshire’s most famous tract of upland: the windswept plateau which gave birth to its ‘national anthem’, On Ilkla Moor baht’ at.

I took the morning commuter train from York to Leeds. It was jam-packed with smartly dressed people going to office jobs, and would have felt like a London rush hour, if it hadn’t been for the Northern Railways rolling stock: fairly tatty, thirty years old, working but creaking old toilets, upholstery half-worn out, it was clearly much better than Southern Rail.

I headed west along the Leeds-Liverpool canal towpath, from just by the station, heading salmon-like against the downstream of commuter cyclists (pic).

From here, in principle, you can cycle all 125 miles to Liverpool city centre along the canal, a journey full of surprises. Such as how dull and unpleasant much of it is, how 30 miles on a flat but bumpy towpath is as tiring as 60 miles on a hilly but smooth road, and how accurately feral urban teenagers can throw stones at you. 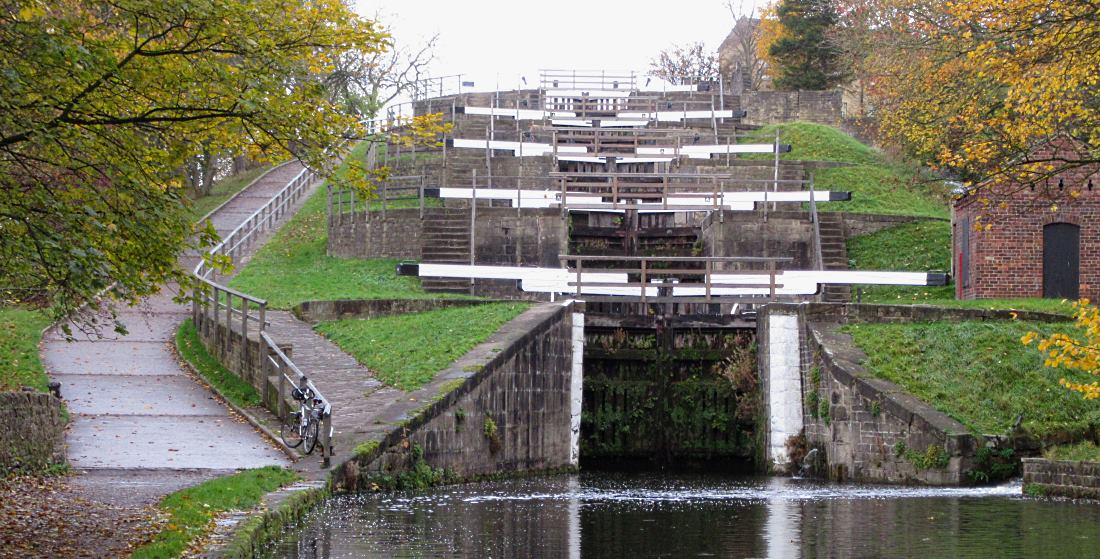 But I wasn’t heading that far. I was only heading the 15 or so mostly well-surfaced miles via Saltaire to Bingley, famous for its Five Rise Locks (pic). With a gradient of 20%, this is perhaps the steepest stretch of canal towpath in the world. (Though I’ve never cycled the Three Gorges Dam locks in China, as I’m dubious about the availability of real ale in Hubei province.) 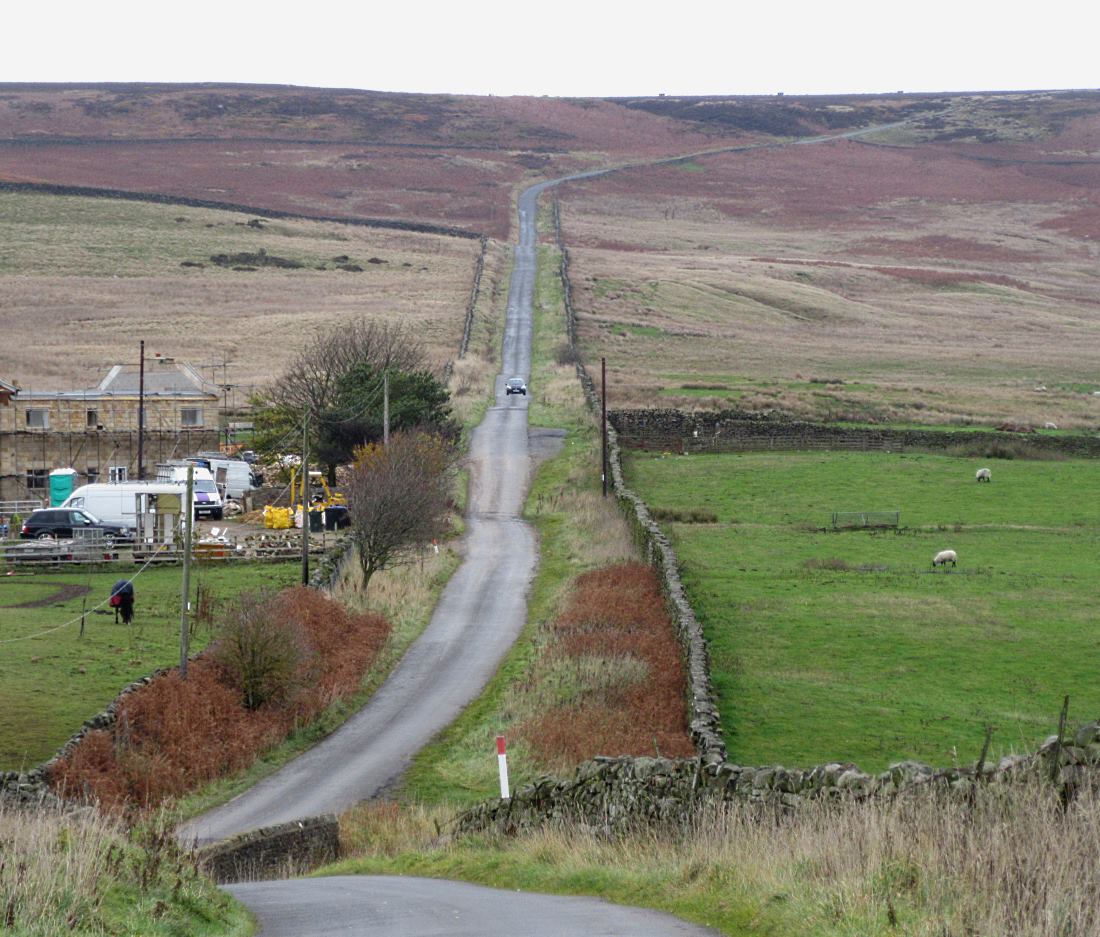 But I turned north off the canal just after, up some thrilling back lanes (pic) heading from Airedale to Wharfedale over Ilkley Moor. There were sweeping, majestic views of the surrounding moors and valley towns, and of the unforecast rain clouds heading our way. 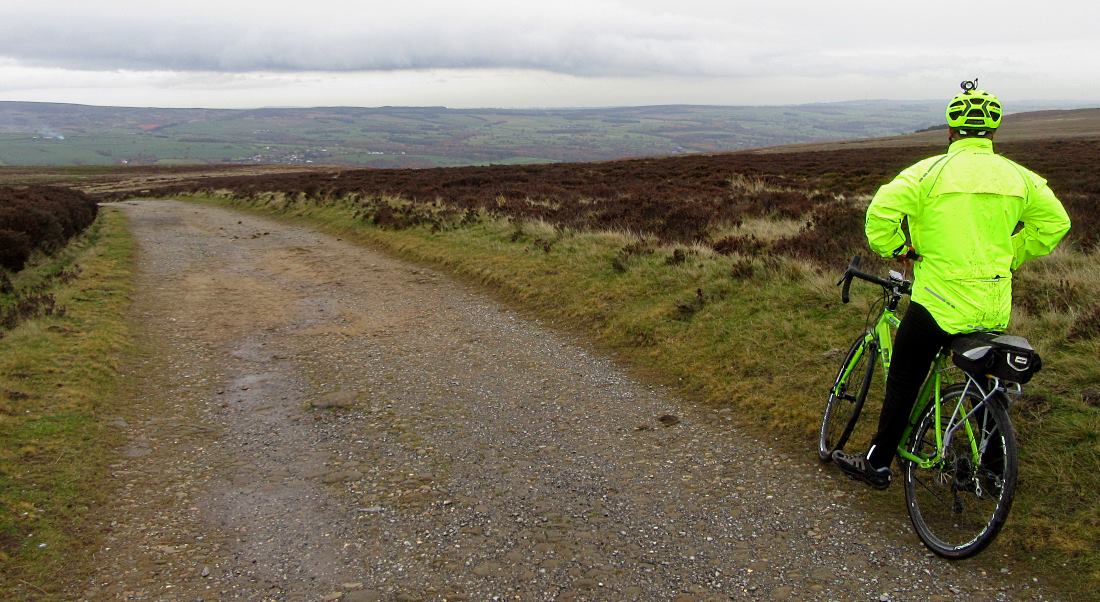 Evidently the council ran out of tarmac by the radio mast at the top of the moor. For about a mile the old road between Keighley and Ilkley is a moderately bumpy track, easy on my front-suspension trekking bike but unpleasant for a road bike. I now had company (pic): Roger, another cyclist from York who by coincidence was doing a similar day-ride loop to me. It turned out we had plenty in common to chat about, such as a fascination with Spurn Point, which is where I want my ashes spread, though not yet.

The general area here is called Rombald’s Moor; Ilkley Moor is only the north-facing slopes, extending from about here (pic) down to Ilkley itself, along a welcome return of tarmac. But it’s here, yes here, that – according to folklore – a day-tripping Halifax choir came in the mid-1800s and improvised a comic song called On Ilkla Moor baht ‘at over the melody of a traditional hymn. It’s become Yorkshire’s signature tune, and if the historic county ever became a country in its own right, it would be the anthem played when its athletes queued up to receive their Olympic medals.

The words tell the tale of a young man courting his sweetheart up on the Moor, but – it is strongly implied – he dies from a cold contracted as a result of his being bare-headed. Baht ‘at means ‘without a hat’: baht is a dialect word originating from Old English be-utan, ‘without’, a word which evolved into the Modern English word but, followed by characteristic West Yorkshire dialect article-dropping and omission of initial aspirates.

But there are serious shortcomings with the narrative. First, there is NO medical evidence to link lack of headgear with coryza, the common cold. It’s a virus, whose transmission is not temperature-related. Having wet hair or being hatless is not a factor. Second, a cold is not fatal per se (though complications can prove deadly of course). On Ilkla Moor baht ‘at therefore has NO scientific basis, and should NOT be used to guide your wardrobe choices for future hilltop trysts. The song as sung is, I’m afraid, classic victim-blaming.

Furthermore, the tune requisitioned by those mischievous Halifax songsters, Cranbrook, has been forever tainted. How can you now sing While shepherds watched to this, its traditional setting, for example, without the entire congregation falling about laughing? No wonder that Cranbrook has fallen completely out of favour for sacred use, except in some remote and primitive parts of the English-speaking religious sphere where they know little of the world outside, such as the US. 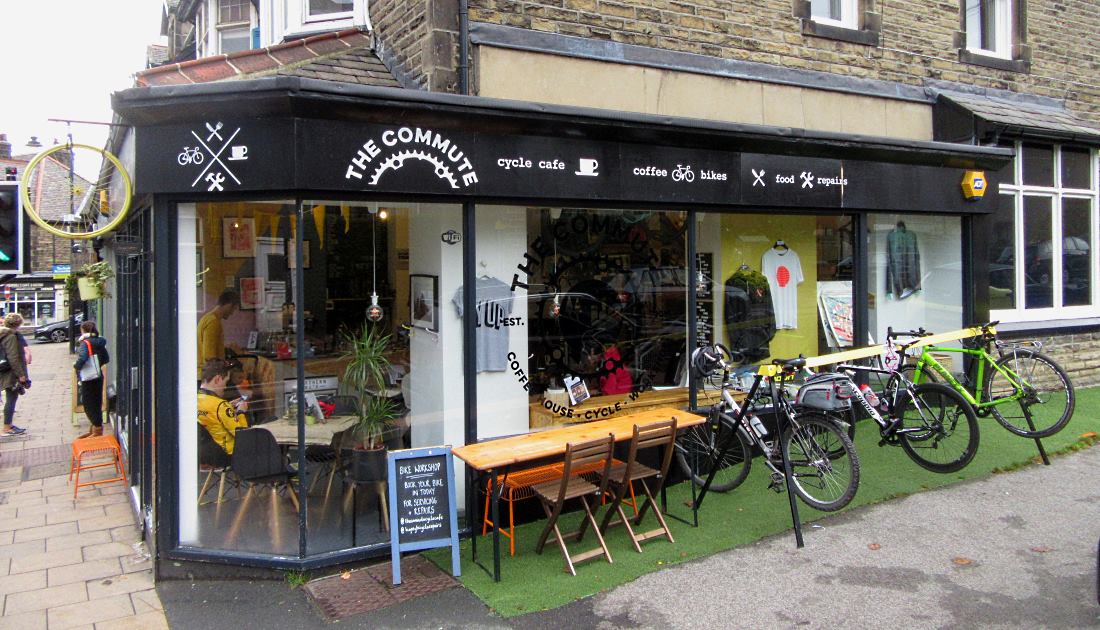 So. Anyway. We hurtled down to Ilkley, enjoying the nice proper road surface, which took us as if predestined to The Commute, a chic cycle-cafe humming with friendly local riders (pic). Ikley itself is a handsome town with many fine Victorian buildings, spiffy enough to have a branch of Bettys, down-to-earth enough to have a Wetherspoon, and a real cycling hub: the lanes round about seemed to sport as many people out for a spin on their road bike as there were motorists.

I would have snapped some of them, but it was now pouring down with that unpredicted rain. I did manage to get a shot back towards Ilkley Moor itself (pic). Cold and windy up there: as clothing bores are wont to say, though, no such thing as bad weather, only inadequate headgear. 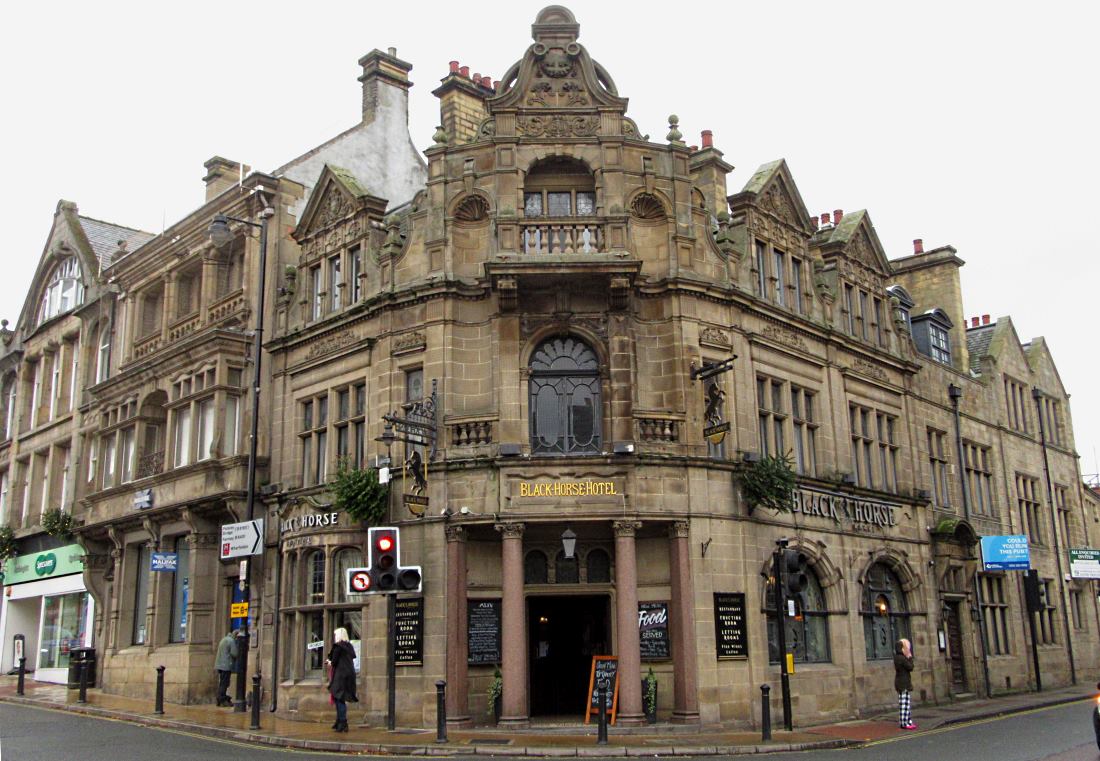 En route back to Leeds I briefly visited Otley, which also has some fine Victorian buildings (pic) and a rather super local bike shop chain, Chevin Cycles, though with rather too few bikes that have mudguards and racks for me. From here it was a long tedious climb up and over the hills back down to Leeds, and the train home.

About 45 miles cycled in the day, on a variety of surfaces: a nice workout for my trekker. I raised the handlebars the other day with a bolt-on stem-riser widget I got for a tenner from eBay, and the more upright riding position makes it delightfully comfy for routes like this. I feel sorry for people that don’t cycle, because they’ll never know the sheer bliss of this sort of thing. Or the simple joy of a post-ride pint.

Then again, they won’t get their ear bent by a bloke in the pub who spots your bike, comes over and drones on about their Dawes Galaxy for half an hour, which is what happened to me.

That’s wheear we get us ooan back… Yorkshire karma, perhaps?