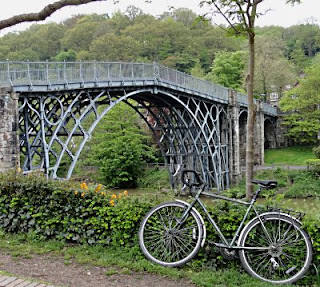 They were feeling their way with engineering, too. The picture shows some primitive, heavy, clumpy metalwork done on the cheap. But then, it’s my bike, and I like it.

After a morning exploring the various overwrought ironmongery spanning the Severn (there’s another bridge at Coalport) I cycled up the Silkin Way to Telford, a new town which consists solely of ring roads and shopping centres. 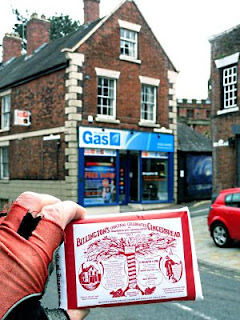 Market Drayton, I was surprised to learn from its welcome sign, is Home of Gingerbread. I asked the friendly locals (hello Emma! See you in New Zealand!) and discovered that (one form of) gingerbread was indeed invented here, by Clive of India. The genuine stuff (picture) used to be made in this house (same picture) which is now home of Shropshire Gas; the authentic product is now made in Barnsley, and the proper way to enjoy it is apparently to dunk it in port, which sounds a very good idea. 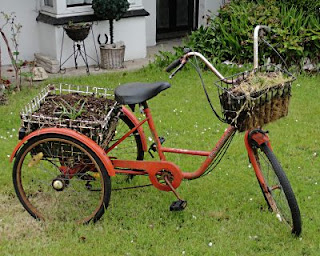 Then I saw this tricycle (picture) serving as a novel planter in a Nantwich garden. 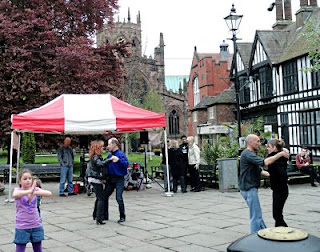 Nantwich is clearly a bit posher than Market Drayton. To celebrate the fact, the locals were literally dancing in the streets (picture). 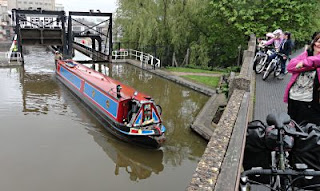 After catching the astounding Anderton Boat Lift in action just up from Northwich (picture) I cycled in the drizzle to Warrington, where my longtime cycling chum Si whisked me by car to Wheelton for a fine sociable evening with Sue and their friends Alan and Barbara. A sociable day all round.