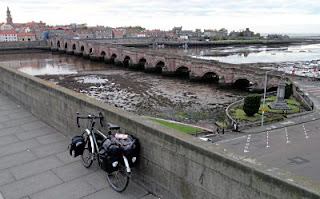 I cycled the handful of miles from Holy Island to Berwick, with its characteristic rust-coloured ancient bridge over the Tweed (picture), at dawn. The ancient walled city changed hands over a dozen times between England and Scotland over the last few centuries, presumably as both sides were trying to get rid of it. 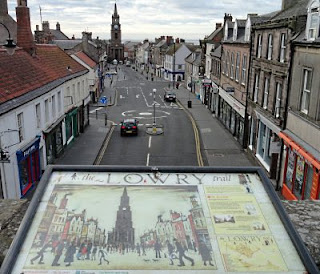 I didn’t realise that LS Lowry was a fan of Berwick. One of his paintings is reproduced at Scots Gate in front of the view it depicts (picture). You can see that little has changed. It was full of boarded-up shops then too. 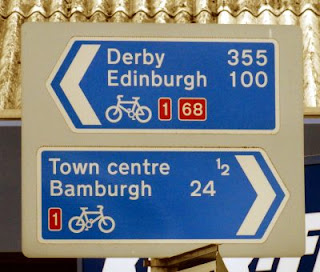 I was intrigued to see this sign (picture) for the Sustrans route. It’s a surprise to see a destination with a mileage like a cricket innings total, rather than one that’s not even a New Zealand innings total. 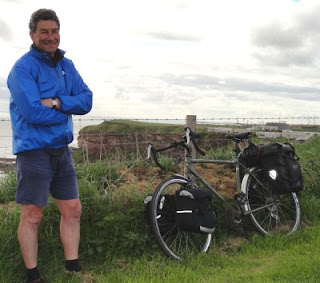 The completion of the English End to End came at 8am in a caravan park a few miles north of Berwick (picture) called Marshall Meadows. This is the furthest north in England you can cycle on bridleways, and is just north of where the A1 crosses the Scottish border to the east. That particular point is marked by a ‘Border Viewpoint’, which consists of a marker stone, flags and a burger van.

That caravan-park point therefore marks the Completion of the English End-to-End.

From there it was a long tedious day to Dunbar, for the start of Dunbar to Stranraer tomorrow. I spent hours toiling against a nasty headwind and making little progress. Having to pedal downhill (picture) doesn’t seem fair. At least I was rewarded with the view of Torness nuclear power station, and what I thought was a ruined abbey to its left. It was actually Dunbar cement factory.