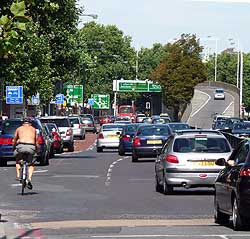 In this series of posts, I’m cycling the streets and properties of the classic UK Monopoly game board.

The only south London property on the board, Old Kent Road runs for about a mile and a half from the Bricklayer’s Arms roundabout (right), with its flyover, to New Cross Road.

Chaucer’s pilgrims travelled this way en route to Canterbury. OKR is mentioned in Chaucer’s draft for ‘The Cykelist’s Tale’, which never made it into Caxton’s final printed version: “This dredeful streete, wyth foule pubs and flyover, / That hath not cykel parke from here unto Dover”. Now it’s the A2. 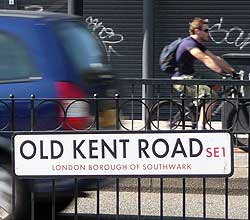 OKR is a fast arterial road, busy with lorries and traffic, and isn’t much fun to cycle down. There are no bike-convenient parallel routes, though, so you won’t be the only cyclist warily dodging the taxis, HGVs and frantic private cars. It’s lined with retail parks – Asda, Aldi, Comet, PC World, Halfords, B&Q, that sort of thing – but bike parking is dismal in the car-park steppes, including what may be London’s most comically-positioned Sheffield stands. 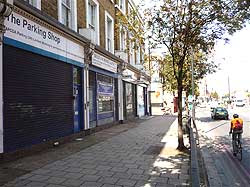 There quite a few shops. If you’re looking for a pavement cafe culture you may be disappointed, though if you’re after a nail makeover, tasteless piece of fried chicken, or salvation via a charismatic church, you’re in business. With pleasing irony, OKR is home to the Parking Shop (where you buy Southwark resident parking permits), but there’s nowhere to park a car (right).

OKR’s not the most rewarding leisure cycle, but there is one of London’s quirkiest landmarks a few yards from its start, at the Bricklayer’s Arms. On Page’s Walk, off Mandela Way, is a T-34 tank. Part of the fleet used to crush rebellion in Prague in 1968, it was bought and installed by a local property developer in frustration at his not getting planning permission to build on it. The gun turret, it’s said, points to the council offices. (There’s also a Follower-of-Banksy mural behind it.) Cyclists who have just had another close call with a lorry may well feel that a tank would be a more appropriate way to travel the Old Kent Road.

Monopoly’s Old Kent Road costs £60. What could this buy you there? You could stock up at Halfords with a cheap and cheerful bike jacket, waterproof trousers and bike computer, and still have enough change for chicken and chips – if you can find somewhere to park your bike.