This is one of the strangest tarmac roads in Britain: a 22-mile long single-lane cul-de-sac that simply stops dead at the end of Britain’s most fjord-like loch, many miles from anywhere. I rode it today, with my chum Gary. 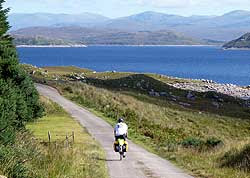 It’s the road from near Invergarry, on the Great Glen Fault in northern Scotland, to Kinloch Hourn, at the top of Loch Hourn on the epic west coast.

It’s an astonishing cycle experience: three hours of quite awesome, remote scenery (right), with the road entirely to yourself. On a sunny day, like we had last weekend on our trip there, the panoramas are awesome: cobalt-blue lakes, royal-green hills, polished-mahogany sheep turds. 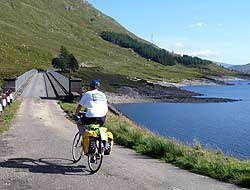 Apart from a handful of walkers heading for the virtually roadless hiking wilderness of Knoydart, and the odd service vehicle for the hydroelectric dam on vast Loch Quoich (right), you’ll see no traffic at all.

Kinloch Hourn itself has a campsite, one B&B, a cafe which may or may not be open when you’re there. Your chances of mobile phone access are as narrow as the road in its long, steep ascent away from the shore.

The prospect of cycling over 22 miles solely in order to turn back may not be attractive to everyone, but there are two ways to include the remarkable road in a linear trip. (We did it west to east to follow the tailwinds.) 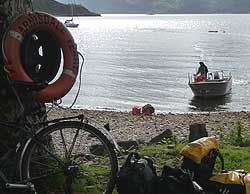 The first is to cycle the rough but rewarding old pony track between the village of Corran and Kinloch Hourn. (The journey to Corran is a major undertaking in itself, probably involving a train to Mallaig, ferries to and from Skye, and a ride round the spectacular coastline of the Glenelg peninsula; or train it to Kyle of Lochalsh and cycle up and over the 350m Ratagan pass to Glenelg.)

On a sturdy mountain bike that’s no problem, but probably too uncomfortable on a road-touring bike with panniers. You’ll bruise your bananas. 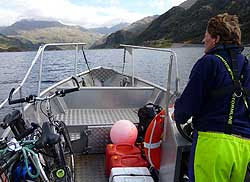 So your second option is to get Billy Mackenzie’s by-appointment Arnsidale Ferry (above and right) between Arnisdale (next to Corran) and Kinloch Hourn (or wherever else you want him to take you). It’s a half-hour trip on a thrillingly fast iron tub of a boat along a jaw-dropping sealoch, between the Glenelg and Knoydart peninsulas. It’s reasonably priced too, especially given the remoteness and convenience (think of it as a water-taxi). 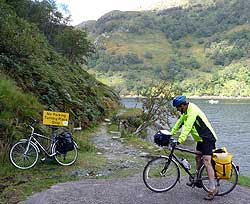 Once dropped off at the jetty near Kinloch Hourn, you can admire the very end of Britain’s longest no-through-road (right), where it turns into a walking track. 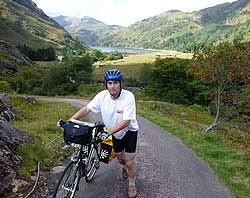 Then you can cycle the extraordinary 22 ½ miles back to civilisation (ie pub) at Invergarry. The first mile or two is a steep uphill (right), too steep to cycle for most; from there you have no major climbs, and the trend is downhill after Loch Quoich.

The oddest thing about this deadest of dead-end roads though is its lack of warnings where it starts, from the A87 in Glen Garry. Not even a ‘T’ sign, never mind Caution This Road Is 22 Miles Long And Goes Nowhere.

Ah, another metaphor for life.