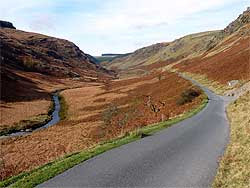 The Abergwesyn Pass (all pics), which bucks and rolls twenty miles between Abergwesyn and Tregaron across a remote part of mid-Wales, is one of the most scenic and spectacular roads in England and Wales. Last Monday was perfect weather for one of the country’s most knackering cycle rides, sunny and dry but not hot. The three-hour traverse includes three big climbs totalling 600m (the easternmost being the infamous Devil’s Staircase). They’re counterweighted by similarly precipitous roller-coaster downhills, the final catapult west into Tregaron being particularly enjoyable.

You have the road virtually to yourself. I did literally, because a bridge in the middle north of Dolgoch hostel was being replaced, making the central few miles closed to traffic (which was diverted a long way round via Soar y Mynydd). I could wheel my bike across a temporary footbridge, waved through by cheery blokes in hard hats. 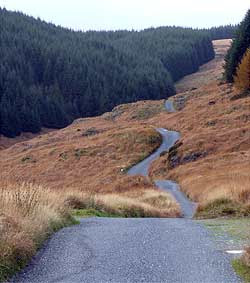 Rail access is relatively convenient, though not for anyone in a hurry: I travelled to Llanwrtyd Wells station on the Swansea-Shropshire line, from where it’s a flat valley-floor trundle to Abergwesyn.

There are two hostels in Elenydd, both basic and remote bunkhouses accessible via very rough tracks: Dolgoch and Tyncornel, where I stayed convivially with some equally intrepid fellow travellers.

Back in London, within ten seconds of cycling away from Paddington, I’d already had a close encounter with a taxi. I hope he didn’t understand Welsh.